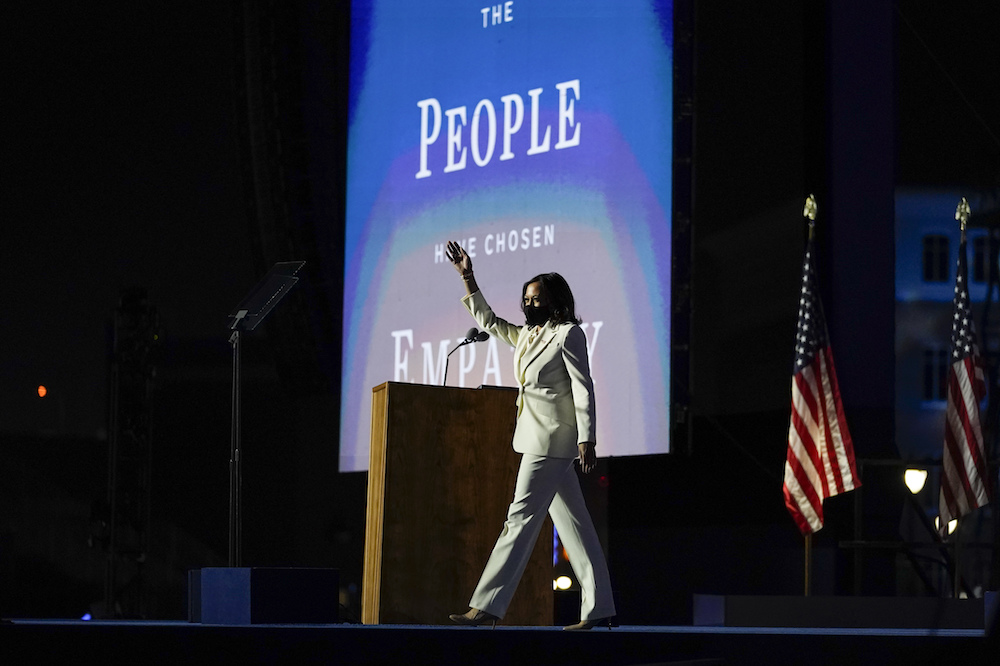 Vice President-elect Kamala Harris readies to address the nation after she and Joe Biden were declared winners of the 2020 presidential election. Courtesy of Carolyn Kaster/Associated Press.

As Kamala Harris readies to take the oath of office this January, she does so knowing that she will be the first woman, the first Black woman, the first Asian American woman, and the first daughter of immigrants to be elected to the White House. And while her victory stands on the shoulders of many American feminists, looking at the activism of women of color around the world, especially over the past decade, is crucial to understanding both the importance of Harris’s election and how it became possible. Black and Brown women have been laying the foundation for the intersectional feminism that is taking hold in the U.S. and across the globe. Vice President-elect Harris’ win is a result of decades of transnational feminist activism, led by women of color, that have brought together women of all backgrounds.

Harris herself called attention to this in her acceptance speech. “When [my mother] came here from India at the age of 19, maybe she didn’t quite imagine this moment,” said Harris, clad in suffragist white that historic night in Wilmington, Delaware. “So, I’m thinking about her and about the generations of women—Black women, Asian, white, Latina, and Native American women, throughout our nation’s history, who have paved the way for this moment tonight.”

The momentum that brings Harris to the White House has been building globally for over a decade; it just hasn’t been spotlighted. Moreover, the success of what I call the “Feminism ReBoot”—a new approach to feminism rooted in collaboration and supported by new forms of digital connections—has both been inspired by and inspired successes around the world. Like the roots of a powerful tree of change, local feminist networks have been reaching out to sister movements across the globe to create robust transnational feminist networks that build on the momentum of one another. We can trace the roots and branches of #MeToo in the U.S. to feminist movements such as #BringBackOurGirls in Nigeria, #MyStealthyFreedom in Iran, and #NudeBloggersofEgypt.

Notably, women’s movements in Guatemala and Chile have seen major milestones in the last two years alone, as feminist groups have come together to propel change and enact legislation in order to provide more rights to survivors of sexual violence. In February 2016, a Guatemalan court prosecuted two former members of the military for harrowing acts of sexual violence committed decades ago. In a historic ruling for rape survivors in Guatemala, two male suspects were found guilty of crimes against humanity for sexually abusing 15 Indigenous women and sentenced to a combined 360 years in prison. This victory encouraged more women to come forward and denounce their abusers.

Today, numerous women’s groups across Latin America are also working on changing restrictive abortion laws. In August 2017, a Chilean women’s movement known as Mujeres en Marcha Chile advocated for the passage of a new law that legalizes abortion under certain circumstances. This law was a major victory for women who have been pushing for abortion rights for decades, and it signaled that the door was now open for further reform. This month, Argentina followed suit with official approval to legalize abortion—a battle that a group of intergenerational and intersectional feminists has been waging for decades. Pumping fists clad in green handkerchiefs, activists took to the streets demanding reproductive choice, having organized through social media and underground networks.

Transnational feminist networks across the globe passed along strategies of success from Latin America to Asia. In India, a number of concerted movements and organizations fighting everyday sexual harassment and laws that target women’s morality came to a head in 2012, when the violent gang rape of Jyoti Singh on a bus resulted in her death. The outrage over this incident brought Indian women together to strategize for larger change. They began by organizing to bring down politicians who had been involved in sexual harassment. Over the next five years, the climate of India’s Supreme Court changed significantly, in no small part thanks to these efforts.

On September 6, 2018, the Supreme Court voted unanimously to repeal Section #377, a colonial-era law that criminalized homosexuality. The decision was met with absolute jubilation in India and served as inspiration to many activists around the world suffering from battlefield fatigue in the push for sexual and gender rights.

The momentum that brings Harris to the White House has been building globally for over a decade; it just hasn’t been spotlighted.

In South Korea over the past five years, women’s movements have been slowly gaining strength. #MeToo infused these movements with a new energy, and they have served as catalysts for large-scale reforms. The 2016 murder of a Korean woman exiting the bathroom at the Gangnam metro station inspired women to take to the streets in protest of sexual violence and assault. While these protests invited significant backlash, resulting in numerous women losing their jobs and being ostracized from their communities, they also inspired many more women to speak out and join in ongoing protests.

Notably, in January 2018, Seo Ji-Hyeon, a well-known prosecutor, went public with the accusation that a former Ministry of Justice official groped her at a funeral in 2010. It became a watershed moment––between January and April 2018, hundreds of other women came forward with their stories. In March 2018, presidential candidate and Governor Ahn Hee-Jung resigned after he was accused of raping his secretary. Later that month, thousands came out for a marathon protest during which 193 women spoke for 2,018 minutes straight about their experiences with sexual assault. The event was significant in its magnitude as well as its location; it took place in the same area where, in 2017, thousands gathered for a mass candlelight demonstration against the now ousted president. South Koreans know the power of protest. And in April 2018, Korean President Moon-Jae addressed the #MeToo movement by publicly calling for a societal shift, specifically within corporate culture.

In the Middle East and North Africa, countries where women’s rights are thought to be limited, feminist organizing, and the transnational feminist networks, have had significant successes. Consider Nigeria. After the extremist group Boko Haram kidnapped more than 200 schoolgirls in April 2014, Nigerian activists took to social media, launching the #BringBackOurGirls campaign to bring worldwide attention to the plight of these girls and advocate for their release. The campaign was so successful in raising awareness that people across the globe, including Michelle Obama and the Pope, spoke out against the kidnappings. Through transnational collaborations, more than half of the girls have been returned, and Boko Haram, which could have been a major threat throughout the continent, has been contained.

In Tunisia, many women experienced physical and sexual assault, arrest, and even exile because of their prominent role in the Arab Spring. Nonetheless, they persisted and opened a new dialogue on women’s rights while also working toward regime change. Tunisian activists’ success has inspired a domino effect throughout the region. And while the changes feminists have been pushing for in part via social media and transnational collaboration have been incremental, the climate is shifting.

While we do not yet know the longer-term results of these movements, what all of them have in common is their fierce commitment to inclusive collaboration and to embracing and harnessing the power of intersectionality. Success inspires success, and their strategies and unrelenting activism have without a doubt moved the needle. In our globally networked world, women can quickly and easily hear about the victories of other women both at home and in faraway countries. Inspiration goes viral—the momentum of one movement leads to another.

Here in the U.S., these transnational women’s movements also inspired—and were inspired by—the Women’s March, which began as an American response to the election of Trump but quickly became global. In January 2017, millions of women marched in major cities on every continent. The anniversary marches have drawn millions, from Paris and Delhi to Nairobi, Cape Town, and Tbilisi, as organizers called on marchers to bring their #PowertothePolls. These marches—led by women of color—involved women who previously had not felt willing or able to engage with political processes, and increased the visibility of women’s political action.

The tidal waves of feminist activism, drawn from around the world, helped President-elect Joe Biden understand the power of choosing not just a woman, but a woman of color as his running mate. The election of Harris, a Black, Brown woman who is the daughter of immigrants, is a victory for the global struggle for a new, more inclusive and intersectional feminism.

While today we are witnessing the rise of autocracy and patriarchy around the world, looking closer, we can also see resistance to these forces growing and apathy decreasing. There was higher voter turnout in the U.S. this year than ever before, and a significant inspiration was Harris herself. And while we have to acknowledge the failures and slippage of resistance, we can also celebrate the power of the momentum that is pushing back, and how networked this power becomes across oceans and divides.

As the roots of Harris’s victory are important to acknowledge, so too are the branches that her win has already sprouted around the world. While Harris drew strength from global movements, her win has also inspired weary activists around the world to keep calling for progress. Their successes will only be amplified by social media—and will lay the groundwork for further reform for women around the world, and for generations to come.