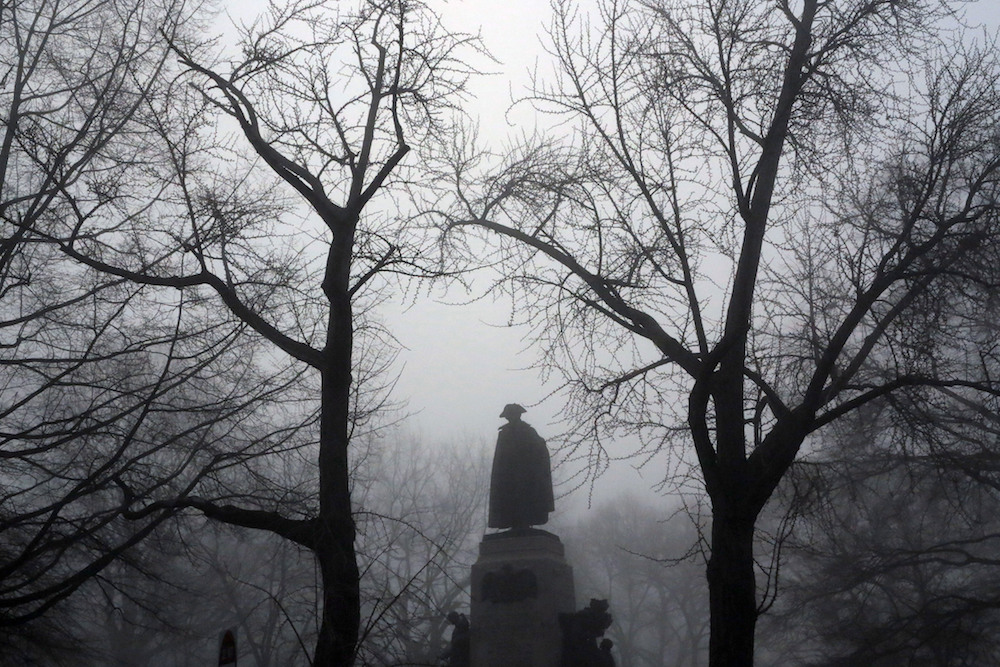 Much of the Polish American community didn't respond to the Black Lives Matter protests until protestors vandalized the statue of Tadeusz Kosciuszko in Washington, D.C.’s Lafayette Park. Courtesy of Jacquelyn Martin/Associated Press.

I march in the anti-police brutality protests in New York following the killings of George Floyd and Breonna Taylor.

These aren’t my first protests—far from it. As the child of Polish American immigrant activists, I was raised on this form of expression. Even before I understood Polish politics or why we were marching, my community taught me to fight for freedom from tyranny.

But during these protests, my community has been silent. And that pains me tremendously. I find I can no longer reconcile the values I was raised with, with a lot of what I’m seeing in my community today.

I think back to my first protests, in search of understanding what went wrong.

I am 8 years old. It’s December, and the wind whips off Lake Michigan and snow crunches under my cold feet. Our small group slowly walks in a circle. The adults carry signs and chant in thick Polish accents: Stop Red Terror. We are in front of a gray stone building. All the curtains are pulled closed. Round and round we go.

My 5-year-old brother walks next to me. Sometimes we join in the chants and imitate the accents: Stop Ret Terro. Every once in a while, we get to warm up inside a van, where adults give us hot tea. And then back outside, back into the circle we go.

We return often to march in front of this building. It is called the “consulate.” Polish people work in it, but they don’t want Poland to be free. The Polish flag hangs outside, but the eagle that flies on it has no crown. It’s supposed to, though, my dad tells me. “The communists took the crown off the Polish eagle,” he says.

Martial law. I see the phrase in papers. I watch grainy footage of a balding man explain why it is necessary. I overhear things when the adults come to our house at night. “Arrest” and “show trial.” The adults are angry that the balding man lies so much.

In the spring, the protests get louder. By the summer, there are so many people that I get lost in the crowd.

Someone picks me up and hoists me onto a newspaper stand. There’s a bus stop sign above it that I conk my head on. When I start crying, a woman sees me and calls out: “Don’t cry, little one. Someday Poland will be free.”

That fall, an activist priest in Poland is kidnapped and killed by three police officers who are in the “secret police.” The next protest at the gray building is silent. People hold candles, and the priest’s photo.

The priest has a kind face. I look at all the faces around me. So many are crying.

Stop Ret Terro. Because terror it was. Life in post-World War II Poland was grim. One-fifth of the country’s citizens—mostly civilians—had perished during the war, including 90 percent of its Jewish population. Poland’s infrastructure was devastated: the capital, Warsaw, was bombed so heavily that it was nearly leveled. The economy struggled to stabilize.

The communist yoke, imposed by Soviet influence, never took. Anti-government protests and strikes began in the 1950s and intensified in the 1960s and 1970s. The more Poles protested, the more the Soviets clamped down. The economy bottomed out. There were regular power outages and shortages of everything, from food to manufacturing equipment.

My parents, who were born in Poland in 1943, were raised on a regular diet of propaganda about amazing Mother Russia, and terrible capitalist America. They met at music school: My father studied piano and jazz, and my mother musical theory. Artists got special privileges, including travel to places like Siberia and Sweden. And then, to America. My dad went first, traveling on an extended artist visa in the mid-1970s, to play in Chicago jazz clubs. My mom and I followed half a year later.

Politics were heating up back home, where an economic recession threatened to throw Poland into bankruptcy. Poland’s Solidarity movement, which emerged from the first independent labor union in the Soviet bloc and became a 9 million member-strong anti-communist social revolution, was in full swing, and striking workers demonstrated in the streets. In what would be their last-ditch effort to regain control, in December 1981 the communist government declared martial law and imposed severe restrictions on everyday life: no gatherings, no protests, no inter-city travel, wire taps in public phone booths, a complete media blackout, a curfew monitored and enforced by military tanks and military units. Thousands of activists were thrown into prison without charges. Some were killed.

When the authorities declared martial law, my parents were among the first protestors in Chicago. They had earlier started an organization, Pomost, which means “bridge.” Now, people were always at our house, talking into the night about who was arrested back home, who was freed, and who the communists were spying on now.

We marched and protested for two years, until martial law was lifted and Poland was free again. For years after that, we watched the country pursue a liberal, progressive, pro-democracy and pro-EU agenda, achieving economic stability and growth. Once an adult, I went to work for the Polish Embassy in Washington, D.C., launching a social media program that was rolled out to all the Polish diplomatic missions around the world—including the Polish consulate I’d marched under when I was a child.

I made videos, unearthed never-before-seen photos of the embassy at the Library of Congress, and interviewed all the interesting people—film director Agnieszka Holland, for one—who came through the embassy. I loved sharing Poland’s history and its innovative present, and poured myself into the work.

Duda and the ruling party preach strongly nationalist, anti-immigrant, anti-Semitic, anti-woman, and anti-Other rhetoric. Their policies follow suit. Parliament proposes a strict anti-abortion ban in 2016. The ban does not pass—tens of thousands of women across Poland march in protest, holding wire hangers—but in fall 2020 the government issues restrictions on abortion anyway. Polish women around the world again take to the streets. As of this writing, they are still protesting.

Also in 2020, the loudly pro-Trump Duda declares in his re-election campaign that LGBTQ+ is an “ideology more dangerous than communism” that must be stamped out. Same-sex marriage and civil unions are illegal in Poland, but hate speech gets a free pass. Nearly 100 small cities across Poland declare themselves “LGBT-free zones.” “Beware the rainbow plague!” the Catholic archbishop of Krakow thunders.

Many people protest this, too. The EU chimes in, warning about the dangers of this rhetoric. Still, Duda is re-elected. The majority of Polish Americans with dual citizenship who participate in the Polish elections vote for him.

In America, we’re having our own issues. I march and protest—and this time I know exactly why and what for. As I kneel at a silent vigil for Breonna Taylor and George Floyd in Brooklyn this summer, I watch as a mother cradles her young son. Tears stream down my face as I think about the people who want to harm him because of the color of his skin.

I obsessively scour for news of any response to BLM from the Polish American community. I see nothing until May 2020, when a monument of a Polish general gets defaced in Washington, D.C.

This general, Tadeusz Kosciuszko, was one of the good ones. In 1776, he escaped Poland and joined the American cause during the Revolutionary War, acting heroically at the Battle of Saratoga and designing the defenses at West Point military academy during the height of the Revolutionary War. He was a buddy of Thomas Jefferson who despised slavery; the two had a lengthy written correspondence, in which Kosciuszko tried to persuade Jefferson just how loathsome slavery was. In his will, Kosciuszko left his fortune to Jefferson and begged Jefferson to use it to free the enslaved people at Monticello. Jefferson, as we know, did none of that.

During anti-police brutality protests after George Floyd’s killing, some people spray paint Kosciuszko’s statue, as well as the other statues in Lafayette Park, in front of the White House. BLM tags, an anarchy symbol or two.

A Polish reporter tweets about it. He stands under the Kosciuszko monument and asks passers-by if they know who Kosciuszko is (they do not). His feed and a subsequent article race through the Polish American community—which loses its collective mind.

Not because a man was murdered by police. Not because a woman was shot to death in her own bed. Not because the president of the U.S. uses the same authoritarian tactics they once fled: tear gas, overzealous police in riot gear, a staged photo op in front of a church. Not because the people being targeted are our neighbors, our friends, our colleagues, our family.

No, Polish Americans are upset that this monument—“Our monument! Our compatriot! Our hero!”—got spray painted. They have a lot to say about it. I see countless social media posts, emails, and news articles complaining about “desecration.” There are condescending denunciations of the American educational system: “What are we teaching our youth if we aren’t teaching them about Kosciuszko and his values?”

The Polish ambassador piles on via Twitter. The Embassy of Poland in the U.S. retweets and agrees. When I worked at the embassy, I started that Twitter feed to highlight the embassy’s diplomatic work, and to share interesting Polish cultural and historical tidbits—photos from events, gorgeous artwork and furnishings from the embassy building. Now I scroll through the comments and see hatred and condemnation for the protestors. I feel nauseated as I see the n-word, over and over again.

I try to engage with people on Facebook, gently attempting to steer the conversation toward the ideals he fought for and his anti-slavery stance. But most people cannot connect what is so clear for me: Kosciuszko hated slavery. What’s happening now is an extended form of slavery. Kosciuszko would have spoken out against it. We should too.

Many Polish Americans support Donald Trump, joining a number of immigrant groups who embrace his rhetoric. Many come from communities for whom the word “communist” is anathema, and Ronald Reagan was a saint. These groups readily believe messaging that Democrats will usher in socialism—a concept which remains murkily undefined, but is irrefutably Bad and Wrong.

To me, what’s truly Bad and horribly Wrong is turning a blind eye toward the suffering of oppressed groups and individuals, and undermining the foundation of American democracy. I learned my ideals from my parents and their protester friends; from Polish scouts, Polish-language school, Polish books and movies and conversations. Truth above all. Freedom and honor. Worth based not on religion or race, but in how you move through this world. The right to dissent; the right to speak out. The courage to stand up to hatred and bigotry. The fortitude to help others: to not just empathize with those who suffer, but to help them in their struggle. To protest and march with them, like we once did. To fight against authoritarianism, like we once did.

I cannot reconcile my community’s past and its present. BLM protests continue, and the Polish American community remains silent, hiding inside that gray building, curtains tightly drawn.

Outside, people are protesting and screaming. Human rights are being trampled. But the tags and graffiti are gone from the monuments in Lafayette Park. The statue is clean.