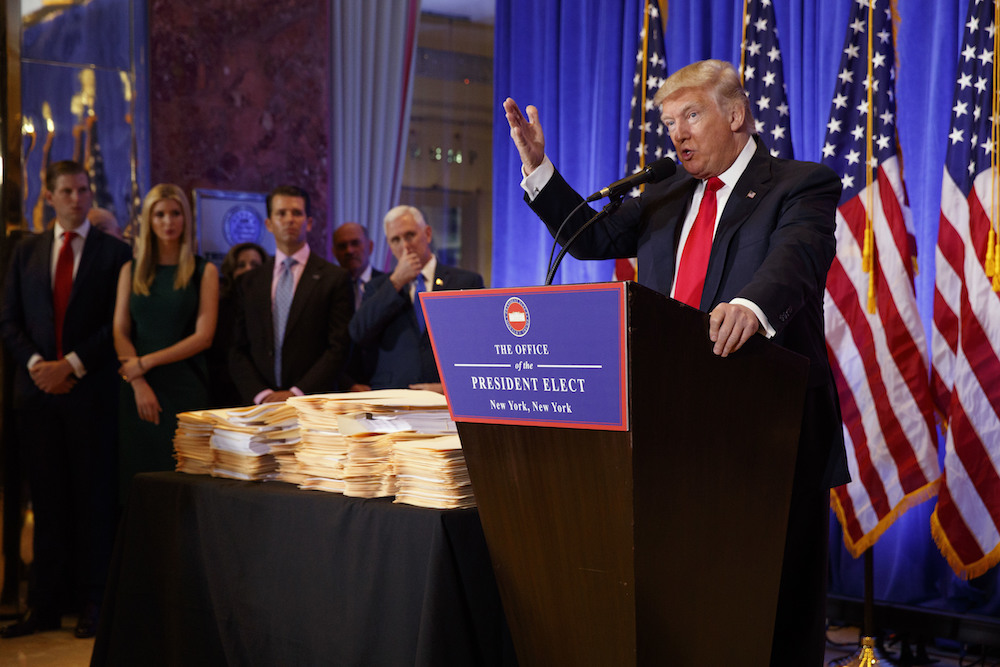 On January 11, 2017, President-elect Donald Trump stood in front of stacks of files and claimed he had a plan to avoid any conflicts of interest as president. Courtesy of Evan Vucci/Associated Press.

Trump didn’t have any actual proof of election fraud—at least not any that would stand up in a court of law. Trump instead offered his supporters conspiracy instead of proof, urging them to “show strength” by believing him and taking action against their shared enemies.

Such rhetoric was not new or unusual for our outgoing president. To the contrary, this approach is at the heart of his political career, the most telling moment of which occurred almost exactly four years before the mayhem of his final week in office.

On January 11, 2017—nine days before his inauguration, and five days after the U.S. government released a report accusing Russia of attempting to “influence” the 2016 election in his favor—Trump held his first news conference as president-elect. Surrounded by an audience of family and employees who provided a laugh-track for his performance, the president-elect stood next to a table overladen with manila folders and assured the nation that he had separated himself from his business empire: “These papers are just some of the many documents that I’ve signed, turning over complete and total control to my sons.”

Trump promised that the papers proved that he and his businesses wouldn’t profit off the presidency, but when reporters asked to examine the evidence, the folders and papers appeared blank. Not for the first time nor the last, Trump had offered props instead of proof.

Such theatrics are baffling to scholars of serious presidential rhetoric, who expect presidents to provide credible evidence to support their claims. But Trump makes more sense when you think of him not as president, but as demagogue. Trump is a new kind of demagogue—part entertainer and part authoritarian, he is a demagogue of the spectacle.

French critical theorist Guy Debord coined the phrase “society of the spectacle” in 1967, using the term “spectacle” to denote a moment in history when representation had replaced direct experience as our epistemology—as our way of knowing. Earlier in the 20th century, he explained, we knew things because we experienced them directly (and one’s sphere of information and influence was necessarily very small). But by the second half of the 20th century, we had expanded our sphere of information to such an extent that we knew things only because we learned about them from media sources—most, if not all, of our knowledge had become mediated by others.

What was worse, to Debord, was that this new knowledge was commodified. It was a part of the capitalist system of production and distribution, which meant that it was always only partial knowledge. What was “true” was limited to what would sell.

This is the essence of Trump’s epistemology: “Truth” is merely what he can sell.

Like an authoritarian P. T. Barnum, a con man who used hyperbole to profit off of our curiosity, Trump has used stagecraft, suspense, and outrage to keep us all engaged and on tilt, and thus to dominate our public sphere–no small feat in an attention economy like ours.

Debord was talking about television and newspapers and magazines. Fifty years later, the spectacle has expanded into our computers and our phones, following us everywhere and erasing all private, non-spectacular space. The spectacle’s dangerous demagogue has used the power of social media and the tactics of weaponized rhetoric and propaganda to set the nation’s agenda, confuse political debate, and marshal supporters to defend their positions and overwhelm opposition. Trump plays the spectacle for what it is. He is its creature, its essential qualities.

If we put Trump’s demagoguery into a spectacle frame, we ask different questions than if we judge him based on whether or not he is a good president, offering good arguments and solid proof for his positions or doing what’s best for the country and its people. As a spectacular demagogue, Trump uses strategies that he thinks will make great or compelling TV and dominate the news cycle. He asks: What will attract attention? What will divide people into teams to cheer for (or boo against) the story’s main character, me? What kinds of plots will distract from other stories? Just like any other brand or app or electronic device, Trump has engineered his demagoguery to gain and keep our attention.

Trump read the rhetorical landscape better than anyone else during the 2016 election. He saw that the nation’s crisis levels of distrust, polarization, and frustration made Americans vulnerable to demagoguery. So Trump used rhetorical strategies like ad hominem attacks, threats, and conspiracy theory to attack our public sphere, attacking America. Those strategies are authoritarian. Trump’s rhetoric is a kind of force; it’s based on authoritarian compliance-gaining rather than on democratic persuasion.

Like an authoritarian P. T. Barnum, a con man who used hyperbole to profit off of our curiosity, Trump has used stagecraft, suspense, and outrage to keep us all engaged and on tilt, and thus to dominate our public sphere—no small feat in an attention economy like ours. The showman’s rhetorical strategy is a legerdemain—a sleight of hand. Part of Trump’s success was that he dominated the conversation by saying things so outrageous that we could not look away and had to respond. It’s no surprise that almost exactly a year before Trump’s first news conference as president-elect, he told Chuck Todd on Meet the Press that he enjoyed being compared to P. T. Barnum. “We need P. T. Barnum, a little bit,” Trump said, “because we have to build up the image of our country.”

Yet while Trump wanted our attention, he did not want our scrutiny. Like any showman or other dangerous demagogue, Trump didn’t want to be held accountable for his words or actions.  He didn’t want us to examine his rhetoric—or his folders—too carefully. Trump would trivialize concerns about his rhetoric as mere “political correctness” or “women trying to control how men speak” or “so unimportant.” Of course, he would also say, “I have the best words.”

He always claimed that he was just telling it like it is, but he never allowed us to examine his “proofs.” He promised us that he’s “really smart” and a “genius,” but he didn’t release his high school or college transcripts. He claimed that he was “really rich,” but he didn’t release his tax records. When Congressional Democrats asked to see documents or hear testimony for oversight purposes, he refused. He never told us why he made an emergency visit to Walter Reed hospital in 2019; when he contracted coronavirus, he never told us when he last tested negative for COVID-19 or when he first tested positive. Who knows what else he hasn’t told us?

Like a good showman, Trump has developed a repertoire of tricks to prevent the audience from seeing reality. Non-disclosure agreements, lawsuits, retribution, and humiliation silence would-be whistleblowers from telling the nation what they know about his authoritarian circus. Trump’s 21st century version of P. T. Barnum doesn’t mind resorting to force to make sure that his preferred view of “truth” will sell.

We are especially attracted to characters like Trump during times of great transition when we feel alienated and confused, and reality can be more easily distorted. Part of the showman’s strategy is to confound the public so that audiences are more likely to be misled, making it that much easier to sell their “truth.”

Voters ultimately held America’s authoritarian P. T. Barnum accountable by voting him out of office, denying him a second term. A record 81 million Americans voted for President-elect Joe Biden, but Trump is still trying to deny reality, still using his props to sell Americans on his version of “truth.”