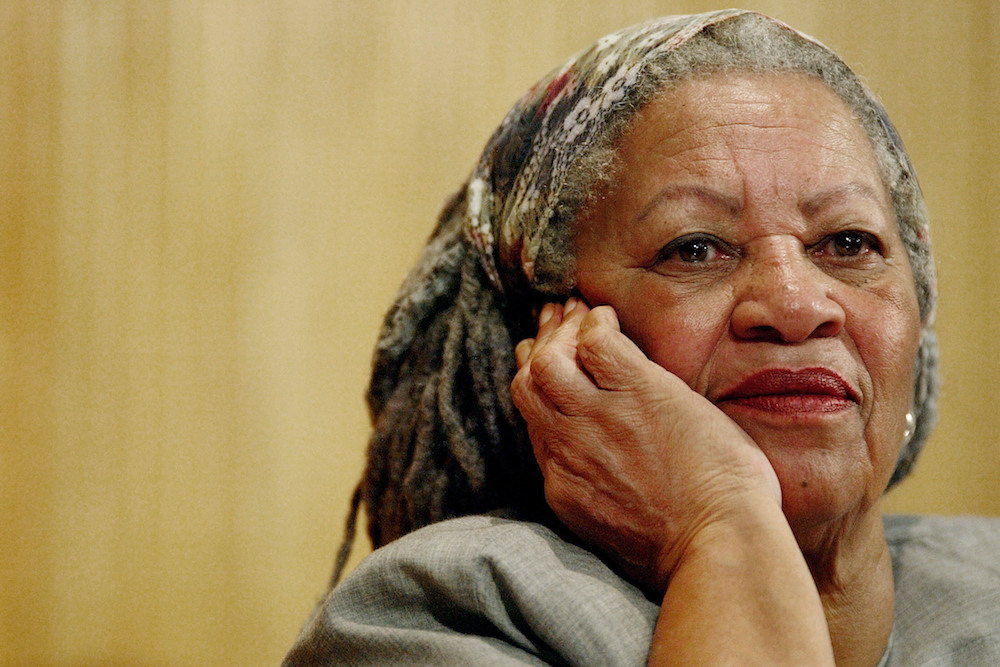 Toni Morrison bore witness to the lasting legacy of slavery through her writings. Courtesy of Guillermo Arias/Associated Press.

For a long time, I cringed whenever I heard someone talk about a novel or a poem bearing witness. The word “witness” bothered me. It felt hollow and privileged. It felt like something an entitled American writer would say, a writer who could author a book and walk away. I was not that person, or at least I didn’t want to be.

And I was not the only one who had reservations. The poet Natalie Diaz observed in an interview that “bearing witness” is a curious phrase. “Most people don’t bear it at all,” she said. “They just look, they just look with their eyes and write with their eyes, and go to sleep.”

The poet Cathy Park Hong also questioned the term. She wrote an entire essay called “Against Witness” pointing out that yes, perhaps, once upon a time we needed writers to tell us about the human rights violations they witnessed and most often also experienced, but now we log onto Twitter, and we are all witnesses to police brutality. Hong asked: Do we need poets to document state-sponsored violence, especially when we can see that no amount of testimony leads prosecutors to indict the accused police officers?

I have written and edited books that can be classified as bearing witness. These include a feminist anthology, a memoir about growing up Latina and queer, and a forthcoming nonfiction book about medicine, science, and the Latinx community. Still, I did not think of myself as a writer who witnessed, and I began to wonder why, especially since many works that influenced my own writing are labeled as literature of witness. These include Eduardo Galeano’s Memory of Fire trilogy of the Americas, and Herta Müller’s novels about the Romanian dictator Nicolae Ceaușescu. The author Luis Alberto Urrea, whose book The Devil’s Highway I admire deeply and teach to my college students, proudly claims the mantle of witness and insists that it evokes a call to action. Is he right?

Last spring, when I began to create an advanced course for creative writing students, I realized it was an opportunity to interrogate literature of witness and my aversion to the term. Also, the World Health Organization had just declared a pandemic. Whatever I thought about this literary category, my students and I were witnessing the start of a historical moment punctuated by empty supermarket shelves, price gouging on masks, and vacated dorm rooms. Then the news reports arrived from Italy: the hospitals were overwhelmed; the death toll was mounting. New York City followed. Soon it would be the Midwest, where I teach. I realized with a jolt that my students would need a way to think about what we were all seeing and hearing and experiencing first-hand.

What struck me immediately was that almost all of the books the literary establishment labels as witness are about atrocities that happened beyond the borders of the United States: the Holocaust, World War II, and a slew of dictatorships in South America and Eastern Europe. The canonical 1993 anthology, Against Forgetting, which introduced and established the notion of a “poetry of witness,” included a section on the U.S. Civil Rights Movement, but the anthology is still largely remembered as a work devoted to poets documenting atrocities in other countries. When a Nobel Prize symposium in 2001 convened literature laureates to discuss “literature of witness,” those who presented included writers from Germany, South Africa, and Japan. I read the list and wondered: Where’s Toni Morrison? Was the lasting legacy of slavery not a human rights violation to which her novels bore witness?

I looked at a new crop of books being published by Latinx writers in the U.S., including the nonfiction volume The Undocumented Americans by Karla Cornejo Villavicencio and the novel Lost Children Archive by Valeria Luiselli. These books were positioned in the market as speaking to experiences around immigration, race, and ethnicity—in other words, chronic hard-to-resolve social problems rather than atrocities carried out by U.S. officials and federal employees. How could our country account for its past mistakes and its ongoing ones around race and immigration when the publishing industry refused to identify these issues as human rights violations to which writers bear witness? Of course, the industry follows national discourse. Most Americans associate such violations with horrors enacted in other countries, not ours.

I continued digging into the history of literature of witness and made another discovery.

In Against Forgetting, the U.S. poet and human rights advocate Carolyn Forché writes that the Latin American literary tradition of testimonio deeply influenced her ideas about poetry of witness. It’s a tradition rarely mentioned in U.S. literary circles and one that I wasn’t even finding in narratives about literature of witness, but it was one I knew well. When I wrote the preface to my memoir A Cup of Water Under My Bed, I made a point of telling readers that the book was my way of testifying to the impact of public policies on my Latinx family and community.

In contrast to witness, I love the word testimonio, testimony. I love how it sounds: serious and engaged, aware of itself. Intentional. It says: I have made a decision, and I am here to testify.

Scholars pin testimonio’s origins to a 1966 Cuban work of nonfiction titled Biography of a Runaway Slave. It is the story of Esteban Montejo, a cimarrón, or runaway enslaved person, who fought for Cuba’s independence from Spain. But Montejo, who was born in 1860 and never learned to read or write, didn’t write the book. He told his story to an ethnographer—just as some African American slave narratives were published oral histories mediated by white abolitionists. Montejo’s book, published in the wake of the 1960s revolutions that rocked Latin America, became a powerful counter-narrative to the official history of political life for Black Cubans on the island.

George Yúdice, a prominent Latin American Studies academic and professor at the University of Miami, has come to describe testimonio as “an authentic narrative told by a witness who is moved to narrate by the urgency of a situation … Truth is summoned in the cause of denouncing a present situation of exploitation and oppression or in exorcising and setting aright official history.”

Testimonio, of course, did not stay in Latin America.

The tradition crossed the border, or to be more exact, queer Latinx feminists in the United States like Cherríe Moraga and Gloria Anzaldúa, along with African American feminists, began producing books in the 1970s and 1980s that testified to their collective experiences of race, gender, sexuality, and class. They often experimented with form, joining theory to poetry, and poetry to memoir. They played with soundscapes, hopscotched across multiple languages and dialects, denounced government policies, and ensured that an unofficial version of history existed along the official one.

In bookstores and libraries, their books are classified now as “feminist” or “women’s studies”—not literature of witness. But I consider them to be testimonies, and this is how they are often addressed in Latinx studies.

I thought about testimonio when I read Edwidge Danticat’s essay collection, Create Dangerously: The Immigrant Artist at Work. Danticat, who emigrated from Haiti to the U.S. at age 12, describes herself as a “distant witness” compared to those writers, journalists, and activists who lived, wrote, and died in Haiti during its 29-year-long dictatorship. But Danticat’s prose is the opposite of distant. Every essay comes to the reader in an intimate and singular voice that often pivots on movement, both real and figurative. In one essay, Danticat traverses mountains in Haiti to visit her auntie. In another, she drives around New York City, lost but in the good company of esteemed Haitian journalist Jean Dominique. And in an essay that feels utterly immediate, she travels back in history to interrogate how the United States refused to acknowledge the revolution in Haiti and its sovereignty for six decades.

Danticat argues that it’s not only writers who witness. Readers do, too. The title essay of Create Dangerously begins with the execution of two young men, Marcel Numa and Louis Drouin, who immigrated to the U.S. but eventually returned to Haiti to fight against the Duvalier dictatorship. In the wake of Numa and Drouin’s brutal deaths, the young men and women of Haiti congregated underground to read books and perform plays that indicted their country’s political leadership. “They needed art that could convince them that they would not die the same way Numa and Drouin did,” Danticat observes. And so she implores writers: “Create dangerously, for people who read dangerously.”

I thought of Danticat’s testimonio when my students and I read Eliot Weinberger’s 2005 essay, “What I Heard About Iraq.” They had all been toddlers when the U.S. invaded Iraq in 2003. They wanted to know if the essay was accurate, if it was chronological, and if people had been this opposed to the war. One student said she now felt she had been lied to as a child, when she hung yellow ribbons for soldiers. Why had no one told her this history?

Create dangerously, for people who read dangerously. No, my students and I were not reading underground, but we were reading this literature at a time when the U.S. president refused to concede that he had lost the election. We were reading and discussing what it meant to be a witness or to testify while the U.S. president openly encouraged white supremacy groups, and a grand jury declined to indict police officers for killing Breonna Taylor in her own home. It felt like we were reading in dangerous times.