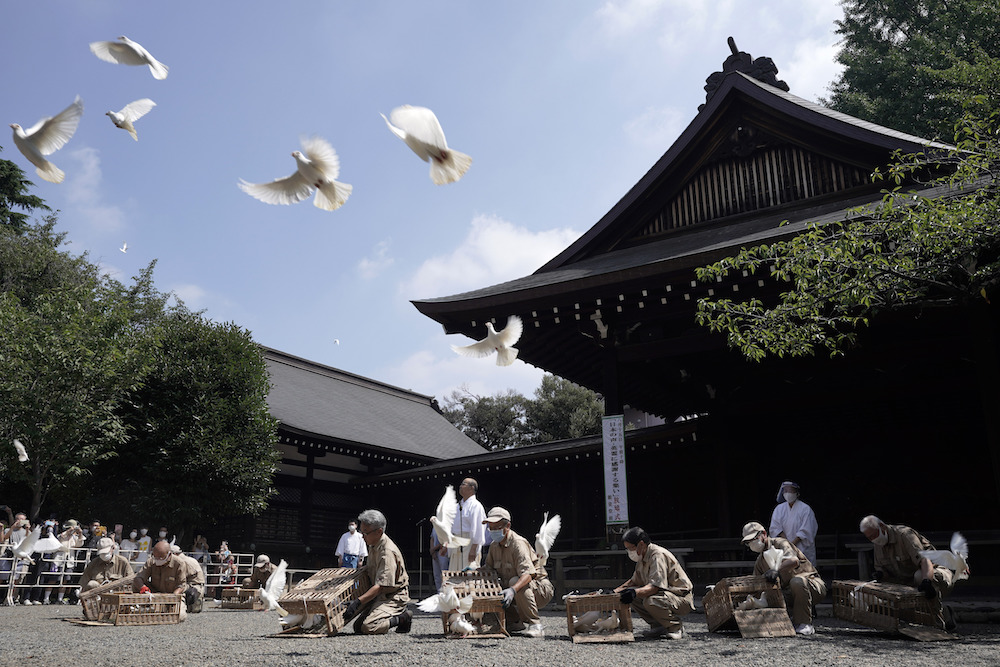 Tokyo’s Yasukuni Shrine continues to propagate an atmosphere of “misdirection and denial.” Courtesy of Associated Press.

The Yasukuni Shrine is an island of calm in an otherwise bustling city. Mature pines and cypress trees surround it, screening it from Tokyo’s relentless traffic noise. Shady walkways, sacred ponds and dozens of cherry trees make it a public haven for the many Japanese people who come here to honor their ancestors.

But if you look more closely, you’ll find clues to the regional rage and global controversies that plague this place. The shrine is dedicated to all those Japanese soldiers who sacrificed their lives on the battlefield since the Meiji Restoration in 1868, most of them during World War II. On the face of it, there is nothing offensive about this: Every nation must mourn its war dead.

But among the pines and the cherry trees lurk messages and monuments that prolong a deep denial about the country’s past sins.

Not far from the shrine stands a monument to the Indian jurist Radhabinod Pal, long honoured by Japanese nationalists. He was the only one of the 11 global judges in the Tokyo war crimes trials of 1946 to suggest that all of the Japanese defendants should have been found not guilty. And, tucked away behind the shrine, another memorial silently salutes to the Kenpeitai—the military police who terrorized civilians in the countries Japan conquered during the Second World War, and inside Japan itself. There is vast and undisputed documentation of this much-feared organization’s human rights abuses; its closest equivalents in the West would be the Nazi SS or the Soviet NKVD.

To muddy the waters even further, the war museum on the site, with an entrance just 100 feet from the shrine, tells stories that few reputable historians would recognize as true: The displays here blame Chinese provocations for Japan’s invasion of China, and American trade sanctions for Japan’s attack on Pearl Harbor. They even suggest that Japan’s invasion of Southeast Asia stemmed from a selfless desire to liberate the Asian people from European rule, rather than an entirely selfish imperial desire.

Perhaps worse than these historical distortions are the museum’s omissions. There is no mention here of the enforced sexual slavery of thousands of Korean “comfort women.” Nor is there any record of the medical experiments on Chinese civilians, the starvation of people in Indonesia, or the massacre of women and children in Manila. These events are well known all over the world and have been repeatedly proven—not only by foreign historians, but by Japanese ones. But they are entirely absent from the museum.

All of these things send the political message that Japan did nothing wrong in World War II and does not need to take responsibility for its actions. This is why a Chinese man tried to set fire to the gates of the shrine in 2011. That is why a South Korean man threw a bottle of paint thinners into the main hall of the shrine in 2013, or why another set off a bomb there in 2015.

There is another reason for attacks and controversy: the very souls housed here. This is not merely because the Yasukuni Shrine honors ordinary Japanese soldiers. Since the late 1950s, it has also openly and explicitly venerated the souls of convicted war criminals.

The problem began in 1959 after the shrine held a mass memorial for Japan’s war dead. In the years since the war, more than 2 million souls had been enshrined here: This ceremony was meant as a final way of marking the past and allowing the nation to move on.

This deeply conservative institution, which is steeped in traditions of self-sacrifice and martial glory, is trying to keep alive a vision of Japan as a warrior nation. Nothing else matters—not even reconciliation.

Until that point, Japanese war criminals had always been excluded. The enshrinement process involves inscribing the names and other details of the dead in the symbolic registry of deities, which is housed in a building behind the main shrine, away from the general public; without this information, enshrinement cannot take place. Not wishing to honor those who had brought shame upon Japan, the government had always avoided passing on these details to the Yasukuni priesthood, therefore eliminating any war criminals from veneration.

Even within the government, however, there were those who did not like this policy. The Ministry of Health and Welfare, which was responsible for liaising with the Yasukuni Shrine, consisted largely of ex-military men, many of whom disagreed with the verdicts of the war crimes trials. In the spring of 1959, the ministry secretly started providing the priests at the shrine with the details they needed.

Over the next eight years, some 984 so-called “Class B” and “Class C” criminals were enshrined. These men had been personally involved in the mass killing, exploitation and torture of prisoners and civilians around Asia. The process took place without fanfare, partly in order to avoid any kind of public backlash, but also to avoid any accusations of a merging of religious and governmental affairs—something banned under the post-war Japanese constitution. According to Higurashi Yoshinobu, a political scientist at Teikyo University in Tokyo, the shrine did not even seek permission from the families of those they enshrined, some of whom were deeply ashamed of what their relatives had done.

If the enshrinement of Japan’s Class B and C war criminals was a sensitive matter, then the enshrinement of its Class A criminals was even more controversial. These men had not personally conducted atrocities, but were rather the top brass: those who had been convicted at the Tokyo trials for masterminding and initiating war. For many years their enshrinement was stalled by the head priest, Tsukuba Fujimaro, but after his death in 1978, the new head priest, Matsudaira Nagayoshi, reversed course. In a secret ceremony on October 17 that same year, he enshrined all 14 Class A criminals.

None of these steps were justified. In the 1960s and 1970s, far more Japanese opposed the enshrinements than supported them. Even Emperor Hirohito did not seem to approve of them. Between 1945 and 1975, he visited the Yasukuni Shrine eight times, but once the Class A war criminals were enshrined he never visited again. After he died, his successors followed suit: Neither his son nor his grandson has ever visited the shrine.

Unfortunately, Japan’s prime ministers have not been quite so tactful. Over the past 40 years several have paid their respects here, always claiming they are coming for personal reasons, but also because they know that the more nationalist elements in their electorate will approve. Every time they do so, it causes a storm of outrage among Japan’s neighbors. The most recent visit was by then-Prime Minister Shinzo Abe, in December 2013, but it caused such controversy that Abe was not tempted to go again until after his resignation last September.

Other senior members of the Japanese government also visit the shrine regularly. In 2020, despite worsening relations with China and South Korea, four government ministers insisted on paying their respects. The day they chose to do so was probably the most diplomatically sensitive day of recent years—the 75th anniversary of Japan’s surrender in 1945. A spokesman for South Korea’s foreign ministry immediately expressed “deep disappointment and concern” for their insensitivity.

It is difficult to see how the situation might be salvaged now. The shrine authorities could start by removing the memorials to the Kenpeitai and Pal—but they are unlikely to do so of their own accord. And there is no sign of the popular protests against monuments that have happened recently in so many other parts of the world. Likewise, the museum that stands next to the shrine could change its provocative and questionable narrative of the war. But none of this would solve the central problem, which lies with the shrine itself.

Some people have suggested “de-enshrining” the spirits of Japan’s war criminals or moving them to another location. But the priests at the shrine insist that this is impossible for theological reasons: Once the souls of the dead have been “merged” here, they cannot be separated again.

What they neglect to mention is that it would also go against the whole political ethos that has been pursued by the shrine authorities ever since the 1950s. The priests here are not interested in guilt or innocence, which they consider a distraction from what is truly important. This deeply conservative institution, which is steeped in traditions of self-sacrifice and martial glory, is trying to keep alive a vision of Japan as a warrior nation. Nothing else matters—not even reconciliation.

Nowadays, most people in Japan accept the shame of their collective history, but would dearly like to move on. Last summer, at the 75th anniversary of Japan’s surrender, Emperor Naruhito openly expressed his “deep remorse” for his nation’s role as aggressor in World War II. Like the vast majority of Japan’s population, Naruhito was born after the war and is more concerned with the problems of the future than with trying to keep alive the poisonous values of the past.

“Looking back on the long period of post-war peace,” he said at a secular memorial service elsewhere in Tokyo, “reflecting on our past and bearing in mind the feelings of deep remorse, I earnestly hope that the ravages of war will never again be repeated.”

Most of the hundreds of thousands of people who visit the shrine would also like to move on. They would like to enjoy the Yasukuni Shrine as a peaceful oasis in an otherwise bustling city, to remember their ancestors without having to think of the actions of war criminals, or to worry about the possibility of an arson attack or a bomb.

But it is unlikely that Japan’s neighbors will ever be able to leave the past behind while the sins of the past remain unacknowledged here. The same is true for the Japanese themselves. While the shrine authorities propagate an atmosphere of misdirection and denial, neither the people who visit nor the spirits of the dead can ever fully be at peace.