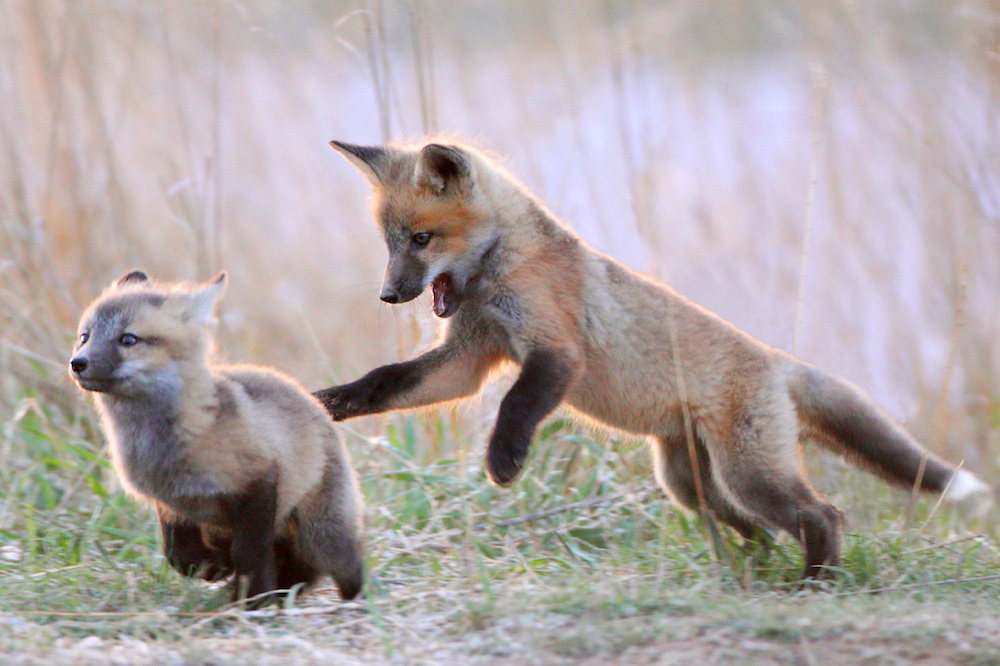 Fox kits play fight in order to develop their hunting skills and increase their chance of survival. Courtesy of Pat Gaines/flickr.

Ours is a time of reduced civility, heightened political partisanship, and decreased faith in institutions. If we don’t figure out how to engage respectfully, we will all lose out. COVID will continue to advance, and overrun our hospitals as we wait months to receive a vaccine that some 35 percent of Americans have said they will avoid. The climate crisis will bring more and more polluted air, hurricanes, floods, and fires as we hop from one not-so-natural disaster to another. The political discord of the past four years—and past two months—will continue to upend everyday life.

Americans need to find another way forward, a way to come together to solve the issues of the day and enable our continued survival as individuals, as a nation, and as a species. We have an audacious suggestion: Turn solving these critical tasks into a game. Let’s take our innate and life-preserving love of play and competition and harness it to change human behavior. By doing so we could improve the world in a way that decades of failed public discourse have not.

This idea takes its cues from the animal kingdom. In the wild, many animals use games and play to learn and improve themselves—and, ultimately, to survive. When wolf pups or fox kits chase their siblings around and pounce on each other near their den, they are predators “playing hunt,” perfecting their prey-catching skills and improving their odds of survival. When prey such as marmot pups chase their siblings near their burrows, they are “playing escape”; their survival depends on not being killed by the likes of wolves and foxes.

Importantly, these play bouts are ritualized and highly structured, and they involve communicating through strict signals to ensure that everyone involved realizes that what follows is play. Animals take turns. They let each other know through clear signals that even though they’re playing rough, it’s still play. If someone yelps in pain, for instance, everyone pauses for a moment to give the crying play partner a chance to recover.

Hunting and escaping, of course, are crucial skills for predators and prey; engaging in this kind of behavior helps them practice managing the difficult realities they will face as adults. But play is not limited only to chasing. Animals play fight and play wrestle to learn to navigate hierarchy and difference, to negotiate with one another, and to build social bonds. The marmots Dan studies begin to create their dominance hierarchies through play. And, when the time comes to guard valued resources—whether they be food or mates—they will be ready.

Some animal play operates just as human play does: mainly for fun! Crows slide down snowy rooftops just for the thrill of doing so. Monkeys leap from treetops into ponds to experience freefall with a reassuring splash of cool water at the end. Through this seemingly purposeless play, animals learn how to navigate challenging conditions, turning chaotic experiences into manageable ones. Indeed, by playing, they learn how to contend with failure, loss, vulnerability, and also success—where the stakes are relatively low.

Yes, play is evolutionarily expensive. It can be dangerous and it takes time away from practical tasks such as procuring food and finding shelter. And, yet, it is widespread throughout a large part of the animal kingdom. Its universality is striking.

Humans are, of course, familiar with the power of play. Athletic competitions, from Little League to the Olympics, present us with goals to be achieved and obstacles to be overcome. It doesn’t matter that both goals and obstacles are artificial: landing a ball into a net carries no real weight in the outside world and has no impact on it, aside from the meaning humans ascribe to it. Participating in sports helps humans learn to manage our competitive nature, taking an adversarial drive and harnessing it to build strength and health, to learn discipline, and to even create beauty when we play a game with skill, intelligence, and grace. Sports teach us to function within a social group and can build a sense of unity and cohesion. To play with someone else, one must agree to the rules of engagement.

What if we took the model of sport further, intentionally reverse engineering serious problems and turning them into games where friendly competition can reign? If problems could be tackled in such a way, in a safe environment with agreed-upon rules, we might be able to meet more of our goals—or at least, be more prepared to face them when they reach a crisis point.

People have tried it before, as they’ve searched for certain kinds of technological solutions. The Defense Advanced Research Projects Agency, or DARPA, is an advanced-technology branch of the U.S. Department of Defense, charged with trying out and perfecting new technologies for potential use on the battlefield and beyond. The agency created prize competitions called DARPA Challenges that ask engineers to compete in tackling seemingly unsolvable tasks under set rules of engagement. If a team manages to solve a particular problem, it wins a prize and glory—and society benefits.

Let’s take our innate and life-preserving love of play and competition and harness it to change human behavior.

One DARPA Challenge tasked engineers with inventing self-driving vehicles. The end goal was to develop automated weapons as well as create ways to transport critical supplies on and off the battlefield, but in the process it also gave us the self-driving vehicle technology that is slowly making its way onto our streets. The X-Prize Foundation does something similar, regularly announcing an audacious goal to improve health, technology, or the environment, and asking teams to self-organize and compete for acknowledgement and a cash prize.

Leaders could expand this competitive model to confront different sorts of pressing challenges that contest designers have often overlooked—those that require behavioral change, institutional investment, and sustained action. What if we treated society’s response to the climate crisis, the COVID pandemic, or even declining faith in politics as an opportunity for international competition and Olympics-like play? Think the Eurovision Song Contest, but for carbon reduction or civic participation.

Or, if international competition seems a step too far, the focus could be local and cooperative. We already know that neighborhood play can drive immediate benefits. When cities block off traffic during Ciclovía events, for instance, encouraging the public to ride bicycles, skate, or walk, and refrain from using cars, air quality improves immediately, local businesses get increased foot traffic, and people meet neighbors and interact with strangers in ways that would otherwise be unlikely.

Government and other leaders could create friendly competition among communities to walk and bike more, buy used or reusable products, install insulation, or favor high-efficiency appliances. We could track rides on public transit and offer prizes when ridership goes up and traffic congestion goes down. What if COVID transmission rates were monitored not just as a reminder of encroaching threat but also to celebrate—and reward—declining transmission rates? Instead of bemoaning a lack of political engagement, we might instead recognize the recent upsurge in voting and encourage cities, towns, or neighborhoods to get as close to 100 percent voting as possible, vying against one another toward that goal. We could create systems to facilitate, acknowledge, and reward success while encouraging communities to see failure as useful feedback—a learning experience much like a loss on a playing field.

If we create competition between communities in the interest of solving major problems, we will also need to set limits on what can be done in the interest of winning. Rules, structures, and parameters of engagement would be key. As we encourage communities to maximize voting, for example, we will need to give them reminders that voter intimidation is beyond the bounds of healthy competition.

Fair play will matter not just as much but more than whether we win. Rules extend beyond the game space to become a code of behavior, a process for respectful interaction. And here we would be following our nonhuman relatives—including marmots, crows, monkeys, foxes, and wolves—that directly benefit from their enjoyable and structured play.

Increasingly, it seems that Americans are losing the skills that come from respectful competition and dynamic collaboration. We can reverse that trend. We can relearn how to be adaptable and collaborative, and to respect one another even as we disagree.

Americans don’t play as much as we used to; our excuse is that we don’t have the time. The majority of children play a sport but, by age 15, most have quit. If people don’t play—whether it’s soccer or chess—how will they learn how to navigate competition with civility and care? What opportunities are they taking to practice working together in a group? How will they know that coming together with respect matters more than winning, and that losing can sometimes be an opportunity for learning?

Successful public discourse, at its root, is about respect for a process, and acceptable parameters for action: honoring the limits to which we, and others, have agreed. It hinges on recognizing that our opponents are worthy. It also involves a desire for an opponent to fully engage so that we can hone our skills, refine our position, and come to a satisfying compromise.

In other words, it’s a lot like a game.