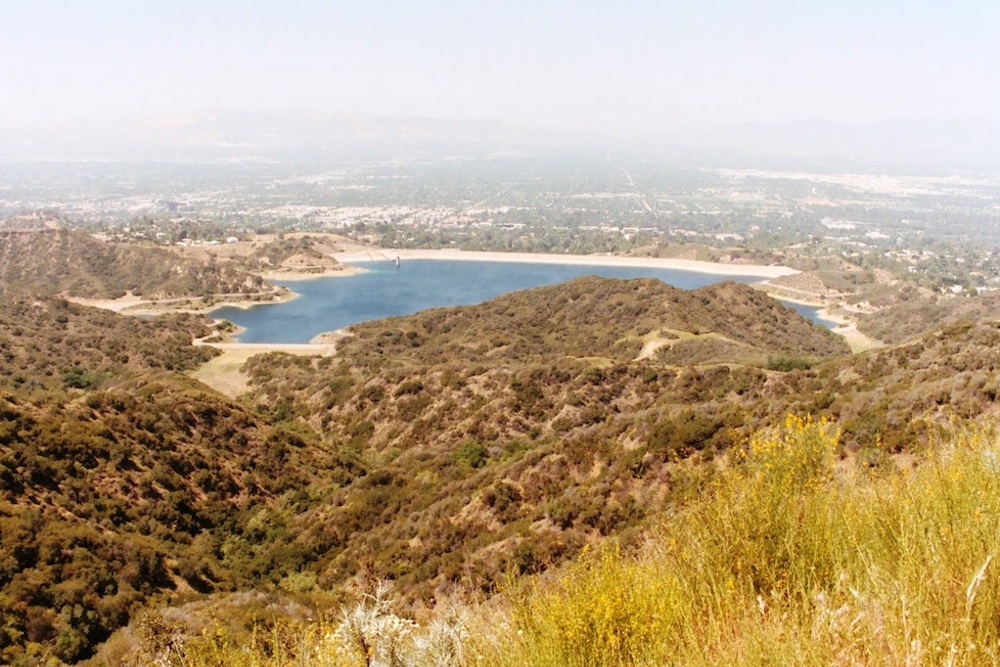 A view of the Encino Reservoir and San Fernando Valley in the distance from Mullholland Drive. Courtesy of Wikimedia Commons.

These are times for choosing, Californians, so pick a side: Do you prefer to elevate with Encino or roll with Reseda?

You may not know anything about these two neighborhoods, which border each other in L.A.’s San Fernando Valley. But if you’re a Californian, you should be familiar with the divide they represent—between those of us who live in the hills (or aspire to) and those of us who occupy the flatter precincts (and love them).

You don’t hear that much about this hillsiders-vs-flatlanders dynamic. Our media, elected officials, and intellectuals prefer to obsess about our big, polarizing divisions over politics, race, or gender. And when we discuss the fault lines within our political or cultural geography, Californians talk about the rivalry between north and south, or the differences between coastal counties and inland regions.

But the most intimate and important divides often lie within our hometowns, not between them. In California—a volatile and uneven place of mountains, valleys, and the canyons connecting them—our cities and towns often perch on slopes, putting hillsiders and flatlanders in close proximity, but somehow still in different worlds.

In most places, the hill people have more money, more privacy, and more power. The richest and most powerful Californians often make their homes in places whose very names broadcast their elevated status—Los Altos Hills, Beverly Hills, Del Mar Heights. And those spectacular views are not just about natural scenery; in California, our socioeconomic betters literally look down on us.

I found myself thinking about the hills-flatlands divide anew while watching the Netflix series Cobra Kai, which brings the characters from the 1980s Karate Kid films into California’s twisted present.

Almost everything has changed in the 30-plus years between the old films and new series. Community mores in the San Fernando Valley, where these stories are set, have become more inclusive. The demographics of karate-fighting teens have grown more diverse. And bullying—the central concern of these entertainments—has migrated online.

But what remains unchanged, and unbroken, is the line between the lovely hills of Encino and the rougher precincts of Reseda’s flatlands.

Back in 1984, when The Karate Kid premiered, the main character, Daniel LaRusso (Ralph Macchio), lived with his mother in a shabby Reseda apartment, didn’t have a car (his mom’s would barely start), and struggled to survive in a high school full of rich Encino kids, including his bully and karate rival Johnny Lawrence (William Zabka). In Cobra Kai, the characters have crisscrossed the hill-flatlands line, though the line itself endures.

But the most intimate and important divides often lie within our hometowns, not between them.

Daniel, now the Valley’s most successful car dealer, lives with his gorgeous wife and entitled children in a Mediterranean-style Encino mansion. Johnny, having spent the ensuing decades drinking and drugging himself into a middle-aged stupor, is a handyman who lives alone in a dark Reseda flat. The awakening of this Gen-X Rip Van Winkle (Johnny doesn’t know how to use the internet, and 1986’s Iron Eagle was the last movie he watched on TV), and his ham-handed efforts to deal with people on the Encino side of the line, give the show’s predictable plot lines a comedic, class-centric bite.

While Cobra Kai is mostly shot in Atlanta for economic reasons, it accurately reflects Encino-Reseda realities. Encino, population 44,000, is wealthier (median income of about $85,000), whiter (80 percent), older (average age north of 42), and less dense than the city of Los Angeles, of which it is a part. Reseda, population around 80,000 and also in the city, is average in wealth (median income around $60,000), younger (average age 32), and more ethnically and racially diverse (with a slight Latino majority) than Los Angeles overall. It has twice the population density of Encino (and a COVID-infection rate twice as high).

Reseda is lucky to have separate representation. Many California cities elect council members “at large,” meaning they could come from anywhere in town and represent the entire city—a setup that has led to overrepresentation of wealthier hill people in local politics. That’s one reason why, in recent years, lawyers have used the California Voting Rights Act of 2001 to pressure more than 100 cities and more than 200 school districts to switch to district elections, so that no neighborhood can produce all the elected officials.

There’s other good news for us flatlanders, all across the state. With California’s hill communities controlled by NIMBYs, our flatland neighborhoods are more dynamic, and thus more likely to support new housing, new entertainment, and new transit options. (Yes, our—I’ve spent my life in the flatlands because I’m afraid of heights and mudslides, and because I’ve never forgotten the Lethal Weapon 2 scene where Mel Gibson used his pickup truck to drag a bad guy’s mansion down from the Hollywood Hills.)

Reseda Rising, a $100 million-plus investment project spearheaded by Councilmember Bob Blumenfield, has already begun to transform the long-neglected Sherman Way corridor. Plans include an ice skating and roller rink (in partnership with the National Hockey League’s L.A. Kings), a new park and expanded bike path connected to the L.A. River, and the restoration of the Reseda Theater (you see its marquee at the beginning and end of Paul Thomas Anderson’s 1997 epic film about the Valley and pornography, Boogie Nights).

Walking and driving around the two neighborhoods on a recent weekday, I didn’t see any kids doing karate, but I couldn’t miss the contrast. Encino felt quiet and empty, its older people sequestered in their homes, while younger Reseda was bustling along Reseda Boulevard and near the Metro Orange Line, a popular rapid bus route. While snacking on delicious La Michoacana Mexican Ice Cream, I walked down Victory Boulevard between White Oak and Lindsay—the literal border of the two neighborhoods—and noticed the physical wall (to combat traffic noise) on the Encino side of the street.

I can understand why some Californians prefer the security of our state’s wealthy and leafy Encinos. It can feel good to peer down on Oakland from the Berkeley Hills, or lord over San Pedro from your Palos Verdes estate. And the relative emptiness of hillside communities is particularly appealing in the pandemic.

But once we’ve controlled COVID’s spread, I suspect that California’s Resedas will be more attractive to most of us. They’re more walkable, more affordable, and more approachable places, where it’s easier to make new friends, even if you don’t know karate.