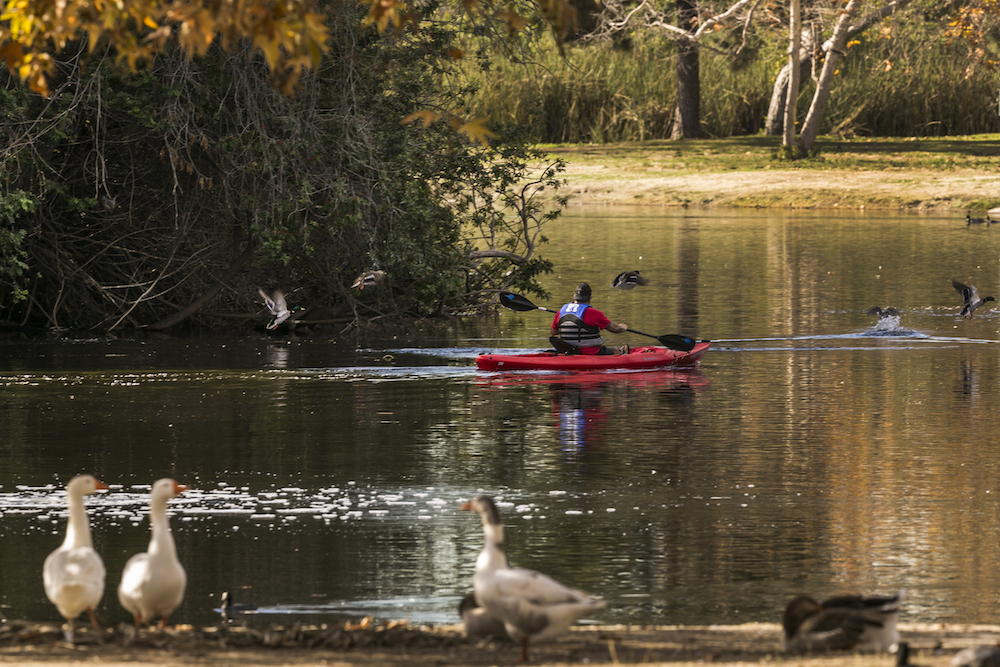 You can do everything from kayaking to BMX biking at the Whittier Narrows Recreation Area. Courtesy of Damian Dovarganes/Associated Press.

It was tricky to get out of the house while the state was under the latest stay-at-home order, much less to find public places that offered both ample social distance and community. But I managed to do both at a park 10 miles east of Downtown L.A.

I wish our entire state was as broad-minded as the Whittier Narrows Recreation Area. The nearly 1,500-acre park, spanning both sides of the 60 Freeway in the city of South El Monte, isn’t just one of L.A. County’s largest and most popular parks. It’s a vision of what California might be.

These days, our state is a place of shifting rules and endless compliance, but you can do pretty much anything you can think of at Whittier Narrows, from boating to BMX biking, fishing to frisbee golf. Our state’s public places have become intensely designed and rigidly organized to keep different attractions in defined spaces, but much of Whittier Narrows is gloriously empty and unfussy. And while the richest people and places usually get the best stuff in today’s California, Whittier Narrows is an unparalleled gem in a working-class crossroads of greater Los Angeles.

Right now, Whittier Narrows feels especially glorious. California can’t stop itself from adding categories and qualifications, even when the task is as straightforward as giving everybody an essential shot in the arm. But Whittier Narrows is for everybody, all the time. You don’t have to make an appointment or wait in long lines to use it. You can get inoculated with all manner of rest and recreation whenever it works for you.

“A stroll through Whittier Narrows Park is never anything less than a walk through many worlds,” David Reid wrote in an essay published in the magnificent anthology East of East: The Making of Greater El Monte. “On any given day, the scent of carne asada barbeques wafts on a breeze that is suddenly interrupted by the scent of sunblock from a runner in full stride. The sound of buzzing model airplanes drawing figure eights above the canopy of trees is punctuated by the shots from the shooting range. Weekends are filled with rowdy soccer games and families flocking from distant corners of Southern California for reunions.”

Big family reunions are on hold and the ballgames have gotten smaller, but the park’s very existence also offers a tonic of optimism: Even dark moments in history can produce things worth celebrating. Whittier Narrows and its park also remind us that listening to regular people can sometimes produce pleasant surprises.

Whittier Narrows is a gap between the Puente and Montebello Hills through which the Rio Hondo and San Gabriel Rivers flow. The geology created a habitat for animals and plants, and a fertile site for people to grow crops. Its water was eventually eyed for urbanizing Southern California, and the U.S. Army Corps of Engineers proposed building a dam in the narrows as part of a 1938 flood control plan.

Whittier Narrows is for everybody, all the time. You don’t have to make an appointment or wait in long lines to use it. You can get inoculated with all manner of rest and recreation whenever it works for you.

But a citizens’ committee spent a decade fighting the dam, which would have threatened thousands of residences, multiple school districts, farms, oil wells, and an Audubon Society bird sanctuary. In 1948, a local congressman named Richard Nixon brokered a compromise that moved the dam site about a mile, preserving some businesses, homes, the bird sanctuary, and other recreational land.

It was a decidedly mixed victory. The dam, completed in 1957, would still displace about 2,000 people, who were not compensated. The bird sanctuary—and nearby trails, lawns, and a lake—were handed over to county parks in 1970.

Whittier Narrows Park has since grown, in size and offerings. It’s ideal if, like me, you have three finicky children who never want to do the same thing. On our visits, we have gravitated to the three lakes—North, Center, and Legg—which are home to watercraft from rented pedal boats to model speedboats for racing. We’ve picnicked, walked and biked the trails around the lakes, and climbed on the large sea “creatures” on the shore, including a two-headed dragon and an octopus. These are distinctive and playful sculptures made by the Mexican artist Benjamin Dominguez; he also produced the inventive slides and play structures of La Laguna Playground in San Gabriel and Atlantis Play Center in Garden Grove.

We’ve thrown frisbees around the massive disc golf course on the park’s east side, which nearly extends to a second freeway, the 605. We’ve enjoyed the shade of the many large trees (including California live oaks, sycamores, and pines) around the baseball and softball fields west of Rosemead Blvd., a quieter spot these days with organized sports mostly shut down by the pandemic. And there’s still so much we haven’t checked out—like the shooting range, the horse center, the nature center, the military museum, and the urban farm.

The best thing about the park is the mix of people. You’ll encounter folks of all races and ages, the majority of them Latino, reflecting the demographics of the greater El Monte area. The atmosphere is friendly and welcoming.

Regional parks like Whittier Narrows, with their something-for-everybody approach, increasingly feel out of fashion. With land scarce, we give all the attention and accolades to smaller, prettier, highly designed parks in tight urban spaces. And the middle-class and working-class families served by Whittier Narrows or El Dorado Regional Park in north Long Beach or by Hansen Dam Recreational Area in the San Fernando Valley lack cultural power in a Southern California increasingly divided between, and defined by, rich and poor.

Which is another reason why Whittier Narrows should be celebrated. Today, in densely populated and pandemic-devastated Los Angeles County, such large parks, with plenty of space to spread out, are a lifeline.

One downside of having a lot of space is that large parks are fighting off proposals to take parts of their land for development. The wonder of Whittier Narrows is that it is appreciated enough that people want to expand it.

In December, the U.S. Army Corps of Engineers offered to lease another 47 acres of land in the dam area for a park expansion. L.A. County responded by saying it might acquire the land outright. County officials disclosed three possible concepts for this park expansion—creating an entertainment venue for fairs and food festivals, adding full-sized soccer fields, or building a large cricket field and complex.

It’d be fitting if Whittier Narrows somehow manages to incorporate it all.