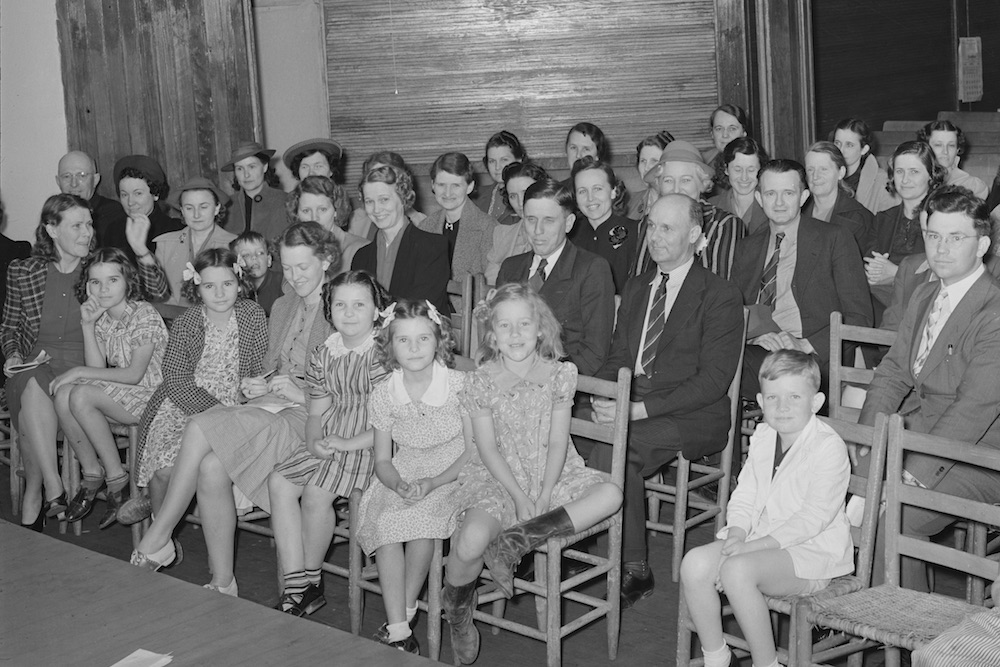 All across the U.S., for more than a century, PTAs like this 1939 gathering in San Augustine, Texas have united members to improve life for children—at school and at home. The organization’s example has a lot to teach us today. Courtesy of the Russell Lee/Farm Security Administration - Office of War Information Photograph Collection (Library of Congress).

The past year has been like no other, in many ways. Consider the remote schooling of millions of children in the United States due to the coronavirus pandemic. Never in the history of American education since the 1890s, when our widespread system of organized, formal schooling developed, has the school entered the home in such a pervasive way. Parents and caregivers have gotten a firsthand look at the challenges teachers face daily in preparing lessons, conveying content, and assessing learning. Teachers have spent (virtual) time in their students’ homes and have dealt with the strange sensation of having parents observe their classrooms on a daily basis. Frustrations have mounted on both sides.

The relationship between parents and teachers has a long history—one that we might look to as we navigate today’s challenges. One of the best models for improving parent-teacher partnerships is the National Parent-Teacher Association, or PTA, one of the most powerful and ubiquitous voluntary organizations in the United States in the 20th century. The history of the PTA can offer lessons for us all, whether learning is taking place at home, in school, or in a hybrid format. In particular, it shows us how parents, teachers, citizens, and communities work better together, when they are united.

The National PTA grew out of the women’s club movement of the late 19th century, which gave both Black and white women an acceptable way to carry out social reform efforts in the public arena. Across the country, women banded together to battle hunger, neglect, and poverty. Black women were among the first to organize local benevolent societies, which helped community members survive hardships by collecting money to fund burials and support the sick.

Over time, women’s organizations coalesced into a full-fledged, nation-spanning movement that wielded local and legislative power. The Woman’s Christian Temperance Union was founded in 1873; the General Federation of Women’s Clubs organized its national leadership body in 1890; and the National Association of Colored Women’s Clubs originated in 1896. Building on these networks, the National Congress of Mothers (NCM), the organization that was to become the National PTA, started meeting in 1897. Conceived of as a one-time gathering in Washington, D.C., to disseminate the latest information on child welfare and parent education, its elite organizers expected 50 women to attend. Nearly 2,000 showed up. A majority of the participants were white women, although there were some white male speakers and Black women in attendance, too. All were middle- and upper-class, most with grown children. Newspapers reported the event with derision. One headline read, “No Hats to Be Worn,” referring to the founders’ intentions to hold a series of working sessions where women would remove their hats and get down to work. But even if journalists played it for a joke, bare heads signified one of the originators’ goals: to blur class lines.

At that meeting, the PTA and its leaders codified their belief in and support of education for all, and the importance of involving entire communities in the discussion. From the start, they focused on three key ideas: disseminating the latest research on childrearing; ensuring that all children (even the “puny, neglected” children of the rich) had access to sound parenting at home and good education in schools; and ensuring that schools were clean, attractive, and staffed with skilled teachers. Widows and families with grown children were active in the early PTA, embracing the notion that if everyone has opportunities and successes, all of society will benefit. Education and schooling were everyone’s responsibility, from the businessperson to the farmer to the factory worker to the retiree.

The history of the PTA can offer lessons for us all, whether learning is taking place at home, in school, or in a hybrid format.

After the meeting, leaders drew up a Declaration of Principles and drafted a constitution that established the Mother’s Congress as an ongoing organization with local, state, and national offices. Although the literature advertising that first meeting in February 1897 stated that the group would not discriminate based on “race, color, or condition,” and even though several Black women attended the first few annual meetings as speakers, because of de jure and de facto segregation, Black women did not join as members. Instead, communities across the country created segregated Black and white PTAs.

Though vastly underfunded in comparison to white women’s efforts, Black educational organizations thrived on a trajectory of their own. Around the American South in the early 20th century, Black teachers created disparate local groups—usually called school improvement societies—to promote education, establish schools, and feed and clothe the needy. Importantly, these organizations gave African Americans a voice in schooling that they did not have in the Jim Crow South, where Black schools were overseen by white school boards. Local African American school groups coalesced to found state units in Georgia and Alabama and, eventually, the National Congress of Colored Parents and Teachers, or Black PTA, in 1926. Even though the Black PTA operated only in the former slave-holding states of the South, Black parents and teachers in other states, including Kansas and Delaware, also established segregated PTA units, arguing that segregated associations served their particular needs.

In their first quarter century, Black and white women’s parent-teacher groups accomplished a vast variety of reforms in public schools. They helped create and raise money to fund a number of programs and features we now take for granted, including school lunches, day (care) nurseries, bubble (water) fountains, playgrounds, kindergartens, vacation schools, and medical inspections in schools, as well as new school buildings and beautification of existing schools. These efforts continued well into the 20th century. In Black communities, teachers and parents worked together closely. When teachers helped organize local citizens to build schools in the rural South in the early 20th century, they helped established new communities, cementing relationships through social events, fundraisers, and pageants. It was common for men to hold leadership positions in Black PTAs. In white communities, women volunteers were more typical. Tensions often arose between white PTAs and professional educators, so principals sought to contain and direct volunteer energies. Men’s participation in white PTAs grew over time, although the organization remains primarily female even today.

PTAs remained segregated into the middle of the 20th century. After 1926, white PTA membership skyrocketed, reaching 2.4 million by 1940 and 8.8 million at its peak in 1954. The Black PTA grew rapidly, too, reaching 26,000 members in 1940 and a peak of 250,000 in 1961—but these figures undercount the true number of active members, because the cost of joining the organization, though minimal, was still a struggle for many in Black communities. PTAs grew large because they appealed to all Americans—across race, class, and region; in middle-class, working-class, and low-income communities alike. Local PTAs, like other civic associations of this time period, held face-to-face meetings which were part business, part social, and sometimes part spiritual. Women learned leadership and public speaking, as well as how to effect change in Washington. By mid-century, the PTA was a powerful lobby, and schools and families around the nation benefited from its efforts, which included instituting school lunches and promoting immunization. Beginning in the 1950s, Black PTA leaders took up civil rights efforts such as running voter registration drives, placing voting machines in schools, and offering adult literacy classes at night. The PTA was a vast network of action and communication.

The belief that all children matter, even if they look different than our own, was an extremely provocative notion in 1897, when the National Congress of Mothers was founded. Yet it made sense: The maternalist ideology of the organization’s founders maintained that women were united as mothers first—with a primary responsibility to children everywhere. The first NCM had presentations on Jewish family life and a lecture supporting the education of Black children by the Black poet and activist Frances Ellen Watkins Harper. In the 1940s, local PTA units initiated intercultural education groups. In the 1960s, religious diversity efforts included an alliance with the International Conference of Christians and Jews.

After the Brown v. Board of Education decision in 1954, the Black and white national PTA offices agreed to merge, resulting in a protracted desegregation process that was not accomplished until 1970. Directly after Brown, PTA units in border states desegregated, too—but those in the Deep South refused, leaving Black PTA leaders to press the effort forward, and heightening tensions and mistrust in the organization. It took 16 years for the last holdout state PTA, in Alabama, to desegregate. Unfortunately, desegregation in the segregated state units of this large voluntary organization followed the same path as it had in Southern schools. Black PTA officers and members did not have a place in the newly constituted organization, just as Black teachers and principals lost their jobs.

The PTA today, like so many organizations and institutions in the U.S., is working toward greater inclusivity and equity, and acknowledging a history that was at once progressive yet rife with inequalities. Our educational system—at the national, state, and local levels—remains a diverse space and a potential engine of mobility, as well as an area of American life where racism is inherent, and students and communities stand on uneven footing based on background. The pandemic surely has worsened the gap between the haves and have-nots.

Still, PTA history points the way forward. A common trope—particularly as districts battle over how and when to return to the classroom—emphasizes the conflicted relationship between parents and professional educators. But the PTA of the 20th century aligned parents and teachers more closely than we tend to think, with the two groups in many instances working closely side-by-side. Remote learning during the pandemic has helped Americans understand that we all want the same thing for the children and youth in our schools. We want them to be safe and engaged, and to thrive intellectually, emotionally, and physically. This is a shared endeavor for which we all are responsible.

The parents, teachers, and volunteers of the PTA of the past believed deeply that they could accomplish much through cooperation, when different constituencies worked together toward shared goals rather than fighting over perceived scarce resources. If we keep in mind the bedrock that the PTA was founded upon and that has continued to sustain it in so many places—namely, that schools belong to their communities and are united around efforts to improve education, life, and civic engagement nationally—our nation’s education system will be able to find our way back, and then forward, again.