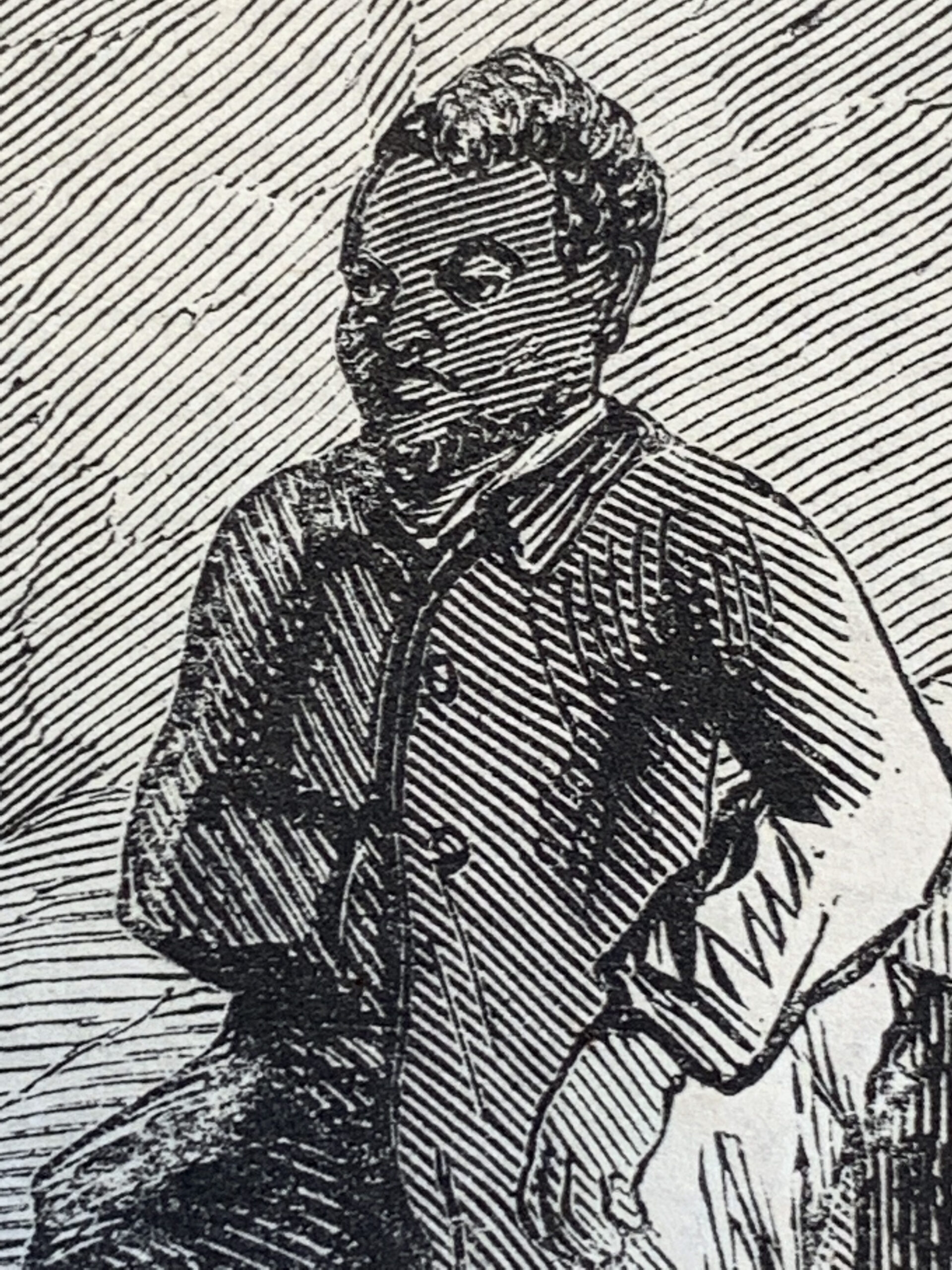 Since John Brown’s invasion of Harpers Ferry, Virginia (today West Virginia) in 1859, little attention has been paid to the small band of men who followed him.

Sure, here and there, a writer has attempted to tell the stories of Brown’s raiders—that little army of highly principled and passionate men, many of them young abolitionists who shared their leader’s vision for the redemption of the nation from the powerful interests of chattel slavery. With neither payment nor promise of success, the Harpers Ferry raiders, failing to launch a liberation movement in the South, nevertheless prefigured the most devoted of the Union army during the Civil War.

Even less attention has been paid to the five Black men who followed John Brown, despite the importance of their stories, and the depths of their sacrifices. Two of the five were killed at Harpers Ferry. Another two were captured, tried, and hanged following Brown’s execution. And the fifth escaped to Canada by means of the Underground Railroad.

Happily, the stolid indifference toward Brown’s men that defined much of the 20th century’s official narrative has begun to recede—as historians in the 21st century have reassessed John Brown himself. This scrutiny has led to more questions, more research, and more books about Brown’s men, especially the African American raiders who faced the greatest contempt and hatred from the South for joining Brown’s antislavery movement.

Pop culture has responded, too. Actor and activist Danny Glover is now promoting a screenplay that he has co-written for a film about the Black Harpers Ferry raiders. The Black Harpers Ferry raiders already have been featured in two fictional versions of the John Brown story, in Showtime’s miniseries based on James McBride novel, The Good Lord Bird; and in Emperor, the highly fictionalized 2020 movie about the raider Shields Green.

I’m Green’s biographer, and I appreciated both productions for their entertainment value, even though they were vehicles of imagination more than historical memory. But Emperor, in particular, is fabricated and sensational. It portrays Shields Green as an antebellum action hero who stopped all in his path, rather than the real-life abolitionist martyr who followed Brown to the gallows in 1859.

Of course, it’s easy to take license with “Emperor” Shields Green, because so little is known about his life. For many years, historians have recounted the skeletal narrative of his life almost as a cliché, without examining the fine details of the story.

The traditional account of Emperor (as he liked to call himself) is that he was an inexperienced and idealistic man who escaped slavery, leaving a young son behind in South Carolina, fleeing northward by boat shortly before the Harpers Ferry raid. Reaching Rochester, New York, Green is said to have met Frederick Douglass, and to have been enlisted by John Brown for his Virginia invasion. In this telling, he is a passive player.

However, as I examined the record more closely—paying special attention to the few statements that Emperor himself made after the raid, as a prisoner in Virginia—I began to revise my understanding of his life in more nuanced terms. The conclusion that I’ve reached—based admittedly on limited evidence—is that Emperor was not enslaved in the South. Instead, as he later told an interviewer, he was born to free parents, and apparently was a free man in South Carolina until he felt it necessary to flee.

The theory makes sense. Green’s legal status would not have protected him from the preponderant racism and prejudice of the Lower South, and it’s not surprising that a free man was eventually driven to flee, perhaps by the threat of imprisonment or enslavement, with the hope of one day returning to the South to reclaim his son in freedom. Emperor made his way northward, determined to fight slavery, perhaps even looking for the right occasion to strike back. It is quite possible that he moved about the North for the better part of a decade before joining John Brown’s men in 1859.

Emperor told one interviewer about his free status in South Carolina during the post-raid imprisonment, and told others that he had made connections in Pennsylvania, where he was involved in antislavery resistance. Sometimes reporters linked him to antislavery resistance in Harrisburg, Pennsylvania, where there was a vibrant Black community in the 1850s. According to records I’ve reviewed, he did live in Rochester at one point, and probably met Douglass before moving to Ontario, Canada, where he remained a few years before returning to the United States in order to join Brown’s men.

Of all of the Harpers Ferry raiders, Emperor Shields Green is the most mysterious. We have yet to learn the name of his parents. Although we can prove that he was indeed survived by a son, we cannot yet determine his son’s name.

Indeed, when all available evidence is examined, it is clear that Emperor was no mere hanger-on to leaders like Douglass and Brown, but rather a man with a mission of his own, a freedom fighter on his own terms. By one account, when Douglass advised him not to join Brown’s little army, Emperor disagreed, opting to “go with the old man.” This does not reflect an episode of youthful idealism, since by 1859, Green seems to have been a man in his mid-thirties, not the naïve youth portrayed in some accounts.

In the first promising hours of opportunity opened by the Harpers Ferry invasion, Emperor worked to rally local enslaved people and bravely fought against armed Virginians with his Sharps repeating rifle. However, when Brown unfortunately delayed in town and lost their escape route, success turned to defeat. Bellicose locals began to cut down and murder the raiders, leaving Brown and several of his men, including Green, holed up in the Harpers Ferry fire engine house. Emperor fought valiantly until the raiders were overrun by U.S. Marines on the morning of October 18, 1859.

Like Brown, Emperor survived the assault and was jailed in the county seat at Charlestown (today, Charles Town). He was tried by a jury of slaveholders and found guilty of insurrection and murder. As the darkest of Brown’s Black raiders, Emperor was particularly disdained by his Virginia captors, but he withstood their contempt and refused to provide any information about Brown’s plans, in keeping with the leader’s directions to “tell no tales out of school.”

After their trials, Emperor and three other raiders, two white men and another Black recruit, John Copeland, were sentenced to death. They were executed on December 16, 1859, two weeks after John Brown’s hanging, and upon the same gallows.

After execution, the remains of Emperor and Copeland were immediately stolen by Southern medical students and used for experimentation at the nearby Winchester Medical College. Copeland’s family in Ohio had begged for his body even before the executions, but the Virginians never surrendered the remains, even after using them for medical dissection. Afterward, both bodies disappeared, perhaps being secretly buried in an unmarked grave that was discovered over a half-century later.

But, in 1882, newspapers in Georgia carried a small notice that the skull of Emperor Shields Green was being displayed at a store in Athens, Georgia, and probably in other venues in the South. It was a sign of the times—white supremacy had reasserted itself when Reconstruction had been fatally undermined, and Jim Crow and racist terrorism prevailed.

In the film Emperor, producer Mark Amin tells a very different story. The Black hero outsmarts a relentless white slave hunter, leaving him to die in an exploding bell tower, and leaps into a nearby river and escapes. Emperor then returns to South Carolina and reclaims his young son. And in the final scene, decades later, Emperor’s son, now a grown man, submits a manuscript to a New York publisher. It is the story of his father’s life. But however poignant the pretend ending may be, Amin’s “Emperor” loses the real pathos of the story—the struggle and sacrifice of an antislavery fighter—especially for those who will mistake the movie for history.

And there is more history to learn. Of all of the Harpers Ferry raiders, Emperor Shields Green is the most mysterious. We have yet to learn the name of his parents. Although we can prove that he was indeed survived by a son, we cannot yet determine his son’s name.

When he died in Virginia, Emperor—unlike every other Harpers Ferry raider—left no daguerreotype image of himself, so that even his likeness has been subjected to the uncertain shades of the past. In the handful of newspaper sketches of Emperor that survive, most of the white artists sketched him as a demoralized prisoner, as crestfallen and defeated as the South—and most white people at the time—would have preferred.

Fortunately, one sketch, picturing Emperor among the other prisoners in Charlestown jail, captured him in a manner probably most like himself. In his jail cell with his feet manacled, Emperor nevertheless sits in a manner almost regal, with his right hand placed intentionally inside his coat in the manner of pre-photographic portraiture. This is not the Emperor imagined by Hollywood, but rather captured in the frank sketch of an artist. Here he is a brave Black man, who snatches dignity back despite all the forces of racism and injustice, despite the sentence of death overhanging him.

Striking a determined, even defiant pose, Emperor Shields Green reminds us that, in his own words, “death from the hands of the law for no offense save for believing in liberty for myself and my race would not be a degradation.”