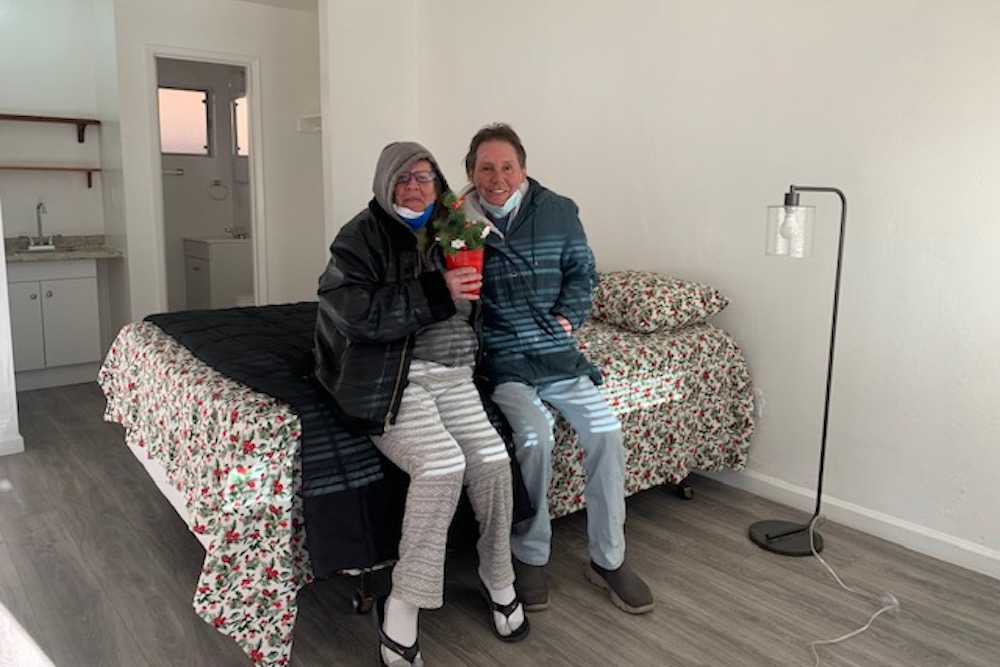 Residents of a South Lake Tahoe supportive housing development. Courtesy of the Tahoe Coalition for the Homeless.

Have you given up hope that California will ever get its 150,000-person homeless population off the streets? Are you dubious that your hometown could ever reduce its homelessness to zero?

If so, then you should go jump in a lake.

Either Tahoe or Elsinore will do.

South Lake Tahoe and Lake Elsinore—separated by 460 miles, 5,000 feet in elevation, and 25 degrees in average temperature—have built such supportive housing infrastructures that within two years both could achieve “functional zero.” That’s the term for communities that have solved homelessness for a particular population, with systems comprehensive enough to assure that homelessness is rare, brief, and non-recurring.

In the process, both lakeside communities are challenging the cynical conventional wisdom that homelessness is too difficult a problem for the state’s dysfunctional governments and divided citizens to solve, and showing other California places how—with jet-ski speed—they might support all their homeless neighbors.

There are two layers to this story. The first is about how this deadly pandemic, while killing more than 50,000 Californians, has opened up government spending and new possibilities for the people and communities that survive it.

Last year South Lake Tahoe and Lake Elsinore were among California’s first cities to secure funding under the state’s $600 million Homekey program, which allows cities to purchase hotels, motels, and other properties and convert them into long-term housing for homeless people. While the state’s overall approach to homelessness remains disjointed—a new state audit notes that homeless services are divided up between nine state agencies and 41 different programs—Homekey, which was enacted with dollars from the federal Coronavirus Aid, Relief, and Economic Security (CARES) Act, has already shown itself to be exceptional in its flexibility, funding, and fast impact.

But these lakeside successes are about more than numbers, or the benefits of emergency-era programs. The second layer of this story is that the biggest obstacles to reducing homelessness lie not with the people living on the streets, but in the conflicts within communities about how to respond to the problem.

South Lake Tahoe, among California’s colder places, and Lake Elsinore, among its hottest, both could take advantage of pandemic opportunities on homelessness because they had already managed to find a comfortable middle temperature on the issue.

In Tahoe, the cold was the inspiration for addressing homelessness. Those who wanted progressive assistance for homeless people and those who wanted tougher law enforcement both agreed that the area’s winters could kill people living outdoors. So, community leaders, including local doctor Marissa Muscat, opened the Warm Room, a seasonal winter shelter, in 2015. As the shelter grew, so did the non-profit Tahoe Coalition for the Homeless, which ran the shelter and brought people together to work on homeless issues.

The biggest obstacles to reducing homelessness lie not with the people living on the streets, but in the conflicts within communities about how to respond to the problem.

At the time, there was no year-round shelter or permanent supportive housing in South Lake Tahoe, population 22,000—or anywhere else in El Dorado County. To find supportive services, from mental health care to veterans’ benefits, people experiencing homelessness in South Lake Tahoe sometimes had to travel an hour over Echo Summit to get to Placerville, the county seat.

In the year before COVID hit, the Tahoe Coalition was building momentum for locally based, long-term supports. In January 2020, the coalition hired an executive director with extensive experience in Bay Area homelessness work, Cheyenne Purrington.

COVID accelerated these efforts. The coalition built a data-sharing network to identify those most in need. The coalition, whose staff has grown from 2 to 15, first used Project Roomkey, a temporary state program enacted during the pandemic, to house 30 people in the Econo Lodge. When Homekey funds became available in the fall, the coalition then purchased three motels that are now being turned into permanent supportive housing for 70 people.

Purrington says this investment in housing supports is paying off in fewer police calls and emergency room visits. It also demonstrates the power of supporting people at risk of homelessness in smaller places. “With a community like South Lake Tahoe, we can end homelessness with these three properties,” she says. “If small communities don’t have resources to do this, people start bouncing around and end up in larger cities where there are services.”

Lake Elsinore, a southwest Riverside County city of 70,000, is learning a similar lesson.

Located between but apart from the L.A. basin, San Diego, and the Inland Empire desert, Lake Elsinore can feel like the edge of the urban cliff (perhaps that’s why sci-fi novelist John Varley has civilization re-establish there at the end of Slow Apocalypse). In 2015 and 2016, the city was consumed with conflict over growing homelessness; breaking up encampments didn’t seem to work.

But Lake Elsinore is full of risk-takers (it’s such a mecca for extreme sports that I’m always being invited to jump out of airplanes there), and in 2017, the city decided to brave the political winds and form a homelessness task force with local officials, law enforcement, and concerned citizens. Those meetings created a safe space to think seriously about the problem. “Homelessness was such a divisive topic here,” says city official Nicole Dailey, a task force participant. “The task force allowed us to work.”

The task force soon focused on housing 150 local people identified as chronically homeless, many of them living along the lake’s 14 miles of shoreline. Lake Elsinore at the time offered little in terms of shelters and other supports; people who needed help could be sent to the city of Riverside or the Coachella Valley. But the task force changed that. The county sheriff’s department assigned a community resources officer for Lake Elsinore. A nonprofit called Social Work Action Group, or SWAG, stepped in to lead homeless services. The city used pre-pandemic grants to secure one motel for emergency housing, and to turn a former convent in nearby Perris into longer-term housing.

When the pandemic and Homekey arrived with a $3.1 million grant, the city quickly purchased a motel in Lake Elsinore’s historic downtown. It opened on December 30 with a nautical name, the Anchor.

When SWAG’s on-site manager Robel Kevorkian gave me a tour recently, the Anchor was immaculate, with people occupying all but two of the 16 rooms, each of which are equipped with their own kitchen and bath. The staff include social workers, a nurse practitioner, an occupational therapist, and a substance-abuse counselor. There’s a music room, a shaded outdoor dining space, a classroom for clients, a community garden, a swimming pool, and a hot tub. The Anchor provides only breakfast and lunch, but one client currently living there is such a skilled chef that he often cooks dinner for everyone.

“I worked outreach, and it’s harder when people are on the streets or by the lake,” says Kevorkian. “It’s much easier and better to provide support to people here.”

Homelessness is not over. Indeed, from one room at the Anchor, I could see a homeless person camped on the city’s Riverwalk. When I later spoke to that man, and four other homeless people living on the lakeshore, each said SWAG was in close touch, and was working to find them housing.

But functional zero for chronic homelessness is not so far away. City officials say their point-in-time homeless count has declined more than one third since 2018. And the city is eyeing both expansion and further development of the Anchor. While the facility now provides 90-day interim housing (before people graduate to the Perris convent), Lake Elsinore plans to turn it into permanent supportive housing by 2025.