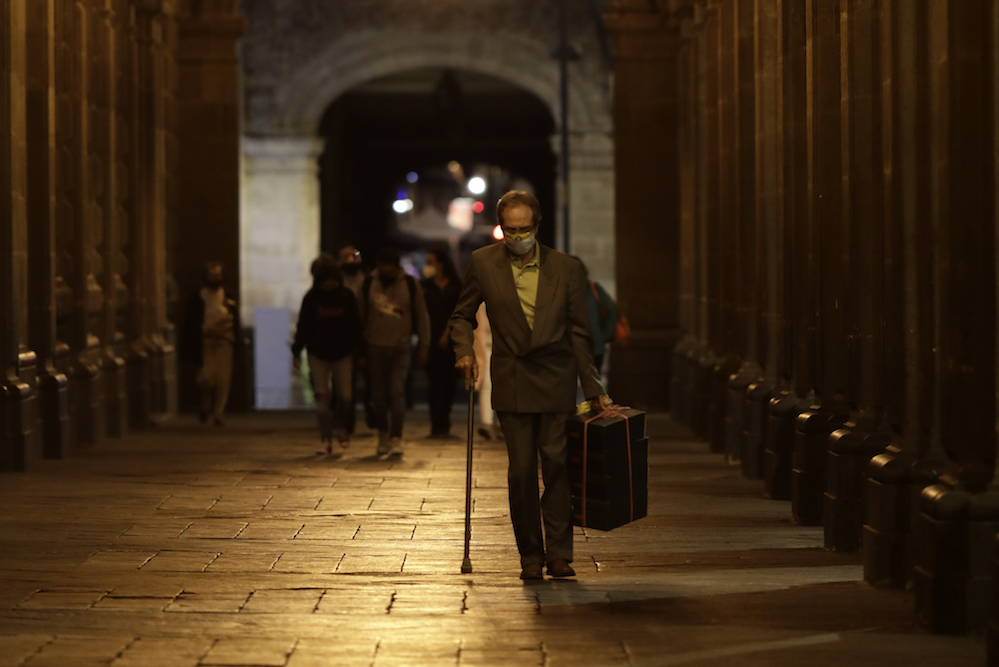 A man wearing a mask walks in one of the arcades around the Zócalo, Mexico City's main square, on Tuesday, March 16, 2021. Courtesy of Eduardo Verdugo/Associated Press.

What will happen first—the end of the pandemic, or the beginning of Mexico City taking the pandemic seriously?

COVID-19 hit our side of the world relatively late. That meant that Mexico City, where I live, had one month’s notice to prepare after seeing what was happening in Asia and Europe. Unfortunately, we did not use that advance warning well, and now we are still paying for it. Almost a year after COVID-19 hit us, we have reached approximately 600,000 confirmed cases and 30,000 deaths.

As the city continues to suffer under the pandemic—even as other parts of the world have COVID-19 under control, or are well on their way to getting vaccinated—I find myself thinking back to that time last February and early March when life went on as usual in Mexico. It seems strange in the memory: Why did we think we could be spared?

It took until March 23, 2020, for Mexican authorities to officially urge people to stay home. Still, they noted the low number of reported cases and said there was nothing to be afraid of; we would be out of confinement by April 19. Then that date was pushed back to June. After that, the government stopped estimating when lockdown would be over.

It’s still not over. We residents of Mexico City have been officially on lockdown for nearly a year, since March 23. Or to be more accurate, we are supposed to be on lockdown.

At first, people stayed home and followed the protocols. So, at least for the first two or three months, we experienced unprecedented silence in our urbanity. The city was eerily quiet, especially at night. The number of cars (both parked and moving) in the streets was reduced dramatically, which gave some streets a post-apocalypse aura.

I had never experienced such a feeling of solitude in Mexico City before. One night in last year’s spring—I can’t remember exactly when, since keeping track of time’s passage has been challenging—I was walking home at around 9 p.m., and it felt like the world had suddenly stopped. I was the only person walking in the street and the only noises were my footsteps. I remember thinking how unaccustomed we are, in a city of 20 million people, to being utterly alone. It gave me the creeps and I hurried my steps back home.

While the usual city sounds were muted, confinement wasn’t entirely quiet—it brought the audible singing of birds. A family of butterflies surprised me by making a home among the leaves of the plants in my balcony. I’m not sure if the butterflies or the birds are new; it was having silence and the time to actually notice both of them that made them remarkable.

But the peace and quiet did not last.

Early on, a traffic light system was employed by authorities to tell us what’s what. Red light meant a total lockdown. Green meant a total lift of lockdown measures—or at least that’s what we’ve been told, because we have yet to experience green. The pandemic traffic light has since gone from red to all different shades of orange to red again… and then once more into “orange with caution.”

As time passed, and the traffic light stayed at red or orange, many grew tired of staying home and gave themselves the unofficial green light. There wasn’t much the authorities could do to stop them. With every increasing day since last spring, I’ve seen more people on the streets—day and night—from my window. One day last the summer, the street vendors came back and never went back home again—not even during the deadliest weeks of the pandemic at the very end of last year.

The parties started last summer too. You could hear loud music and singing from more than one rooftop on any given night. Traffic on the streets also came back around that time, though it would not be until December that it returned to pre-pandemic levels.

December and January would prove to be the worst of the pandemic, and not just because of the spikes in cases and deaths. In those months, people lost all sensitivity and returned to their lives. It is still hard for me to believe what I witnessed, but the juxtaposition was real. Hospitals—private and public—became so full that people were being treated on the waiting area benches, and sometimes even on the streets. People were queueing for five or six hours every day in order to get oxygen tanks filled up for sick relatives, and social media channels were full of ads featuring oxygen providers and resellers. Everyone had a sick friend or relative.

I find myself thinking back to that time last February and early March when life went on as usual in Mexico. It seems strange in the memory: Why did we think we could be spared?

And yet parties and gatherings did not stop. They accelerated in number and grew in size. Some private companies even held year-end parties—maskless, massive indoor parties. This was the case of TV Azteca and several other enterprises owned by Ricardo Salinas Pliego, one of the most influential businessmen in Mexico. Salinas did not care about the backlash he and his employees received through social media, claiming they were just living without fear and were ready to face the risks of contracting COVID-19.

This was not shocking or surprising. Ours is a country where the president has openly refused to wear a mask or take any measure to enforce lockdowns since the beginning of the pandemic. In his own words: “Everything here is optional. Nothing is mandatory.” It was not a surprise either when he contracted COVID-19 at the end of January. Being sick didn’t even convince him to mask up; while infectious, he had a TV crew come to his house so he could record a message to the nation about his health condition.

Some ten days after his contagion, the president returned to his daily routine, without adjustments. At that time, which was just over a month ago, the COVID-19 traffic light in Mexico City was still red. But you would never know that by walking the bustling early February streets. All formal businesses remained closed, but many business owners resorted to selling their wares on the sidewalks just outside their formal establishments. Who could blame them? Given the lack of government support for businesses, this fend-for-yourself mood permeated throughout the city. Life was not the same as before the pandemic, but this was as close as it could get.

February was a very strange month. We had been on red light since mid-December when hospitals were completely full. Even private hospitals used by the rich were denying new admissions. There were many reports of oxygen canisters being stolen (at gunpoint) from the delivery services. But cases started declining slowly, and restaurants and shops were pushing for reopening. The government announced that the first vaccine doses for elderly people would soon be administered. Most of us spent all day on February 1 trying to get our elders registered at the vaccination website. Most of us failed and had to wait until some days later, when the site started working properly.

By the month’s end, vaccination of the elderly had started in earnest, with a bit less than a million vaccines applied in a week or so. Many elders had to stand in line for more than five hours to get their shots. Despite the obvious need for a better vaccination strategy, it was a great relief to watch people finally get immunized.

Restaurants with outdoors seating space have now been allowed to reopen. So have stores, with capacities limited. Public transportation is as crowded as ever (and no social distancing is possible inside a metro wagon or urban bus at rush hours). I am glad to report that most people on the streets are wearing masks (and around 70 percent actually wear it over the nose and mouth). More bicyclists are using the roads than ever before.

Not everything has opened up yet. Schools and non-essential workplaces are still shut down, though recently the public has been pushing for school reopening. It doesn’t appear people will tolerate home schooling and virtual classes much longer.

Mexico City may be treating the pandemic like it’s over, but the traffic light system remains at “orange with caution.” The road ahead of us remains a long one. Vaccination efforts are falling way short of their goals, and herd immunity won’t be reached anytime soon. But citizens want to resume their normal lives, even if it means risking new outbreaks.

I have been watching this year-long unraveling from my window, for I am privileged to have a job and family life that allow me to stay confined. I am not sure what to think about the future. Perhaps we have learned new ways of resilience that will be important to dealing with other emergencies when the pandemic recedes. But the government also has demonstrated a failure to lead, communicate clearly, and enforce its own rules in a crisis. And too many people here have shown too much indifference and stubbornness.

When this is over, I hope that we will be more sensitive to suffering and more willing to compromise, and to support each other.