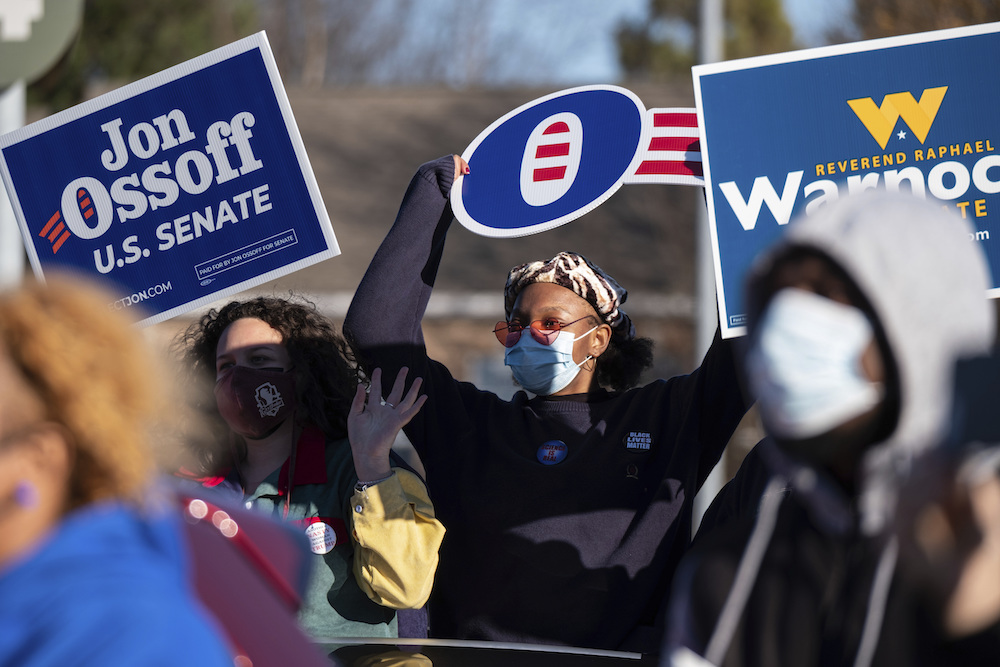 Supporters at a rally held for Rev. Raphael Warnock and Jon Ossoff during the first day of early voting for the Georgia U.S. senate runoff. Courtesy of Ben Gray/Associated Press.

Population migration out of the South proved to be a major force for national political realignment in the 20th century. But as the recent Democratic breakthrough in Georgia seems to indicate, it is the movement of people into the region that now promises to redraw the political map.

Joe Biden won the state by running up huge totals in metropolitan counties that have been among the most popular destinations for African Americans migrating to Georgia in recent decades. Not long after that triumph, New York Times columnist Charles Blow, having himself relocated from the Big Apple to Atlanta, urged Black Northerners to move south to enhance Black political power, and inspire similar political earthquakes across the region.

The election results, and Blow’s widely discussed invitation, represent the latest chapter in a long and circular story about domestic migration and its impact on the dynamics of American politics.

Between 1900 and 1940, 2 million Black people abandoned the South. They were pushed by extreme poverty and racial persecution, and pulled initially by the prospect of filling jobs in northern and midwestern cities left vacant by World War I-era disruption of European immigration. Not only were these migrants leaving the South, where they couldn’t vote, for larger cities where they could, but also, they would be casting their ballots in states where the electoral vote payload was more substantial. Northbound Black Southerners not only contributed to the shift of the majority of Black voters into the Democratic column in the 1936 presidential election, but by sheer numbers alone, they helped to push the party into a more sympathetic stance on civil rights.

Slow and grudging as it was, the Democratic Party’s move to combat racial discrimination in the South ultimately led to a mass exodus of white Southerners in 1964. Between the turn of the century and the mid-1960s, more than 10 million southern whites, seeking higher-wage factory jobs in and around cities like Detroit or Akron, headed north. By and large, these white migrants did not appear to divest themselves of the racism, religious fundamentalism, and suspicion of new ideas that had been imbued in them back home. As both voters and organizers, they would contribute to Alabama Gov. George Wallace’s surprisingly strong showings in northern presidential primaries in 1964 and 1968. They also helped to infuse elements of the traditionally Democratic northern white working-class with a newfound conservatism that left them ripe for Republican plucking.

By the end of the 1960s, however, those northward migrations, by Blacks and whites alike, started to reverse themselves.

Once a magnet for southern émigrés, the northern manufacturing states were then beset by a devastating combination of obsolescent technology, rising foreign competition, and continuing union pressure on wages. The resulting “Rust Belt,” stretching from Michigan to Connecticut, began to hemorrhage jobs and people to the more inviting meteorological and economic environs of the “Sun Belt.”

Predictably, Florida was the biggest beneficiary of the Rust Belt exodus, followed by Georgia and North Carolina, both of which gained nearly 12,000 new residents from the decaying Industrial North in 1973-74 alone. The first, predominantly white wave of northern newcomers seemed to find the region’s political climate strikingly attuned to their own priorities and values. So much so that worried liberals were soon warning that, ironically enough, a second Yankee invasion was rapidly enhancing the staunchly conservative South’s influence on national politics to the point of fueling the ominous rise of a far-right “Southern Rim.”

Northern population losses became the South’s political gain, as its share of the 270 electoral votes needed to capture the White House rose from just below 50 percent in 1968 to 63 percent after the 2010 census. Population increases also translated into a net gain of 29 congressional seats.

Yet, by the early 1970s, white Republicans weren’t the only ones heading South. That decade saw the once unthinkable reversal of the migration patterns of Black Americans (4.5 million whom had fled the South since 1940 alone). With the demise of Jim Crow and an accompanying surge in economic opportunity, net migration by Black Americans to urban and metropolitan areas in the South swung positive and stayed that way.

Of the roughly 347,000 new Black residents gained by net migration in the entire South between 1995 and 2000, Georgia accounted for nearly 40 percent. These new Black Georgians, like their counterparts in other states, were younger, more affluent, and better educated than the resident Black population overall, meaning they were also more likely candidates for political mobilization.

Current in-migration patterns in these states may augur well for the Democrats in future national elections. But in-migration also stands to intensify internal political conflicts as the cities and suburbs become not only more Democratic and diverse, but also richer and more powerful in the bargain.

Accordingly, since the year 2000, the Black share of Georgia’s eligible voter population has grown by 5 percent, while the white share has shrunk by 11 percent. During the same period, the state’s growing Latino and Asian populations saw their portion of the electorate increase by more than 200 percent.

The political implications of these demographic shifts became strikingly apparent in 2018 when African American Democrat Stacey Abrams came within slightly more than 50,000 votes of defeating her GOP gubernatorial runoff opponent, Brian Kemp. The core of Abrams’s support was the Atlanta suburbs, where people of color accounted for more than 46 percent of the population, as opposed to a national suburban average of 28 percent.

Alanna Madden, of the moving consultant firm, MoveBuddha, has offered a timely and gratifyingly precise new analysis of interstate moving patterns during the 2020 COVID-19 pandemic. It shows that Georgia’s most popular destinations for in-migrants between March and November were the four largest suburban Atlanta counties: Fulton, Gwinnett, DeKalb, and Cobb. Among them, only Cobb, at 49 percent, fell short of a majority nonwhite population. Together, these counties accounted for half of Joe Biden’s vote gains over Hillary Clinton’s 2016 showing in Georgia.

Madden acknowledges that much of the credit for the Democratic victories here belongs to the massive effort by Stacey Abrams and others to curb voter suppression and expand minority registration. Even so, based on data amassed by MoveBuddha, Madden ventures that recent in-migrants may have been critical to the breakthroughs as well. Her detailed analysis of survey information from 4,474 households who moved to Georgia during this period shows that 75 percent came from traditionally Democratic counties in other states. The data also show that a corresponding share of the new arrivals settled in Georgia counties with a recent history of voting Democratic as well.

The Democratic bastions of New York, Los Angeles, Chicago, Seattle, and San Francisco were the top five cities contributing to the outsider influx into Georgia. But even many of those coming from red states like Texas and Florida hailed from Democratic enclaves like Houston and West Palm Beach. Overall, 15 of the top 20 municipal destinations for all of Georgia’s newcomers were in counties that went for Biden in November 2020.

In-migration has been tied to Democratic advances in metropolitan counties in other southern states as well. For some time, a large stream of new arrivals from outside the South has emptied into the cities and large suburban counties of Texas, which attracted more than 82,000 former Californians in 2019 alone. This inflow helped Democrats pick up 14 seats in the legislature in 2018. One of the nation’s hottest destinations for domestic in-migrants is Williamson County, just north of Austin, which has gained some 160,000 new residents in the last decade. The county went to Donald Trump by nearly a 10-point margin in 2016, but flipped to Biden four years later, while Trump’s statewide margin shrank from 9 percent to 4 percent, as well.

North Carolina has also been a magnet for in-migrants, many from predominantly Democratic areas in other states, which have provided 4 in 5 of its new residents over the last five years.

Current in-migration patterns in these states may augur well for the Democrats in future national elections. But in-migration also stands to intensify internal political conflicts as the cities and suburbs become not only more Democratic and diverse, but also richer and more powerful in the bargain.

In Georgia, the MoveBuddha analysis reveals some striking imbalances in political clout between counties that benefit from in-migration and those not attractive to newcomers. Just seven of the 11 metropolitan counties boasting the 20 most popular localities for in-migrants gave Biden 242,000 more votes than the state’s 152 remaining counties combined.

Meanwhile, though Georgia’s 129 Trump counties may show up on an election map as a menacing ocean of red threatening to overwhelm 30 islands of Biden blue, the reverse is actually closer to reality. The 80 percent of Georgia’s counties that went for Trump may be home to 70 percent of its white voters, but many of those counties are in economic decline and steadily losing residents to Biden counties, which already account for 55 percent of Georgia’s registered electorate.

Such imbalances can readily ignite bitter resentment among those who find themselves losing ground both politically and economically—and trigger a defiant, knee-jerk rejection of any proposed changes in law or policy, no matter how minute.

For example, the recent, striking swerve to the right among North Carolina’s Republican legislator represents more than a xenophobic reaction to an influx of Latino immigrants. It also reflects a backlash against a domestic invasion of young, diverse, highly educated, and more liberally disposed professionals drawn to dynamic metropolitan areas like Charlotte and the Raleigh-Durham-Chapel Hill triad, where President Biden ran up huge margins in November.

With in-migration likewise fueling the concentration of political firepower in the dynamic cities and suburbs of Texas and North Carolina, these states may ultimately follow Georgia into the blue column in national politics. But within the respective states, the potentially transformative political effects of such an influx stand to be delayed or blunted to some extent by the chronic overrepresentation of sparsely populated and deeply conservative rural counties so common to southern legislatures.

Meanwhile, an ongoing procession of newcomers into metropolitan areas promises to leave these already embattled rural counties at an even greater economic and demographic deficit. As a result, the struggle for partisan advantage within the increasingly polarized political interiors of these states is likely to be both bitter and intensely competitive for some time to come, regardless of what their exterior colors in presidential contests might suggest.