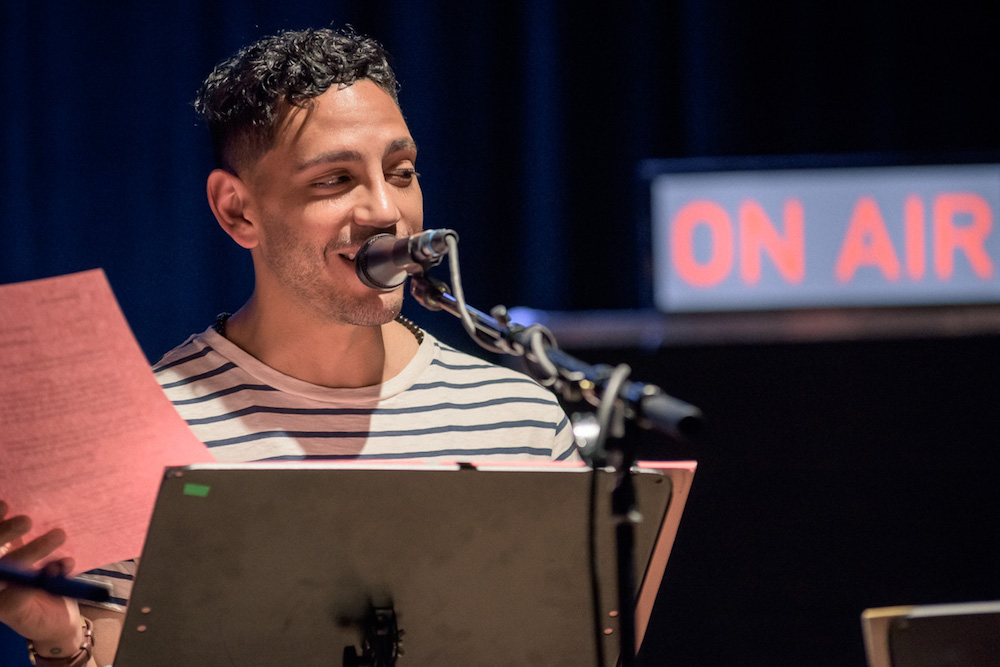 The other day I was watching the Aretha Franklin documentary Amazing Grace, which was filmed while she was recording her album of the same name at church in downtown L.A. in 1972. The movie’s climax comes when 29-year-old Aretha performs her rendition of the title track, “Amazing Grace.” As soon as she started singing, I started weeping. By the time she got to the line “Was blind, but now I see,” I was experiencing full body chills.

I couldn’t stop crying. God, I prayed, I need a break, I need a win, and I need some of this grace.

In one fell swoop last spring, the pandemic took away some of the biggest opportunities of my career:

1. My first lead on a TV show, a series regular role that never ended up happening. It officially got scrapped because it needed a live studio audience and one of the cast members sadly and unexpectedly died from an aneurism.
2. Three international speaking gigs at large festivals.
3. Another TV job in the mecca, New York City.
4. And the chance to do my one-man show, The Real James Bond… Was Dominican!, on a multiple city tour.

Just like that, I went from being poised to make more money in a month than what I’d earned in my entire life to praying that my unemployment would go through and that paying rent wouldn’t become an issue (it did).

This pandemic may have challenged my financial security and my physical safety, but worst of all, it took away my place of worship: the stage.

Many months into the pandemic, my heart was still filled with fears and doubts around whether I chose the right profession, whether I would ever recover mentally from a severe depression, and if I had invested too much time and money in being an artist.

And then I watched Aretha singing in that church full of souls ready to receive and give, celebrate and sing, and be moved.

And grace my Fears relieved
How precious did
That grace appear
The hour I first believed.

That was a tipping point. I needed this reminder of grace, and more importantly, I needed to remember the power of what happens when people gather and celebrate.

This whole pandemic, I was so focused on surviving and feeling better that I never made space to grieve.

I was born in New York City; the theater is what unlocked my magic. Seeing John Leguizamo’s one-man shows at 15 years old was a reminder that there was room for someone who looked like me. Witnessing a man of color being heard, being received—a Latin man, specifically, who comes from where I come from—was a revelation. I knew right then that I wanted to be on that stage one day. Those communal gathering between audience and performer has been holy to me even since.

Aretha was born into the church, her father was a pastor, and the choir was where she found her magic, put in her time, and got to share her gifts. Church for her was not just a place of worship to a god, but a home for her craft, a place to express her love.

Seeing Aretha on stage, I finally let myself weep for the loss of that great love. As she blessed others and was blessed in return, I remembered that’s what performance does—it feeds us, it generates hope. We need these spaces of performance, temples of song and chanting, churches of theater, art, dance, devotion, and love.

Who knows when we will stand in front of a packed-ass house again? It’s something to grieve, desire, daydream, and have absolute rage about. I’d give anything to be in a slow tech rehearsal right now.

Live performance contributes more than $760 billion annually to the U.S. economy, according to the National Endowment for the Arts. But two-thirds of performers are now unemployed. Millions of people who have dedicated their whole lives to doing one thing—a thing many people probably told them they were crazy for pursuing—can’t make a living at it right now. The arts have always been vulnerable, and now they’re in an even more precarious of a situation.

Of course, even without income or rent money, most of the artists I know in Los Angeles are still making art. Many theater companies are doing so at an extraordinary rate—La Mama and Culture Hub, for example, are producing shows on a weekly basis from artists all over the world, while creating and pioneering innovative online video conferencing platforms for performing and sharing a theatrical experience—because Zoom, Skype, and Google Hangout are certainly not the most aesthetically pleasing of platforms.

Seeing Aretha on stage, I finally let myself weep for the loss of that great love.

Even though the best virtual space still lacks the intimate magic and shared energy of a packed room, it is sorely needed. It may not allow for the traditional covenant between artist and performer—that we have both entered a new space together, and will stay for however long we will both agree to be present here, without a screen between us, without the distractions of our home, poor internet connection and improper lighting. But it still raises morale, creates community, and lightens the darkness.

How sweet the sound
That saved a wretch like me

It’s about halfway through her rendition of “Amazing Grace” when Aretha herself starts crying. Then there isn’t a dry eye in the house; everyone is letting something go, being moved, and finding what they need.

Ungrieved losses become open wounds, and open wounds hurt, they fester, and they grow, unless we let them go. That’s what performance does, that’s what art does. It feeds us, it generates hope in us, and it allows us to see, stop, and take a step back.

Only then, only when I stop rushing, only when I am able to be still, can I begin to grieve, to see what still hurts, and recognize that I’ll never gain back all that was lost. Only by taking the space to grieve can I recognize that others are also grieving—that I am not alone in this.

In the essay Notes on Grief, author Chimamanda Ngozi Adichie writes, “Grief is forcing new skins on me.” Grieving provides me with the strength and tools to be present in the face of so much that is scary and uncomfortable. It gives me patience as I learn new things about myself and watch old wounds come to the surface. It builds a new skin of kindness around me, and it reminds me I didn’t make a mistake choosing to be an artist. I don’t have to doubt all my life choices, and that I’m not alone.

Grieving strengthens my commitment to creating more art that will be shared in safe and healing environments in which listening can take place and habits can be transformed. And it gives me a new level of appreciation for gathering, the energy of other people, shared sweat in hot rooms, contagious laughter and contagious tears, and the thunderous roar of an applause.

“And grace will lead us Home,” sings Aretha, and my thoughts turn to the stage, a home as far back as I can remember. Who knows when we’ll be together again—in our churches, homes, and places of worship—full to the brim with bodies, spirits, breath, hooting and hollering, energy, excitement, and anticipation.

In The Odyssey, Odysseus knows he can never return to how things were before he leaves Ithaca to fight in the Trojan War, but he keeps sailing all those long, lonely years. He finds courage and resilience in the face of all that is hostile, unfair, shitty, and indifferent in the hopes of returning home with new eyes and a renewed spirit.

They say that grief has steps. I feel like calling them steps is really misleading, because it gives the illusion that coping with grief is a linear path, when in all actuality it is more like juggling many things all at once. While we all go through grief, none of us have the same experience.

My home has changed during this pandemic, many homes have changed, I have changed. There is a lot to juggle. Remembering and honoring that there is no right way to grieve the facts that loss and change have occurred gives me the strength to keep going. As the song goes,

I once was lost
But now I’m found
Was blind, but now I see.