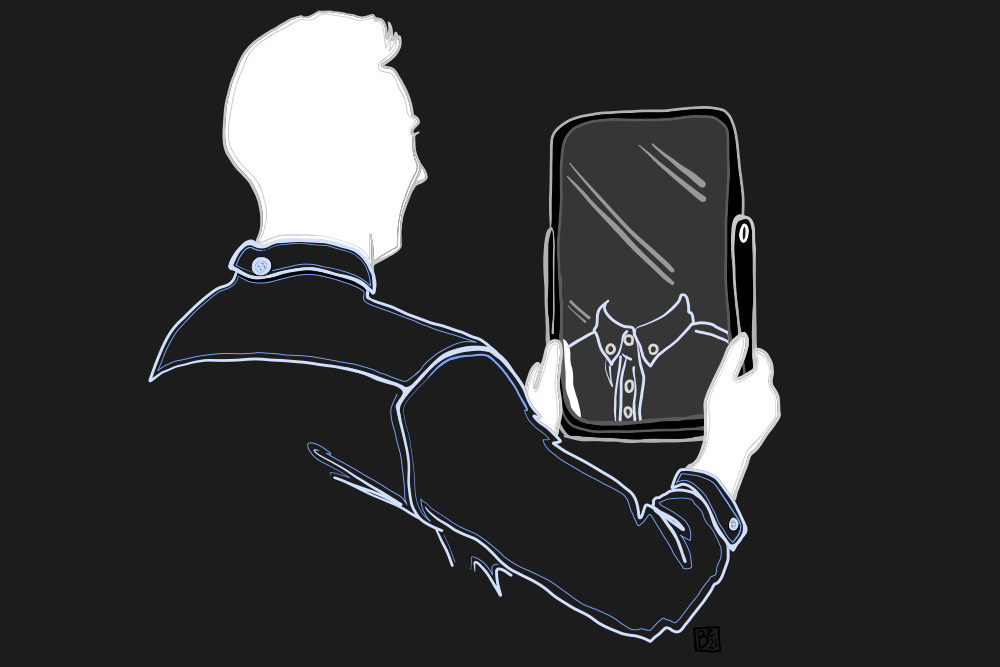 Obviously, revisionism is a problem. In America, there are real children in real schools reading textbooks that say that black people thought slavery was awesome. But at least revisionism requires some time to go by. Revisionism concedes that reality cannot be altered, and so it exploits the fact that memories fade. There is another phenomenon that makes no such concession. It is not a revision of what one saw in the past; it is a real-time filter that alters what one is seeing before the rest of the brain can even process it.

Circa 1978. It was just another rehearsal at our junior high school chorus until Mr. Faber* passed out the sheet music for the new song.

My face got hot. My reaction immediate and visceral. More than a child could process.

Mr. Faber sat down at the piano and started to play—a run-through to let us know what was expected.

I tried to go along, to laugh it off as a weird prank or a test.

But after singing the full song once, I couldn’t ignore my brain confirming that this was really happening. I had to say something.

I tried to be light about it.

“Ohhh, I wish I was a slave again!” I sang, more or less to the tune. The room went from a hive to a tomb.

“Are you serious?” I continued, attempting a laugh. “You can’t be serious, Mr. Faber. Dixie??”

The other children, most of whom were not black, sat frozen. Mr. Faber (who also was decidedly not black) stared at me from his baby grand. Even back then it struck me as strange that a concert-level pianist worked in a junior high school. I expected him to be angry, but he wasn’t angry at all. He was absolutely serene.

He went there immediately. It winded me. This was a junior high school chorus, but it wasn’t just any chorus. It was not the huge everyone-gets-a-trophy affair that I also sang in as a ringer. This was the elite mobile Madrigal Chorus, membership in which allowed you to leave school in the middle of the day and perform at senior centers and grand openings all over New York City. It was the center of my social life.

I wasn’t going to quit. Not over a song. I had no response for Mr. Faber, which I suppose became my response. He started “Dixie” from the top again.

I probably didn’t even say anything some weeks later when he brought us “Swanee.”

Swanee, how I love you, how I love you
My dear old Swanee.
I’d give the world to be
among the folks in D-I-X-I-Even though my mammy’s
waiting for me, praying for me
down by the Swanee.
The folks up north will see me no more
when I get to that Swanee shore.

Other songs we sang were also “problematic,” as they say these days. I now understand that the “boy” addressed twice in the first verse of “Chattanooga Choo-Choo” was a full-grown man. And the line “You make the cotton easy to pick, Mame” gratuitously tainted an otherwise unremarkable tune. For what it’s worth, there were only two full-on Confederate anthems in our large Americana repertoire. Both were, however, in heavy rotation—“Dixie” was often our big finish, and “Swanee” was part of a medley Mr. Faber called “Sentimental Journey.” Both were major crowd-pleasers. I remember every word of each, just as I remember the night my parents first heard me do those songs, at the big annual school pageant.

The house was packed. I think we’d ended with “Dixie.” I can still see all the parents pouring out of the auditorium after the show, and my mother moving upstream like a salmon toward Mr. Faber’s piano.

We sang Confederate anthems in front of our parents, all of us, in an auditorium that had to hold a couple hundred people and, after it was over, only my mother complained. The other parents all filed out like nothing had happened.

I knew why, and I was mortified. I certainly understood her reaction—it was my reaction too. But I was a young boy, still embarrassed by the fact of a mother, let alone a mother complaining to my choral director. I stood in the wings and watched. They talked for what seemed like a long time. Eventually my mom turned and walked away.

My parents left it up to me whether to stay in the chorus. I stayed. And on balance it was worth it. I felt that way then, and I feel that way now. During that same time, I played the lead role in Oliver, and the experience shaped me. As an adult, I’ve played bass on a few proper stages, in front of enthusiastic and good-sized crowds; honestly, none have matched the scope and majesty (in my mind) of the parents in that little school auditorium erupting into applause during my “Where is Love?” It was perhaps my first win, and I wouldn’t trade it for anything.

Thirty-five years went by. The internet was invented. Then Facebook appeared, and around 2013 I discovered a group for alumni of my junior high school choruses. I joined immediately.

At first, I enjoyed the group very much. I had so much fun in chorus and Madrigal, and I wanted to catch up and reminisce. The racist songs are not my biggest memory of that period—the applause is, followed by the cast parties. The “Dixie” memories aren’t especially powerful or unpleasant. Merely discordant. The memories were there, however—and something I have found interesting about this reunion generation (old enough to remember when a kid moving away meant you never saw or heard from them again, but young enough to make full use of social media now) is the opportunity to revisit childhood events, seen now through adult eyes. I saw such discussions as part of what the group was for.

My initial efforts to broach the subject were cleanly overlooked by the group. Crickets. I considered letting it go, but instead messaged Mr. Faber directly. I didn’t need anyone to fall on their sword; I just thought a quick casual reality check would be nice, and appropriate. An acknowledgement that those song selections were misguided. Also, I was curious when they fell off the roster; maybe ours was the last year anyone performed them. These were the things I asked Mr. Faber, but I never received a response (which, I suppose, was his response).

It all started feeling a little gaslighty, so about six months later I posted about the songs again. This time I was not stonewalled, but the responses that came were disappointing. Most of the people who responded had not been there, and seemed to have more of a problem with me saying something critical of Mr. Faber than they did with Mr. Faber making kids learn and sing “Dixie.” But the replies from the few who had been in Madrigal with me were unexpected.

I don’t fault my chorus mates for trusting Mr. Faber back then, and not realizing that he had us singing weird racist songs. We were children. They didn’t know because it did not affect them directly, and no one told them.

That’s the part that I am only just now seeing, decades later. We sang Confederate anthems in front of our parents, all of us, in an auditorium that had to hold a couple hundred people and, after it was over, only my mother complained. The other parents all filed out like nothing had happened.

No one who responded to my Facebook post mentioned their parents saying anything to them about Dixie or the other songs. Not immediately after the concert or ever. And then those kids grew up.

Maybe 10 years ago I was in a judge’s chambers discussing a motion that had been brought by the producers of an awards show. The producers, whose show focused primarily on black artists, were requesting an immediate injunction against a competitor. Time was of the essence because the show was to be taped the next day.

I sat with a colleague on either side of me: a white guy and a Latina. The judge was white and old and had never heard of this awards show. We explained it to him. And the judge laughed and said, “Well. I think that I will give them whatever they want. As long as they bring me a mammy to put in the corner of my office!” He chuckled heartily.

I tell this story knowing not only that no one else who was there remembers saying or hearing that; I tell it certain that no one else who was there even perceived it at the time. It was clear from the glazed eyes on either side of me, they were letting the words pass right through them. Some of you reading this will know what I am talking about. I was the only black person in the room, and as such I was the only one experiencing what was actually happening. The non-black people were in that altered state that screens out anti-blackness in real time, like how our brain screens out the sensation of the ambient air on our arms. It wasn’t happening even while it was happening. I was sitting between two colleagues—two friends—but I was alone.

I sang “Dixie” alone, too. I was on a crowded riser surrounded by the other tenors and towered over by the altos, but I was alone. Look away, indeed.

The January 6 attack on the Capitol looked like a negative print of The Birth of a Nation—America’s first, worst nightmare. The government’s response so far seems methodical and careful; tentative, even. Law enforcement suddenly appears uncertain what to do with folks who have broken the law. Due process looks nice. I’m sure that, eventually, a handful of people will do a little time for attempting to hang the Vice President of the United States. But, compared to the swift and deadly state violence that is traditionally triggered by, say, a black person reaching for their wallet, or the suggestion that my life matters, official reaction has been strikingly respectful.

We all knew the attack was coming that day. Still, so many people, across all levels of American society, looked directly at the threat and did not see a threat. On January 6, everyone watched the same thing but, once again, black people saw it alone.

And when the next attack comes, most white people will be as surprised as they were the last time. They do not see; it is who they are. When a police captain at a press conference is comfortable saying of a mass murderer, “Yesterday was a really bad day for him, and this is what he did,” it is evident that, even now, the filter remains firmly in place.

The Nazis are bad, but it’s the not-sees who are going to get us all killed.