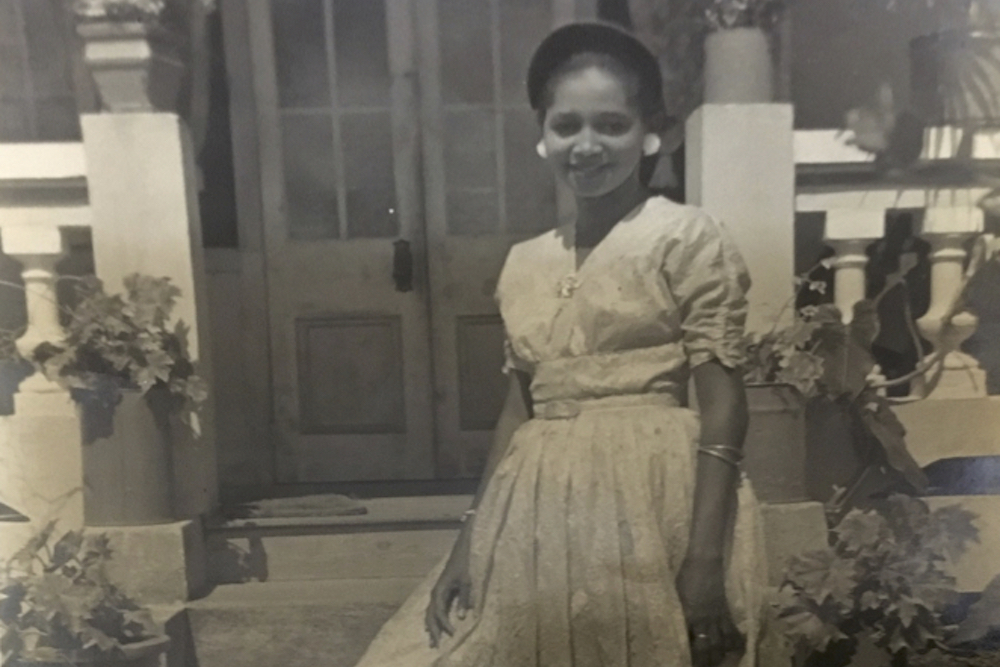 Dexter Voisin's mother, Irma Voisin, taught him to pave a path forward for others. Courtesy of Dexter Voisin.

“The true focus of change is never merely the oppressive systems we seek to change but the oppressor that is planted deep within each of us.” —Audre Lorde

In the 1960s, I spent my formative years in the West Indies before migrating to the United States for college and then to Canada 33 years later. My beautiful, elegant, brown mother taught me the importance of cultural pride, starting when I was as young as 5 years old: “When you leave the house, always make sure that your shoes are shined, your hair is combed, and your clothes are looking their best.”

At the same time, she and her parents, influenced by the vestiges of colonialism, schooled me that whiteness was superior. “I want a grandchild with soft and not kinky hair,” I remember hearing my mother say.

Colorism is a form of discrimination against people of darker skin that ethnic groups enact toward each other. Rooted in slavery, it reproduces the ideology that whiteness is superior. Many sway to its song, like a hypnotic dance.

“One of the reasons people cling to their hate so stubbornly is because they sense, once hate is gone, they will be forced to deal with pain.” —James Baldwin

Even today, my own slim, brown frame remains armed with the politeness that my parents taught me, and I know my accent is notable for its ambiguity—many have said that it sounds polished. This made me palatable to many of my white colleagues, who quietly prized that they had a Black colleague, one who was foreign born. I checked at least two acceptable diversity boxes. In addition, having an educational pedigree from Ivy League universities and having earned tenure at a similar institution at times provided some counter narrative to the myth of Black intellectual inferiority that commonly hovers over Black academics in white spaces.

I had been taught by life’s experiences that I would have to work twice as hard to get half as much as my white colleagues. I became the first nonwhite person in the 120-year history of my Ivy League institution to be promoted from assistant to the rank of full professor. Despite my Columbia University Ph.D., I am commonly told by well-meaning white liberals and even by Blacks, “You sounded intelligent during that interview.”

Then there are those agonizing times when my Black excellence, hard work, and integrity are readily castrated as soon as a white narrative contradicts them. Black culpability and white innocence are as American as apple pie. Driving while Black, bird watching while Black, teaching in the academy while Black, drinking coffee at Starbucks while Black—many of these violent injuries have become more visible due to social media, but they have been hidden in plain sight for over 400 years. Rooted in white supremacy, liberal white violence is sophisticated, at times it is patronizing, wielded by silence, claiming ignorance or viewing Black bodies in privileged spaces as being trespassers.

White folks do not hold a monopoly on devaluing Black expertise and leadership. Recently my soul sister Black friend of 20 years, without malice, earnestly admonished me to pay for a two-hour seminar taught by a white woman so that I could learn more about white privilege. I reminded her that I am considered one of the foremost experts on structural inequality in North America. I had been in the midst of a global book tour that COVID-19 disrupted—dedicated to sharing the stories of Black youth and their families who, as James Baldwin put it, are “living in the shadows of the stars and stripes” and living in communities as President Bill Clinton had said “had not yet been touched by America’s prosperity.”

The communities I wrote about are suffering disproportionately right now, as they have for many years. But America seems to be taking notice. The tremendous racial disparities of the COVID-19 pandemic alongside the brutal murder of George Floyd at the hands of a white police officer have jolted the moral awakening of millions and laid bare the longstanding, inhumane, and deadly effects of systemic racism.

My beautiful, elegant, brown mother taught me the importance of cultural pride, starting when I was as young as 5 years old.

White liberal silence is sophisticated, but no less suffocating than the everyday racism that restrains Black lives. Such violence commonly manifests in many ways after a savage killing of a Black life: piercing stillness; apologizing to Black friends and offering “help” without self-examination of how one contributes to or benefits from white advantage; holding onto the urge to be innocent; and issuing performative public statements as a form of racial insurance, yet sidestepping the responsibility to make meaningful change or having the courage to speak and then act.

At times, we all falter when we need to act. We fail to do the painful but necessary work of peeling back the deep, insidious layers of the white supremacy that spins its web around us all—from the cradle until we are laid to rest in the grave. Although many would protest, we are all sinners who have fallen short when it comes to perpetuating white supremacy.

Yet simultaneously, many educated, affluent whites numb their pain about racial inequality by engaging in the pornography of pain: peering into someone else’s racial suffering. They ask Blacks to exorcise and perform their trauma and subjugation: “When did you first become aware of being Black?” “When did you first experience discrimination?” Others cope by intellectualizing the conceptual differences between hidden prejudice and institutionalized racism. They question whether racism is really institutionalized and widespread or only enacted by a few misguided actors. The very essence of white advantage is having the luxury not to acknowledge such advantage. How do you convince someone of their unearned white advantage when their very enjoyment of such benefits is based on remaining ignorant of it and maintaining deafening silence?

More transformative questions would be, “When did I first become aware of my white privilege or advantage?” and then, “What will I do with these feelings?” Courageous questions like these can prompt brave action and real meaningful social change.

When racist violence explodes, marginalized persons do not want your pity. We want your courageous action.

“One of the most difficult things is not to change society but to change yourself.”
—Nelson Mandela

Both Blacks and whites often resist coming together with nakedness. We resist the certain truth that our collective healing can only begin when we work together to perform an honest autopsy on our tangled past.

The powerful media pendulum has swung away from George Floyd’s murder and the Trump Show back to America leading the world with the highest rates of COVID-19 infections and death. There is little mention now of the large multicultural, multigenerational coalition driven by agony that took to the streets in the summer of 2020 to protest the ongoing subjugation of Blacks and the stubborn refusal of multiple systems to address anti-Black systemic racism.

I know this to be true: Despite our multiple privileges, wealth, illustrious careers, or sufferings, we all live and move toward the same end. We are all given one lifetime, with a time to be born and a time to die.

In this lifetime, we sow the seeds of the future that our loved ones will most assuredly receive. We wrestle with the societal narratives we have inherited. We can also rewrite our personal narratives of what is just. We all have many freedoms as we choose how to spend the limited time we have on this earth. As my mother and those who came before me have on my behalf, I hope to pave a path forward for others.

How will we all embrace our date with destiny?