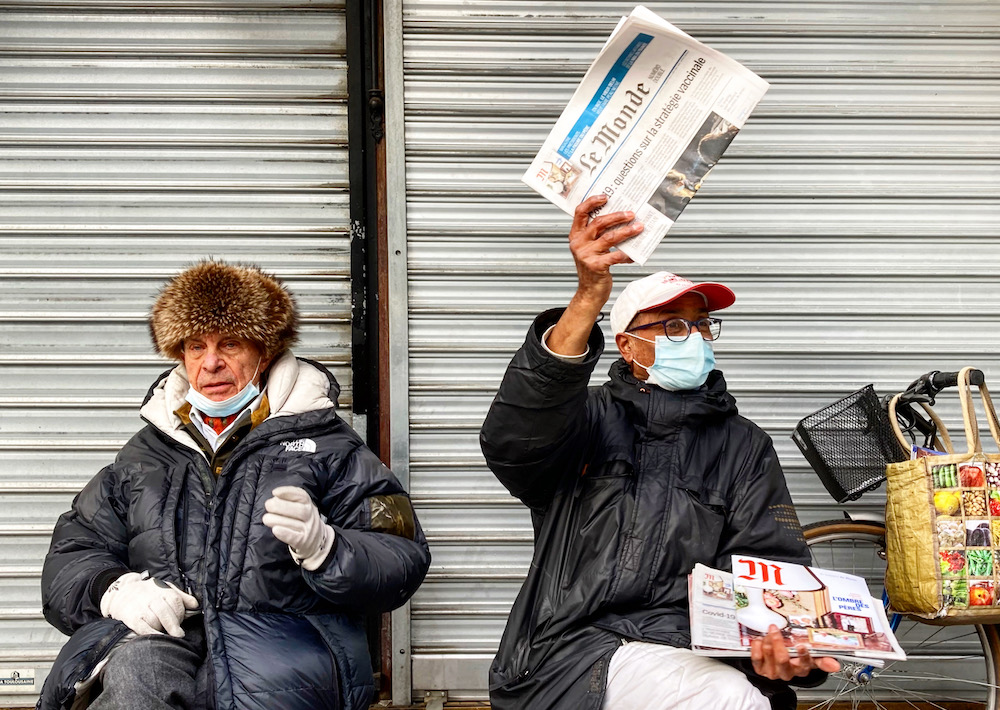 "Now, as we settle into a third lockdown, to encounter someone without a mask in the street is startling," Olivia Snaije writes from Paris. Courtesy of the author.

What is the new normal here in Paris? The answer is one that’s less grouchy than you might expect. Mais ça commence à bien faire—it’s getting a little much.

We’re more than a year out from #TheMoment, March 17, when the first lockdown in France began. At that crossroads where countries made different political decisions, France chose to put health first.

Now, as we settle into a third lockdown, to encounter someone without a mask in the street is startling. Every few streets or so, outside every pharmacy, there are little collapsible huts where people can get a rapid antigenic test. It’s also easy to get PCR tests, which are carried out in labs. All COVID-19 tests are free, and people are encouraged to get tested if they have the slightest doubt of infection.

After a very slow start, France is speeding up its vaccination campaign. Now besides vaccination centers, pharmacies and doctors can administer the Astra Zeneca jab and will soon be able to do the same with the Pfizer and Moderna vaccinations. At first, a sizeable portion of the population was resistant to being vaccinated. Then, when vaccine supplies were slow to arrive in the European Union, the joke was that the contrarian French suddenly all wanted to be vaccinated.

Political figures and personalities were vaccinated publicly in order to encourage those who were reticent. In a moment of delightful silliness, when Olivier Véran, the Minister of Solidarity and Health, was vaccinated in public with his shirt half open, Culture Minister Roselyne Bachelot (who was more recently hospitalized with COVID) commented on television that she had given him the nickname “Jolitorax” referring to a character in the comic, Asterix. “Jolitorax” is translated into “Anticlimax” in English Asterix editions, but in French, the name literally means nice-looking chest.

Such moments of levity are important in a country where we haven’t been able to go to a bar or restaurant since last October, and probably won’t be able to until May.

Because France is part of the European Union, we have a tendency to compare ourselves to our neighbors (most often Germany). France’s first lockdown of nearly two months was one of Europe’s strictest, and we had a second lockdown which lasted a month and a half in the fall. We have been wearing masks any time we leave the house since July 20, and have undergone two successive curfews. One began on December 15 and included New Year’s Eve; it kept people inside from 8 p.m. until the morning. The second curfew started January 16, and it required people to stay off the streets from 6 p.m. until morning. Despite these efforts, one year later we’re approaching 95,000 deaths from COVID.

Now, France has locked down for a third time, due to the British variant which accounts for three-quarters of the new cases. As the EU and the UK spar over vaccine doses, Boris Johnson’s government is in discussions as to whether France should join their “red list” from which travel into the UK is banned—“Now that they’ve given us their variant,” sniped my neighbor. On the bright side, we did gain one hour this time around: curfew begins at 7 p.m.

Surprisingly the French—who are famous for being grumblers—have been quite reasonable on the whole, compared to some of their neighbors, from Belgium to Austria, who have staged anti-curfew riots, even though they have had fewer restrictions imposed on them. But patience is starting to wear a little thin.

Instead of rioting, Parisians have spent the past year reading. With all cultural venues and festivals closed or canceled, people turned to books, and despite France’s 3,300 independent bookshops being closed for three months during 2020, losses were only 3.3 percent compared to the previous year. Teenagers made a comeback hit of the classic Arsène Lupin series by Maurice Leblanc, set in the early 1900s about a gentleman thief, following the success of the Netflix series, Lupin, based on the books. A recent decree passed that gave bookshops the status of “essential businesses,” meaning that, along with food shops and pharmacies, they can remain open during the current lockdown. Curiously, record stores, florists, hairdressers, and chocolate shops have been allowed to stay open as well.

We’ve also been cycling. According to the organization Vélo et Territoires, the number of bicyclists in Paris has increased by 70 percent since last May. It helped that city officials transformed an additional 50 kilometers of traffic lanes used by cars into bike lanes. There are evident growing pains; as amateur or aggressive cyclists vie for space with pedestrians and scooters it’s led to encounters that can degenerate into shouting matches.

Still, the heart of Parisian daily life is its cafés, and without them, Paris doesn’t seem like itself. The most recent closure of bars and cafés was October 6, while restaurants closed for service October 30, leaving only the option of takeaway and delivery.

Surprisingly the French—who are famous for being grumblers—have been quite reasonable on the whole.

The enterprising owner of our café downstairs, a Kabyle man born in Algeria, reinvented his establishment with grace and humor over the various lockdowns, first offering frankfurters and sandwiches, then adding to the takeaway menu homemade couscous and mulled wine. During the winter months, in fact, while Germans were deprived of their glühwein in Christmas markets, Parisians converted to drinking mulled wine in order to linger in front of cafés offering takeaway beverages.

Now that it’s spring, people often congregate outside the takeaway window drinking beer. This is technically illegal and defeats the purpose of the closures, but at least they’re outside, and it gives us a semblance of normalcy. This March, during a wave of spring-like weather, the police banned alcohol in certain areas of Paris, such as the Canal Saint-Martin, where large groups had begun to gather.

Masked Parisians have been getting together legally throughout the year—to continue a tradition of demonstrating. There have been protests against police brutality, sexual harassment, poverty, nuclear weapons, and working conditions, and demonstrations in support of medical staff or teachers, climate change policy, and of political prisoners in Turkey, Algeria, or Saudi Arabia. A motley crew of conspiracy theorists, and groups against restrictions and mask-wearing, pop up in various cities to have their say as well.

Paris real estate remains expensive, and unless you’re very wealthy, apartments are small. The chic neighborhoods, for the most part on the city’s Left Bank, have emptied, their inhabitants having decamped temporarily to second homes in Brittany, Normandy, or the south of France. The first lockdown led to a rush of families deciding to leave the city permanently, often for the northern suburbs, expediting a trend that began with the extension of metro lines going just outside the city’s perimeter.

But most Parisians are still stuck at home in confined spaces. In my north-eastern neighborhood of Belleville, however, which is rapidly gentrifying but remains ethnically and socially mixed, the streets are packed with people going about their daily business or enjoying one of the largest parks in Paris, the 19th-century Buttes-Chaumont. Small children, all masked, skip along joyfully holding hands as their teachers take them for a walk.

Childhood is one area where France stands out: following the first lockdown, the government made it a priority to keep schools open to avoid disrupting education. According to statistics gathered by UNESCO, France’s schools were among the European schools least likely to close over the past year. Children ages 6 and up are required to wear masks, and classes are held in person as usual (except for high schools where classes can be also be attended via Zoom). This has been a godsend for most parents, especially those who can’t work remotely. A recent poll showed that 73 percent of parents and 89 percent of children considered their experience together during the pandemic a positive one for their family.

University courses, however, have all been online, which has been particularly difficult on foreign students who are new to France and are stuck in front of their computers in tiny rooms. And many French students have lost part-time jobs with parents unable to help out. A group of restaurants that had served meals to hospital staff a year ago is now offering meals to students in need. In January, President Macron announced that students could have two meals a day at the price of 1 euro.

Despite being provided with as much uninterrupted schooling as possible, the French are currently experiencing what is called a “baby crash.” This is also surprising. France has Europe’s highest fertility rate, and at the beginning of the first lockdown some specialists predicted a baby boom. But statistics show that nine months after the first lockdown, birthrates were 7 percent lower than in 2019.

Last but certainly not least, culture, an essential component of city life, is still on hold. Lucas Destrem, who specializes in urbanism and political and cultural geography, recently re-designed the iconic Paris metro map in support of cultural venues waiting to open. His approach was to replace the metro stops with names of museums, art centers, cinemas, theatres, libraries, or music conservatories. The map won media coverage and wide praise in the cultural milieu.

In the meantime, some Parisians are soothing themselves in an unusual way: by behaving like the tourists who typically crowd our streets. It’s become more common for Parisians to treat themselves to a weekend in a hotel, and hotels, in turn, are turning to locals for business, such as the new Hotel Paradiso. Operated by the production company and movie theatre chain MK2, the hotel offers giant screens in each room, and an open-air cinema on the roof, with popcorn, snacks, and a restaurant that delivers meals to rooms. For Parisians who are already avid movie-goers and have 200 euros to spare for a rare treat, this could provide a way to fill this unusual, and temporary, cultural void while we wait for what will happen next.