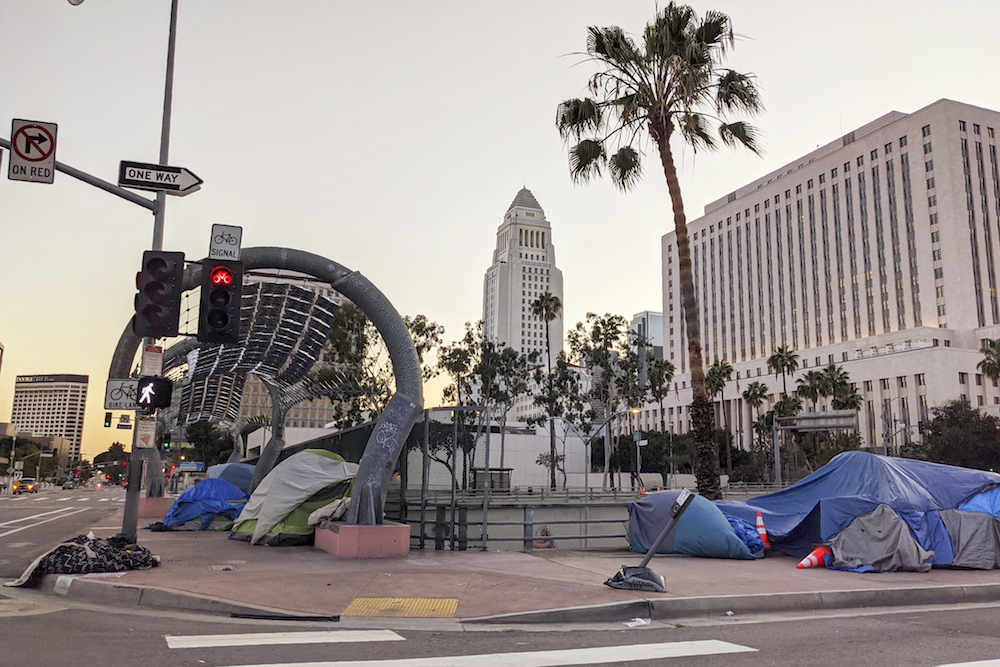 California has a huge problem that it can’t remove with a recall election.

The problem’s name is Los Angeles.

We Californians love to blame our woes on San Francisco, an easy target with its wealth, powerful politicians, and pretentious progressivism verging on parody. But in recent times, it’s been your columnist’s home base of L.A. County—home to one in four Californians—that undermines our state the most.

California as a whole can’t prosper if its biggest and most diverse metropolitan area keeps floundering. Since the early 1990s recession, L.A. has been a drag on California’s, and the nation’s, economic growth and employment. L.A. hasn’t matched the gains in wages, education, health, or voter turnout found elsewhere in the state. And it is Los Angeles that has been the biggest driver of high poverty rates and rising inequality across the state.

L.A. is also where California lost the pandemic. The county of 10 million has one-third of the state’s COVID-19 cases and 40 percent of the deaths. If Los Angeles had controlled COVID-19 better, California as a whole might not have been compared unfavorably to Florida.

L.A.’s outsized coronavirus failures also had a statewide impact. State officials never really managed to come up with a COVID-19 framework that fit both small counties with few cases and California’s largest county, a virus hotspot. So, they kept changing frameworks and guidance, creating public confusion over what was permitted under COVID-19.

Los Angeles’s failures at pandemic response also made it harder to justify reopening elsewhere. Maddeningly, the leadership and teachers’ union of the dysfunctional Los Angeles Unified School District—not content to prevent only L.A.’s own students from returning to the classroom—used their political muscle to block the governor’s plans to reopen schools not just in L.A. but statewide.

In this context, it made sense that Gov. Gavin Newsom broke with precedent and held this year’s state-of-the-state speech in Dodger Stadium, rather than in the Capitol in Sacramento. A full statewide recovery from the pandemic requires a big comeback by our largest county. If L.A. doesn’t control the virus and repair the economic and educational damage of the pandemic, the state of our state will be deep trouble—and Newsom could well be recalled from office later this year.

But the stakes of getting Los Angeles right extend beyond the fates of the governor or the state. L.A.’s struggles point to larger American failures to ensure that prosperity and health are broadly and equitably distributed, and support the poor, immigrants, and communities of color in building foundations of education, higher-wage employment, and family wealth.

As outlined in a terrific 2020 report, “No Going Back L.A.,” from the Committee for Greater L.A., Los Angeles is on the front lines of this struggle because it experienced major demographic change ahead of the rest of the country. The county’s share of people of color has risen from 47 percent in 1980 to 73 percent today. During the same time, L.A. lost its manufacturing base, middle-class jobs fled, and wages stagnated. Persistent and systemic racial disparities cost Los Angeles more than $300 billion in annual GDP, according to USC’s Equity Research Institute.

Ending these disparities in Los Angeles, and around the nation, is an epic task of integration—connecting people, opportunities, jobs, schools, businesses, healthcare, and public policies in a way that keeps people and places from falling behind. But L.A., despite its talent for creating culture that connect people around the world, is rotten at integrating itself. Its peoples, neighborhoods, and institutions are disconnected and poor at collaboration, making life feel isolated and cruel.

California as a whole can’t prosper if its biggest and most diverse metropolitan area keeps floundering.

This is not a new problem. Back in 1946, the progressive journalist and former state official Carey McWilliams wrote that Los Angeles is “chronically unable to integrate its population” and provide social stability. “There is something disturbing about this corner of America, a sinister suggestion of transience,” he wrote. “There is a quality, hostile to men in the very earth and air here.”

That prose mirrors the 21st-century conclusions of the UCLA scholar Michael Storper, who studied the different economic trajectories of the Bay Area and L.A. In 1970, those two big California regional economies were at parity, with similar education levels and numbers of engineers. Now the Bay Area is 30 percent richer than L.A.

Why? Because the Bay Area’s leading institutions in education, business, and government became highly networked, and planned collaboratively to build Silicon Valley as the economy changed, Storper concluded. But L.A. didn’t do the same—it remained a bunch of separate, siloed communities. L.A. universities and civic groups competed instead of collaborated, and aerospace and corporate headquarters left. Signature institutions like the Los Angeles Times, and even the Dodgers, were sold to out-of-towners, and Hollywood became a welfare case, propped up by state tax breaks and streaming services.

The results: wages for the lowest-paid workers in L.A. have declined by 25 percent since 1979, even as housing costs soared, and L.A. poverty rates have risen since 1990, even when they declined elsewhere. The region does not produce enough skilled and college-educated workers for existing jobs. The county’s 88 different cities, and myriad other local governments, have struggled to serve a larger and poorer Los Angeles; several major agencies—notably the LAPD—performed so poorly and violated so many rights that they were put under court or federal oversight.

Before the pandemic, L.A.’s optimists could dismiss larger concerns about Southern California’s problems by pointing to local budget surpluses, declining crime, rising high school graduation rates, or ambitious plans to fight homelessness. But the coronavirus made the depths of L.A.’s problems undeniable.

COVID-19 followed the path of L.A.’s inequality; it killed at a much higher rate in our most overcrowded, poorest, and predominantly Black and Latino communities. And its economic damage to jobs and businesses followed a similar pattern. Federal relief programs also left out unauthorized immigrants and their families, while school closures and distance learning revealed the depths of L.A.’s digital divide.

The big question now is whether L.A. can change its ways, and connect its people and institutions to build new structures and supports for its people. To that end, the “No Going Back L.A.” report is itself a promising sign—it’s a product of a collaboration of civic leaders called the Committee for Greater L.A. and public policy scholars at both USC and UCLA.

The report is full of ideas for building real foundations that allow people to find stability and health in the short term, while reducing inequality to spread prosperity in the long term. This starts with legal status for undocumented Angelenos, about 70 percent of whom have been here for more than a decade, and includes ideas for a regional housing strategy, more collaboration between civic groups, and making high-speed internet a civil right. The goal is to turn L.A. from a segregated patchwork into an integrated whole.

For such strategies to work, the rest of the state will have to contribute its expertise and funding. The politics of helping out our biggest county won’t be easy in a state where “Beat L.A.” is a common chant in sports stadiums. But right now, California needs to save L.A., if it is going to save itself.