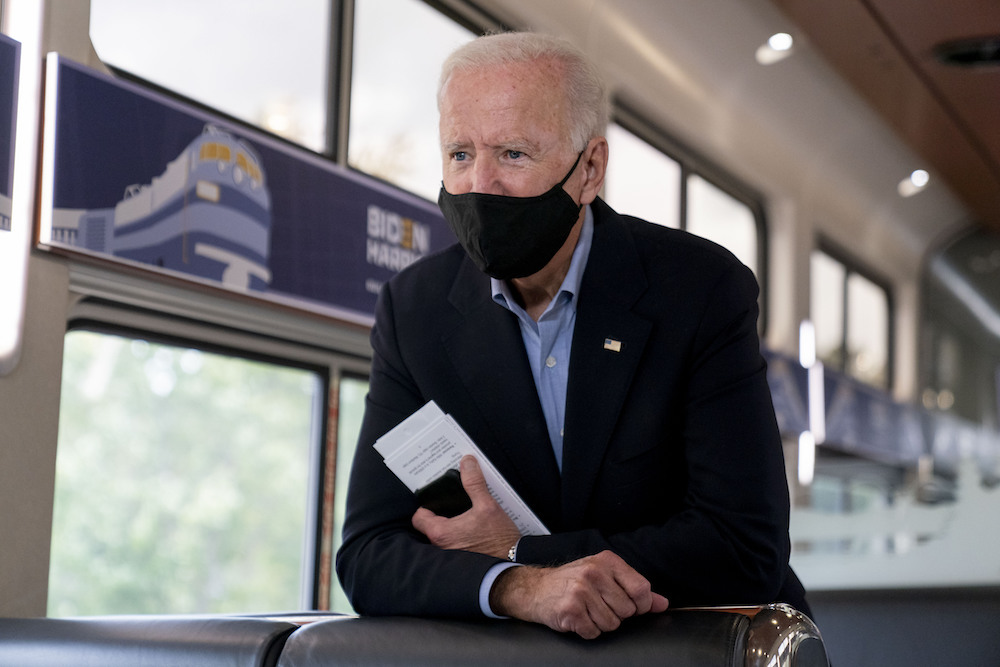 President "Amtrak Joe" Biden speaks aboard an Amtrak train in September 2020 during a train tour through Ohio and Pennsylvania. Courtesy of Andrew Harnik/Associated Press.

I know I should call you Mr. President, but there’s no time for formalities. You must move fast if you’re going to save California’s high-speed rail project.

No malarkey: It has to be you. California has shown itself incapable of funding, managing, or building deep popular support for this $80 billion train, which would be the first truly high-speed rail system in the United States. You—”Amtrak Joe,” with your personal devotion to riding the rail and your multitrillion dollar infrastructure proposal, now before Congress—are the last, best hope for making it a reality.

Is it worth the political risk of associating yourself with an epic failure? You and your advisors are cautious people who don’t want to give Republicans who oppose infrastructure spending a tempting target. Saving high-speed rail would enrage the House Republican leader Kevin McCarthy, whose hostility to progress runs so deep that he has spent years opposing the project even though it would run through his own Bakersfield district.

But should you succeed, the potential rewards extend far beyond California. If you can fix this problematic and high-profile project, you will show the world just how committed you are to remaking this country’s infrastructure, and fulfilling your campaign promise to “build back better.”

Taking on this California headache won’t be easy. To have any chance of success, you’ll have to change the mindset around the project. Most of the attention paid to high-speed rail focuses on its lack of money—it’s short tens of billions of the $80 billion-plus needed for completion. But the fundamental problem with high-speed rail, as with other mega-projects in wealthy California, is not money, but a lack of management.

The California High-Speed Rail Authority is a failed agency. Thirteen years after California voters approved the railway, this agency still hasn’t managed the fundamental task of assembling the land it needs to build the first stretch in the San Joaquin Valley. It lacks the size, engineering expertise, and management chops to handle a construction project of this scale. Contractors have run amok, adding extra charges while failing to meet deadlines. And the authority’s board of directors is weak and part-time.

Leading state politicians, instead of supporting the project, are taking it apart. In early 2019, Gov. Gavin Newsom abruptly and foolishly abandoned the plan to connect the first piece of the project, from the Bay Area to the Central Valley, leaving behind a diminished rail line running from Bakersfield to Merced. By making high-speed rail a Central Valley-only regional project, Newsom hurt support for rail in other regions. Assembly Speaker Anthony Rendon of Los Angeles has started pushing to redirect high-speed rail’s limited funds to Southern California.

No malarkey: It has to be you. California has shown itself incapable of funding, managing, or building deep popular support for this $80 billion train, which would be the first truly high-speed rail system in the United States.

Joe, this unwinding of the project will end in high-speed rail’s eventual demise—unless you intervene, and soon. The good news is that California’s vast mismanagement of the project offers your administration multiple leverage points to jump in and start calling the shots.

Two big leverage points involve money. The first is $929 million in rail funding that the Trump administration pulled back in 2019 after Newsom abandoned the Bay-Area-to-San-Joaquin plan (and made intemperate remarks about the federal government in the process). The second involves $2.6 billion the state received for high-speed rail from the 2009 federal stimulus bill that it still hasn’t spent. California is almost certain to miss a 2022 deadline for using the money, which means you have the power to take it back.

To put it in your earthy style, Joe, since you control $3.5 billion that this project badly needs to stay afloat, you have California by the balls.

You can force Californians to confront the question: Are we serious about completing this train or not?

Your demands should not be bashful. As a condition of California getting the money it needs to keep the project alive—not to mention the tens of billions of additional federal dollars that will eventually be necessary to complete it—you can demand major changes in the management and operations of high-speed rail. First, you should require the resignation of all authority board members—and insist that the governor and legislature appoint a board, and a new chief executive, of your administration’s choice. Second, you need to insist that the new CEO replace the current, ineffective contractors with a real corporate engineering and management heavyweight—I’m thinking Kiewit, or that California giant, Bechtel—that can handle a project of this scale.

And most of all, you must insist that the project plan take the high-speed rail from the Bay Area all the way to L.A. Otherwise, what’s the point?

Some California politicians will balk at such a severe intervention. But don’t give them an inch. When they object, go right after their pretensions of national leadership and say: “Well, if California is no longer interested in building the American future like the governor says, I’d be happy to send California’s money to high-speed rail projects in Texas or Florida, where they still have ambitions.” They should fall in line. After all, you’ll be stepping up to ensure proper management of a project they never bothered to oversee.

One cautionary note: You may be tempted to throw in tens of billions in federal money right now, when the pandemic has opened the door for big federal spending. But slow down. Only once your preferred team is in place should you offer a schedule of future federal payments. And that support must be tied to measurable progress in the construction and testing. Joe, we Californians need to be kept on a short leash.

You’ll have to shrug off criticism, including from Californians who say that the state, having put bond money and cap-and-trade dollars into the project, deserves to hold the reins. The hard truth about California is that we’ve never built much of anything big without federal assistance—our aqueducts, our highways, and our internet all required help from Washington.

But the biggest thing you’ll need is the resolve to walk away. If California won’t meet your demands, or if our leaders undermine the project, you should pull back the money and leave the state to clean up its own unfinished mess.

Your love must be tough, but high-speed rail is worth the trouble. The project also isn’t quite as big a loser as it looks right now. Already, thousands of people are building it in the Central Valley, starting with the replacement of dozens of at-grade crossings that will prevent deadly rail accidents, and free up capacity for freight rail. And high-speed rail, with a proven record of success in other countries, could one day provide a more convenient, climate-friendlier alternative to flying or driving around our state, and country.

But none of that will happen, Joe, unless you kick California in the butt right now.