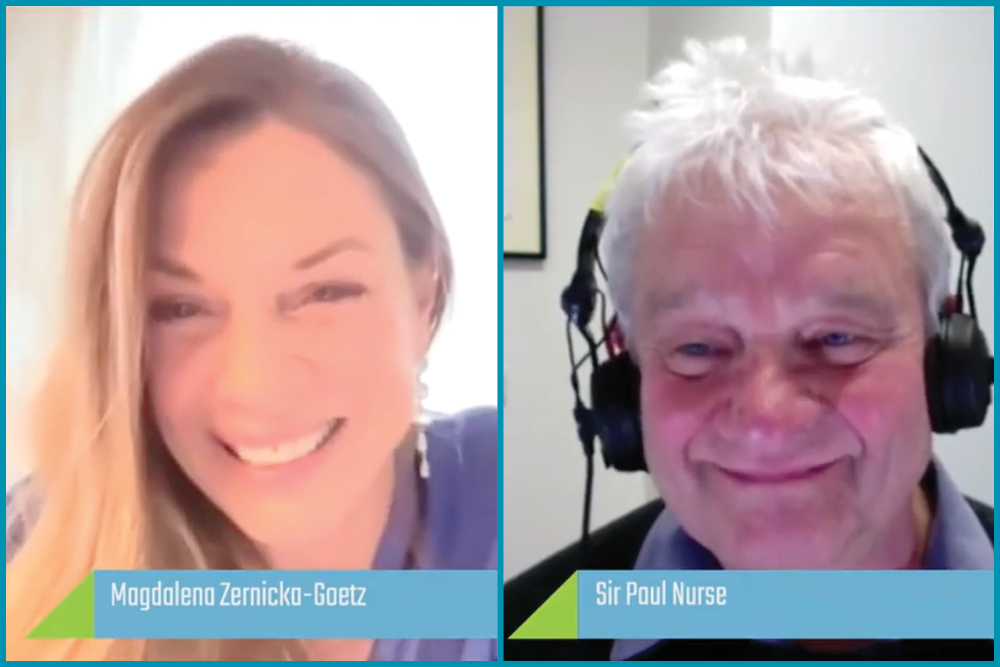 Paul Nurse and Magdalena Zernicka-Goetz discuss "What Is the Meaning of Life?" at Zócalo Public Square.

What does it take to create meaning in our lives? According to Sir Paul Nurse, a Nobel laureate geneticist and author of What Is Life?, supporting family and community as well as improving the world for others are key to fulfillment.

Nurse, currently the founding director and CEO of the Francis Crick Institute, visited Zócalo yesterday with Caltech developmental biologist Magdalena Zernicka-Goetz, author of The Dance of Life, for a conversation that reflected on his scientific and philosophical insights into human life throughout his career as a geneticist. The Zócalo/Caltech event touched on the similarities between artists and scientists, the prospects for curing cancer, and Nurse’s startling discovery of his own genetic history. The scientists also reflected on striking similarities between their professional and personal lives.

Nurse recalled his initial interest in natural history in his youth, when observing butterflies spurred him to question the differences between living and nonliving things. He later recognized that cellular reproduction lay at the core of that question, and that its simplest instances promised to shed light on the mechanisms behind human life. Leland Hartwell, who was studying genetic methods for cell cycle studies to understand cancer, inspired Nurse to learn about yeast development and genetics.

“I wasn’t a geneticist at that time, and I wasn’t working on yeast at that time, but I decided I would learn both of those things,” Nurse said, recalling that the line of research wasn’t highly regarded by other scientists back then. Still, he decided it would be more fulfilling to investigate an important but under-studied area than to focus on a topic already receiving heavy attention.

That choice eventually resulted in a Nobel Prize in 2001, which Nurse shared with Hartwell and biochemist and molecular physiologist Tim Hunt. Their discovery of protein molecules that control cell division in yeast cells shed light on cell reproduction in general, and also had important implications for understanding the growth of cancer cells.

From Nurse’s work, the conversation turned to his personal genetic history as Nurse recalled growing up in a working-class household in Great Britain and being the first in his family to attend college. As an adult, when Nurse requested a complete copy of his birth certificate for a visa to the United States, the document revealed to him that his sister was, in fact, his mother, and his father was unknown. It was a deeply ironic revelation for the geneticist, who described having to reorganize his personal understanding of his entire family tree.

Zernicka-Goetz also asked Nurse about his view that “the best research is both intensely individual and utterly communal.” Researchers are often driven by personal motivations for success and their own interests, but support from one’s broader community is equally essential, Nurse explained. He stressed the importance of finding a balance between respect for individuals’ work, and for the communal support that enables their contributions to scientific research. It was this philosophy that led Nurse to step into a role outside of the lab as director general of the Imperial Cancer Research Fund (now Cancer Research UK), in 1996.

Over the course of the conversation, the scientists constantly returned to the links and similarities between artists and scientists, and the importance of creative thinking to academic research. Creativity, they agreed, drives ideas. By putting certain ideas or concepts that don’t normally go together, “they produce something else that’s different and new,” said Nurse, adding that it’s “the juxtaposition that’s interesting.” Often, Nurse said, scientists can get stuck on the same track. But by embracing creativity, he said, it fosters the ability “to change your mind and think of things in a different way.”

During an audience question-and-answer session, one person over the live YouTube chat circled back to the question driving the event: What is the meaning of life?

“I don’t know what the meaning of life is,” Nurse prefaced, but remarked on the meaning individuals can find in supporting their family, friends, and colleagues. He also offered a broader perspective:

“On a bigger scale, the meaning of life, whilst you’re on the planet, is to try and improve the lot of humankind. That may be through some intellectual discovery, it may be entirely local, it may be by producing some wonderful piece of art, it may be by political leadership in some sense, but it has to be aimed at improving the lot of humanity—whether small or big—in whatever arena you can be most effective.” 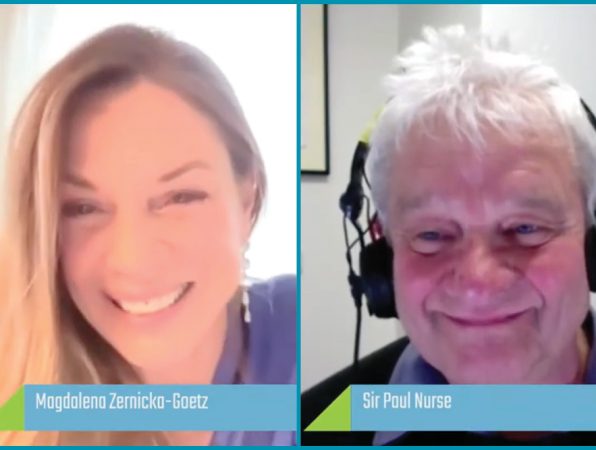