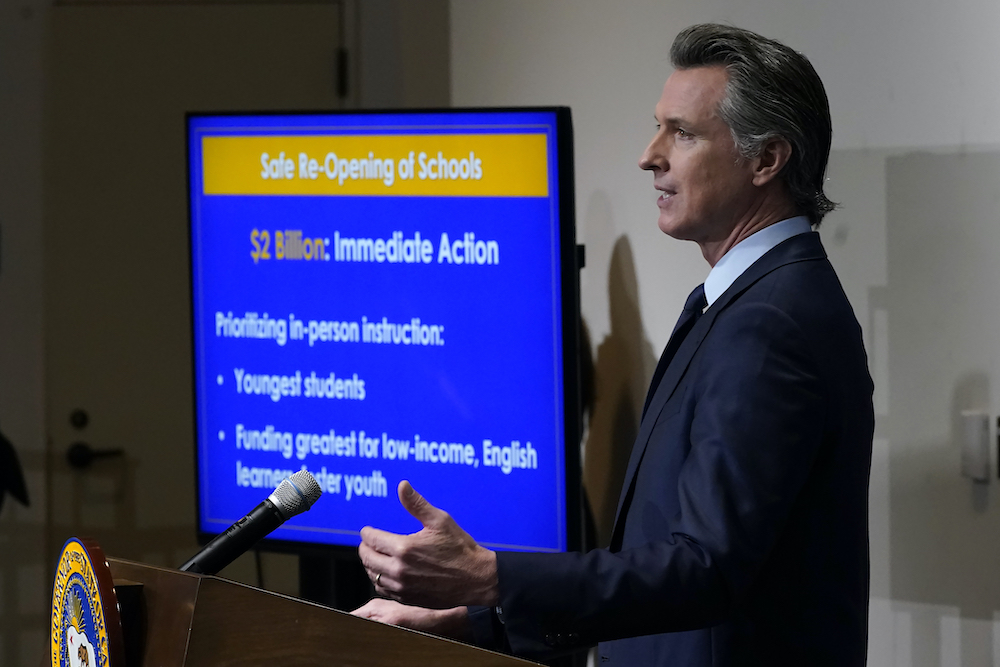 With a projected surplus of $38 billion, California's post-pandemic budget is bigger than most expected. Courtesy of Rich Pedroncelli/Associated Press.

Do you really think that bulking me up with your billions will solve California’s post-pandemic problems?

I, the California budget, am bigger than ever right now—more than $267 billion, according to Governor Newsom’s recent revision of me. And please don’t think I don’t appreciate being more swole than Schwarzenegger—I remember how lean and gaunt I got in the Great Recession. When the pandemic first hit, everyone, including me, thought I’d be much smaller by now.

Instead, I’m projected to have a $38 billion surplus. You might think that this would make me feel all safe and proud, since I’m able to fund a bunch of new programs, from small business incentives to transitional kindergarten, and Medi-Cal coverage for more undocumented Californians.

But actually, I’m worried. And you should be too.

The phony conventional wisdom, oft repeated by politicians and the media, is that if I’m doing well, the state is doing well. Just look at the victory lap around California that Newsom, who is facing a recall, is taking to tout all the new things he put in me. But the reality is that focusing on me, when I appear to be in good shape, is a way to cover up our state’s failures to fix our many broken systems.

Right now, money is being poured into me to fund a number of programs that aren’t being properly managed. Look at the state’s unemployment system, and its failures to prevent fraud and deliver services. Or consider all the money that the latest revision of me spreads among homelessness programs that, as a recent audit found, don’t work well by themselves, or together. Or scrutinize the billions being added to housing funds and programs that produce very little affordable housing.

History says that it is at times when I’m most flush that California makes its dumbest mistakes.

You could also take note of the billions being thrown in to cover pension debt—without any accompanying effort to bring pension and other retirement benefits under control. Or take a gander at the record amounts of money going to schools, which are not yet fully reopened, and which have yet to assess fully all the academic and social-emotional damage done to students by more than a year of closures.

Of course, managing California and its programs is hard. By comparison, I’m easy to handle—I’m just a spending plan. And my numbers are based on predictions about state revenues that are almost always wrong. Why? Because state budget officials make me by guessing how the stock market and the incomes of the wealthy will look in the following year.

Indeed, my dependence on capital gains makes me so volatile that even Kanye probably thinks I’m nuts. And all the formulas that govern me—many of them imposed via ballot initiative by those crazy people known as California voters—make me extremely complicated and even antiquated.

This year, the big reason why the governor is cutting taxes and giving schools extra bucks is because of a little-known 42-year-old, voter-approved formula that limits spending growth, based on population and personal income. That’s right—how California budgets out of the pandemic is being determined not by the needs of today’s Californians but by a ballot measure written in 1979 by an anti-tax activist named Paul Gann, who died in 1989.

Even though I’m governed by the dead, I do include some good new proposals this year, like my new payments to low-income and middle-income Californians, with $500 additional checks to families with children. Harvard economists have shown that such payments worked wonders in California this past year, with poorer counties like Imperial having higher levels of consumer spending during the pandemic than before it. For Fresno and some other parts of the Central Valley, COVID proved to be an economic stimulus.

But beyond such ideas, I wonder if I’m growing too big too fast. Making the new me—the 2021-22 budget—such a giant historic document could bring risks, especially if the stock market and economy turn, and my revenue picture goes upside down again.

While the conventional wisdom is that a big budget is good for the state and the governor, history says that it is at times when I’m most flush that California makes its dumbest mistakes. State voters passed Prop 13 and its tax-cutting formulas when I had a surplus so big it was dubbed “The Obscene Surplus.” The state gave unsustainable boosts to its pensioners when it was running big surpluses in the late 1990s tech bubble.

So, let me suggest making me less bulky. Let’s put aside most of this giant windfall of tax revenues into a reserve, and focus on improving management and developing smarter pandemic recovery plans right now.

Let’s make sure transitional kindergarten works better before enrolling all 4-year-olds in it. Let’s not throw money into pensions and retirements without reforming that system, too.

Then, in the years to come, we can devote this extra money to building up these better systems for the state, so that as I get bigger, I have a longer-lasting impact.