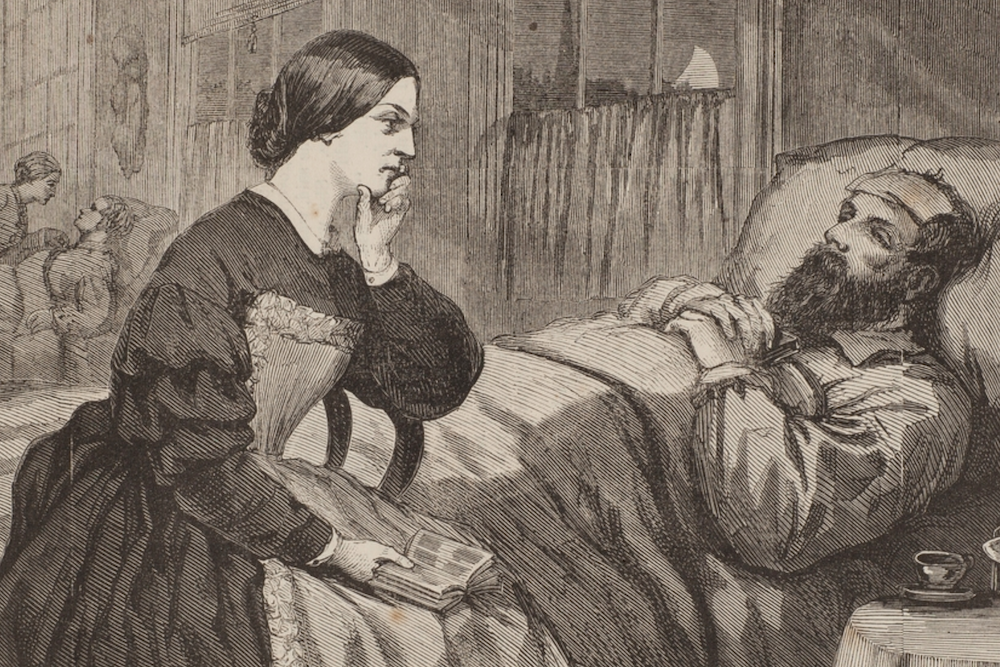 In April, as COVID-19 marched wearily into its second year, my mother became suddenly and unnervingly ill. Barely coherent, she was hospitalized.

Only a couple of days earlier she had been playing with my children, hiking in Northwest Arkansas, dyeing Easter eggs, and—as my mom tends to do—talking non-stop. Now, in the hospital, she sounded like she was in another world. Her normally sharp mind became fanciful and her sentences slipped away into empty pauses.

My mother didn’t have COVID, our initial fear. She had developed sepsis, an extreme and life-threatening physical response to an infection in the blood or other bodily tissue. According to the CDC, each year approximately 1.7 million Americans develop sepsis, and 270,000 die. It accounts for one-third of in-patient deaths.

I am a scholar of religion, sickness, bodies, and medicine, and over the last 15 months I have often been asked to reflect on COVID-19, vaccines, and quarantines. But in early America, the period which I study, the common experience of illness was less like COVID, and more like the run-of-the-mill health crisis my mother experienced: utterly mundane and yet intimately terrifying.

It took the experience of being over a thousand miles away from my mother, unable to do anything but talk to my dad over the phone and hope to catch her briefly awake, to gain a new perspective on how my work relates to the current pandemic. Suddenly, in an immediate and personal way, I saw the parallels between routine illness and epidemic disease. In my mother’s quiet, I became uncomfortably aware of the silencing power of coronavirus, the grievous separations, and the challenges of storytelling.

Early Americans actively responded to sickness and disease through narrative—seeking to find God’s providential power and mercy in their suffering. They worked out these narratives in their day-to-day encounters with illness, and they applied them to experiences of epidemic. As I tried to work out my own story in the midst of the pandemic, I was at a loss. And yet, I am convinced that, as in early America, stories are still necessary. They offer solace, they allow us to see both mistakes and good fortune, they invite us to reorganize and reimagine the disturbed plot of our lives, and they give us a path forward.

Individual, local, and familial accounts of sickness were widespread and important in early America. In my research, I’ve found journals, memoirs, and letters of these sickness stories. They are all shaped by Protestant teachings that pushed followers to understand illness and pain providentially. This was instilled not only in church, but also through stories shared among families and communities.

Early Americans had been trained in such personal accounts by the importance of conversion narratives, which they heard testified in church or read in popular books like John Bunyan’s Pilgrim’s Progress or James Janeway’s A Token for Children. Sickness narratives mapped onto the cadences of conversion narratives, with their emphases on repentance, faith, and salvation. In describing sickness, early Americans were to look back and reflect, to admit their failings and their frailties, and to turn with dependence to God.

Sickness accounts were published and distributed widely, especially when they were written by well-known religious leaders or mission communities. Frances Asbury, the Methodist itinerant minister often wrote of sickness in his journals, which were published in the Arminian Magazine beginning in 1789. In the German Pietist Lutheran community of Ebenezer, Georgia, the minister Johann Martin Boltzius wrote in detail about sickness in his family and the wider community from 1735 to 1753. His journals were published in Halle and Augsburg for a wide audience of coreligionists and financial supporters.

Early Americans actively responded to sickness and disease through narrative—seeking to find God’s providential power and mercy in their suffering. They worked out these narratives in their day-to-day encounters with illness, and they applied them to experiences of epidemic.

While the practice of narrating sickness gave sufferers and their witnesses, most basically, something to do, the providential tones—which often followed well-worn patterns—also provided an answer to the disorientation of sickness. They insisted that there was an as yet unknowable, overarching plot that their suffering was part of and that it would, someday, make sense. Such narratives consoled early Americans deeply, and became opportunities to express a trust and hope that the suffering might yet mean something, despite the limitations of human perspective. This helped sufferers and their witnesses to the other side of strife and grief.

These patterns also connected early Americans to generations of Christians before them and to biblical figures like Job, who found in his suffering a great faith and meaning—through the support of community and witnesses. In his darkest hour, Job’s friend Elihu reminds him that, though mortals might be “chastened with pain upon their beds,” God also can “bring back their souls from the Pit, so that they may see the light of life” (Job 33).

The importance of narrating sickness for early Americans becomes most apparent in the accounts where an individual was silenced by their suffering. When narratives broke down due to pain, others filled in the blanks. Sickness stories needed endings. There are many examples of this. In 1784, Mary Maccarty, a woman in Worcester, Massachusetts, could leave no final words with her family, as her speech was impaired by intense pain. Her husband, Thaddeus, a Congregationalist minister, wrote a memoir of her life for their daughters. While he grieved that he could not reflect on her final words, he wove a beautiful story of her last visit to church and ended with trust in her final triumph over suffering: her reunion with previously deceased family members and her divine savior.

Sickness stories also offered space for those in need of private reflection. When Justus Forward’s father died in 1766, he had been suffering intense delirium. In a journal account of his father’s final days, Forward—also a New England Congregationalist—struggled to reckon with his father’s sickbed shouts of fire, robbers, and murderers. And yet, Forward went back, to previous months, to give an account of his father’s spiritual hope.

Forward does not mention a specific audience for his account; it is likely that he, like many Protestants who journaled at this time, wrote their journals with their own future spiritual reflection in mind. Entries were often re-read and revisited to allow for new reflection. Forward’s description of his father’s death shows marks of such revisiting. Where he wrote that his father “left us exceeding good ground to think he was prepared for Death & that it will be well with him,” Forward at some point crossed out the future tense “will be” and replaced it with the more certain “is.”

These sickness accounts of ordinary suffering and loss also shaped and conditioned early Americans’ responses to epidemics. In those cases, too, disease and its alleviation were often attributed to God’s providential judgment and mercy.

While readers today might find such epidemic tales of a powerful God disturbing and irrational, they become more comprehensible when we recognize how widespread this framing was in the individual and mundane accounts of suffering shared throughout early American Protestant communities.

Like early Americans, our understanding and response to epidemics is still shaped by our experiences of sickness in our private lives. With my mom’s sickness—in the intimate encounter with her vulnerability—the full weight of this long pandemic year finally hit me.

As in sepsis, severely ill COVID-19 patients are silenced—not by delirium, but through intubation and strict restrictions against visitors. While those who can, may avail themselves of FaceTime or Zoom or messaging, these have limitations. You cannot hear the timbre of a loved one’s voice through Zoom. You cannot touch their pallid forehead or brush hair from their eyes over the phone. You cannot feel the tension in their hands.

Unlike early Americans, few of us today understand sickness and epidemics in providential terms. We may hear phrases like “everything happens for a reason” or “God has a plan,” but such consolations are not widely shared and too often lack the work of individual reflection and repentance that accompanied early Americans’ providential commitment.

I am reluctant to offer a universal story for COVID, but if I did, it would likely call on that tradition of reflection and the intimate experience of silencing sickness. Where did we do wrong? How did we fail the vulnerable? How can we commit to doing better in the future? How can we best serve and love our fellow humans? This process is not necessarily to assign blame. Perhaps the best part of providential narratives is that they insist on the limitations of human perspective. The narrative form is designed to push tellers to lament—to grieve—but also to imagine a new and better path.

Such stories take time. In my week of uncertainty this spring, all I felt was an all-encompassing silence and nauseous anxiety. I thought, briefly, that I should write or journal, but the words didn’t come. My father, a retired physician, wrote lengthy emails, explaining each test, diagnosis, procedure, medication. But I was mired in silence. And this gave me a new appreciation of just how hard it is to tell sickness stories. How hard it is to find meaning in suffering. While early Americans may have had more refined tools, more shared narratives to work with as they struggled through sickness, I started to wonder if their words came any more easily.

What story will we tell of COVID-19? While scientific and medical narratives are becoming clearer, the costs of all our loss, all our silences, remain unaccounted.

My mom is recovering now. We have long talks again and are making plans. In ways, it all seems like a nightmare, but then I scroll through my camera roll, and for a week in mid-April there are only the photos of lilac and dogwood blooms that I texted her every day, when all my words failed.