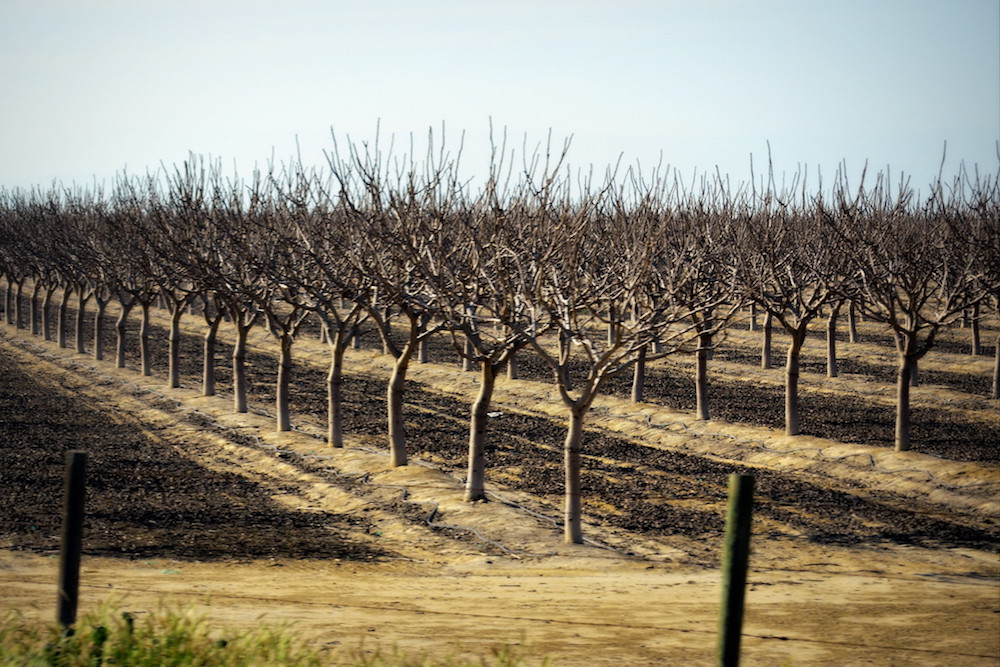 Managed retreat needs to be on the table for the San Joaquin Valley. Courtesy of Gwendolyn Stansbury/flickr CC BY-NC-ND 2.0.

Twenty-five years ago, at age 18, I followed my uncle to the top of Mount Lassen for a 10,000-foot view of Northern California’s Fourth of July fireworks. We watched the revelry start over Reno and Lake Tahoe, and move seemingly to our feet at Lake Almanor. Then the North Valley’s sky popped like a brick of firecrackers.

The thrills continued when my uncle tried to ski down the southern face of this active volcano. Back then, Lassen Peak was mostly covered in snow through midsummer, so a diehard skiing down its face in July was hardly notable. But doing so by moonlight was—and remains—half-baked, pun emphatically intended.

Nowadays, the peak’s snowpack succumbs to the summer sun much sooner, and thus is more suitable for an e-bike daredevil with a death wish. The Lassen Ski Area resort, where my professional ski bum uncle originally took up the sport, had closed in 1993, in part because of poor snowfall.

In retrospect, the fate of Lassen Ski Area was a preview of California’s, and the world’s, impending environmental and economic reckoning. Some adaptations will be successful and even beneficial, such as the Lake Tahoe region’s ski resorts pivoting to summer recreation. Other adaptations will leave scars and trauma. Ultimately, many climate change adaptations come down to math and tradeoffs. In that framework, we need to think harder—across the state—about the snow and water we have left.

Water is life, the saying goes, but snow is prosperity. California’s annual agricultural output is approximately $50 billion, or just 2 percent of the state’s GDP. Yet the state’s agricultural industry uses 80 percent of its annual water supply. Our agricultural brethren have fed a lot of people with crops grown with that water. But this whole venture presumes water supply stability courtesy of the Cascade-Sierra snowpack.

But for how much longer? Our warmer and drier climate is reducing the snowpack’s historically ample “excess” water that trickles down to streams, lakes, and rivers each summer. Record low reservoir levels threaten to idle hydro-electric dams like Lake Oroville, and may contribute to rolling blackouts this summer. State and federal water managers have significantly cut water allocations to agriculture. We’ve just emerged from the severe drought of 2011 to 2017 into a new one with inequitable human, environmental, and economic costs we won’t know for years.

Statewide policy and political actors are clinging to solutions aimed at fortifying the status quo, primarily the continued Frankensteining of the desert on the south and west sides of the Central Valley into an agricultural behemoth. The status quo also includes the perpetual expansion of the insatiably thirsty Southern California mega-region and big water conveyance infrastructure projects like Gov. Gavin Newsom’s Delta tunnel.

There are some new ideas. Researchers from UC Merced and UC Santa Cruz are more imaginative in a study suggesting that all 4,000 miles of canals be covered with solar panels—reducing evaporation and producing clean energy! But so far absent from the water discourse is a policy considered best practice for confronting another climate change villain, sea-level rise.

On the coast, managed retreat means abandoning housing and development to the sea. But more broadly, managed retreat is a risk management approach for evaluating land use of environmentally sensitive or at-risk property and infrastructure. It’s the simple and prudent acknowledgement that we can’t rebuild and replace everything mother nature reclaims, but we can repurpose the land for other, positive uses.

In retrospect, the fate of Lassen Ski Area was a preview of California’s, and the world’s, impending environmental and economic reckoning.

Managed retreat isn’t popular with everyone, especially those with vulnerable beachside property. But once storm surge after storm surge makes you uninsurable and FEMA declines reimbursement for rebuilding in the new high-tide zone, you’re taking the full loss. A managed retreat approach actively and collaboratively migrates communities out of harm’s way before catastrophe strikes. It’s easier to move on a sunny day than in waist-high tides. Living examples of successful managed retreat are the cities of Pacifica and Marina, in San Mateo and Monterey Counties, respectively.

Managed retreat also needs to be on the table for the San Joaquin Valley, where the water situation ceased being sustainable some time ago. A number of local communities lack safe drinking water, and pumped-in groundwater is causing the land itself to sink, in some places up to 28 feet.

Managed retreat would make more sense than anything we’re doing now. We must start encouraging and incentivizing people and farms in drought-stricken regions dependent on water transfers to migrate somewhere more hospitable to agriculture and other forms of human development.

Here’s the key question our leaders are running away from: How much more profit-driven stress can the state’s water supply be subjected to before the ecologies of whole regions—the California Delta, the Sacramento Valley—collapse? There’s only one right answer to that question: We don’t want to find out.

If we stop diverting so much water to agriculture, especially in the hot and drier southern parts of the San Joaquin Valley, then the Sacramento Valley and the Delta stand a better chance of enduring through climate change. This doesn’t mean the end of agriculture. Rather, the goal is to preemptively and collaboratively adapt this thirsty industry by downsizing it to match a diminished water supply.

Migrating agriculture north to the Sacramento Valley can’t be a one-to-one trade where every venture survives. The Sacramento Valley is approximately one-half the size of the San Joaquin Valley, and at most, 15 to 20 percent of the land could host relocated agriculture. The majority of San Joaquin agricultural businesses won’t survive in their current form—but some could find new life by converting their fallowed fields into solar farms to help the state achieve its goal of fossil fuel-free electricity by 2045. Or we can allow the San Joaquin Valley to revert to the desert it was before our forefathers planted a garden in it.

Our leading export crops, almonds and pistachios, are the most obvious candidates for downsizing, along with cattle ranching and the thirsty alfalfa grown for cattle feed. To ensure new water-hogging almond orchards aren’t planted in the North Valley, the state can incentivize a transition to low water usage crops.

None of this is easy—it requires our elected leaders to find new wisdom, wean themselves from big agriculture campaign donations and influence, and make holistic and geographic decisions for the state’s long-term health. But things will get even harder if we wait until nature gives us no more choices.

We don’t want California to end up like Lassen Ski Area, defunct because it no longer had the snow upon which it relied.

Which brings me back to my uncle’s harebrained moonlit ski. He lost his balance after 20 feet and slid down the peak on his side and back. He volcano body-surfed, and walked away with nothing but a minor scratch on his forearm.

I still can feel the beating summit wind, and I recall thinking that, viewed from above, fireworks resembled jellyfish. Today, I think about how that vista may not last forever. The state is so dry and fire-prone, that we don’t have long before Fourth of July fireworks, like that Lassen snow, are things of the past.