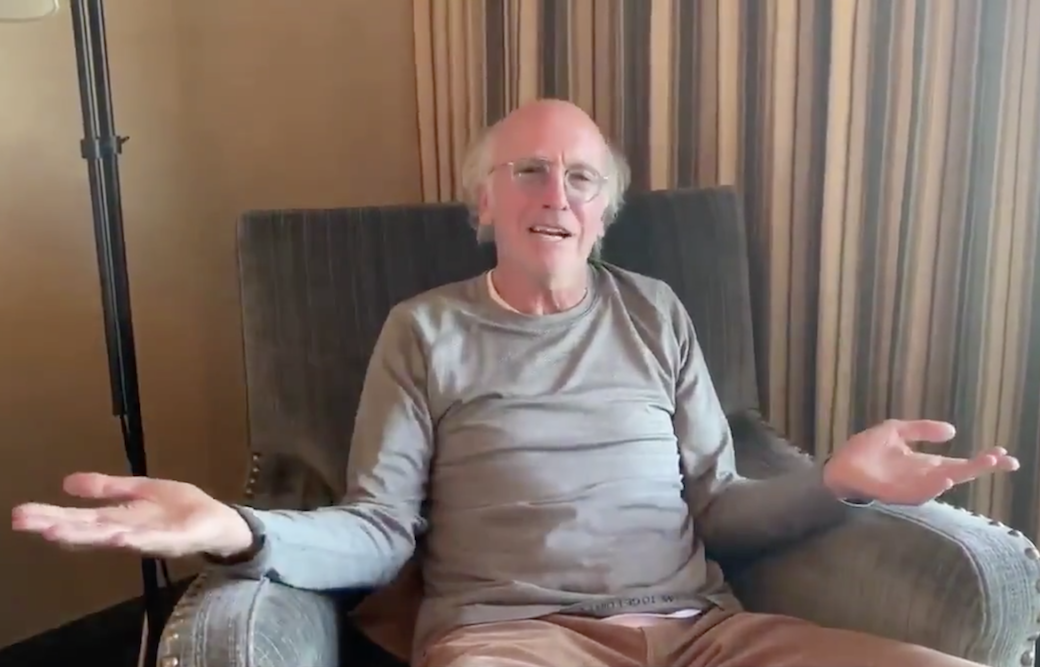 Larry David, the patron saint of awkwardness, gives a COVID PSA. Screenshot from David's PSA shared by the Office of the Governor of California's Twitter account.

Ever since vaccines became available, people have been joking that the return to normal life would be awkward. After more than a year of relative isolation, so the half-earnest predictions went, we would surely find our social muscles atrophied. Even small talk or maintaining eye contact would feel like monumental achievements as we traded in our sweatpants and tentatively crawled out of our shelter-in-place hideaways.

Since becoming fully vaccinated, I have found the opposite to be true. Instead of paralyzing me with awkwardness, returning to normal social life has been a profound relief—not only in terms of relieving my boredom and isolation, but by finally giving me the clear social norms that I have been lacking for the past year. While it is admittedly the least of our worries, this pandemic year has been one of the most awkward periods of my lifetime. And that awkwardness, however uncomfortable, has a lot to tell us about the state of society’s social fabric.

We tend to view awkwardness as something that afflicts individuals. Either they behave awkwardly in a certain situation, or—in extreme cases—they seem to be inherently awkward people. In reality, though, awkwardness is a deeply social phenomenon that arises when our social norms or expectations break down. We can see this in the way that the feeling of awkwardness spreads. If we notice an awkward situation, we begin to feel awkward, too—even without being directly involved.

In its simplest form, awkwardness occurs when someone acts in a way that is inappropriate for a particular context. Jokey familiarity at a formal event can be awkward, for example, just as over-formality can be awkward in a more casual setting. When that kind of violation occurs, we often don’t know how to respond; the (mostly tacit) rules governing social situations do not provide guidance for totally unexpected human behavior.

This feeling of uncertainty gives rise to discomfort and anxiety, leading us to scapegoat the person whose faux pas has made us feel so awkward. But only seldom is the awkward person simply screwing up. Usually they are acting according to different norms or expectations based on a different view of the situation. Someone who shows up to a house party in a tuxedo is probably not doing so to make others uncomfortable—they were expecting a different kind of event, with different social norms.

These social norms help us make sense of our world, they clarify our place in it, and they guide our actions. Aristotle famously declared that man is a political animal, meaning that we are hardwired to create rules and institutions to govern our lives together. Some contemporary evolutionary theorists have come to similar conclusions. Our more sophisticated brains are largely devoted to learning how to navigate our social environment. In place of in-born instinctual patterns of behavior, humans have society. In one sense, this is a good thing for the human species as a whole: Social evolution is much quicker and more reliable than biological evolution, allowing us to adapt to a huge number of environments. But it’s not necessarily useful for each individual. Once learned, social norms are often harder for us to disobey than biological demands. Perhaps most dramatically, the average adult human being will hold their urine to the point of poisoning themselves rather than wet their pants.

Being deprived of the comfortable framework of social norms, especially suddenly or unexpectedly, is a painful experience—and that is exactly what happened to all of us last March. But unlike an everyday flare-up of awkwardness, which can normally be resolved fairly quickly, pandemic awkwardness lasted 15 months and counting, as we have had to navigate a continual churn of unfamiliar and constantly changing social expectations.

I remember vividly how the most mundane of actions suddenly became minefields of awkwardness. Going to the grocery store became a minor nightmare every week. We were told to keep six feet away from others, but nothing in the layout or capacity of the store was changed to make that possible. Trying in good faith to maintain our social distance, we wound up hovering around our fellow shoppers—until everyone agreed, tacitly but seemingly spontaneously, that quickly darting in to grab something from the shelf was acceptable. No sooner was that settled that we then learned, quite suddenly, that we should all be wearing masks—which became the most common and confusing source of awkwardness.

Overall, what the awkwardness of pandemic lifestyle has shown us is that American society isn’t awkward enough.

Early in the pandemic, the CDC and other health authorities recommended against masking for the general public, only to reverse course shortly thereafter. President Trump resisted and then undercut these guidelines with his refusal to wear one—resistance which was adopted by his followers.

The expectation of indoor masking became the closest to an unambiguous, universal social norm we had in many parts of the country; yet instead of relieving awkwardness, the masking norm often exacerbated it. The problem was one of enforcement, which largely relied on persuasion and social pressure, putting retail and restaurant employees in exceedingly awkward positions. For the masked, the closest thing to a solution—other than shouting matches or threats to call security—was simply to avoid unmasked people whenever possible.

On one level, the fact that masking became such a highly charged issue—even a sign of personal morality—reflects the extreme political polarization of American society. But it also reflects how desperate we were for some kind of stable norm, some way to know for sure that we were doing the right thing. Conservatives talked themselves into believing that refusing to mask was an important moral issue. Meanwhile, liberals reacted to the CDC guidance allowing the vaccinated to go unmasked almost with regret.

Awkwardness is always a sign that something has gone wrong, but we should not let our haste to relieve our discomfort and anxiety lead us to misdiagnose the problem. That guest who shows up to your house party in a tuxedo may not be an idiot who needs to go home and change. The problem may be that your invitation was unclear. In the same way, the social awkwardness that we experienced under COVID, and our clumsy responses to it, reflect more than the inevitable effects of an unexpected catastrophe. Rather, they show us that our norms were already inadequate to help us navigate serious social problems.

Part of the issue is that many American social norms are, paradoxically, anti-social. There is a strong norm against anything but the most superficial conversation among strangers: At no point in the pandemic did my fellow shoppers and I think to talk through how to coordinate our dance amid the aisles. The emergence of masking as a, quite literal, “virtue signal” also fits this pattern—allowing the masked to simply stay away from the unmasked, and vice versa. We successfully avoided awkwardness, but also missed any opportunity for collaboration or persuasion.

The supposed land of the free is also a deeply hierarchical society. The anti-maskers who got into fights with waiters and retail clerks were reacting not just to being told what to do, but to being told what to do by someone they believed should be serving them. For their part, liberals present themselves as some combination of educator and preacher, proclaiming the truth from on high. Few of us have developed the habits and skills required for meaningful discussion on truly important issues. Such conversations tend to devolve into either a monologue or a shouting match—outcomes that minimize awkwardness by either giving one person full control over the situation or allowing everyone to walk away from the encounter altogether.

Overall, what the awkwardness of pandemic lifestyle has shown us is that American society isn’t awkward enough. In our haste to avoid awkwardness, we have cut ourselves off from each other. We treat our fellow citizens as servants, as students, or simply as obstacles—choosing the comfort of clear hierarchical norms over the awkwardness of open-ended and unpredictable encounters with our equals. What is most important in life—and what we desperately need more of as a society—happens in those awkward in-between spaces that the rules did not anticipate.

The real danger is not that we will forget how to behave in “normal” society, but that we will use our discomfort with awkwardness as an excuse to return unthinkingly to our anti-social social norms. To rebuild our life together in a truly human way, we need to get past snap judgments and risk the painfully awkward dialogue that is the unavoidable prelude to real change.