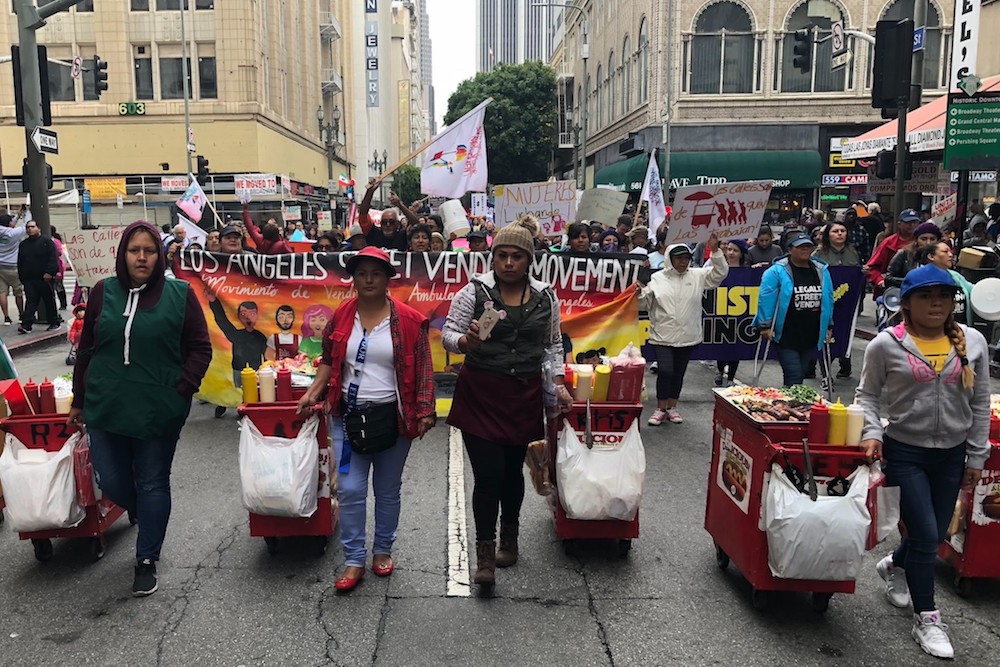 It's time for Los Angeles to develop innovative legislation to support its street vendors, who have fought intimidation and criminalization for decades. Photo by Doug Smith.

Street vending can no longer be dismissed by policymakers and privileged residents as an underground economy, or an aberration, or a burden to the nation’s second-largest city. Street vending is, economically and geographically, at the heart of the Los Angeles experience and economy. But the state, county, and city have yet to figure out how to govern this fact of L.A. life, to the detriment of the 50,000 micro-entrepreneurs involved in street vending.

Some of them sell merchandise, such as clothing and cell phone accessories. Others—an estimated 10,000—sell food, like fresh fruit, bacon-wrapped hot dogs, tamales, and ice cream. These sellers are deeply interconnected and interdependent with the city’s formal economy: They purchase supplies from other businesses and spend their income elsewhere, providing tax revenues for local, state, and federal government. Street vending, and its related small purchases, sustain 5,234 jobs in Los Angeles, according to that Economic Roundtable report.

These impacts have been 150 years in the making. In Taco USA: How Mexican Food Conquered America, journalist Gustavo Arellano, citing a 19th-century Los Angeles Herald article, traced tamaleros selling tamales from wagons as far back as the 1870s. And in Los Angeles Street Food: A History From Tamaleros to Taco Trucks, food writer Farley Elliott documented the city’s initial attempts to regulate street vending, which not only included Mexicans, but also Chinese vendors: “By the 1890s, there were city government-sanctioned attempts to either severely limit or curb these tamaleros altogether, by restricting either their movement or their window for being able to sell,” he writes. These initial enforcement efforts failed due to the popularity of street food, a pattern that continues today.

By the 1980s, LAPD officers were ticketing and conducting regular sweeps of day laborers and street vendors to deny both groups access to public sidewalks and street corners. Immigrants’ rights advocates worked with street vendor leaders to push back against this harassment—and to try to legalize street vending.

Their organizing efforts led to a city ordinance in 1994 that instituted a two-year pilot program with street vending districts in eight designated areas throughout the city. Only one district was ever created—in the MacArthur Park neighborhood—and in many ways, the geographic limits proved to be a failure. Street vending is a competitive business, and vendors outside of the designated areas undercut those in the program who had higher overhead. Street vending remained illegal, and the L.A. City Council failed to take up this issue again for another 25 years. This inaction resulted in the further criminalization of street vendors, who faced a constant—but unevenly enforced—threat of fines, tickets, and confiscation of their equipment and goods.

In 2008, LAPD enforced a major crackdown on Boyle Heights street vendors, leading a group of community leaders connected with East LA Community Corporation (ELACC) to organize resistance. They brought together a coalition of community, legal, immigrants’ rights, and food justice organizations to fight back against the draconian and anti-immigrant attacks.

Street vending can no longer be dismissed by policymakers and privileged residents as an underground economy, or an aberration, or a burden to the nation’s second-largest city. Street vending is, economically and geographically, at the heart of the Los Angeles experience and economy.

In 2010, this coalition held its first vendor community forum, followed by town hall meetings with thousands of vendors throughout Los Angeles. Two years later, street vendors worked with this group and others to launch the Los Angeles Street Vendors Campaign (LASVC) to pursue the legalization of their business. In 2018—after nearly a decade of organizing, popular education, participatory policymaking, advocacy, protests, and major mobilization—they secured major policy victories.

The biggest of those: state legislation decriminalizing and legalizing street vending throughout California. This law also eliminated previous charges and convictions for street vending, and provided immediate protection to tens of thousands of immigrant entrepreneurs and workers in the informal economy.

At the same time, the legislation provided a foundation for local reform. California cities were forced to remove their criminal bans, and most established first-ever permitting programs for legal street vending, including Los Angeles. In November 2018, L.A. City Council formally rescinded the criminal ban on street vending and adopted a set of rules and regulations for legal vending on sidewalks and in parks, requiring vendors to obtain a city permit in 2020.

These groundbreaking policy wins are only the beginning. The LASVC is now working to reform state and county retail food regulations that keep many food vendors mired in the informal economy.

Prior to applying for a permit from the city of Los Angeles, a food vendor must first secure a “county health permit” from the L.A. County Department of Public Health (DPH). The Community Economic Development Clinic at the UCLA School of Law recently analyzed this permitting process and found it to be riddled with barriers.

The combined costs for permits, inspection fees, commissary leases, and code-compliant equipment can total tens of thousands of dollars. There are no standardized cart design blueprints or operating procedures that vendors can utilize to procure a code-compliant cart from a manufacturer. Commissaries—facilities used for food preparation and equipment cleaning and storage—are scarce, and DPH does not permit the use of underutilized kitchens in restaurants, schools, and places of worship.

The largest barriers, however, stem from equipment design standards developed with food trucks, not smaller scale carts, in mind. In one example, following state and DPH requirements would yield a 700-pound taco cart larger than most sidewalks; another example would require a hot dog vendor to have refrigerated space to store 6,000 hot dogs. The state requires most carts to include a three-compartment sink, adding considerable weight, size, and cost. While the state offers some flexibility—allowing use of auxiliary sink units in lieu of integrating sinks on the primary unit—DPH has not yet embraced this option for low-income street vendors in Los Angeles.

The state retail food code also creates barriers, including prohibiting the slicing of whole fruits at a vending cart and keeping most pre-cooked meats hot-to-order. This has led to a de facto ban on the legalization of two iconic L.A. cart vendors: fresh fruit and tacos.

Rather than eliminating the police crackdowns of previous decades, in some ways the new rules have given law enforcement another means of intimidation and criminalization. Police officers, code enforcement, or health officers from the county and city (often armed) enforce these impossible rules, resulting in expensive tickets, fines, and property confiscation. This hurts vendors, excluding them from the formal economy, and consumers—who want to safely enjoy L.A.’s renowned street food.

This ongoing battle illustrates the paradoxical dimensions of local governance. Our laws and regulations exclude many of the same people who make public spaces safe, lively, and inclusive. Government leaders say they want permanent businesses and temporary ones, but make existence difficult for both.

These paradoxes can be resolved, and the state and county can develop legislation that balances economic opportunity and public health. Los Angeles, too, needs innovative strategies to support vendors—including improving working conditions and providing entrepreneurial opportunities—to fully integrate them into life and business here. Ultimately, recognizing the significance of the informal vending economy will create better, healthier lives for the tens of thousands of low-income individuals (most of whom are immigrants with roots in Mexico, Central and South America) and families who work on the streets of L.A. And the entire region will reap—and eat—the benefits.