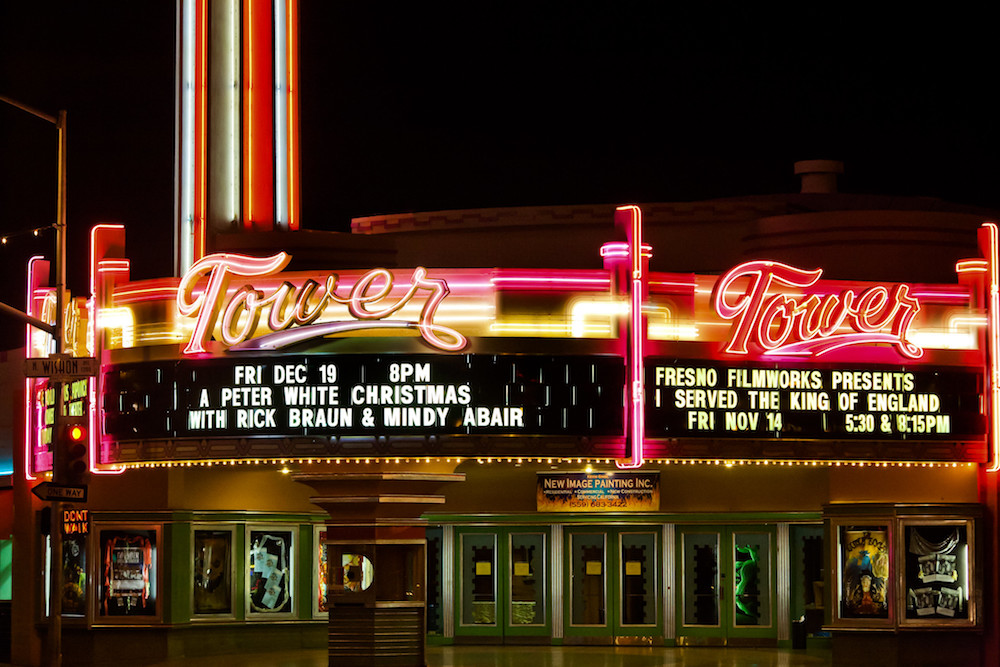 Controversy has sparked over the potential sale of Tower Theater, a historic theater in Fresno, to Adventure Church. Courtesy of Thomas Hawk/flickr CC BY-NC 2.0.

Have a little faith, Californians.

Even if you can’t stand the religion or politics of your local churches, you might find their congregations to be valuable saviors—of your historic and endangered movie theaters.

In other words, please think twice before engaging in a holy war like the one in Fresno over the historic Tower Theater.

The Tower, first opened in 1939, is an arrow-shaped, Streamline Moderne gem anchoring a neighborhood of retail, restaurants, and arts known as the Tower District. But, like so many of California’s signature theaters, it has struggled, especially in the pandemic. So, the theater’s owner is trying to sell. The owner’s preferred buyer is an evangelical church that has opposed same-sex marriage and LGBTQ ministers.

As a practical matter, church takeovers of old theaters make sense. Movies and live shows are often not enough to support the expensive upkeep of these dilapidated palaces. Churches with growing congregations can regularly fill the seats while raising money for maintenance and improvements—and keeping the space available to the community for events and screenings.

But these are polarized, not practical, times. And many growing churches are non-traditional, evangelical, or politically conservative, and thus don’t fit the more secular and progressive entertainment districts where you find old theaters.

In some places, churches and their neighbors look past their differences and focus on their shared interest in the old buildings. Responsible churches agree to preserve and maintain theaters they take over, in exchange for neighborhoods accommodating the traffic or parking headaches of hosting a congregation. Fresno has seen something like that happen when churches took over other theaters.

But at the Tower Theater, conflicts between the church, the theater owner, and the community have escalated, turning a neighborhood problem into statewide controversy.

To summarize: during the pandemic, the Tower Theater owner allowed Adventure Church, a largely Latino congregation located elsewhere in the Tower District, to hold services there (a questionable decision given COVID-19’s perils). Adventure liked it so much that, when Tower’s owner put the property up for sale late last year, the church agreed to purchase it—and keep it open for shows and non-profit events.

If the neighborhood can find a savior for the theater less morally problematic than Adventure, that would be wonderful. But there are reasons to doubt whether a relatively poor city government like Fresno’s, or a restaurant, can successfully operate an old and costly theater.

But when word of the purchase agreement leaked, many people in the Tower District understandably saw the transfer of the iconic theater to the church not just as a threat to the theater but as an attack on the spirit of the artsy, inclusive neighborhood. A petition opposing the sale circulated widely, and weekly Sunday protests grew. Local businesses also questioned whether zoning permitted having a church there, and thus whether Adventure’s presence might create zoning or licensing problems for bars and cannabis businesses.

The anti-church protests soon drew counter-protestors from right-wing groups, and police erected barriers to keep them separate. Either the church or the theater owner—it’s not clear whom—raised the political temperature by displaying a tribute to the late right-wing talk show host Rush Limbaugh, infamous for his homophobic rhetoric, on the theater marquee. California media, obsessed with culture wars, fueled the controversy with their coverage.

The conflict grew from there. The Tower property includes restaurants; one of them sued to block the sale, saying its own agreement entitled it to purchase the property. Fresno’s mayor, seeking to defuse the situation, offered the church an alternative property, which Adventure turned down. Other city officials floated the idea of taking the theater by eminent domain. There is also considerable talk of other people or institutions who might want to buy the place.

If the neighborhood can find a savior for the theater less problematic than Adventure, that would be wonderful. But there are reasons to doubt whether a relatively poor city government like Fresno’s, or a restaurant, can successfully operate an old and costly theater. If that’s the case, then Adventure or another church might end up being the best option, and it could be smart for the community to hold its nose and negotiate.

Yes, I can hear the howls at the idea of any compromising with an anti-gay church. But a keep-your-enemies-close approach makes more sense. Adventure is already in the Tower District, whether it occupies the theater or not. And if you’re going to have to put up with such a church, why not try to benefit from its presence, by getting it to fix up and preserve the Tower? And if you want the church to stop spreading hate, what better way than to engage with the church, with the goal of changing the hearts and minds of the congregation?

I’ve witnessed this more conciliatory approach bear fruit in two California places. One is Redding, where the huge Bethel Church, and its School of Supernatural Ministry, have long been controversial. Bethel has supported gay conversion therapy and attempts to perform miracles such as using prayer to resurrect a dead toddler. Yet when Redding’s civic auditorium was in trouble, Bethel Church and its members, even in the face of considerable criticism and fear of the church in the community, helped form a non-profit, Advance Redding, to save and manage the auditorium. The deal has been a civic success, with the auditorium hosting a variety of shows and the ministry school making rent payments to support the facility.

The other theater is literally around the corner from my San Gabriel Valley home. The historic Rialto, which famously played itself in movies (as the murder scene in Robert Altman’s The Player, and as the date spot where Ryan Gosling and Emma Stone watch old movies in La La Land) sat vacant and decaying for nearly a decade until Mosaic Church, a growing mega-church with congregations from Hollywood to Mexico City, moved in.

There was some community resistance to the church’s arrival, and concern for what the theater might become. Mosaic is not my cup of tea—I attended services, and while I liked the diverse and young congregation, your cynical columnist cringed at the pop-style music and the over-the-top positivity of the message.

But, three years later, Mosaic is undeniably a neighborhood asset. The church has carefully helped repair the theater, and taken care to keep the place open and welcoming to the community.

Before the pandemic, Mosaic was even screening movies on the Rialto’s giant screen. One of the last films we saw before COVID-19 hit was a Mosaic-sponsored showing of Miracle on 34th Street, the classic Christmas film about having faith in people whose beliefs we do not share.