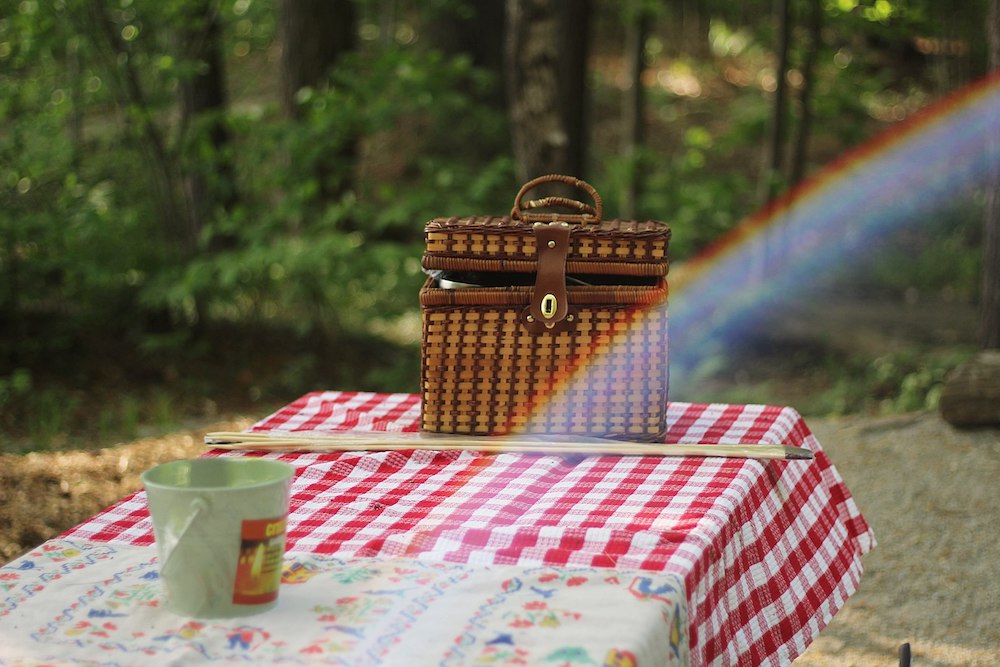 Wedding dresses and bridal veils. Graduation caps and gowns. The Stars and Stripes and the rainbow Pride flag. Rally towels and baseball caps. The flags and fashions of the Olympic opening ceremonies. Checked picnic blankets and striped beach towels. The red, green, and black of Juneteenth celebrations.

Summer wouldn’t be summer without textiles.

Blessed with an abundance of cloth, we tend to take textiles for granted, all the more so when we aren’t bundled up against the cold. But textiles are among the oldest, most essential, and most pervasive of human inventions. Their summertime incarnations demonstrate just how central they are to defining who we are. Freed by higher temperatures from most of their protective functions, in the summer textiles reveal their social side, becoming signs of who we are and what we value.

A combination of warm weather and cultural imperatives probably drove humans to invent cloth in the first place. During the last ice age, loose blankets and shawls fashioned from animal pelts no longer provided humans with enough protection from the wind and cold. People began crafting skins into layers of clothing fitted to the body. Complex clothing replaced simple wraps.

Then, as the ice age ended around 11,500 years ago, the climate changed. The weather got warm and humid. Garments made from animal skins became sweaty and uncomfortable, sometimes dangerously so. The obvious solution would have been to get rid of clothes altogether. But that’s not what happened, even in hot climates.

Like Adam and Eve with their fig leaves, people almost everywhere continued to cover at least their genitals with loincloths and girdles. Only in a few places where the climate had never grown cold enough to require complex clothing, such as mainland Australia, did everyday nakedness remain normal until contact with people from colder regions. “After wearing complex clothes for millennia—from at least 40,000 years ago in the middle latitudes of Eurasia—it would seem that casual exposure of the naked body was no longer socially acceptable,” writes Australian archaeologist Ian Gilligan in his 2018 book, Climate, Clothing, and Agriculture in Prehistory.

Freed by higher temperatures from most of their protective functions, in the summer textiles reveal their social side, becoming signs of who we are and what we value.

The oldest archaeological evidence of fabric goes back about 11,000 years—to around the time the world turned warm. Cloth required farming and herding to dependably supply enough fiber to make large quantities of yarn. A typical beach towel contains roughly five miles of yarn. A Roman toga required 25 miles. We owe agricultural settlement at least as much to the social desire for clothes as to the biological need for food.

The earliest surviving archaeological textiles demonstrate that cloth was more than purely functional. Fragments found in the Nahal Hemar cave in Israel’s Judaean desert date back nearly 9,000 years. They show signs of red pigment, as well as decorative stitching and embellishment with tassels, shells, and beads. At the Huaca Prieta mound on the northern coast of Peru, archaeologists have uncovered 6,200-year-old cotton cloth with stripes alternating natural beige with indigo-dyed blue, plus white highlights from a local milkweed plant. Someone went to a lot of trouble to create blue dye and make patterned cloth. Summer’s checked picnic blankets and striped beach towels, designed to do more than merely protect you from the dirt and sand, reflect the same decorative impulse—and the same basic knowledge of how to weave simple patterns.

Of course, textile technologies have changed a lot over the millennia, most of all in the 250 years since the first spinning mills opened in northern England. By making thread abundant, spinning machines changed the world. They reduced the time it took to spin miles of yarn from weeks to minutes—and eventually to seconds. By the turn of the 19th century, the speedy power looms invented in the mid-1880s had joined spinning mills to make textiles abundant for the first time in history, affecting not only clothing but sails and tents, sacks and sheets. These technologies made it feasible for a beachgoer to spread out on a towel whose thick pile of loops consume extra thread—terrycloth dates only to the 1890s—or for a bride to walk down the aisle in a special dress she only wears once.

Even more important for textiles’ cultural role was the development of synthetic dyes in the mid-19th century. Beginning with the purple that teenage chemistry student William Perkin accidentally concocted in 1856, dyes made in labs added every conceivable color to the textile palette. Hues that had once been difficult to achieve, such as intense blacks, purples, and greens, became commonplace.

Color not only gives cloth beauty. It imbues it with meaning. Just look at some of the world’s simplest textiles: banners and flags. The red, white, and blue of Independence Day in the U.S. and Bastille Day in France have symbolic meanings—valor, purity, and justice. Equally important, and the likely reason they are the most common colors of older national banners, is that blue and red are also easy to achieve with plant-based dyes: indigo for blue, and madder for red.

It wasn’t until the spread of synthetic dyes that the green and violet in the rainbow flag, and the intense blacks and greens of Juneteenth banners, became widely available.

Before then, greens were usually created by first dyeing with yellow and then with blue. The yellows tended to fade, which is why the medieval tapestries you see in museums often have blue grass. The best blacks, like the ones recorded in Dutch portraits, also required multiple layers of color, often starting with an indigo base. Ordinary people used brownish plant dyes, adding iron salts to deepen the color, to dye fabrics black. But none of these were as true as the blacks adopted as Pan-African symbols in the mid-20th century. Traditional African artisans were (and still are) among the world’s great masters of indigo, but the brilliant colors of African pride are products of modern chemistry.

Every new textile technology opens up new means of cultural expression, as people find ways to make fabrics their own and, through their textiles, to say something about who they are, where they belong, and what they love. In both substance and significance, cloth is remarkably fluid. Fabrics fold and bend and flap in the breeze, switch from two dimensions to three, conform to the contours of bodies and follow the terrain. In the sunny days of summer, especially, they become expressive declarations of identity and joy.