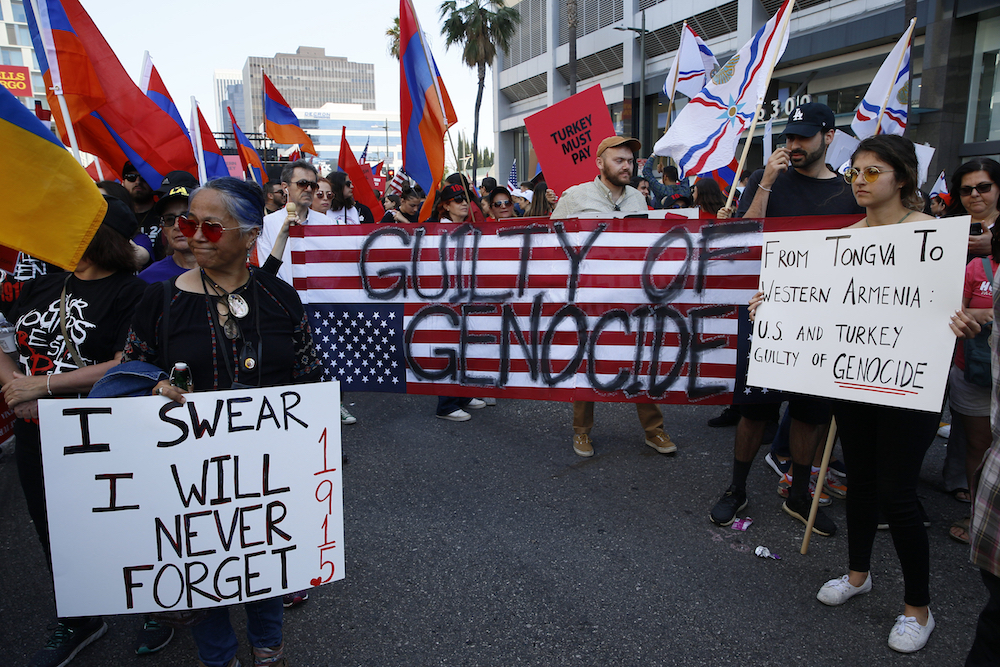 Protestors during a 2019 march to commemorate the deaths of 1.5 million Armenians under the Ottoman Empire. Courtesy of Damian Dovarganes/Associated Press.

In the media and in politicians’ minds, foreign policy often seems to take a backseat to other subjects such as the economy or social issues. But for the United States’ many immigrant communities, foreign policy is a kitchen-table topic—front of mind, almost all of the time, as they seek to influence the politics of their historic or former homelands.

From Tibetan Americans to Cambodian Americans to Palestinian Americans, many of these groups have rallied around causes, hoping to improve their homelands’ futures. Yet few have been as successful as the Armenian American community, which secured formal and explicit recognition of the Armenian Genocide from the Biden administration this year—the result of a single-minded, decades-long campaign that defied political obstacles, and reached across generations.

The Armenian American experience offers a crucial lesson to other U.S. immigrant groups working for change: Be patient, be persistent, and be prepared. The steadfast Armenian campaign for recognition needed the right set of circumstances to make its position an undeniable political reality—and when such openings for social change appeared, savvy activists in the diaspora capitalized on them, making such an outsized impact on the global stage. The U.S. government’s reversal on genocide recognition in April may have seemed sudden, but it was built on a century of cultural and political effort.

The cause célèbre for this community has been the pursuit of justice for the Armenian genocide. In the early 20th century, the Ottoman Turkish empire systematically killed or deported its Armenian population. Between 1915 and 1918, over 1 million Armenians perished. Soon after, the Ottoman government (and eventually, the Republic of Turkey) began a denial campaign that continues to this day, discouraging international recognition of the events as anything but an unfortunate but necessary instance of self-defense. The struggle to defeat this denialism provides a quintessential example of how power and entrenched political interests can stand in the way of justice. For over a century, it has fallen to survivors, their descendants, and the international community of human rights supporters to keep the memory of the genocide alive. At the very least, international recognition ensures a place in the historical memory for victims and survivors. Ideally, formal recognition can lay the groundwork for justice and restitution, similar to what was offered to survivors and descendants of survivors of the Holocaust in Nazi Germany.

The Armenian cause has always had an American dimension. The Armenian American community predated the genocide; even as the massacres were taking place, Armenians in the U.S. were already engaging the American government on the issue. The United States was involved in some of the policy failures that failed to prevent the massacres, and was also a player in contemporary relief efforts. Continually since the early 1900s, the U.S. has remained a leading immigration destination for survivors and their descendants who carry the torch of remembrance, and who have worked for official recognition of what happened.

From the get-go, geopolitical concerns created formidable obstacles. Successive U.S. administrations were hesitant to recognize the genocide; their priority was to preserve the U.S.-Turkish relationship as it was, with its supposed economic, political, and military benefits to both countries. The U.S. foreign policy establishment traditionally saw Turkey as a strategic geopolitical partner since the Cold War era, given the country’s location. And for decades, the Turkish government aggressively lobbied the U.S. government, identifying and supporting academics who shared and promoted the denialist stance, and manufacturing a false debate over the veracity of genocide claims.

Despite these roadblocks, Armenian Americans kept pushing for recognition. At first, these efforts—fundraisers, marches, and campaigns—were often helmed by survivors. Later, direct descendants took over. In 1981, Ken Khachigian—a White House speechwriter whose grandfather fled to America in advance of the Armenian genocide yet lost his grandmother in exile—wrote a Holocaust remembrance speech for Ronald Reagan that implicitly acknowledged the genocide, marking one of the first major instances of U.S. government recognition of the genocide. After significant backlash from the Turkish government, the U.S. government—particularly the State Department—walked back the remarks given political concerns at the time. Reagan and the State Department further disavowed those remarks throughout the 1980s, much to the ongoing chagrin of then California governor George Deukmejian—himself of Armenian descent. Deukmejian, a strong supporter of Reagan, was public about his disappointment but failed to elicit a change of heart among his peers.

For all its triumphs, the ongoing story of the United States’ approach to the Armenian genocide poses a cautionary tale for other immigrant communities in the U.S. affected by genocide. What does it take for communities to get their issues on the U.S. agenda, particularly in the face of entrenched political norms?

Yet advocates marched on, using other domains to keep the cause alive. At the local level, community leaders facilitated protests, and advocated for state- and city-level recognitions of the genocide across the U.S. One of the key Armenian lobbies maintains a list of hundreds of instances of acknowledgment, ranging from a memorial in New Jersey in 1965, an affirmation by the French National assembly in 1985, almost yearly state assembly resolutions in California from the 1980s onward.

On the cultural stage, successive generations of Armenian American artists also mainstreamed genocide recognition, relegating denial to the fringes. Nearly every Armenian American artist who gained mainstream popularity—from mid-20th-century author William Saroyan to the still-active metal band System of a Down to pop icon Cher—has engaged in some kind of public advocacy on the issue, or touched on the genocide question through their art.

Ultimately these local and cultural gains coincided with a shifting global context that made U.S. federal recognition of the genocide possible. Starting in the 2000s and driven largely by the cumulative power of these global advocacy campaigns, many governments in Europe and South America began issuing official recognitions of the genocide—and suffered few, if any, geopolitical repercussions. For all its bluster, the Turkish government could not make good on its promises to punish countries that challenged its denialism. National genocide recognitions, even if they were walked back or met with strong rebukes from Turkey, typically ended in little more than the recall of an ambassador.

Realpolitik became a factor, too. Today, Turkey is no longer the strategic U.S. ally it once was, as that relationship has been strained. Turkey has turned away from the U.S. in favor of stronger relations with Russia and China, while there has been a declining American appetite for engagement in the region. Genocide recognition became a safe—even, potentially, beneficial—political move. The bargaining chip of recognition was replaced with an opportunity for countries to demonstrate their (however belated) commitment to human rights.

Of course, despite the U.S.’s changed course on genocide recognition, the path to true justice for the descendants of survivors of the Armenian genocide remains unclear. If we look at the history of similar crimes against humanity, acknowledgment is supposed to be just the first step in a long and painful process toward reconciliation for survivors and their descendants. But it is highly unlikely that attitudes in Turkey will ever shift towards acknowledgment or reconciliation. The issue continues to be a flashpoint in contemporary Turkish politics. Today the ethnic cleansing of minorities is a point of pride for some of the country’s right-wing ideologues. Recently, one Turkish politician made headlines when he posted—in advance of Biden’s genocide recognition—a celebratory tweet lauding the masterminds of the Armenian genocide. He noted that Turkey is ready to proudly “do it again”—it being the supposedly non-existent Armenian genocide. In the face of outcry from a Turkish Armenian parliament member, he again threatened a repeat of the genocide.

Recognition of Armenia’s woes by the U.S. stemmed entirely from tireless and multigenerational advocacy, sustained for over a century. But to turn recognition into something more tangible, Armenian Americans will have to keep up the fight—offering yet another lesson for immigrant groups in the U.S. seeking influence on the world beyond. Picking one’s battles is a key question for immigrant groups, and that too was a point of contention for the Armenian community. Some critics of genocide recognition have expressed concern that if the Turkish government refuses to engage the issue, there may not be any value in creating international controversy. A notable critic of the focus on genocide recognition was Turkish Armenian intellectual Hrant Dink, who took massive steps to end the taboo on Armenian issues in the 1990s and 2000s in Turkey. While he was a fearless supporter of Armenians and other minority groups, he believed the obsession with recognition would come at the expense of cross-cultural dialogue. His political project was monumental, and is credited with opening in civic space in Turkey and breaking the taboo on the Armenian question. Yet his untimely assassination at the hands of a Turkish nationalist in 2007 was a cruel testament to the powerful potential of his message.

Waging a campaign for international recognition of a human rights issue is time-intensive, costly, and can be nearly all-encompassing for an immigrant community. But one cannot underestimate the historical and rhetorical benefits of international acknowledgment for crimes against humanity. Recognition offers a chance to firmly correct the record and bring an end to dangerous—and persistent—attempts at historical revisionism. In the Armenian case, the annual commemoration of the genocide leads denial groups in the United States to put up billboards, support scholars who falsely refute the killings, and even promote dancing flash mobs to erase the genocide from history or shift blame onto the Armenian community.

Genocide recognition was never a given for the global Armenian community, even though the people’s struggles have become the flagship issue associated with the violence of the late 19th century. Many instances of ethnic cleansing from that era have faded from view. The Ottoman Empire and early governments of the Turkish Republic committed atrocities against a range of minority communities, including ethnic cleansing campaigns against the Assyrian and Pontic Greek communities concurrent with the Armenian genocide. Other immigrant groups in the United States—not yet able to draw attention to their cause—may feel their own historical struggles are already in danger of erasure.

For all its triumphs, the ongoing story of the United States’ approach to the Armenian genocide poses a cautionary tale for other immigrant communities in the U.S. affected by genocide. What does it take for communities to get their issues on the U.S. agenda, particularly in the face of entrenched political norms? This question looms not just for historic injustices but also for ongoing atrocities, such as the genocide of the Rohingya community in Myanmar, and the ethnic cleansing of Uyghurs in China. Many other immigrant groups in the United States are far smaller than the Armenian community, and may face even steeper hurdles as they try to change their own political realities. But without a doubt, supporters of human rights should heed the lessons of the Armenian case: recognition requires tireless commitment from survivor communities. It is only that commitment that can keep the prospect of justice alive.