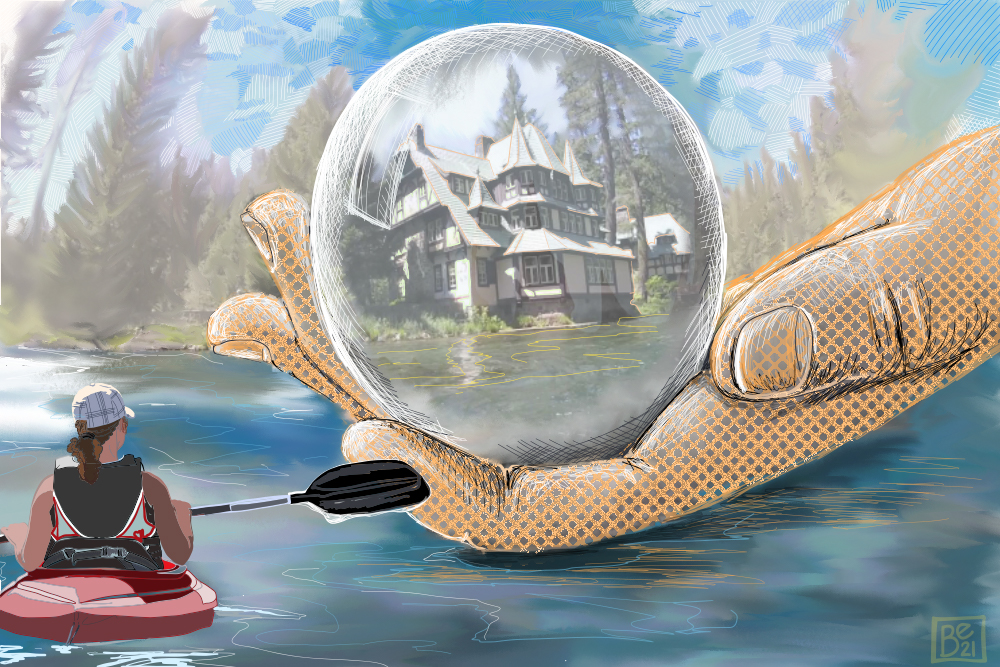 It’s preposterous to think that William Randolph Hearst needed a second summer retreat to get away from the ultimate California retreat, his castle at San Simeon.

It strains credulity to imagine a party-throwing media tycoon building a super-quiet, Bavarian-style village along a remote river on Mt. Shasta’s southeast slope.

And the longstanding tales—offered by visitors and residents, including Hearst’s longtime companion, Marion Davies—of Wyntoon as even more beautiful, comfortable, and magical than Hearst Castle are simply unbelievable.

If a place like Wyntoon really existed, wouldn’t every Californian know it? Wouldn’t millions of visitors from around the world have toured the Bavarian village? How could such a place remain hidden in the anonymity of the North State wilderness, in an age when even Yosemite requires a reservation? Yet Wyntoon, allegedly, persists as a strictly private retreat, visited only by generations of Hearst family members during the summer months.

To believe Wyntoon is real is to accept that California, full of so many wonders, also has its own Brigadoon—the invisible Scottish village, in the Lerner and Loewe musical, that appeared for only one day every 100 years. And you have to ask yourself: just how many rich and magical places can one state contain?

To be fair, there is enormous documentary evidence of Wyntoon’s existence—books, papers, photographs, public records—in the material about Hearst and his properties. I’ve been obsessively reading everything I can about the man as Zócalo Public Square moves into a historic Hearst property, the Herald Examiner building in downtown L.A.

But the Wyntoon stories in this published record seem more the stuff of myth than anything else.

This mystical village supposedly sits along bends of the McCloud River, on more than 60,000 acres of land where Siskiyou and Shasta Counties meet. The histories claim that the place was used as a fishing and hunting resort in the 19th century, until Hearst’s mother Phoebe, after visiting the land, acquired an interest.

To believe Wyntoon is real is to accept that California, full of so many wonders, also has its own Brigadoon—the invisible Scottish village, in the Lerner and Loewe musical, that appeared for only one day every 100 years.

There, the story goes, she built a giant Gothic German castle, where her grandchildren—William Randolph Hearst’s children—loved to visit her.

When she died, she left Wyntoon to her niece, infuriating her relentlessly acquisitive son, who had only received San Simeon, a Mexican ranch, a Butte County orchard, and millions of dollars in other properties and securities. Hearst—who reportedly wanted Wyntoon both as a place to store his European art and, yes, as a summer retreat from his summer retreat—battled his cousin for six years before she surrendered and sold it to him.

Here’s where the tale jumps the shark. After the castle at Wyntoon burned down in the winter of 1929–1930, Hearst planned to build an even larger castle, using materials from a monastery in Spain that he had acquired and dismantled. But money grew tight in the Depression, and his go-to architect, Julia Morgan, sold him on creating a Bavarian village instead, with large guest houses built from local stone and wood along the river and around a grass clearing.

Morgan, who designed more than 700 California buildings and was constantly working on other Hearst properties, including San Simeon, somehow found the time to supervise Wyntoon. She managed every little bit of its design and construction, from the steep roofs to the landscaping. Fittingly, the guest houses—with names like Cinderella House, Fairy House, and Bear House—were decorated with murals of fairy tale scenes.

The apparent myth then takes a Hollywood turn. After Pearl Harbor spurred concerns about coastal bombings, Hearst closed San Simeon and moved to Wyntoon. Historians want us to believe that prominent people, rarely seen that far north in California, visited: among them Clark Gable, Louis B. Mayer, the Lindberghs, and Joe Kennedy and his young son Jack, who recklessly swam in the McCloud’s 44-degree water.

“There was a calmness about it that really appealed to me,” Davies wrote of the retreat in that era, according to David Nasaw’s magnificent biography of Hearst. “Our happiest times, I think, were at Wyntoon.”

We are also supposed to believe that Wyntoon was so calming that it inspired the rough-and-tumble tycoon to write a poem, “The Song of the River.” Even in the 21st century, Hearst newspapers reprint this ode to the North State’s wonders on the anniversary of his death.

The snow melts on the mountain
And the water runs down to the spring,
And the spring in a turbulent fountain,
With a song of youth to sing,
Runs down to the riotous river,
And the river flows to the sea,
And the water again
Goes back in rain
To the hills where it used to be.
And I wonder if life’s deep mystery
Isn’t much like the rain and the snow
Returning through all eternity
To the places it used to know.

Here’s something even more incredible about Wyntoon. Seven decades after Hearst’s death, his family—in an era when old newspaper families have lost their properties and empires—keeps control of the property through the privately held Hearst Corporation. The family has supported local firefighters and free health clinics, and developed a sustainable logging program that protects the land from fire and produces revenue.

Yes, a few important outsiders—legislators, Cal Fire, the forest service, local law enforcement, philanthropists—say they have been allowed in (and insist the place is real), but otherwise, it’s just family sharing in Wyntoon’s wonder. While money can buy anything in America, a family member says the place is not for sale at any price, or ever.

Does any of that seem remotely real to you?

Me neither. When I was visiting the nearby town of McCloud, I tried to get to Wyntoon, and couldn’t. The road is blocked by a gate—four miles away from the supposed location. All the paths through the woods are closed and forbidding. Local kayakers say you can see Wyntoon’s guest houses by going down the rocky river—but by that point, you’re so cold and wet, you might be hallucinating.

I want to believe that the legend is real. Perhaps the fact that Wyntoon seems a fiction is actually a form of protection for a special place that would be overrun if the public ever got access. Perhaps, it should be comfort enough to know that such a heavenly spot might actually exist. But as a journalist, I try to see things for myself before I believe them. And so, I am waiting on the Hearst family for my invitation.

I should be free Labor Day weekend.