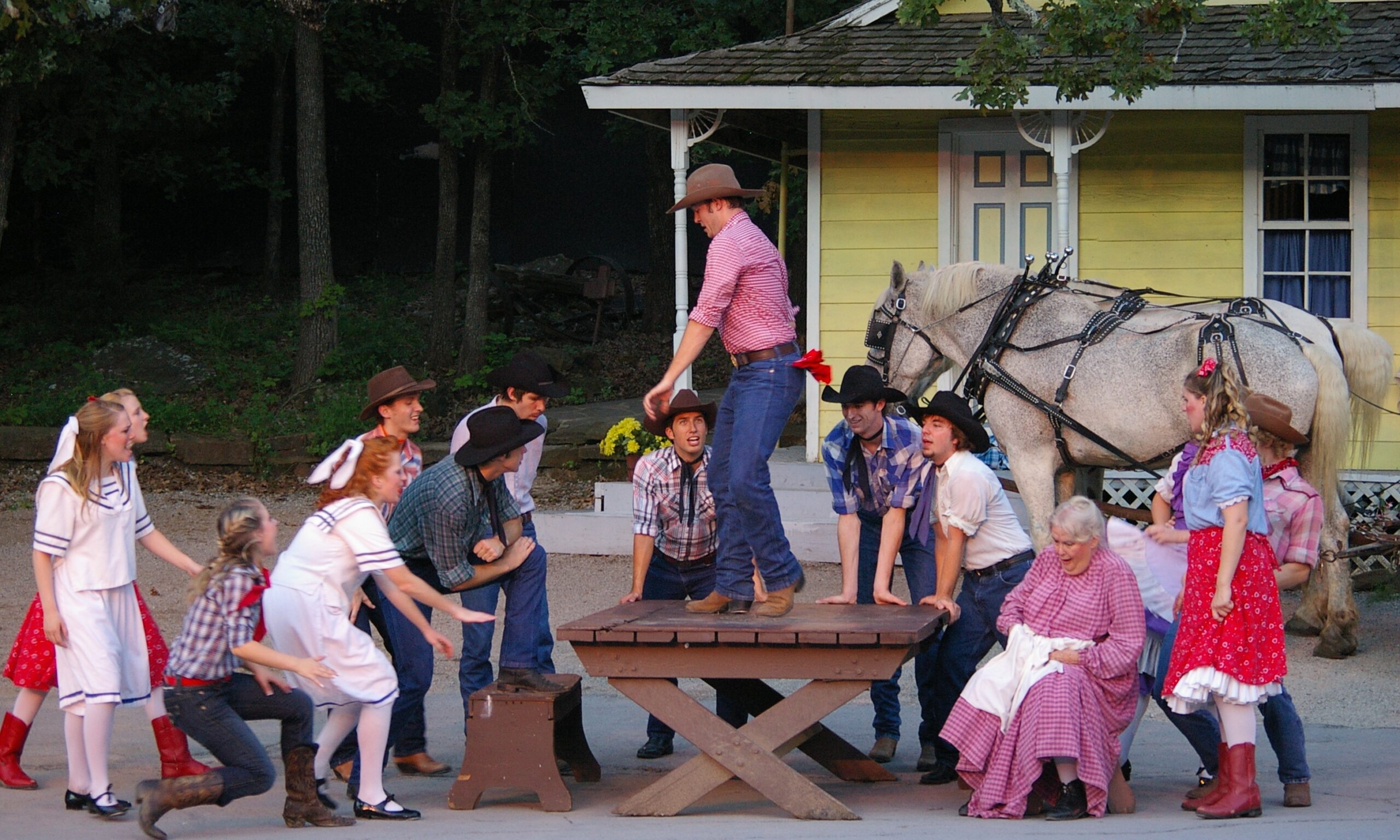 If there’s a more rambunctious and promiscuous genre than musical theater, I haven’t met it yet.

Musicals are an everywhere phenomenon. They touch an enormously broad swath of American lives, unapologetically building worlds that don’t yet exist. I see this commitment to the not-yet as an aspiration for the rest of us stuck living in the here-and-now.

I recently wrote a book about musicals, and visited communities in the heartland that were using musical theater to help understand their place in this country. I watched an original musical about Samson and Delilah in Branson, Missouri; took note of the prestigious musical theater training centers in Cincinnati, Ohio and Oklahoma City, Oklahoma; and discovered traces of musical theater cultures in remote corners of Oklahoma, Arizona, and beyond. I chose to focus on the middle of the country because that’s where so many of America’s favorite stories about itself take place, the characters here extreme in either their moral winnings or their moral failures. It’s no surprise that this is where so many of America’s iconic musicals like Oklahoma!, The Wizard of Oz, or The Music Man spin their clever fantasies, the Professor Harold Hills hopping off trains and stealing their way into our hearts again and again. But ya gotta know the territory.

In musicals as in real life, the middle is a powerful idea in this country. Caught between reality and fiction, truth and fantasy, and the amateur and professional, musical theater in the middle of America captures the heart of what this place can be on its best-dressed days. Musicals break through class and political strata in America better than any other style of entertainment; and because these productions often involve whole communities, audiences and performers in the heartland reflect a more dynamic mix of race, class, gender, and religion than any Times Square theater has been able to manage. It may be that musical theater in the middle of America, with school performances of The Little Mermaid and church sermons expounding the traditional family values of Fiddler on the Roof, captures wide-eyed American possibility better than Broadway ever could.

Caught between reality and fiction, truth and fantasy, and the amateur and professional, musical theater in the middle of America captures the heart of what this place can be on its best-dressed days.

I grew up in rural Oklahoma, and always knew first-hand that musical theater mattered here. Middle school and high school productions were frequent even in my small town, and the several churches in the area put on musicals regularly, to say nothing of the ease with which Broadway tunes like Carousel’s “You’ll Never Walk Alone” and Godspell’s “Day by Day” made their way into weddings, funerals, parades, and revival meetings. It wasn’t until I scanned wider that I discovered how it mattered in these overlooked, under-examined spaces. Musicals spread across the geography of this place in ways that illuminate how we believe and imagine. In place after place, musicals matter because they help us practice belonging to America and continue believing in it.

Take the fundamentalist Mormon community in rural Arizona who adapted The Sound of Music into a polygamous propaganda piece where songs and dances swapped from other musicals made sure the governess Maria fell not for a grieving captain with seven children but rather for a multi-wived captain happily seeking yet another. The production was shocking and also touching. Its creators crafted an idea of America in their own image by crafting a musical where they belonged. Their example shows how musicals help communities of all kinds rehearse living in better versions of America. How can you belong in America, they ask, if you don’t first find yourself in an American musical?

It’s no surprise, really, that you find musical theater mattering in profound ways within religious settings, in those American communities where faith matters most. A performance of the musical Samson in Branson, Missouri, used the magic of the stage to make Samson and Delilah’s distant (if not mythical) past align with values of today’s evangelical Christianity—the musical providing the enchanted spackling to cover gaps and cracks in a modern religious façade troubled by secular reasoning. Through strange rituals and performative customs, musicals, like many religions, look beyond this world with bleary-eyed anticipation. All things will work out in the end, they celebrate. And in the end, we can live in a world that has been fully remade, with villains banished and problems resolved.

In her 1966 book, Purity and Danger, the anthropologist Mary Douglas noted that communities decide what makes dirt dirty, that describing something as “dirty” has little to do with impurity; rather, dirt is, as she put it, “matter out of place.” I’ve come to think of musicals in similar ways. Musicals lie about the world—they smooth over our reality with their alternate one, where people burst into song and dance and strangers know one another’s choreography. They rush to simplified and tidy endings, and unlikely reconciliations. I saw this in a homemade production by the Oklahoma Senior Follies in which senior citizens portrayed youthful scenes of lust, danced suggestively, and good-humoredly essentialized the older years as the best time of their lives. Americans often conflate increased aging with decreased value. But through the musical stage, aging performers created a not-yet world where this was not the case. Our here-and-now world doesn’t work that way.

Musicals are clever lies—and we need more of their deceptions. Lies have a bad reputation. With truth a fluid concept these days, it sometimes feels as if we are stuck pitting one set of truths against another and battling it out indefinitely. Lies offer a way out. They open space for stories about worlds that don’t yet exist. They give us a chance to invent the kind of idylls we want to live in, places more committed to justice, community, and healing. Don’t get me wrong, truth does matter. But there are times when telling a lie is more righteous than being honest: when doctors recommend a harmless placebo for an anxious patient, for instance, or when one flatters a friend with exaggerated feedback they want to hear. Lies are exercises in imagination, hotbeds of creativity, projections of promise. Lies, like musicals, to borrow Douglas’s phrase, are stories out of place.

This lesson gets lost if we crease musical theater’s map to only one city—New York—and chart performances only as some escapade of selling silliness. The pandemic has given America an opportunity to rethink where, how, and why musicals happen. Broadway may be returning with ticker tape but my experiences in the middle of America suggest that musical theater ought to be re-placed—reimagined as powerful, multi-sited performances of an America that might be.

I am happy for the return to normalcy Broadway’s reopening signals. I am glad for my friends and former students whose livelihoods depend on the theater industry. And I’m glad for the laughs, tears, and thrills audiences can once again come to expect night after night. But I also keep it in perspective. Musical theater is bigger than Times Square. Its hopes and dreams and fantasies and deceptions spill the banks of New York, flowing through the hills and cities of America’s middle lands and into the hearts and minds of people most would never think to associate with musical theater. Musicals are as big and wide as America, and America can only be as big and wide as our musicals help us to imagine.