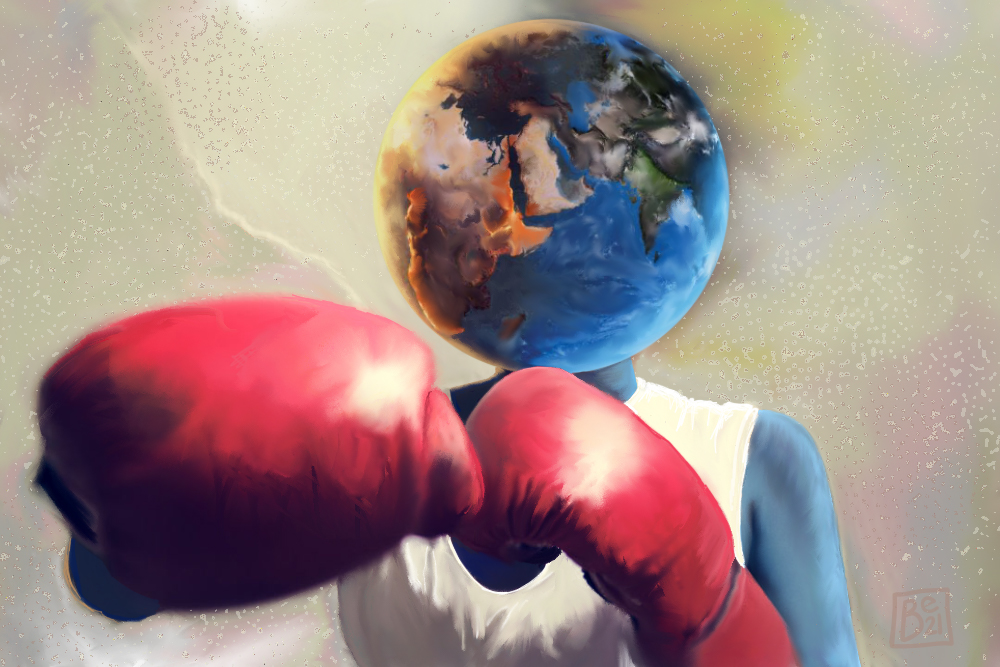 The climate breakdown, which so many of us assumed lay far in the future, is upon us now.

Extreme weather conditions abound—drought, wildfires, super storms, floods. A recent and terrifying report from the United Nations’ Intergovernmental Panel on Climate Change suggests that more of the same is inevitable, and that the window to avoid the most horrific outcomes is rapidly closing. Only by reducing emissions by 45 percent by 2030 and reaching net-zero emissions by 2050 can we limit the temperature rise to 1.5 Celsius, the panel concluded. Even that best case scenario involves devastation—such as an Arctic region that sees a month every year without sea ice—and damage that is irreversible. Still, world leaders ignore pleas for action.

In this situation it makes sense to be scared—and to take a cue from empowerment self-defense (ESD), a feminist self-defense practice that pays close attention to the relationships among fear, anger, and action. By harnessing the power of fear, ESD shows a path forward for climate activism, too.

It’s worth thinking about the benefits of fear. In the home, in public spaces, and on a global scale, fear is an emotional and cognitive response that expresses itself through physical states: hair standing on end, a tightness in the chest, an accelerated heart rate, a queasy feeling. These signals appear as the brain picks up on sensory cues that the conscious mind might miss. Together, they form what we call our intuition, and they fuel self-protection and survival. Fear helps us figure out which threats to respond to and how quickly, and what obstacles are mere annoyances that we can safely ignore.

And yet, modern society teaches us to second guess our fears, to allow our minds to slip into denial in the face of potential danger. So it’s no wonder that some politicians, journalists, and scientists urge restraint in how we talk about the climate crisis. Scientific reticence has, until recently, encouraged climate researchers to speak in the bland language of parts per million, and of change rather than breakdown, allowing scientific skepticism to blur into climate denial. Journalists have adopted neutral-sounding terms for ecological catastrophe such as “global warming” rather than “global heating,” and “climate change” rather than “climate crisis.” Even some climate activists suggest that fear can only motivate people in destructive ways.

In fact, a healthy dose of fear might motivate us to work harder—and empowerment self-defense shows how and why. For instance, ESD teaches us to confront denial, a common response to interpersonal violence (and to environmental breakdown). When a person encounters a stranger’s violence—a grab, a slap, a shove to the ground—the defender often spends precious response time thinking “this can’t be happening.” Many of us, especially those of us raised as girls, are taught that our safety is someone else’s responsibility and that a bystander or an expert will intervene and save us.

Fear helps us figure out which threats to respond to and how quickly, and what obstacles are mere annoyances that we can safely ignore.

Empowerment self-defense confronts this kind of withdrawal directly, replacing the denialist statement “this isn’t happening” with a question: “What’s going on?” ESD students practice actively enlisting the support of bystanders, through specific instructions or requests. These strategies replace a dependence on others with the ability to actively engage them, acknowledging fear and confronting it head-on.

An insidious form of climate denial contends that someone else—politicians, scientists, or entrepreneurs—will solve the problem for us, or that individual, incremental change alone—energy-efficient lightbulbs, carpooling, recycling—will avert disaster. By using ESD methods, we can train ourselves to respond more actively to the environmental crisis, replacing “I can’t believe this is happening” with “This is happening, and it’s occurring more quickly than expected. What can we do about it? And how can I mobilize others to tackle this problem?”

ESD provides a roadmap for that mobilization. When women, the feminine-identified, and non-binary people train in self-defense, they fight social norms that tell them to be polite and accommodating at all costs, and to doubt their physical strength and cognitive skill. ESD normalizes the resistance of women and other marginalized groups to violence and makes the unimaginable—a society that celebrates their autonomy—achievable. Because it brings together threat appraisal, social critique, and the expansion of our options, empowerment self-defense demonstrates that individual, self-protective action can support systemic change. We can replace a justification—“I’m just one person; what can I do?”—with a provocation: “What can I do?”

In climate action, too, our personal choices can be springboards for larger interventions. We can ride the bus and we can lobby city leaders to make public transit more efficient, welcoming, and comfortable. We can choose a plant-based meal and convince our workplace eatery to shift its menu toward a plant-forward approach. We can forego one airplane ride and encourage our employers to offer extra vacation days to employees who chose ground over air travel. Personal choices show us what is possible. They also remind us where constructive action remains difficult, thus illustrating where we need structural change.

In a situation of harassment, aggression, or even outright assault, ESD acknowledges, many people are so unwilling to make a fuss that they quietly convince themselves that a situation can’t be urgent if others are allowing it. The psychologist and climate activist Margaret Klein Salamon makes a similar point about environmental collapse: People look to one another for cues as to how to behave. If everyone around us just shrugs and moves on, we assume that we are alone in our assessment of the situation, a phenomenon known as pluralistic ignorance.

Salamon offers a solution to pluralistic ignorance, one that is familiar within empowerment self-defense: Get loud. This can mean joining a climate march or participating in a climate strike—or talking to friends, families, and elected officials about the life and death nature of this crisis. When we make noise, literally and metaphorically, we also give others permission to put forward their demands for a safer, cleaner, more just world.

Fighting, in ESD training, refers to literal, combative action. But fighting also includes complete commitment. It entails using all the resources we have at hand: If one thing doesn’t work, try another, and don’t give up. Research on ESD suggests that active resistance works. Activism is effective when the improbable becomes normalized; personal and small group actions make such alternatives conceivable. Smaller efforts can encourage us to question a broader economic and political system built on the burning of fossil fuels and on industrial, animal-based agriculture.

In order to protect life on our planet, we need to treat the climate crisis as the self-defense situation that it is. We do not fear climate catastrophe enough. When we cut through our denial, resist climate doom, call attention to the crisis, and recognize that we can make a difference, we can reshape our world, and push our leaders to enact better policies. Heeding our immediate responses to environmental breakdown—the surge of adrenaline and cortisol that can accompany images of disaster, the unease in the realization that our home or our neighborhood could be next, and the accompanying sense that we need to do something—can motivate us to save our environment. The key is reacting to these responses before we rationalize them away.

Effective self-defense harnesses fear and anger to generate an appropriate response. It focuses on the many things we can do, not on the one or two things we should do. Empowerment self-defense shows us that when we fight we expand our world rather than narrow it. And this is the most exciting lesson of all for the environmental movement: When we fight, we can win.