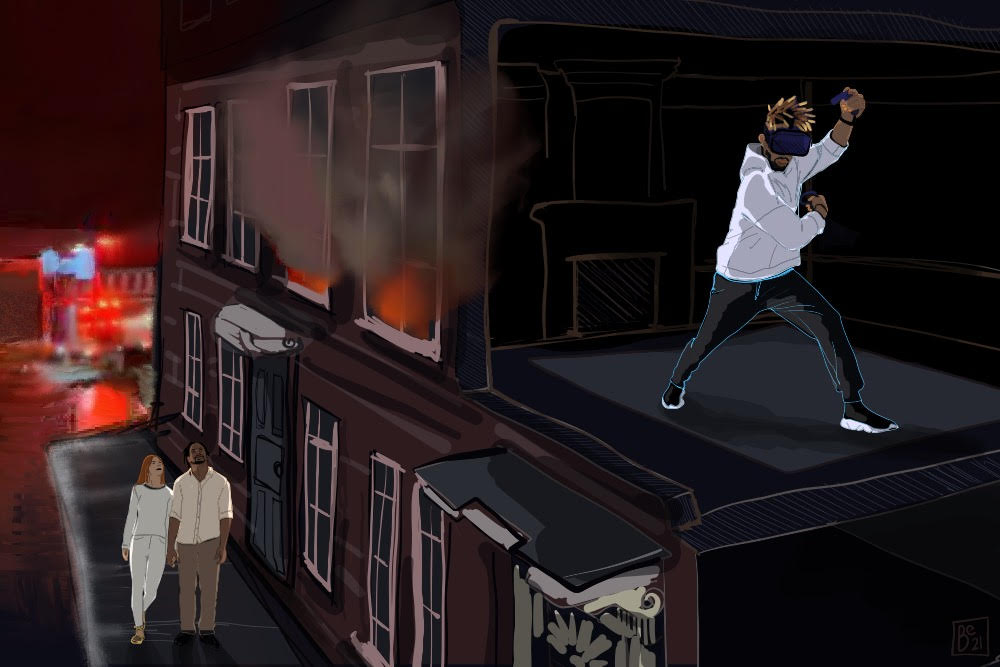 Three years ago, my wife and I moved from a spacious apartment. What we couldn’t fit into our new digs, we gave away. A colleague’s son, planning his own future in another state, got the bulk of the remaining furniture. When we had filled his rented U-Haul, the apartment was left barren and lifeless. Craving light and life, not to mention margaritas, we offered to take him to dinner before his departure the next day. But he preferred to stay alone amid the emptiness. He seemed happy, even a bit giddy, for us to leave him there.

In his mind, he was not alone. He showed us his Oculus Quest headset and introduced us to virtual reality with a string of superlatives. He even let us try it on and take it for a spin. But he really wanted us to leave—have an extra margarita if possible—so that he could resume his exploration of new immersive VR worlds. So we left him there, in the bare living room, to have our dinner and drinks.

When we returned, night was falling. We opened the apartment door and found the space void and shadowed. We heard the young man before we saw him, shoes squeaking on the hardwood floor, exhaling like a tennis player. As our eyes grew accustomed to the growing darkness all around, we saw him in his headset pirouetting across the room, sweating from exertion, completely engrossed, absolutely absorbed in his pursuit. We watched him for a while before we turned on the lights. Even then, he never wavered, never once recognized that we were there or that anything else existed besides his alternate reality.

Finally, my wife got his attention with a soft gesture, a hand on his shoulder. Had we been burglars we could have taken what we wanted—so long as we did not disturb his passionate endeavor.

There had been no bridge between us until that touch brought him out of his virtual explorations and back into the comparative banalities of apartments and U-Hauls. This wonderful young man had been not just oblivious to us: He was unconscious of us. And it was entirely his choice to be that way.

This wonderful young man was not only oblivious to us: He was unconscious of us. And it was entirely his choice to be that way.

We share this time and space with people who might be called The Oculus Generation. A little over 10 years ago, teenage Oculus founder Palmer Luckey took his passion for vintage gaming consoles to Kickstarter, joining up with gaming giant John Carmack to fund the virtual reality headsets that would become known as Oculus Rift and Oculus Quest.

The word oculus comes from the Latin for a round or eyelike opening or design. The ancient Romans used oculi in their architecture to let the rain in and fall to the floor, where it would be carried away via channels and drains designed in the floor.

This function may seem a far cry from the Oculus Rift/Quest systems and technology. But perhaps there is a connection between the original etymology and the way that VR designs a system that reroutes one’s attentions, absorbs one’s energy away from the world outside, and—like water—drains us along interior channels and conduits.

We have become inured to the constant channeling of our attentions. Algorithms anticipate our every need (or so we allow ourselves to think) with data mined from the history of our online activity, while Big Media plays to our biases, simplifying the problems of the world, and making us feel as if we are in the right. Using clues both actively and passively shared by and about us, media fashion a world where each of us is the lead in the movie of our lives.

No one wants to be in a lousy movie with nothing happening, so our plotlines need twists and turns. Virtual reality provides them. The stories of VR are full of heroes —because such stories work. Every turn in every VR story is made to revolve around us in a personal way. We are made to feel that we can interact with the virtual heroes and villains that populate these realities—that they interplay with us, that they listen with us, that they care. Having denizens from an alternative world compete for one’s attentions at every turn is exhilarating, and—in a time where feelings of loneliness have hounded us all—provides a sense of constant company.

Of course, virtual reality is not our only friend.

Occasionally a good book or a great Netflix series can hijack our senses in a good way, as great stories have kept us in thrall since the Greeks and before that, all the way back to spitting campfires, cave paintings and the roots of storytelling.

We might stay up all night occasionally to binge and take a sick day to recover. But we have never quite been at a moment like this, when the gaming device hijacks the way we receive stimuli—rendering us oblivious to the here and now, fundamentally deaf and blind to what’s really going on all around us.

If our apartment had been on fire, that young man would have been the very last to know.

Although my own experience with gaming ended in the late 1970s with Pong, and 3D movies are something I largely avoid, I consider myself Oculus Generation-adjacent. After all, I have spent the bulk of my life imagining plays in shadow boxes of one kind or another, and telling stories that are meant to pull the audience outside of their own skins and spirit them away from their quotidian lives and selves. So, I’m a fine one to talk.

Theater is, itself, an outdated oculus, tarnished and chipped, but still wildly effective when used correctly. Talk to any Hamilton superfan—even five years after its stage premiere—and a quote from the soundtrack is likely to pop up somehow.

Of course, we in the theater don’t force you to use goggles or headsets. When you see a play, you are free to look on stage or off at the audience, or do figures in your head, or close your eyes and take a pleasant nap. And—unless you’re attending The Mahabharata, which clocks in at nine hours or so—the play will be over soon enough.

The real distinction is in the gesture, the way that we read one another. Gestures speak to us in ancient ways, going all the way back to our nonhuman primate days, passively informing us or actively communicating a sign or symbol. Gestures can make us feel welcome, or they can turn us away from something or someone with an urgency far stronger than words.

Whether the play is good or bad, Theater gestures for a shared space that fosters connection. Oculus gestures for us to disconnect.

But perhaps I’m just being defensive and old hat.

Perhaps I just don’t understand. I don’t game, I avoid social media, and I freak out when I’m at Target and my phone pings with a personalized offer on aftershave.

Perhaps I am the one who has disconnected, or at least is trying to.

Perhaps we all are the Oculus Generation—and have been that generation, at least since the days of the Sony Walkman. Perhaps we are left (literally) to our devices, even as the reality we were born into floods and quakes and burns. We wear goggles as the Earth shudders.

To truly immerse oneself in a chosen alternate reality, one must become insensitive—asleep—to everyone and everything that threatens to interrupt the ride. When I hear about people still denying COVID-19, rewriting American history to uplift the Confederate cause, or following the QAnon rabbit down the hole of insurrection, my mind connects to that young man flailing about in the deepening shadows of an empty room. We may have shared one physical space but we lived in alternate universes.

My purpose here is not to castigate those passionate for the exploration of alternate universes. Those who seem disconnected or lost in this world might instead be plugged into a thrillingly immersive cosmos that they consider far superior to real life. But unless we are prepared to nudge them out of that reality, and back into our own, we may never really know.

Besides, there is always the odd chance that the apartment may be on fire.