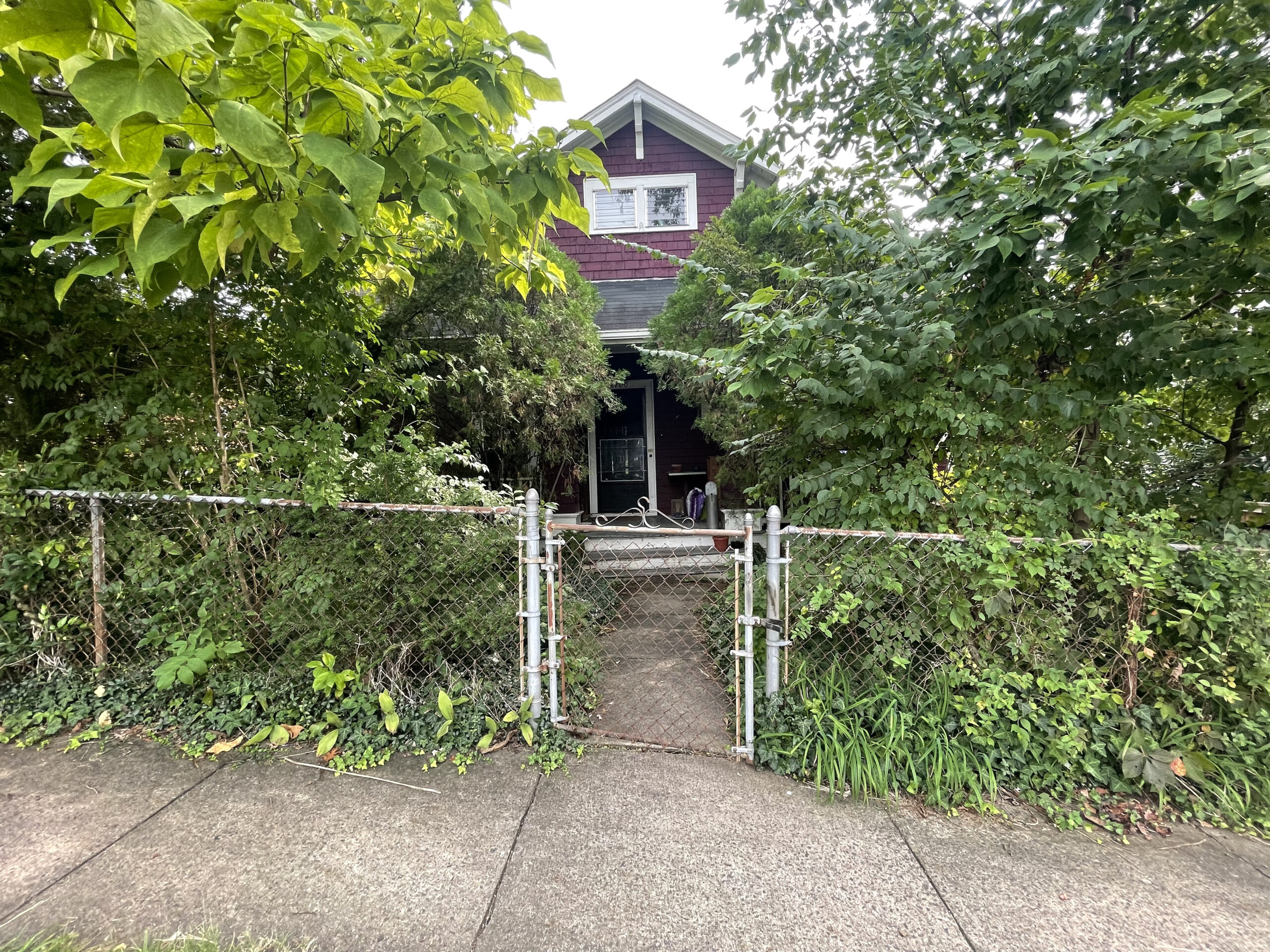 Dischord House, in suburban Arlington, Virginia, is a living memorial to D.C. hardcore—a place fans flock to to celebrate punk’s past. Courtesy of Shayna Maskell

Walking through the leafy Arlington, Virginia, neighborhood of Lyon Park, you might not even notice the bungalow-style house with its fading red paint and overgrown lawn, a relic from the post-World War II housing boom in the Washington, D.C., suburbs. On the front porch sits a middle-aged white dude in a beanie hat.

This particular dude is Ian MacKaye: hardcore punk demigod. And 2704 N. 4th Street, the red bungalow, is the magical and storied abode that housed MacKaye and his fellow punk divinities—the Dischord house, a symbol for what D.C. hardcore was, what it is, and how it is remembered. Hardcore music was innovative, aggressive, and uncontrollable, and it mirrored the way young people felt about the world around them during the 1980s. It provided a refuge from the demands of Reagan’s America and the power brokers of D.C., and an ethos that refuted compulsory capitalism and consumption.

And for the D.C. hardcore scene, the suburbs were the figurative enemy and ally, rolled into one.

It was October of 1981 when MacKaye and his friend Jeff Nelson,19-year-old musicians, moved into the Lyon Park house. Their newly formed record label, Dischord, was headquartered in a bedroom off the kitchen, but still maintained a mailing address in D.C., at MacKaye’s parents’ house, just in case. It was a label borne from a presumptuousness perhaps only afforded to white, middle-class teenagers: a desire to record and press their own music. The kids had a band, Teen Idles, and they wanted to make hardcore punk. Their songs lasted no longer than one minute and 30 seconds and included anti-consumerist screeds like “Fiorucci Nightmare” and anti-mainstream punk diatribes like “Fleeting Fury.”

Hardcore was not simply a reaction to mainstream popular music. Hardcore was a reaction to mainstream punk, circa 1980. Punk’s roots lay in the underground, antiestablishment alternative “proto-punk” sound of American bands of the late 1960s like the MC5, the Velvet Underground, and Iggy Pop and the Stooges, whose lyrics and music were intentionally and emphatically avant-garde, inaccessible, and bordering on the edge of cacophonous discordance. Punk’s first wave followed in the early to mid-1970s, anchored in New York City. Bands like Suicide, New York Dolls, Television, the Dictators, and (of course) the Ramones made rock songs quicker, harder, and dirtier, solidifying punk’s combative, crude sound and advancing the scene’s commitment to the disaffected, marginalized, and discontented. Rebellion, confrontation, and emotion were vital. Technical skill, an expression of musical elitism, was not. Punk wrenched the production of music from the few and put it in the (sometimes maladroit) hands of the many.

By 1975, when the next wave, British punk, emerged—Sex Pistols, the Damned, the Buzzcocks, the Slits, Siouxsie and the Banshees, and the Vibrators—punk’s sound and attitude had become solidified and familiar in the American music scene, too. It was time for a further rebellion—hardcore—to take a sledgehammer to it.

For the D.C. hardcore scene, the suburbs were the figurative enemy and ally, rolled into one.

Hardcore flourished in the D.C. area, where the style attracted a small, fiercely dedicated, and wholly discontented audience of youth. The Dischord house’s sleepy Virginia location was fundamental to hardcore’ essence. Suburbia was a symbol of everything D.C. hardcore stood against—privilege, conspicuous consumption, and the proverbial white picket fence—but it was this exact privilege that allowed Dischord to flourish.

Hardcore was a primarily white, middle-class music and scene. MacKaye and Nelson’s band Teen Idles emerged out of Wilson High School in upper-middle-class Northwest D.C. MacKaye, the bass guitarist and backup singer, came from a family of writers active in the civil rights movement; Nelson, the drummer, grew up primarily overseas, the son of a State Department worker. But MacKaye and Nelson did not fit the cookie-cutter model for children of the Washington power elite. People in D.C.’s first wave punk scene mockingly labeled the Idles “teeny-punks”. But Teen Idles turned the joke around, ultimately adopting the disparagement “Georgetown punks” as a rallying cry.

More than only the sound of D.C. hardcore, MacKaye, along with others in the scene, refigured what it meant to be young by embracing straightedge, a moral and social code known for its abstention from drugs, alcohol, and promiscuous sex—a credo that was a reaction to the vice-laden punk scene and the D.C. yuppie moneyed contingent. It advanced a response to Reagan-era conservatism by constructing an alternative, communal D.C. identity that gave its followers a way to negotiate the often-hostile waters of their city.

The suburban house was an unexpected, but ultimately fitting, element of the effort. It was, at least in part, a practicality. MacKaye and his bandmates were teenagers, after all, and the house checked all the necessary boxes. With a rent of just $525 a month, it was affordable (MacKaye worked at a movie theater and at a Haagen-Dazs in Georgetown, and also delivered newspapers before dawn, while Nelson had a job at the 7-Eleven across the street); it was safe (friends could take the bus or Metro to get there, and bands’ musical equipment wouldn’t get stolen); and it was detached, creating an accessible and neighbor-sensitive space to practice noisy music. It was also the first place most of these teens lived outside their parents’ homes.

Teen Idles pooled funds from playing shows to produce its first—and only—album, Minor Disturbance, and MacKaye, Nelson, and bandmate Nathan Strajcek created Dischord in 1981. The record label was intended to be the embodiment of a sacred tenet of hardcore, Do-It-Yourself (DIY)—a way to release albums that no other label would touch, and to stand against the monolithic capitalism of the music industry. Dischord had no contracts with bands, no lawyers, no demands for saleability, and no merchandising. It documented the sound and the scene of D.C. at a time when nobody else would, and made sure that the rest of the country—even the rest of the world—could hear the dissonant fury.

But just as Dischord, the label, was not just about the functional, neither was the house. It became the spiritual epicenter of D.C. hardcore, a group home and safe space for bands. Its basement served as a practice room, a social space, and a business center. Band members and friends sat around gluing together record sleeves and folding lyric sheets. Nelson hand-drew album covers; others salvaged cardboard from the 7-Eleven’s dumpster to make shipping containers for Dischord’s records. Band members and fans decorated the boxes and hand-wrote mailing addresses, distributing their 7-inch records through mail order or direct sales to record stores. Dischord House was always intended as a place to create music and forge the scene, and never as a vehicle for making money. MacKaye and Nelson were wary of commodifying and ultimately neutering the oppositional sting of hardcore.

The Dischord label grew and evolved to parallel the D.C. hardcore scene itself. When Teen Idles broke up, MacKaye and Nelson formed the seminal band Minor Threat, and Dischord released all of the group’s albums. Dischord backed No Policy by State of Alert, fronted by MacKaye’s best friend Henry Garfield, soon to become famous as Henry Rollins, lead singer of Black Flag. The label released albums by nearly all the titans of D.C. hardcore: Teen Idles, State of Alert, Minor Threat, Government Issue, Youth Brigade, Faith, and Void.

Hardcore, as it was originally conceived, had gasped its last breath by the mid-1980s, a product of its particular time and place. As with rock ‘n’ roll before it, hardcore has gained a kind of respectability it never officially wanted. The city that once tried to ignore it has come to embrace, if not fetishize, the scene. There have been hardcore art exhibitions at museums and galleries, archives formed at universities, documentaries, oral histories.

Dischord is an institution today—the record label (now operating in an unmarked space beneath the 7-Eleven) and the house, a living memorial to D.C. hardcore. Inside, steep and creaky steps lead to suite of small bedrooms, filled with meticulously stacked, organized, and labelled master copies of all Dischords’ releases; fan letters written to MacKaye in folders categorized by year; photographs of friends, shows, and bands; ledgers with hand-scrawled mail-in orders, dating back to the label’s first release; VHS tapes of shows; and a LP collection that would blow the minds of most punk fans. The low-hanging ceiling of the cramped basement is a reminder of band rehearsals of days past, as does a bass amp from the Teen Idles years, guitars from Fugazi, and a vintage skateboard allegedly still used by MacKaye.

But if any part of the house epitomizes what Dischord represents for hardcore, it’s the bungalow’s oft-photographed porch, with its peeling paint, iconic since its appearance on the cover of the classic Minor Threat album, Salad Days. Punk fans still make yearly pilgrimages to this porch, surreptitiously sneaking through the front gate to snap a photo for their band’s webpage, their Instagram page, a punk Reddit thread, a Bernie Sanders meme, a hashtag. They go because the Dischord house still personifies all that is D.C. hardcore: a physical structure that literally housed the youth that played and listened to this music, but also a revolution.