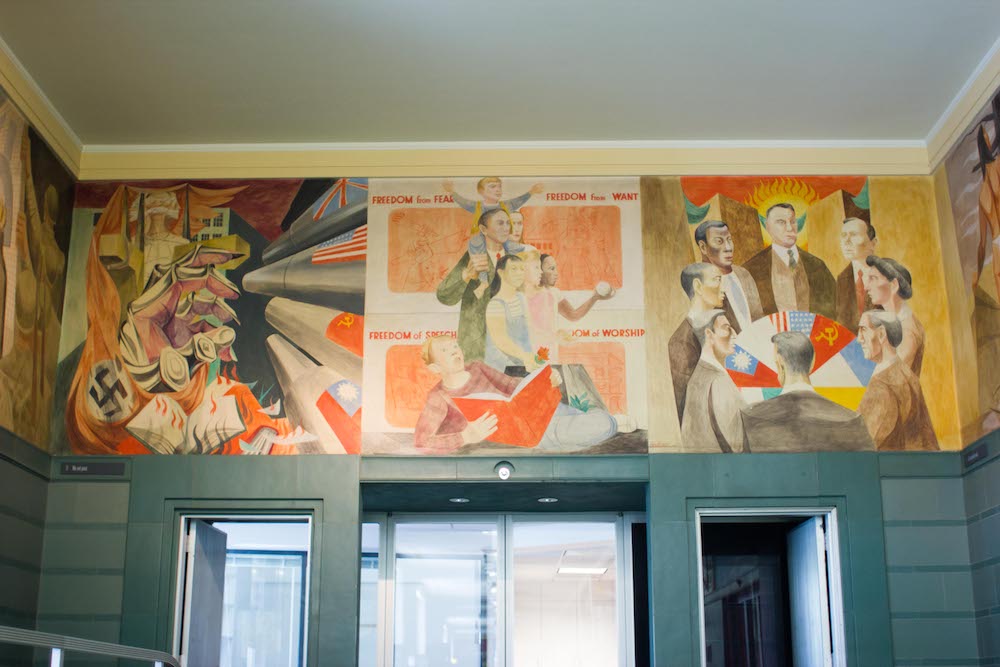 The triptych depicts "the healing of old wounds through international cooperation and the price of not doing so." Courtesy of Victorgrigas/Wikimedia.

As multiple crises pile atop one another in the young 21st century, a tripartite mural at a former San Francisco post office lobby rebukes us with its dated optimism.

“War and Peace,” by the artist Anton Refregier, is a reminder of what might have been had the U.S.—and the world—learned enough from two catastrophic wars and the rise of fascism between them to have chosen a different path. When Refregier painted it 75 years ago at one end of the Rincon Annex post office building in downtown San Francisco, the mural expressed the then-widespread hope for a future that didn’t happen.

In 1940, Refregier, a resident of Woodstock, New York, won a prestigious juried competition to paint 27 murals for the post office lobby. His award was one of the largest commissions sponsored by the Treasury Section of Fine Arts, a New Deal initiative to embellish federal buildings with work by leading American artists. It also was one of its most provocative commissions, because the mural cycle Refregier envisioned would represent the full, messy history of San Francisco, including its racial and class divisions—subjects rarely, if ever, seen on post office walls.

World War II postponed the project, and in 1943, Congress terminated the Treasury Section and transferred his commission to the new Public Buildings Administration. Refregier mourned the loss for himself and for the nation; he said that the Treasury Section’s commissions “would have eventually developed into a monumental art of world significance,” like Mexico’s murals, had it not been killed.

As multiple crises pile atop one another in the young 21st century, a tripartite mural at a former San Francisco post office lobby rebukes us with its dated optimism.

In spring 1945, Fortune magazine sent Refregier to San Francisco to make drawings of the United Nations Conference on International Organizations. The gathering was designed to abort another world war, or worse.

Just two weeks before the meeting’s opening, a cerebral hemorrhage felled the man who’d conceived the United Nations. The conference delegates mourned Franklin Roosevelt’s absence at the opening, and a month later, they met in an ancient grove of redwoods at Muir Woods National Monument to dedicate a plaque that named him “the chief architect of the United Nations and Apostle of Lasting Peace for All Mankind.”

Roosevelt’s death and the political jockeying Refregier witnessed at the U.N. conference inspired him to create “a magnificent climax” to a mural cycle showing a city largely built on conflict. While keeping most of his original plan for the mural, he scrapped his design for the final piece (a panoramic painting of the San Francisco world’s fair of 1939) and replaced it with a triptych—a three-paneled picture—depicting the healing of old wounds through international cooperation and the price of not doing so.

In the left panel, an immense armored hand rises from a pile of burning books, a swastika flag, and concentration camp prisoners to confront the massed guns of the Allies. In the right panel, people of all races gather round a circular table covered with the flags of many nations, the sun of a new day rising behind them.

Refregier sought to bridge the two antithetical pictures with a portrait of Roosevelt in the center. He was inspired by a photo of the ailing president on his return from a hazardous wartime trip to meet Churchill and Stalin at Yalta. Roosevelt’s face, the artist said, was that of a “tired, sensitive, and completely beautiful” man who “lives in the heart and the minds of the people” and thus “belongs to the history of this city.” He would dedicate the entire cycle to the memory of the late president.

Refregier returned to San Francisco in June, 1946 to paint the lobby, but he quickly fell afoul of unsympathetic bureaucrats in the Public Buildings Administration. His new superiors in Washington ordered him to remove Roosevelt, telling him that the image of a recently deceased president was inappropriate for a federal building. With the support of intellectuals, unions, and other artists, Refregier resisted for seven months, but he ultimately capitulated to what he saw as the forces that were even then launching the Cold War.

“It was necessary,” he said, “to erase the image of Roosevelt and his plans for coexistence, peace, and hope of friendship with the Soviet Union in order to see the American people on to the Cold War.”

Courtesy of The Jon B. Lovelace Collection of California Photographs in Carol M. Highsmith’s America Project, Library of Congress, Prints and Photographs Division.

The artist replaced Roosevelt’s face with a multiracial group looking to the United Nations for a fulfillment of the “four freedoms” that the president had named in his 1941 State of the Union address. In addition to the freedoms of speech and religion, Roosevelt had insisted that two more freedoms—from fear and from want—should become global human rights. Four golden pillars stood on the Opera House stage during the U.N. conference to represent those freedoms.

But the world was not to be freed of fear or want. As Refregier foresaw, the Cold War erased the hopes Roosevelt had inspired for peace and economic freedom, while the McCarthy era brought purges against those who shared Roosevelt’s vision. Led by nationalist organizations and the Hearst press, efforts to censor or destroy Refregier’s murals began even as he was painting them. In 1949, Representative Richard Nixon responded to a concerned American Legionnaire, “I believe a committee should make a thorough investigation of this type of art in government buildings with the view to obtaining the removal of all that is found to be inconsistent with American ideals and principles.” Three years later and just a few months into Nixon’s vice presidency, the House Committee on Public Works met in Washington to consider the destruction of Refregier’s murals.

With strong support from the San Francisco Establishment and beyond, the murals survived but the post office did not. In 1979, the building was redeveloped as a multi-use complex. Its current owners maintain the extant lobby as a public space listed on the National Register of Historic Places.

Today, just steps from where the nations of the world once met to sign the U.N. Charter, a growing legion of the homeless, hungry, and sick shuffle city streets below opulent towers. They testify to how very far San Francisco, the nation, and the world have veered from Roosevelt’s freedom from want and freedom from fear.

At a time when collective global action is needed to address climate chaos, pandemic disease, nuclear weapons, and resurgent fascism, few today look to the U.N. as the congress of nations Roosevelt and Refregier hoped it would become.

Like Roosevelt’s face, the purpose for which it was created has been erased.