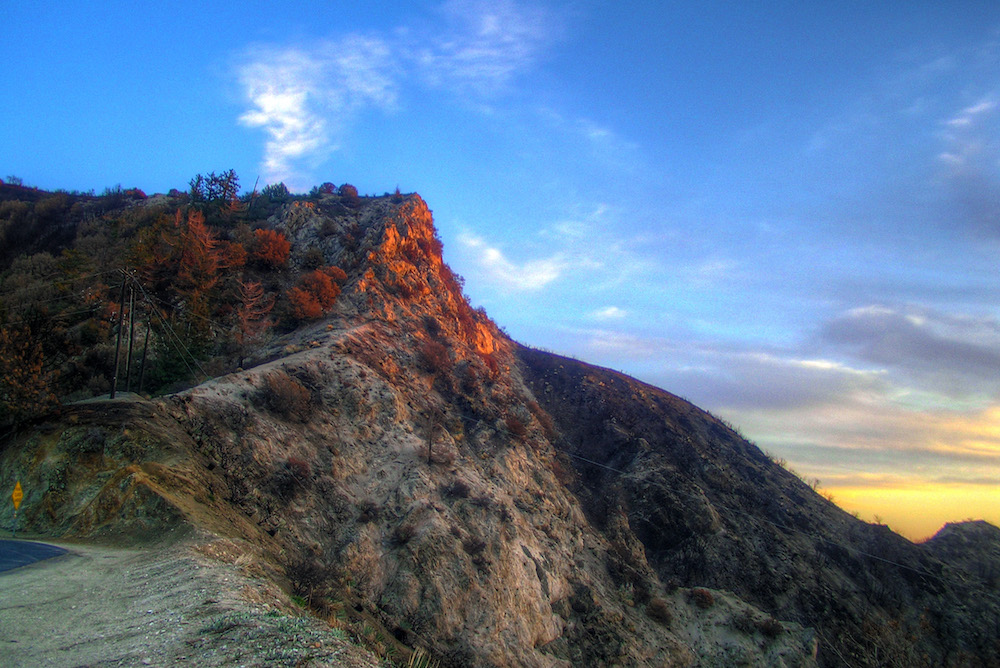 The last rays of sun from the top of Angeles Crest Highway. Charlie Essers/Flickr CC by 2.0

The Angeles Crest Highway winds thousands of feet above the Los Angeles basin, a meandering, beautiful, and dangerous road that leads to the hiking trails of the Angeles National Forest and historic treasures like the Mount Wilson Observatory and Newcomb’s Ranch (the rustic 1939 roadhouse built on the road’s only privately own land). With its western terminus not far from the La Cañada-Flintridge Target, that puts it just 20 minutes from the heart of downtown L.A., making it, arguably, the most accessible scenic byway in Southern California.

When it’s open, that is. 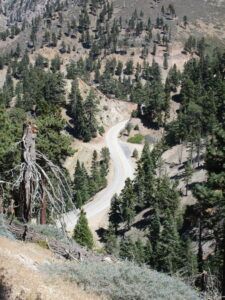 A view of Angeles Crest Highway. Photo by Laura Randall.

The California Department of Transportation shut down a prominent stretch of State Route 2, as it is also known, for three weeks this September after the U.S. Forest Service closed all California national forests due to high wildfire risk. The Bobcat Fire, which threatened Mount Wilson and blanketed the city with hazardous air, kept part of the road closed for months in 2020. In the 20 years I have been traversing it, the road has also seen its share of fatal accidents, massive rock slides, heavy snow drifts, and flooding.

So, at this point, I know to be patient and trust that Angeles Crest will eventually reopen again like always and let me and everyone else who cherishes it back in to revel in its views, coast around its curves and switchbacks, and witness the slow recovery of its fire-scarred landscape.

I came to a better understanding of the road a few years ago, when I section-hiked the Southern California portion of the Pacific Crest Trail. The PCT, as the 2,650-mile Mexico-to-Canada trail is known, crosses Angeles Crest Highway seven times before veering northeast toward the desert climes of Agua Dulce and the Antelope Valley.

During spring thru-hiking season, when thousands of Canada-or-bust hikers hit the trail, it is not unusual to encounter dusty backpackers emerging next to the highway like deer in headlights and flagging down a car to take them to civilization for food or emergency supplies. Nonetheless, many of them view this part of the PCT, known as Section D, as a necessary evil to slog through. Water and amenities, like cell-phone service, are scarce, and it also features a miserably exposed and steep detour—or alternatively, a dangerous road-walk—around the habitat of the endangered mountain yellow-legged frog.

I got to know every hairpin turn, every pullout, and the exact point where the temperature starts to drop and brittle chaparral gives way to pine and fir forests before the two-lane highway ends outside Wrightwood.

But for local day hikers like myself, this is one of the most accessible portions of the entire PCT. From my home in Altadena, I could be on the trail by 7 a.m. with a 3-liter hydration bladder and backpack full of chia bars, hike 15 to 20 miles, and make it home not long after sundown. On some hikes, like the one between Cloudburst Summit and Three Points, there was no one on the trail but me to admire pine cones the size of baby’s heads. On others, like Vincent Gap to Mount Baden-Powell, I couldn’t round a corner without running into Meetup groups and peak baggers who never met a viewpoint they didn’t think was worth a selfie. 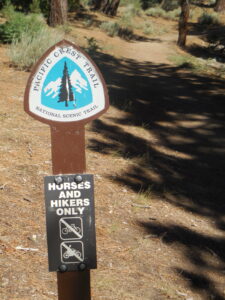 A Pacific Crest Trail marker not too far from the road. Photo by Laura Randall.

Hiking the PCT in sections can be as rewarding as making it all the way to Canada—with much less worrying about the weather. I tackled a typically hot and dry hike into the western arm of the Mojave Desert on cool January weekends, then backtracked to the San Gabriel Mountains on summer weekends, when temperatures there were at least 10 degrees cooler than the L.A. Basin.

On those summer weekends, my early-morning drives on Angeles Crest lifted me high above the fog that still blanketed the metropolis. I got to know every hairpin turn, every pullout, and the exact point where the temperature starts to drop and brittle chaparral gives way to pine and fir forests before the two-lane highway ends outside Wrightwood.

Speeding-related collisions involving both cars and motorcycles are common year-round thanks to the highway’s steep grades and narrow shoulders. I got better at navigating the curves over time, but I still veer into a pullout anytime a Porsche or motorcycle comes up fast behind me. Seeing roadside shrines in the days and weeks following an especially bad accident, I often slowed down and wondered what exactly happened—did the car crash into a tree or jump a berm and plunge into the canyon below? 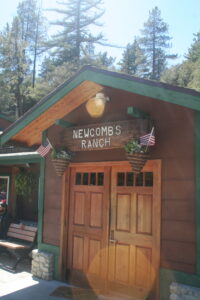 The front door of Newcomb’s Ranch, the roadhouse on the Angeles Crest Highway built in 1939. Photo by Laura Randall.

On the drive back—as long as it was a Friday, Saturday, or Sunday—I sometimes stopped at Newcomb’s Ranch to fuel up on iced tea and zucchini fries and use the Wi-Fi. There were always scads of motorcycles in the lot and people snapping photos of the vintage sign out front, but I usually managed to find a seat on the shaded patio or at the long bar. My time at Newcomb’s Ranch always helped ease the transition back to city life after hours spent cocooned in silence and one-foot-in-front-of-the-other concentration.

The roadhouse opened in 1939, 10 years after construction of Angeles Crest started and 17 years before it completed in 1956. As the story goes, Louie Newcomb, a trailblazer and early forest ranger, sold the land to his cousin Lynn Newcomb Sr. after concluding that construction of the highway was ruining his beloved high country. Over the years, Newcomb’s has lived through various incarnations, including hotel, general store, gas station, and brothel (or so the web site implies). A fire destroyed much of the original structure in 1976, but the building was rebuilt and eventually opened as a restaurant by Lynn’s son.

Fred Rundall, a La Cañada-Flintridge oncologist who bought the restaurant in 2001, often threatened to close it as rockslides, wildfires, heavy rains, and septic emergencies took a toll on his weekend-only business, but only after his death in 2019 did his family act on his threat. The 10-acre property was put up for sale this June, after a 15-month closure due to the pandemic. The real estate posting touts the landmark property as a potential “boutique hotel or glamping destination.” It doesn’t mention the property’s dependence on a single road that closes at the fickle, nature-driven blink of an eye.

Maybe it would be better if no one bought Newcomb’s—or if it took years to find an owner who would treat it with the same kind of don’t-mess-with-a-good-thing respect as Rundall and the Newcombs.

Then again, perhaps it’s best to let Angeles Crest and its surroundings take regular breaks from human activity and the spoliation that goes with it. Let the parking lots and trash cans stay empty for a while; let the trees resprout and the bears and frogs have the creeks to themselves. Louie Newcomb had a point way back in 1939 when he said the highway “ruined” the area.

My time away from the road only tends to strengthen my awareness and understanding of its fragility and flaws, and to make me realize anew how lucky we are to have it in our backyard.