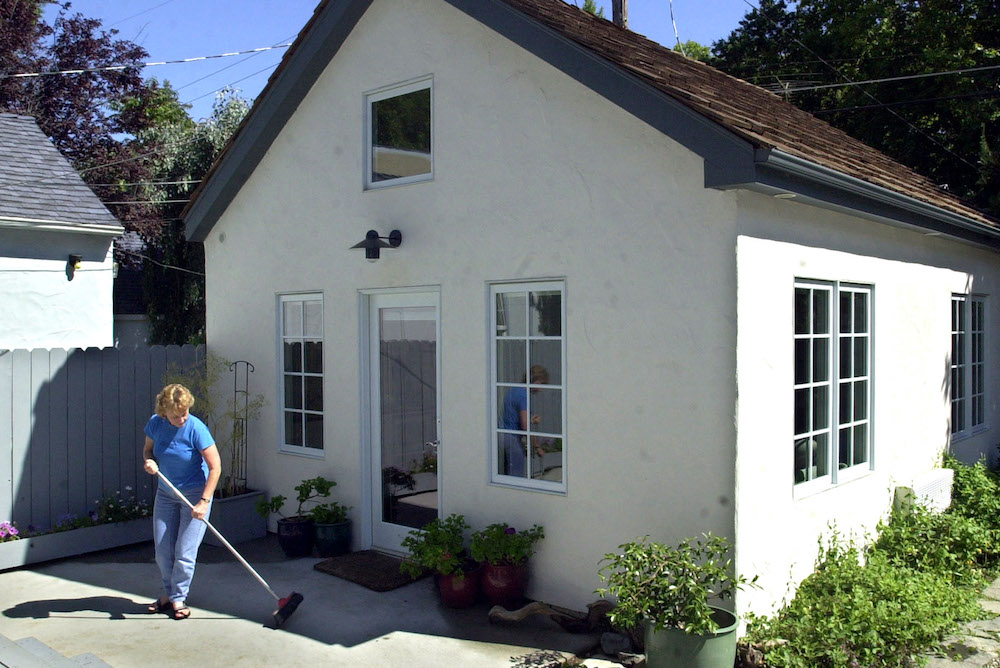 A woman sweeps up in front of her "granny flat" located in the backyard of her Sacramento, California, home. (AP Photo/Rich Pedroncelli)

A snarky reader, annoyed at some praise of California’s governor in this space, recently asked: Where exactly do I keep my shrine to Gavin Newsom?

My answer: In the same place everyone should—the backyard.

My little shrine’s location honors one of contemporary California’s crazier contradictions. Even as state government regulates more and more of our lives and livelihoods—even the straws through which we drink—it has embraced a historic deregulation of the spaces behind our homes. And even as Newsom has intruded more deeply into daily realities than any previous governor, he has become, improbably, the great liberator of our lots.

That’s the man-bites-dog context behind the governor’s recent signing of a package of bills including SB 9, the California Housing Opportunity and More Efficiency (HOME) Act. By allowing most homeowners to build a second home in their backyard, or turn their lot into a duplex, the HOME Act may spell the end of single-family zoning in California.

SB 9’s approval comes on top of 2019 legislation that Newsom signed to give homeowners more freedom to build accessory dwelling units (ADUs), or granny flats, in their backyards, and in place of garages.

What explains the transformation of our ruling San Francisco technocrat into our very own Backyard Bolívar?

The short answer is that the horrors of the housing crisis, with ever-escalating real estate prices and a resulting surge in homelessness, has overwhelmed longstanding opposition to housing from environmentalists and NIMBY groups. Building backyard housing is cheaper than other forms of affordable housing (construction for an ADU often runs between $100,000 and $150,000, versus more than $400,000 for a new affordable unit in an apartment building in urban California). And because homeowners rather than taxpayers bear the building costs, it’s an attractive way to create desperately needed units.

The longer answer is about the special power of the backyard in the California imagination.

The idea of a patio or backyard space for living has its roots in our Spanish past, and the haciendas that included shaded outdoor spaces to keep interiors cool. The California backyard also owes a debt to the 20th-century designer Cliff May, who is considered the father of ranch house. The California dream became associated with homes that linked the indoors and the outdoors, creating patio, pool, and backyard spaces where we spend most of our time.

There was an irony in California’s rapid adoption of this mode of living. Local governments approved the building of these homes with large outdoor spaces—but limited what you could build in those spaces. Guest houses, granny flats, and additions were often banned, particularly on smaller lots. The stated justifications for such limits often involved parking and traffic; the unstated justifications were to keep out the sort of people—poorer or non-white—who might be more likely to rent your guest house.

Today’s backyard liberation sweeps aside those restrictions on building. This particular mode of deregulation has won some progressive support because it uses private space to a solve a public problem—our lack of housing.

Even as state government regulates more and more of our lives and livelihoods—even the straws through which we drink—it has embraced a historic deregulation of the spaces behind our homes.

But in this shift lies a new irony: freeing homeowners to build in their backyards also threatens the very existence of the backyard. If people seize this opportunity to build out back, it could change California’s culture and landscape forever.

To the bad, some of our pool parties and barbecues will become things of the past. To the good, it’s healthier and safer for elderly Californians to live out their days in granny flats in their kids’ suburban backyards than in exurban cabins in the path of wildfires. Plus, denser living can be more energy-efficient, and fewer backyards means less outdoor watering.

More important, an embrace of backyard building could produce more housing. If one out of eight California homeowners used their new backyard freedom, we’d have more than 1 million additional housing units. But this new housing won’t necessarily make our divided state more equal.

Backyard freedom benefits those of us lucky enough to have backyards. It makes our single-family homes more valuable, since we now have the right to build more. And it’s already creating more opportunities for builders and fledgling modular home companies. But it also provides openings for financial institutions (and even internet companies) to buy up large groups of homes, add units they can lease, and gain even more control over the state’s rental market.

As a homeowner, I’m one of the potential winners. But I don’t have the cash to build my own ADU, and there are as yet no common financing instruments for such projects. When I called the out-of-state firm that holds my mortgage to ask about how to do an ADU, they had no idea what I was talking about. And even if I could borrow the money, I don’t have the time or skills to manage such a project. Surveys suggest most California homeowners can’t or won’t build an ADU.

But it sure would be nice to have rental income to help with the mortgage, especially since journalism is a less than sturdy profession. And an ADU might save money if it could become a home for my elderly parents or disabled relatives.

For now, I mostly enjoy looking at my small backyard and imagining what I might build some day, if I ever got my act together.

I also like how backyard freedom has put my own small city in its place. A few years ago, a city planning staffer responded with suspicion and hostility when I asked if I could replace my decrepit garage with a shed or small house. But, just last week, the city sent homeowners a letter offering to legalize any previously unpermitted guest houses or additions, and providing a link to the virtual planning desk for anyone with backyard building ambitions.

So, yes, I’m not ashamed to say that I put together a small shrine to the governor in my backyard—and not just because the neighbors can’t see it there. It has a couple of photos from his 2019 signing of the ADU bills, the text of SB 9, and a copy of his jargon-filled 2014 book, Citizenville.

Now I’d like to add a small bust of the governor (though those are harder to find than a cheap California house) and some candles (the battery-operated kind, of course), which I’d happily light in gratitude to Newsom and the rest of our backyard gods.