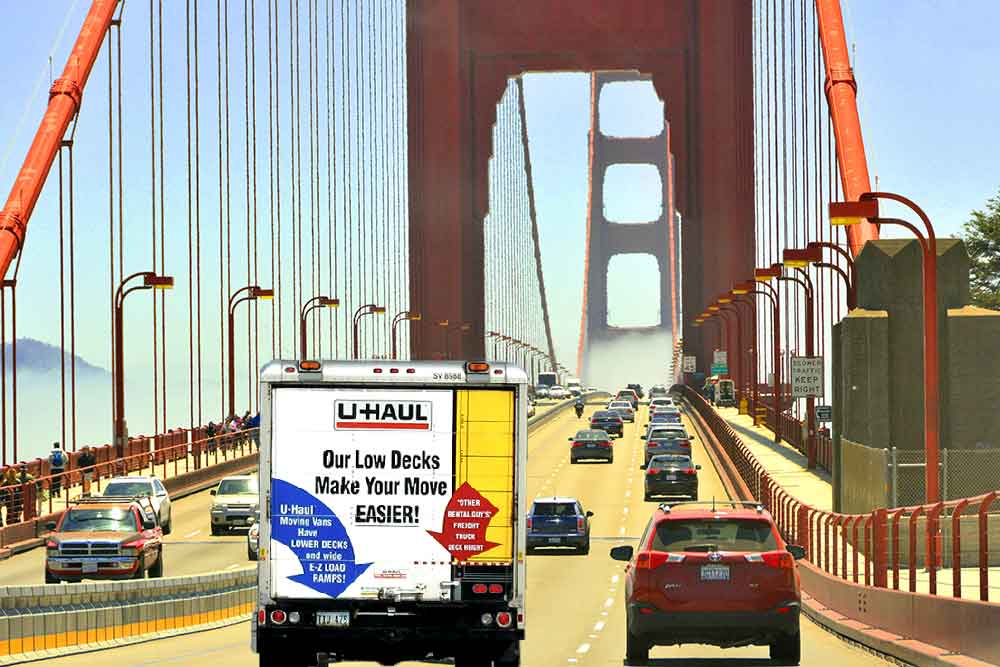 Mobility, and the vacancies created when people move, are essential to a functional housing market. Photos courtesy of Mike McBey and Karen Flickr CC BY-NC-ND 2.0.

Are you a Californian who wants to make your state a better place?

Any place within California will do, though it would be great if you could relocate to a city or county near yours. Or, even better, stay in your own neighborhood and make the leap to a different apartment or house nearby.

Why am I asking you to go through the hassle of boxing and unboxing, and the emotional challenges of leaving one place for another? Because moving serves both private and public purposes. It often improves your circumstances—finding a place that better fits your needs, or helping you take advantage of a job or educational opportunity. And a state full of people in better circumstances is a better state.

California needs you to move now because our state, which once prided itself on perpetual motion, is stuck in neutral. Californians have never been less mobile than they are right now. In the near term, our increasing tendency to stay in place means our housing market is gridlocked, with too few vacancies. In the long term, our stasis may leave us in a disadvantaged position as our climate, our economies, and our demographics shift.

Our current lack of mobility is a failure of both government and culture. As a matter of policy, California actually discourages moving.

Californians and their representatives have long clung to a tax system based on Proposition 13, which discourages owners of homes and businesses from selling by keeping their taxes relatively lower the longer they hold onto their properties. Meanwhile, state and local governments decry an exodus of people and jobs—and in response, routinely waste millions in subsidies to rich California enterprises, including Hollywood production companies and Silicon Valley start-ups.

California needs you to move now because our state, which once prided itself on perpetual motion, is stuck in neutral.

But the premise is all wrong. As the indispensable Orange County Register columnist Jonathan Lansner tirelessly points out, we Californians have the lowest outflow rate of residents of any American state—which means a lower percentage of population moves out than anywhere else. California’s real problem is that it’s the worst state at attracting new residents.

You might say our democracy has become a stay-ocracy, with our leaders relentlessly devoted to keeping people right where they are.

California progressives often oppose actual progress because of their desire to help Californians stay where they are. Housing and community activists routinely protest against badly needed new housing because it might replace existing residents. Momentum is building across the state for new rent controls or anti-eviction policies that privilege existing renters over those still looking for places to live. And then there’s the latest extension of let-them-stay logic: some Californians argue that shutting down dangerous homeless encampments, and coaxing camp residents into more stable housing, constitutes a “war on the poor.”

California’s many protections for existing residents may be well-intentioned, but they come at a high price, and not just in property tax discounts to elderly homeowners. California’s tendency to address its problems by keeping people in their existing housing actually makes the housing shortage worse.

Why? Because fewer people moving creates gridlock, according to a recent paper from USC scholars.

Mobility, and the vacancies created when people move, are essential to a functional housing market. Each move creates a chain of vacancies, which allows other people to move and find housing. For example, an older person who moves to a retirement community puts their house up for sale, which people who had been renters buy, leaving their previous apartment open for another renter—and so on.

This churn is far more important to mobility than new construction. The USC study estimates that over the course of a year, turnover of existing housing stock supplies more than 14 times as many vacancies, with the opportunity for a move, as those derived from new construction.

Vacancies are at a premium in California and across the country. Back in 1985, one in five families moved each year. But now fewer than one in 10 do. And over the past decade, mobility has slowed to a crawl at the local level—meaning that far fewer people move within their own neighborhood or city.

There are many reasons why people are staying put. Housing construction came to a standstill during the Great Recession, creating a shortage just as large numbers of young adult Millennials entered the housing market. With more people chasing fewer homes, vacancies plunged and have stayed low, while rents and home prices keep rising. Those people who want to move often can’t find anything affordable, or anything at all—so they just don’t move.

One obvious answer to this predicament is to build much more housing, which the state is starting to encourage. But it will take many years to make up for the shortage. In the meantime, California should stop subsidizing people to remain in their homes and instead devote more energy and money to making it possible for more Californians to move.

That means ending the tax discounts and other subsidies that keep older people in homes that they no longer need. (It also means building more housing for seniors who are departing their home.) Let’s take the state’s surplus funds and money saved from ending Prop 13 protections, and use it to help more people move from renters to buyers, with low-interest loans and down payment assistance. Let’s also subsidize both the rent and moving costs of lower-income people so they have more housing options.

Such subsidies should be exclusively for current Californians. (If someone moves in from out of state, they don’t create a vacancy chain here). Subsidies should also be more generous for people moving within their own city and county, because such local moves produce longer vacancy chains.

Creating a system that encourages more Californians to move could have benefits far beyond today’s housing needs.

In his new book, Move: The Forces Uprooting Us, the international relations expert and FutureMap director Parag Khanna foresees a future where moves aren’t a choice but a necessity. Khanna argues that, as climate change, political upheaval, economic crises and technological disruptions challenge existing communities and structures, we all may need to move to more livable places. That will require governments to have “collective resettlement strategies” for the world population.

“We can no longer afford to be passive observers of how human geography unfolds,” writes Khanna, adding that we shouldn’t allow ourselves to be stuck in place anymore. After all, “a staggering share of our personal and professional lives hinges on mobility. Society only functions normally if we can move. Once you stop pedaling a bicycle, it quickly falls over. Our civilization is that bicycle.”