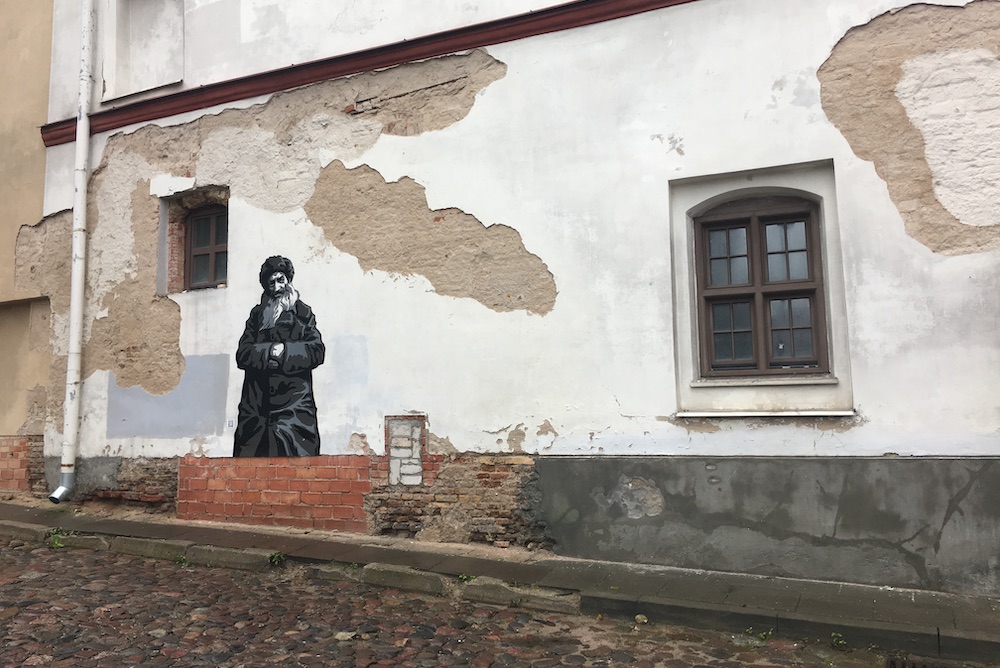 In the former Jewish ghetto of Vilnius. Courtesy of David Nasaw.

I did it all backward. Instead of taking my research trips before writing my book, like any normal historian would have, I’d waited. Only after I had completed my first draft did I finally make my way to Vilna (now Vilnius), the capital of Lithuania during its brief moment of independence in the interwar period.

In June 1941, when German troops overran the country, Vilna was home to 55,000 Jewish residents and 12,000–15,000 refugees from German-occupied Poland. Yad Vashem in Jerusalem, the spiritual and academic center of Holocaust remembrance, described Vilna before the Nazis arrived as “the spiritual centre of Eastern European Jewry, the centre of enlightenment and Jewish political life, of Jewish creativity and the experience of daily Jewish life, a community bursting with cultural and religious life, movements and parties, educational institutions, libraries and theatres; a community of rabbis and gifted Talmudic scholars, intellectuals, poets, authors, artists, craftspeople and educators.”

The Nazis, with the help of some Lithuanians, destroyed all that. In September 1941, they imprisoned the Jews of Vilna in two separate ghettoes.

The smaller, filled with Jews deemed incapable of work, was liquidated after six weeks, with 10,000 of its residents massacred at Ponary, a forest just outside the city. The 30,000 Jews imprisoned in the larger ghetto were kept alive, barely, and sent off to work in nearby labor camps until September 1943, when the second ghetto was closed. Some 8,000 ghetto residents too ill to work any longer were sent to be shot at Ponary or to the Sobibor death camp to be gassed; a few thousand of the stronger men and boys were transported to suffer and be worked to death in Estonian labor and concentration camps; the strongest of the women and girls were sent to labor camps in Latvia.

What happened in Vilna was just a microcosm of atrocities committed throughout Lithuania. By the war’s end, 90 percent of the country’s pre-war Jewish population of a quarter million had been murdered. While it was the Germans who pulled the triggers, they were aided and abetted at every step by local Lithuanians, who sought out the Jews or gave names and addresses to the Germans, who invaded their homes, stole their property, and marched the Jews to the killing fields where they would be shot, and who stayed behind to bury them in mass graves.

In traveling to Lithuania, I had hoped to find that, as in Rome, the past remained present in some way; that I would be able to experience it in its absence, soak in what had once been there and now survived in the ruins and the memorials. But the Vilna and Lithuania that I wanted to visit was no more. It had been cleared of its Jewish population. There were no Jews left in Butrimonys, the small village where my maternal grandmother’s family had come from, and only a few thousand in all of Lithuania.

Vilna had been replaced by Vilnius, which, now, in the third decade of the 21st century, had branded itself as one of the most attractive, tourist-friendly cities in Europe, with wondrous shopping opportunities, magnificent parks, a picturesque old city, world-class hotels and restaurants, and a thriving night life.

On my arrival and for the next several days, I wandered and was escorted through Vilnius and its outskirts in search of Vilna and some vestige of the Jews who had once lived there. I walked the broad pedestrian-friendly streets of the Vilnius Old Town, where I was staying, past small shops overstuffed with antiques, designer clothing, handicrafts, linens, books, and amber jewelry. Outside the Old Town, I visited the beautifully designed and overflowing malls and markets and fashion houses. And all the time, I thought about how this city had once been a center of Jewish life and learning, all of it now vanished—105 synagogues and prayer houses, six daily newspapers, and dozens of active, thriving theaters, libraries, museums, hospitals, schools, universities, institutes, and publishing houses.

I had expected that the keynote of my visit to Vilna and Butrimonys, and Lithuania, then Latvia, would be an inescapable mourning. But I quickly learned how difficult, if not impossible, it is to mourn an absence.

On my final day in Vilnius, I visited Ponary just outside the city, where, according to historian Timothy Snyder, 72,000 Jews had been shot, buried, and then, at the end of the war as the Soviets approached, had their corpses dug up by the Nazis and their local helpers and burned so that no trace of the atrocities committed there would remain. The scene I took in in 2019 was bucolic, with tamed forests, well-marked paths, and memorials along the way. One had to struggle with one’s imagination to link together the memorials to the dead with the still green, verdant parkland.

Having spent five years trying to distance myself from the horrors of the Holocaust in eastern Europe so that I could write my book and lead my life, I was now standing where the atrocities I had read and written about occurred. I had expected that the keynote of my visit to Vilna and Butrimonys, and Lithuania, then Latvia, would be an inescapable mourning. But I quickly learned how difficult, if not impossible, it is to mourn an absence.

I found myself grieving not only for those who had died in the past, but for the Jewish activists and educators who had done all they humanly could to resurrect the community that had been destroyed. At war’s end, a few thousand Lithuanian Jews who had escaped and survived the Holocaust—in the Soviet Union or in hiding, or who had fought as partisans in the forests—returned to Vilna. But their attempts to rebuild a Jewish community were thwarted by the Soviets, who feared any expression of ethnic pride or nationalism, other than reverence for the Soviet state and the Communist Party.

The Germans had murdered the Jewish people. The Soviets, through the 1950s and for the two decades that followed, engaged in another form of genocide, removing any remnant of the built community. Schools and shuls and libraries and theaters were destroyed or repurposed; the gravestones in the Jewish cemetery were removed, pounded into fragments, then used as building materials in the new brutalized, Sovietized streets and buildings.

By the early 1970s, increased Jewish immigration from Russia and Ukraine led to the expansion of the Jewish population to almost 20,000. But these migrants found it impossible to put down roots in the city and the country where so many of the previous generations of Jews had been murdered. When the establishment of an independent Lithuanian republic in 1991 enabled the Jews to abandon the Soviet bloc, they did so. Most migrated to the United States or to Israel, where they could be part of thriving, living Jewish communities.

For those who remained in what was now an independent Lithuania, there remained a glimmer of hope that the Jewish community, after five decades of occupation by the Germans and the Soviets, had a chance to finally be reborn. But it was not to be. Non-Jewish Lithuanians were more concerned with memorializing the suffering of their people under Soviet tyranny than they were in recognizing the destruction of the Jewish community by the Germans and atoning for the participation of some Lithuanians in the genocide.

There are today roughly 3,000 Jews still in Vilnius—many of them recent arrivals with no ancestral ties to the city. Those I met and talked with on my trip still held tight to their mission to revive a living Jewish community with cultural institutions, yeshivas, day schools, shuls, but I got the sense that they knew their cause was lost.

If a thriving Jewish community was out of reach in the present, there was among the Jewish activists I met, the hope that physical markers and memorials to the past might preserve the memory of the atrocities that had been committed in the vanished prewar city, that Vilnius’s and Lithuania’s school children might be educated about this stain in their national history, and reminded that their capital city had once been the capital city of Jewish thought and culture.

The Jewish activists are proud of the progress they’ve made since 1991—and the declaration of Lithuanian independence—in integrating the history of the Shoah in Vilna into the history of Vilnius and Lithuania, proud of the memorials that have been erected in the city and at the killing fields of Ponary, proud of and seizing on every opportunity to educate rising generations about the city’s Jewish past. Still, it is an uphill battle that they and other Jewish residents in eastern Europe are fighting. The inhabitants of today’s Vilnius, the capital of Lithuania, do not want to be reminded of the sins of their fathers and mothers, or of the atrocities they witnessed or participated in. They would rather not revisit the past or, to be more accurate, they would rather revisit a sanitized past where Lithuanians were the victims of violence, not the perpetrators.

As a historian, I try to bring the past back to life because it is a vital part of our present. We live in a continuum of time—the past is with us, embedded in our present, and we must recognize it as such. But that past is difficult to locate and resurrect. It is a foreign country that we can visit, but never inhabit, never speak the language, eat the foods, worship and live and love as the departed once did. No amount of effort on our part, as historians, can bring it back to life. All we can do is struggle to re-present that past in words and images.

This is what I tried to do in writing The Last Million: Europe’s Displaced Persons from World War to Cold War. I wanted to recapture this forgotten chapter in the history of World War II, the Cold War, and the Holocaust. I wanted to instruct present generations to the reality that the suffering of the victims of war did not end with the cessation of hostilities. I wanted to show how 1 million refugees, 250,000 of them Jewish Holocaust survivors, were, after the German surrender, trapped in displaced persons camps in Germany for three to five years because their homes and homelands had been destroyed and no nation on earth would accept them for resettlement.