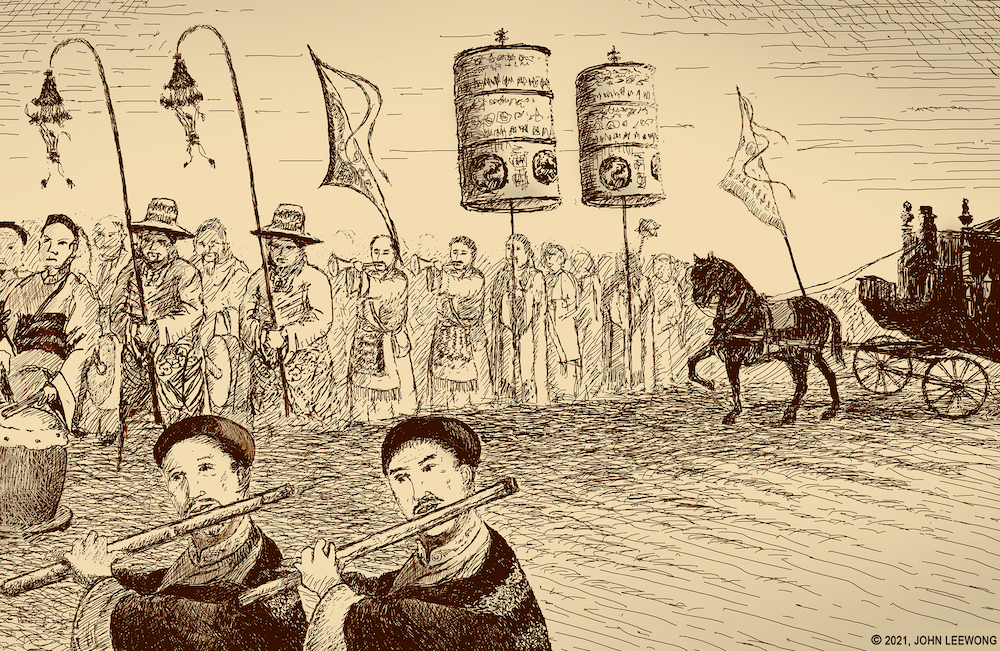 Illustration of the first Taoist funeral procession in Los Angeles, which was held in 1872 and was led by a Taoist priest from China. Processions were held every three years until 1903, for the gods to escort the victims through the seven layers of heaven. Image by John LeeWong for a new documentary, 'Buried History'.


It’s hard to tell a city’s story. In many cities, there’s a tension between pointing with pride and bowing in shame.

One of the bloodiest nights in Los Angeles history took place 150 years ago, on October 24, 1871, when at least 18 Chinese (about 10 percent of L.A.’s Chinese population at the time) were slaughtered by an angry mob of Angelenos. Why does almost no one know about it today? Why didn’t I, the first Asian American on the L.A. City Council, know this history until less than a decade ago?

Los Angeles was an unremarkable Far West town of about 5,700 residents in 1871, overshadowed by its larger and more sophisticated neighbor to the north—the Gold Rush center of San Francisco. Yet despite its small population, L.A. already had a mix of ethnic and cultural origins and influences, with Spanish and Mexican settlers, newer arrivals of European origin including French, Germans, Italians, and Irish, some African Americans, and Indigenous peoples who preceded everyone else.

In 1871, L.A. had about 172 Chinese residents, mostly single men who fled famine and social disorder in southern China in hopes of making money in mining and railroad construction jobs. The wages earned by Chinese workers—doing arduous, extremely dangerous jobs—tended to be much lower than the pay for white workers. After the mining jobs disappeared and the transcontinental railroad line was completed in 1869, Chinese workers fanned out across the West. Some ended up in Los Angeles, taking low-paying jobs as cooks, vegetable peddlers, laundrymen, or houseboys. Other Angelenos looked down on the Chinese, who were scapegoated for problems ranging from sanitation to low wages.

L.A. was considered the most lawless town west of Santa Fe. And Calle de los Negros, a one-block-long alley just north of present-day Civic Center, near Olvera Street and Union Station, was the worst part of one of the worst towns in the West. Amidst the bars, gambling and opium dens, and brothels of Calle de los Negros were the homes and businesses of L.A.’s Chinese pioneers.

In the late afternoon of October 24, 1871, a gunfight broke out on Calle de los Negros between two gunmen from rival Chinese factions, injuring a police officer and a white rancher and former bar owner. The rancher, Robert Thompson, died of his wounds. As word of the shootings and the fatality spread across the town, about 500 vigilantes converged on Calle de los Negros to seek revenge.

By the end of the night, at least 15 Chinese were hanged and three Chinese were shot to death. Chinese-owned businesses were vandalized and looted, resulting in estimated losses of $40,000 (around $1 million in 2020 dollars). Eight rioters were found guilty of manslaughter, but all the convictions were later overturned.

A few years later, the buildings around Calle de los Negros were demolished and the Calle obliterated—entirely wiped off the map. Many of the Chinese were uprooted, resettling on the other side of Alameda Street, where the community thrived for five decades until the construction of Union Station forced more relocations in the 1930s.

I was one of many Asian Americans who instinctively saw the connection between the 1871 vigilante killings and, in 2021, the continuation of attacks on Asian Americans, which rose 76 percent in L.A. County over the past 12 months alone.

While little is known about the lives of most of the massacre victims beyond their names and occupations, researchers have uncovered the story of Chee Long Tong, a Chinese doctor who treated both Chinese and non-Chinese patients and was probably one of the best-known Chinese in Los Angeles. Like all of the other lynching victims, Dr. Tong had no connection to the gunfight that triggered the massacre. But some details of his life are known, such as the location of his home and examination room (just off Calle de los Negros), his ownership of an employment brokerage business that placed Chinese in local jobs, the fact that he had a wife, and his tragic attempts to persuade the vigilantes to spare his life.

The Los Angeles massacre was a harbinger of other horrific anti-Chinese incidents in California and across the western states in the 1870s and 1880s. At least 200 California communities, including Fresno, Pasadena, and Riverside, carried out forced expulsions of the Chinese. One of the most shameful took place in 1885 in Tacoma, Washington, when a large mob forced 150–200 local Chinese to march eight miles through heavy rain to take a train out of town. Afterward, the mob torched Tacoma’s Chinatown, leaving no physical traces behind. That same year, the single most brutal anti-Chinese attack in U.S. history was triggered by white miners in Rock Springs, Wyoming, who were angry about the willingness of Chinese miners to work for lower pay. The white miners killed at least 28 Chinese, wounded 15, and subsequently looted and burned all 79 houses in Rock Springs’ Chinatown.

While Los Angeles never witnessed another massacre like the 1871 attack on the Chinese, the city’s history has been marked by eruptions of racial violence. These tend to fade from our collective memory. Many current Angelenos know something about the violence that started in South Central Los Angeles following the verdict in the Rodney King beating case in 1992, but recollections of the 1965 Watts riots are less distinct. And our memories of the 1943 Zoot Suit riots, when white sailors, soldiers, and marines attacked Mexican American and African Americans in East L.A., have faded even further.

I’m one of the Angelenos who was born and raised in L.A. and never heard a word about the 1871 massacre. My parents and grandparents were active in L.A.’s Chinatown for many years, but never said anything to my sisters and me about the history of Chinese being lynched by an angry L.A. mob. The massacre wasn’t taught in schools or mentioned in the media or history books.

L.A.’s barbaric treatment of the Chinese in 1871 was met not with official condemnations or apologies, but with muffled silence. And then forgetting. To the extent that they knew about 1871, older generations of Asian Americans may have chosen not to dwell on negative stories from the past.

The first time I ever heard about the 1871 massacre was in 2012, when I was asked to write a review of The Chinatown War by Scott Zesch, the definitive account of the tragedy. Writing the book review etched the incident into my adult consciousness. But I didn’t feel a sense of urgency until current events connected the dots between the past and the present.

Since the COVID-19 pandemic began, Chinese and other Asian Americans have begun to feel as if they are walking around with targets on their backs. The escalation of epithets like “China virus,” and the sporadic physical and verbal harassment of women and senior citizens, seemed to have reached a peak with the shootings of six women of Asian descent in Atlanta in March 2021.

Just a few weeks later, in April 2021, L.A. Mayor Eric Garcetti released a far-sighted report reviewing the city of Los Angeles’ track record recognizing both the tragic and the triumphant episodes of local history. One of the report’s recommendations called for redressing the lack of public commemoration of the 1871 massacre of the Chinese.

I was one of many Asian Americans who instinctively saw the connection between the 1871 vigilante killings and, in 2021, the continuation of attacks on Asian Americans, which rose 76 percent in L.A. County over the past 12 months alone. We resolved to seize the moment to do something about it.

In June, Mayor Garcetti’s chief design officer, Christopher Hawthorne, convened a steering committee of community representatives—which I am co-chairing—to start figuring out how to create a suitable public memorial to the 1871 massacre. A formal process will be launched to invite designers and artists to submit their ideas, and I’m looking forward to seeing what they come up with. One possible outcome our group has discussed would be an alternative to the conventional statue-on-a-pedestal approach, setting out a pathway of physical memorials along a “constellation” of massacre-related sites connecting Calle de los Negros, the lynching sites, and perhaps even symbols of mercy and reconciliation.

There may be some skeptics who assume that an 1871 memorial will appeal only to the Chinese community, or who doubt the value of rehashing sad stories from the past. The best response is to create a unique memorial that dusts off the people and the places of 1871 Los Angeles and brings them to life.

Ultimately, I hope that the memorial, like the story itself, offers shreds of hope. At least a few citizens in 1871 Los Angeles gave sanctuary to some of the Chinese fleeing the violence, sheltering them in their homes or businesses. Even at the bleakest of times, against all odds, there are people who try to do the right thing.