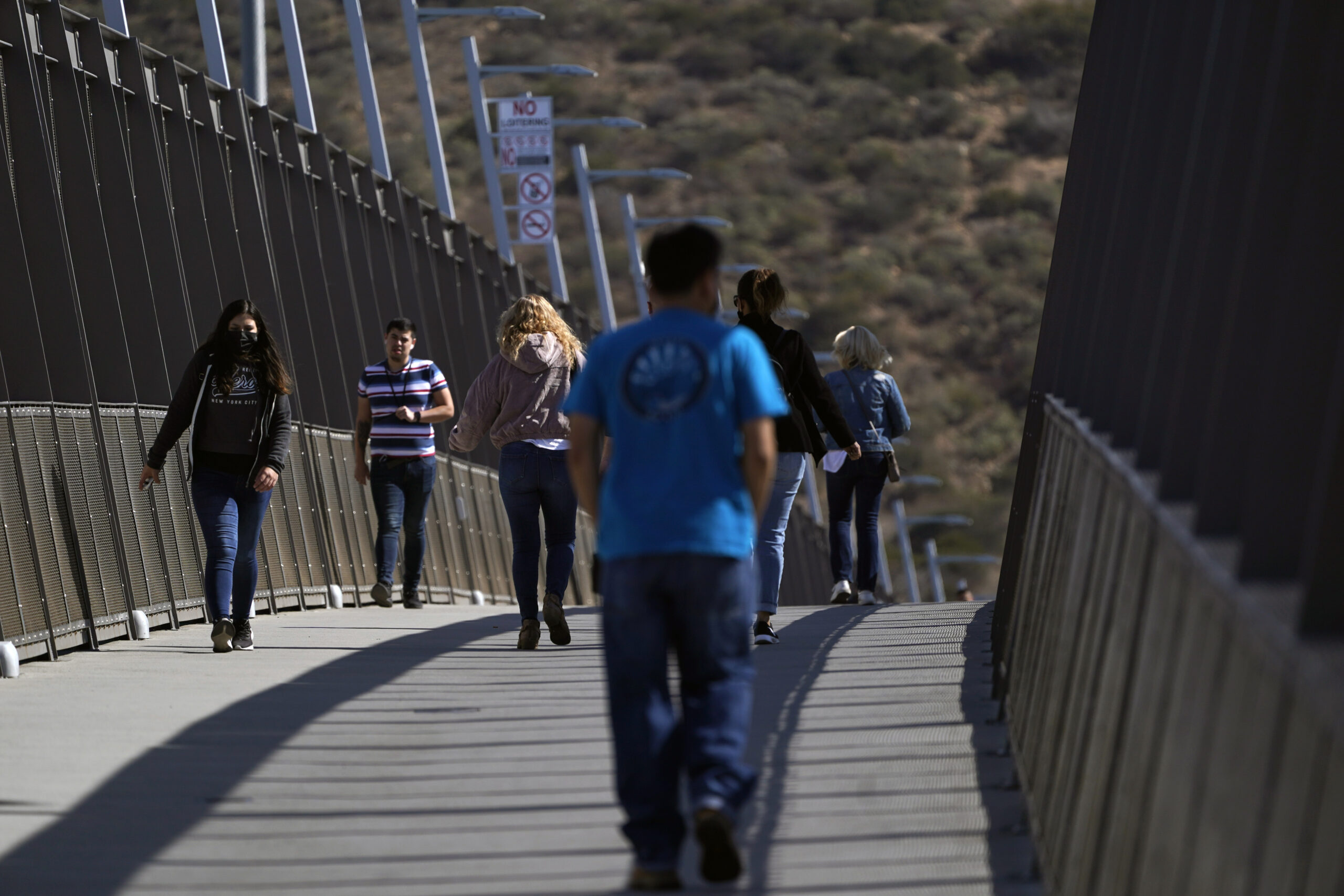 People walk on a bridge at the San Ysidro Port of Entry, the largest land border crossing between San Diego and Tijuana. AP Photo/Gregory Bull

All four of you can see that the American and Mexican governments are playing politics with the border. Both nations at the federal level refuse to govern the borderlands with the respect and responsibility that the place and its people deserve.

If you work together, you can establish a new body with the power and legitimacy to represent your constituents on both sides of the border. In the process, you could help end the sense of crisis at the border—and advance popular rule across North America and the world.

How do you do this? Let borderlands residents govern themselves, by creating a citizens’ assembly.

Citizens’ assemblies are bodies of everyday people—often chosen by lot, or randomized processes to make them representative—that gather together to study a particular place or problem. After collecting information, taking testimony, and deliberating among themselves, participants in citizens’ assemblies make recommendations to the government—or, if they have the power, adopt laws or regulations themselves.

The promise of such assemblies is that everyday citizens, who aren’t compromised by the need to win elections, have more freedom and incentive to work together and find new ways forward.

“Once you force people into a context where they have to get past the posturing and commitment to ideas, where they have to address real-life problems with people like them—even if they think differently—you solve a lot of issues,” explains Yale political scientist Hélène Landemore, author of the fascinating 2020 book, Open Democracy, about non-electoral democratic systems.

Citizens’ assemblies can be effective at addressing difficult issues that governments have failed to address, resulting in dangerous levels of social conflict. The U.S.–Mexico border, and the now generations-long political fights over who crosses it and how, certainly qualifies.

A citizens’ assembly should be divided 50-50 between residents of California and Baja living within 20 kilometers of the border. The assembly members would be selected by lot and would meet in person—in both countries—and digitally.

As you all know, the U.S. government’s failures over the past three presidential administrations are legion. There have been mass deportations, child migrant concentration camps, systematic violations of human rights and laws, and rampant abuses by unaccountable federal agencies—to name a few. As a result, the U.S. no longer qualifies as a legitimate governor of its own southern border. The Mexican government, by acquiescing to American policies and also sanctioning abuse of migrants by its own police and military, is similarly compromised.

Border residents are living with the consequences of their nations’ mismanagement of their region. They endure intrusive searches, harassment, and violence from authorities on both sides of the border; intrusions on their land and property; and sanitation, traffic, and crime problems associated with the queuing and confinement of migrants near the border. More prosaically, excessive security and bureaucracy makes it harder for residents to make the routine border crossings that are essential to living a full life in the region.

Since national politicians have so long failed your constituents on both sides of the border, it’s high time that you give the people the chance to govern the place themselves.

A citizens’ assembly should be divided 50-50 between residents of California and Baja living within 20 kilometers of the border. The assembly members would be selected by lot and would meet in person—in both countries—and digitally. There should be some representation for migrants who are temporarily, or not so temporarily, stuck at the border.

And the assembly should have real legislative and oversight power.

It’s too much to hope, given the widespread ignorance of border realities in Mexico City and Washington, D.C., that such an assembly could make federal policy. But you should work to make sure that the assemblies have subpoena power to compel testimony from federal officials, and the ability to recommend changes in federal law. All four of you might have the clout to make this happen, since you are members of the same political parties as your countries’ respective presidents.

And at the state and local levels, you should empower the citizens’ assembly to act directly.

Governors del Pilar Ávila and Newsom, you should push legislation to give this assembly lawmaking powers in border matters—subject to override by your state legislative bodies. And Mayors Gloria and Caballero, you and your councils should commit to a similar delegation for city ordinances in San Diego and Tijuana.

With such powers, an assembly might solve many thorny problems. It could devise ways to house migrants left to fend for themselves, and to protect migrants who, when stuck at the border, become easy prey for criminals. The assembly could work to make legal border crossings easier and faster, and to encourage further cross-border exchange and cooperation. And it could enact policies to protect local residents from illegal searches and seizures, especially via the highly intrusive, high-tech tracking tools both national governments use with little oversight.

All four of you are pragmatists, but your hopes and expectations for such cross-border policymaking should be high. After all, the governments of California and Baja California have long records of productive cooperation on education, environment, trade, and law enforcement. And Tijuana and San Diego have become as thick as thieves, sharing a border airport, fighting together to open more border crossings, and co-hosting events.

Indeed, the current effort by Tijuana and San Diego to be jointly designated the 2024 World Design Capital—which would allow them to host 2024’s “Olympics of Design and Innovation”—could actually be a platform to design such a citizens’ assembly.

Mayor Caballero, you certainly must remember that, in endorsing this design bid, you celebrated cooperation between ordinary people on both sides of the border and called for more of it. “Especially unique to our region are the ways that grassroots groups—networks, communities and extended families—create support systems for culture, business and public transformation,” you wrote. I also saw your inaugural address, in which you called yourself a migrant (you’re originally from Oaxaca) and promised “a new stage of political, cultural, and economic transformation.”

A citizens’ assembly would represent such transformation and make real history, but that shouldn’t scare any of the four of you. Mayor Caballero and Governor de Pilar Ávila, you are both history-makers, as the first women elected to your posts. And Mayor Gloria and Governor Newsom, you are both energetic technocrats who never stop talking about changing paradigms.

So, why not cross one more border—and give both sides a shot at self-government?