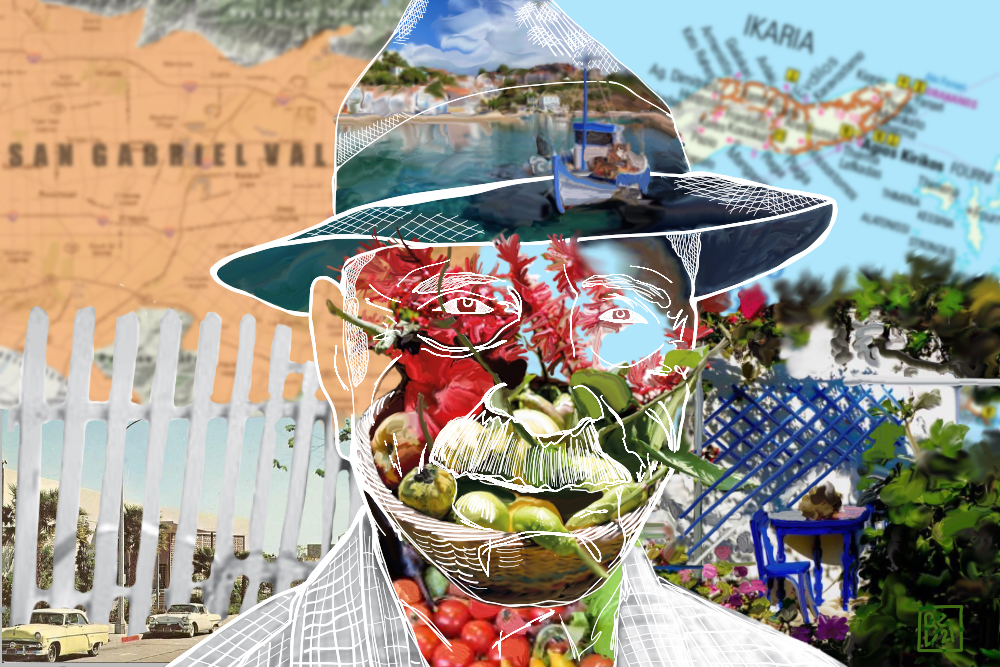 Illustration by  Be Boggs.

Ten Octobers ago, my family moved into our San Gabriel Valley home, and people started knocking on the door. Some knockers were neighbors. Some were trick-or-treaters.

And some were looking for Steve.

But I would learn, slowly, the story of the gentleman who used to live in my house. His family left no forwarding address for the mail that still arrives for him, and my attempts to reach them have not been successful. But the knockers kept coming, and the neighbors, who have never stopped talking about him, have filled in details.

Steve’s story has also taught me some larger lessons: that our homes don’t really belong to us, that there is no greater gift in this deathly world than a talent for long life, and that you should count yourself lucky to occupy a haunted house—if you’ve got the right ghost.

Stavros Koutis—whom the knockers knew as Steve—was born on January 20, 1909, on the Greek island of Ikaria, then part of the Ottoman Empire, according to an account published for his 100th birthday party.

Ikaria is named for the mythological Icarus, who famously died young, falling into the sea after he flew, with wax wings, too close to the sun. But Ikarians are famous for living longer than virtually any other population on earth. Indeed, Ikaria is one of five global “blue zones” where people live unusually long lives—routinely past 90 or 100. The other four blue zones are: Okinawa, Costa Rica’s Nicoya Peninsula, Sardinia’s mountains, and the Seventh Day Adventist community in Loma Linda, in California’s San Bernardino County.

How could any person, of any age, be so generous, know everyone, and have the health and energy to exercise vigorously in his yard?

Like so many of his fellow Ikarians, Stavros, too, would be blessed with a long life, and a health and vigor that would awe his California neighbors well into the 21st century. But his journey took him a long way from home.

In a tribute published in the magazine of the Pan-Icarian Brotherhood of America in 2011, Stavros’ daughter said that her father dreamed of becoming a schoolteacher. But poverty, family conditions, and wars (Italians and Germans occupied Ikaria during World War II, and an estimated 20 percent of the population died of starvation) kept that profession out of reach. So, starting as a teenager, Stavros made a living as a sailor, transporting coal around the Aegean.

In 1938, he married Polyxeni Tsakalia, a dressmaker from Dafni, and they had four children. To support his family, he enlisted in the Merchant Marines, traveling the world. In the early 1950s, while at a U.S. port, he jumped ship. For nearly 10 years, with his wife and children back at home, he worked in painting and construction in Chicago, Cleveland, and other cities, while dodging immigration authorities.

Eventually, the family was able to immigrate legally in 1966, after his son established U.S. residency. In 1968, the family purchased the 1,400-square-foot house where I now live for $20,500, according to county records.

Stavros became a community pillar. When he wasn’t babysitting grandchildren or traveling back to Ikaria (where he’d restored a family home), he chatted with locals on long walks to visit friends to drink Greek coffee and discuss Greek politics and Ikarian history and genealogy, subjects upon which he was an expert.

He also had the greenest of thumbs. On the small lot he created a magnificent garden of peppers, tomatoes, eggplants and other vegetables, and cared for a canopy of trees producing avocados, oranges, lemons, limes, nectarines, and persimmons. A giant South American cactus plant guarded the house’s rear, and also produced fruit. He gave some of this bounty to grateful neighbors and used the rest in his own skillful cooking.

After his wife’s death in 1997, Stavros chose to stay in his home—and he aged so gracefully that he became a local marvel and mystery. How could any person, of any age, be so generous, know everyone, and have the health and energy to exercise vigorously in his yard? After he turned 100, he was still doing sets of 1,000 repetitions on his rowing machine.

He lost some of his eyesight in his 90s, but little of his memory. After he died in 2011—eight days after his 102nd birthday—the neighborhood couldn’t quite believe it. Which is why people were asking us about Steve when we bought the place for $750,000 eight months later. And it’s also why neighbors were still talking about him at our 2019 block party.

“My father was a simple man of the sea and the earth and enjoyed both to the fullest,” his daughter wrote after his death.

Can any life be better than that?

I’ve long written about the history of other Californians’ houses, but not my own, because I didn’t really know the place. In normal times, I’m rarely home—instead, I’m traveling around the state, taking meetings at the office, or shuttling my three young sons to their activities.

But then the pandemic confined me to the house last year, and I finally managed to get to know the place. I couldn’t help but feel Stavros’ presence. His fruit trees still produce reliably, his roses bloom various colors, and the avocado tree seems to get more bountiful every year. The yard is perfect for exercising, and the front stoop remains an easy place to be social with the neighbors.

Our family is no emblem of healthy living. But we have managed to avoid getting COVID-19, at least so far. Maybe that’s just luck, or being careful to wear masks. Or maybe, somehow or somewhere, a great, Greek ghost is still watching over his place.