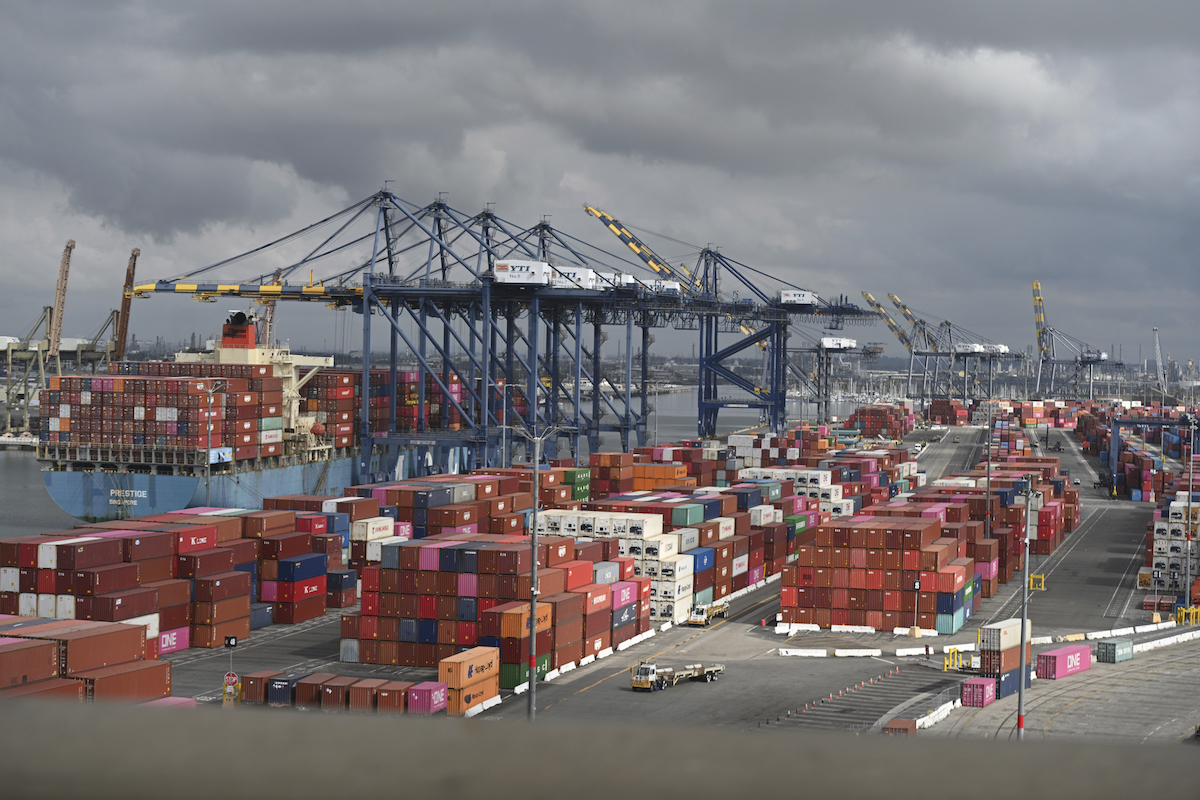 Gridlock at the Port of Los Angeles. Courtesy of AP Photo/NDZ/STAR MAX/IPx

Rescuing Christmas from the supply-chain Grinch won’t be easy. To make it happen, policymakers and business leaders need to take an expansive approach, paying attention to logistics beyond our nation’s clogged-up harbors.

Take what’s happening in Southern California: On October 19, 100 container ships were scattered along the shoreline for at least 20 miles as they waited to unload at the twin ports of Los Angeles and Long Beach.

It was an unprecedented logjam. A single ship carrying 19,100 TEU (20-foot equivalent unit) containers can haul 156 million pairs of shoes or 300 million tablet computers or 900 million cans of baked beans. What the nearly half a million containers worth of goods waiting on those ships represent is difficult to even grasp.

The backup—along with similar gum-ups in 77 percent of major ports all over the world—has piled onto ongoing concerns about holiday season shortages, with everything from semiconductors to semisweet chocolate caught up in the predicament. But these shipping delays won’t just impact whether you’ll get your new Xbox—on a larger level, U.S. officials are worried these shortages will affect consumer spending, and in turn, hinder economic recovery.

Because L.A. and Long Beach account for 40 percent of all seaborne imports to the United States, the situation at those ports caught the attention of President Joe Biden and Secretary of Transportation Pete Buttigieg, who quickly announced that both facilities would begin to operate 24 hours per day to ease the congestion.

While this was a positive step, in the long run, it only irons out one kink in a long link. Ultimately a system-wide solution is needed to fix the entire supply chain—the complex web of suppliers, purchasers, and logistics operations that shuttle products around the world, and keep global and local economies humming healthily along.

Many different causes have led us here. The pandemic changed the lifestyle of many Americans, who switched to a hybrid work schedule and started spending more time at home. That fueled surging demand for items like office chairs, printers, gym equipment, and home appliances as consumer demand shifted from service to goods.

But just as demand skyrocketed, COVID-19 related safety policies made it harder for suppliers to deliver stuff where it needed to go. Logistics experts have reported that extensive quarantine requirements and partial port closures in China, along with lockdowns at factories in Indonesia and Vietnam, significantly hampered the production of goods for the U.S. market. Some have also argued that generous pandemic unemployment benefits in the U.S. created reluctance for many Americans to return to logistics-related work, resulting in severe labor shortages among workers at the ports, truck drivers, warehouse operators, and so on.

Complicating the supply situation is the fact that containers needed to ship stuff aren’t in the places they’re needed. Shortages of containers in China have sharply limited the amount of goods that can be shipped to the U.S. Then, when loaded containers do arrive at the port, there is a shortage of chassis available for truckers to use to haul them away. The Biden administration has requested suggestions from a broad range of stakeholders to solve the country’s container and intermodal chassis shortages and alleviate supply chain chokepoints. But even when the container shortage issue is resolved, this won’t be the end of the problem, because there is a shortage of warehouse space in the U.S. for storing these deliveries. In late October, the vacancy rate in the Los Angeles area was a paltry 1 percent; even before the pandemic, in 2019, the vacancy rate was a tight 1.4 percent.

Ultimately a system-wide solution is needed to fix the entire supply chain—the complex web of suppliers, purchasers, and logistics operations that shuttle products around the world, and keep global and local economies humming healthily along.

Broken supply chains may slow economic recovery in Asia, Europe, and the United States. In the U.S. particularly, where many self-interested players are involved and the government has no direct control over most of them, it will be a challenge to get everyone on board to solve the crisis. I suggest two short-term approaches:

First, when supply cannot be increased quickly, it makes sense to curb demand—in this case, to try to entice consumers to shift their spending from goods back to services. To achieve this goal, the Biden administration should push faster and harder with vaccination mandates. Safety is a must to get Americans back traveling, dining out, and returning to movies, shows, concerts, and the gym. Once the vaccinated population reaches a critical threshold, the government can partner with service providers to provide incentives to get Americans out of these houses and back enjoying new and improved services again.

Second, many supply shortage issues are caused by a lack of coordination among participants in the supply chain—and some quick fixes can go a long way. Taking warehouse capacity: California Gov. Gavin Newsom signed an executive order on October 21 calling for state agencies to identify land for storing containers now stuck at the ports. This is a good step forward. The government should follow it up by imposing penalties on unclaimed containers, which often sit around because storage and demurrage fees at the yards are too low. As an initial step, the Los Angeles and Long Beach harbor commissions recently approved new fines for containers sitting at the port for more than nine days. The fines will begin at $100 per container, increasing by $100 per day, and provide incentives for retailers to claim containers quickly and get rid of the goods within them via fire sales. This will ensure warehouse vacancy rates increase and make room for new containers to move in and allow normal commerce to resume.

This all leads back to the ports, where container and container chassis shortages are exacerbated when loaded containers lie for days or even weeks, taking up space that needs to be freed for receiving empty containers. Likewise, without newly emptied containers leaving U.S. ports, container shortages escalate in Asia. Once more containers are claimed and emptied at different yards, port operators, trucking companies and warehouse owners will be able to coordinate operations so that truckers can drop off the empty containers and pick up loaded ones in a single trip. With operations synchronized, more containers will be cleared from the port, making rooms for arriving ships to unload.

These fast and simple solutions could help ensure that merchandise such as toys, shoes, game consoles, and holiday decorations will arrive at stores sooner—and hopefully, before the holiday season. However, even though temporary fixes may tie us over for this holiday season, we need to plan for the future. Any long-term supply chain solution must involve a thorough review of the entire physical and information infrastructure.