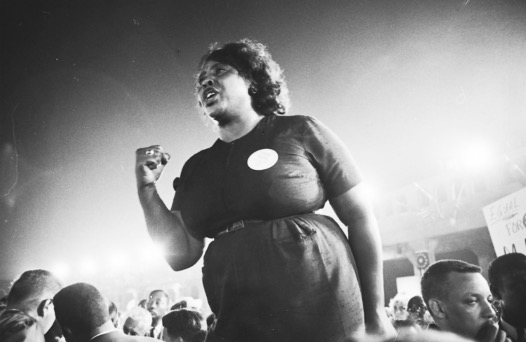 Though Black people represented 50 percent of Mississippi’s voting age population in 1964, Jim Crow literacy tests, poll taxes, violence, and intimidation had managed to all but silence their political power at the polls. Now, adding to their disenfranchisement, white Southern Democrats were proposing seating an all-white delegation at that year’s Democratic National Convention.

Fannie Lou Hamer—a poor, middle-aged, Black sharecropper—wasn’t having it. That August, she testified before a convention committee, alongside better-known civil rights activists, including Martin Luther King Jr., and demanded the right to represent the citizens of Mississippi as a party delegate.

Hamer was not the typical face of the growing movement, dominated by elite men and youthful radical activists, but a Mississippi Delta cotton picker with a sixth-grade education. She sat at a witness table, the committee chair behind her, stared down by 100 rank and file members and nearly 200 spectators and reporters. Two male colleagues had already read prepared statements, to little response from the audience; Hamer’s speech buzzed with authentic personal and emotional experience, and it stole the show. Her voice rose as she recounted virulent racism and state-sanctioned terror. She told how a white landlord, W.D. Marlow, evicted her from the land she farmed and the home she shared with her husband and daughters—simply because she tried to register to vote. She described how police beat her brutally, just for trying to teach other people how to register to vote. Hamer’s eight-minute plea ended with a haunting question: “Is this America, the land of the free and the home of the brave, where…our lives be threatened daily, because we want to live as decent human beings, in America?”

Hamer’s words resonate today, as the fight for voting rights for Black Americans and other marginalized groups continues. On November 3, Republicans blocked the John Lewis Voting Rights Act from advancing in the Senate, denying Democrats the opportunity to restore voting protections enshrined in the Voting Rights Act of 1965 and recently struck down by the Supreme Court. Then, as now, Hamer’s story reminds us that famous leaders like Dr. King do not stand alone in confronting those who remain deaf to the voices of justice and unity. Ordinary Americans, too, must step up to demand change.

Hamer fought her way up from one of the poorest and most segregated places in the country to challenge a deeply divided nation. Born in October of 1917, she was the 20th child of Jim and Ella Townsend. At the time, one in four Black children in Mississippi did not live to see their fifth birthday due to malnutrition and lack of access to medical care; most hospitals refused admittance to women of color and their families. Seven of the Townsends’ children died before Hamer’s birth.

As sharecroppers farming cotton, the family was stuck in a perpetual cycle of poverty, borrowing from their landlord to cover the costs of housing, seed, equipment, and work animals, and purchasing food, clothing, and medicine at inflated prices through the landlord-owned and operated plantation commissary. Before paying the family at settlement time in December, the landlord deducted all these accrued expenses from their commissary account. If the price of cotton was high, the Townsends were able to save a little money to survive the winter. Most years, though, their share barely covered their debts. “We would just, you know, exist. Not really live, exist,” Hamer later told an interviewer.

Hamer started picking cotton at age six. She was a bright child, but by sixth grade she’d dropped out of school to help pay the family’s expenses, which would only be pressed tighter during the Great Depression. Some of her siblings moved North, or sharecropped elsewhere. In 1939, Hamer’s father, a part-time Baptist minister who supplemented the family’s income by bootlegging, died of a stroke. By then her mother had gone blind and was completely dependent on Hamer for food and shelter. Hamer found solace in her church, where the Bible and her powerful singing voice gave her spiritual and emotional comfort. In 1944, she married Perry “Pap” Hamer, a sharecropper and mechanic on the W.D. Marlow plantation outside of Ruleville, in Sunflower County. By this time, prosperity had increased in the Mississippi Delta, but many landlords continued to cheat their sharecroppers. Around her, Hamer saw fellow African Americans linger in abject poverty, unable to vote to improve their situation.

Today America faces a new voting rights crossroads—the kind of moment Hamer, who continued to face hardship but continued her activism until her death in 1977, would find all too familiar.

Changes were starting to brew in post-World War II America. Challenges to Jim Crow laws reached the Supreme Court, including Brown v. Board of Education, which overturned the “separate but equal” doctrine that preserved racial segregation in American schools. But in places like Mississippi white supremacists pushed back. Black people who asserted their constitutional rights faced threats, economic reprisals, physical assaults, and murder.

Hamer would have been aware of all of this when, in 1961, young people involved with the Student Nonviolent Coordinating Committee (SNCC), a civil rights organization founded in April 1960, came to Mississippi to empower local people to register to vote. Hamer was living with Pap and their daughters on the Marlows’ cotton plantation when SNCC activists made it to Ruleville. Hamer knew the risks in getting involved with SNCC—violence, harassment, or worse from white neighbors—but also realized she must act. In recent months, a local white doctor had sterilized her without her consent after she sought treatment for benign uterine tumors; the procedure was so common for poor Black women that it was known as a “Mississippi appendectomy.” Unable to demand restitution or accountability from the doctor, Hamer became “sick and tired of being sick and tired.”

SNCC offered her a glimpse of what was possible—the seeds for liberation. The group represented the beginning of a “New Kingdom right here on earth,” she later remarked, and “the hope that we prayed for so many years.” With the group’s support, Hamer took the voter registration literacy test; within hours, Marlow evicted her but demanded Pap and their daughters stay to finish picking the season’s crop. Unprepared, Hamer moved from neighbor to neighbor until she found a small rental. The SNCC promptly hired her to work as a community field representative to help other people register, recognizing her natural leadership abilities and nurturing them through personal and professional training. Encouraged by SNCC and other civil rights organizations, Hamer began organizing the Mississippi Freedom Democratic Party to represent Black and marginalized Mississippians.

On June 9, 1963, Hamer and several SNCC colleagues were returning home to Mississippi after two weeks in Charleston, South Carolina, where they learned nonviolent protest and voter registration techniques. During a layover at a bus terminal in Winona, Mississippi, police arrested them for trying to integrate the terminal restaurant and washrooms—despite recently enacted federal rulings outlawing segregated seating on interstate buses and in terminals. The police department in Winona was known for unrestrained cruelty toward Black prisoners. Hamer and her colleagues survived four days of terror, including brutal beatings and sexual assault, before they were released.

In the convention hearing room in Atlantic City, Hamer relayed what she’d been through in stark terms, describing the punches and “horrible screams” that echoed in the Winona jail, and how the police pulled up her dress, exposing her bare body. The television audience was awed; President Lyndon Johnson, who listened to the convention live, was frightened. While he personally agreed that Mississippi, with a population that was half Black, shouldn’t be allowed to seat an all-white delegation at the convention, he was losing support from white southern Democrats who were flocking to the segregationist George Wallace and the ultra-conservative Barry Goldwater. Seeking to blunt the impact of Hamer’s speech, Johnson called a press conference to pull cameras away from the hearing room, and soon negotiated an agreement with prominent civil rights leaders, including Dr. King, to seat the all-white delegation and give a paltry two nonvoting seats to the Mississippi Freedom Democratic Party.

Hamer was deeply betrayed—“We didn’t come all this way for no two seats,” she told a reporter—but her demands for representation had not failed. A year later, Johnson signed the 1965 Voting Rights Act, which reinforced the rights secured by the 14th and 15th Amendments, made poll taxes and literacy tests illegal, voided other laws that obstructed the rights of citizens to vote, and allowed federal registrars to monitor voter registrations and elections in states with histories of disenfranchisement. In 1968, at the DNC convention in Chicago, a reconstituted Mississippi Freedom Democratic Party, now known as the Loyalist Party, was seated on the floor; Mississippi’s all-white delegation was turned away. A record 340 Black delegates and alternates from across the country sat and voted for the party’s nominees. In 2006, President George W. Bush signed the Fannie Lou Hamer, Rosa Parks, and Coretta Scott King Voting Rights Act Reauthorization and Amendments Act of 2006, reaffirming the 1965 law.

Today America faces a new voting rights crossroads—the kind of moment Hamer, who continued to face hardship but continued her activism until her death in 1977, would find all too familiar. In 2013, the Supreme Court reversed key provisions of the Voting Rights Act. Federal oversight rolled back. State and local officials closed polling sites, made voting hours shorter, purged voter rolls, and passed stricter voter ID laws. In September, Texas passed SB1, one of the most restrictive voting laws in the nation.

Once again, it is harder to vote in minority and poor communities, and once again, advocates are pushing back. On November 4, the Department of Justice sued Texas over SB1, arguing that it violates federal voting rights laws. Congress is still considering the Freedom to Vote Act and the John Lewis Voting Rights Act. If these bills become law, they will help secure voting rights by setting national standards safeguarding access to the ballot, improving election security, ending congressional gerrymandering, securing elections from foreign influence and dark money, and easing access to voter IDs.

This time around, we don’t have Fannie Lou Hamer to call on us to fix our deeply and profoundly broken democracy. But we carry her story, which reminds us of the travails generations of Black Americans have endured in the fight for their civil rights—and that a single, ordinary voice can bring about the extraordinary change we want to see.