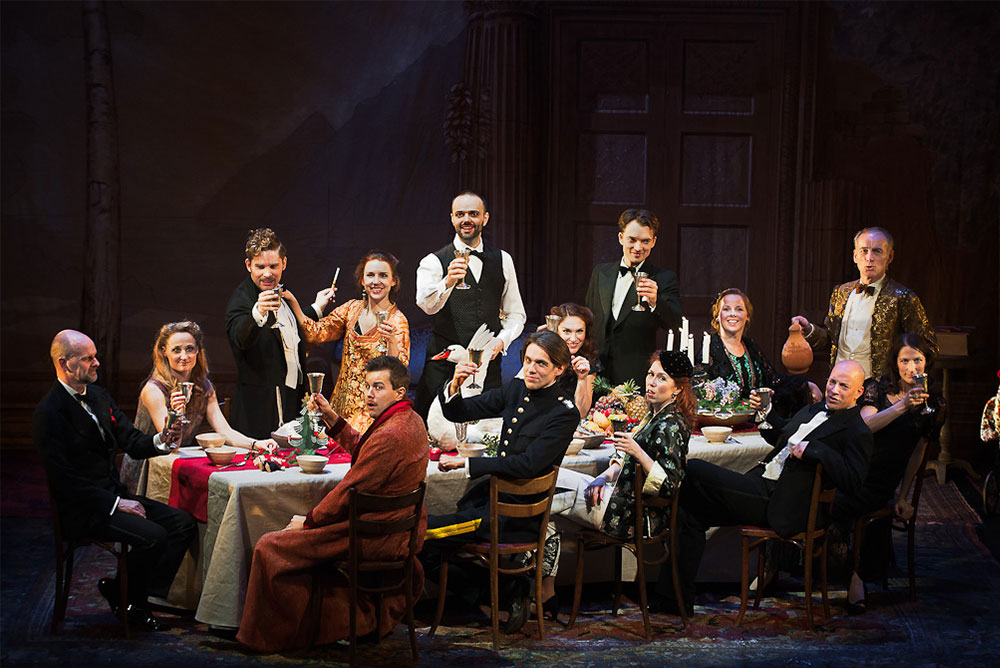 Christmas Production at the Royal Dramatic Theatre in Stockholm. Courtesy of Wikimedia Commons/Urbanwedin.

This is the time of year when families come together, crossing county and state lines and national borders, traversing bodies of water and mountain ranges that made cannibals of our forebears, fighting through masses of humanity at airports and train stations and on highways built on the bones of nameless working men and women, hurtling toward our destinations like human cannonballs.

The level of stress we feel can be harder to cut than a Butterball turkey: Not only are we homing in on the family dinner table where so much that has determined us has happened, but this Diwali or Thanksgiving or Hanukkah or Christmas feast is a kind of recurring dream (or nightmare, as the case may be). We may not be thinking about it, but we are keeping the dead alive with each family reunion and culinary tradition. We are keeping customs so longstanding that we barely know their origins.

No wonder we feel a little crazy around the holidays.

And we continue to celebrate the pull of family ties even as they unravel, sometimes quite noticeably, all around us. It may seem as if our family identities are experiencing a forced reboot where preferred pronouns, critical race theory debates, and a million other powder kegs threaten to blow up the system—even before the turkey gets carved. We feel our present moment is especially fraught, even though our predecessors sometimes literally stepped through minefields to make their way home to hearth and family, even when it meant sitting across from John Birchers, segregationists, religious bigots, and worse.

Still, this year’s feast may seem like the last straw. Was it ever thus, or have we finally come to the family tipping point? Will this be our last supper before the great cancelling? Knowing the carnage to come, should we even come home at all? Are the ties that bind stronger than the tribalistic othering of our extended family’s persecutions?

Has coming home for the holidays become the definition of craziness?

We are likely to never know our whole family story, and we are probably lucky that we don’t—but it’s all still there underneath the silt of Time, affecting our actions and relationships through the sediment in unexpected ways. We are related to and loved by individuals who have survived wars and other global catastrophes just to get here, who have made choices and espoused beliefs antithetical to everything we care about, who may barely condone our life choices, and yet who share our blood. This is the primordial ooze that glazes our table’s honey-baked ham.

Indeed, we are indentured to family; it’s in the word itself—family. The Latin famulus is a servant or slave, and the historical idea of family goes beyond lineage to estate, property, and the collective value of a domestic household. We may adhere to it or rebel from it, but we will always have its mark on us.

The faddish interest in family trees and finding our roots makes sense, not only in trying to get beyond what we already know of parents and grandparents, but in helping us determine a narrative thread amid what is otherwise a tangle of opposing family values. Sepia photos seem less controversial than the talking heads on Fox or MSNBC. Perhaps genetic ancestry can bring us all together and off the firing line.

DNA may not lie—but what does it all really tell us? What meanings can we cobble together from racial and ethnic percentages on pie charts? What does a ship’s manifest really say about the long-lost antecedent emigrating from pogrom or famine? Perhaps it connects us to world history writ large enough to read in the dark. But the family mystery remains: Who were they really? Would they have understood me? Sure, we’re family, but might we have been friends? And beneath the old-world fashions and foreign names, what secret madness were they hiding?

Nature, nurture, love, damage: It’s all there at the family dinner table, somewhere between the rice and peas and the alcohol, and sometimes it might seem like it’s just too much to bear—especially when the narrative thread gets frayed.

Out of this fundament of doubt arises the family play. Of course, the genre exists also on film and in novels, but on stage the family play has grown roots so deep that they intertwine with the electrics and the plumbing and threaten to raise the floorboards. It would seem that the theater was made for teasing out the knots of ancestry one sin at a time.

We Americans are particularly good at dramatizing such narrative threads, but we certainly don’t own the rights. The Mahabharata, the immense Sanskrit epic about cousins who go to war over politics, sexism, and immorality penned by Srila Vyasadeva and Ganesha, recounts events from more than 5,000 years ago, 2,500 years before Oedipus Rex appeared. In the intervening millennia we have been inundated with families misbehaving in ways we can’t unsee. But you don’t have to carve your own eyes out of your head to get the underlying point: The families on stage are extreme versions of the ones we go home to.

In this moment of trigger warnings, let it be said that all family plays are triggers and that good plays trigger with intent. They zero in on past trauma and make it present and immediate. They cause a very specific kind of emotional distress: The audience, transported by memory, may find itself unable to remain present in the moment—yet it cannot look away, it cannot press pause.

Birthrights, grudges, feuds, illicit unions, and deeply buried secrets keep us watching even when we don’t want to. According to my mother, my own father sat watching all four acts of Eugene O’Neill’s great mid-century play Long Day’s Journey into Night while obsessively gnawing the skin off the cuticle of his thumb. Did he recognize his own mother in the doomed Mary Tyrone? Did Mary’s doomed son Edmund’s psychic stress reflect his own love/hate relationship to a family torn apart by the American Depression?

I wish I could have asked him. But when I am gnawing at my own thumb while writing my own versions of the family play, I realize that writers are, in a way, cannibals when we attempt to tell the tale of those who came before, tearing at themselves in the piteous search for the narrative thread. Mary Tyrone was not my father’s mother, nor was Edmund my father. Yet somehow, they trod the same narrative path with my father over the same Donner Pass in the dead of bleak midwinter. And watching it made him chew his own flesh.

But it doesn’t always have to be like that. In 1931, Thornton Wilder wrote The Long Christmas Dinner, a play where 90 years go by without a pause in the action. This is a narrative thread on an epic scale yet told in just a few scant minutes. Life courses come and go without fanfare but with love. Characters enter from a portal decorated with fruit and flowers and exit through another hung with black velvet. They age in front of us with little or no physical alteration, and the audience must examine a life span all at once.

The result is funny and tragic, often at the same time. Although no specific dialogue presages the specific rancor of our political tribalism, we get the sense that the holiday table is a place where family unloads upon one another their frustrations and fears—same as it ever was. “Every last twig is wrapped around with ice. You almost never see that,” remarks the unofficial family historian of the play and the character most aware of Time passing, Young Genevieve, not knowing that her mother observed the same thing years before, and that her daughter-in-law will make the same remark years from now at the same table. But, thanks to the telescoped nature of the piece, the audience remembers. They can’t forget, and they wouldn’t want to.

We are all the crazy children of parents too difficult to forget. Nature, nurture, love, damage: It’s all there at the family dinner table, somewhere between the rice and peas and the alcohol, and sometimes it might seem like it’s just too much to bear—especially when the narrative thread gets frayed.

Plays are both prompts and provocations. They point to the madness of our ancestors to help us understand the instabilities of our own lives, tendrils of triggering hostilities growing deep down just under the festive tablecloth. We differ more by degree than kind; we may share DNA or the scars of war, but at least we have perspective, as Shakespeare tells us, “to hold as ’twere the mirror up to nature: to show virtue her feature, scorn her own image, and the very age and body of the time his form and pressure.”

Whether in the hands of Sophocles, O’Neill, Wilder, or the scores of other playwrights, the family play helps us see that aside from the birthing and the dying, our experiences are not all that different from each other’s. We are all a little crazy and a lot unforgettable. It is quite literally all in the family. The madness is both intrafamilial and interfamilial. Whatever madness awaits you at home for the holidays, not only will you get through it, but you’ll likely see—or have already seen—aspects of it on stage at some point. Perhaps your reflection will help you get through the next meal amongst those who made you what you are.