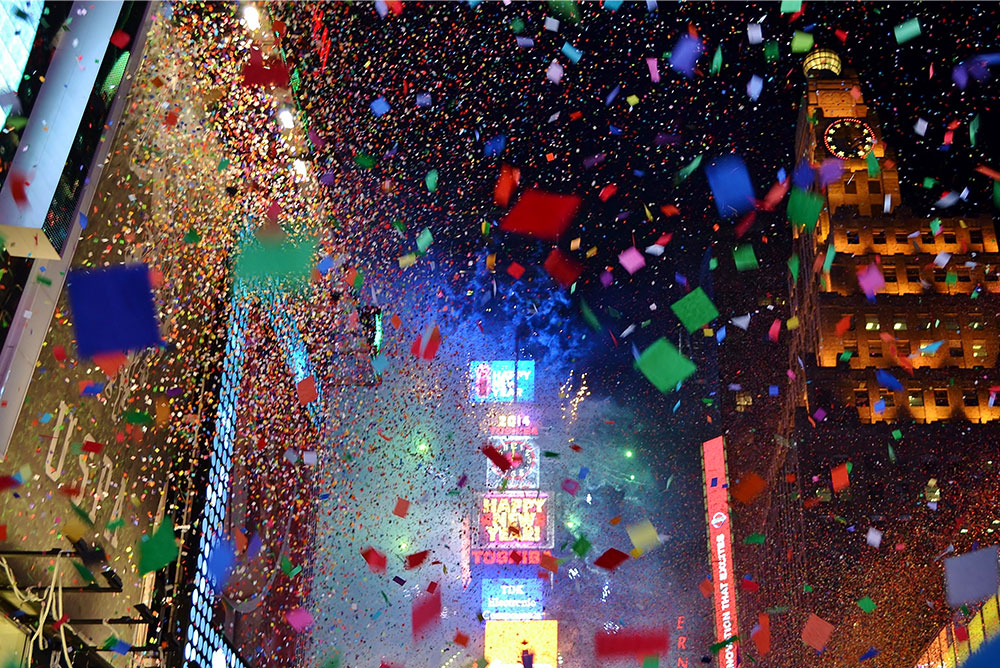 Few people counted down to anything until the 1960s and 1970s—and yes, that included the new year. Celebrations and midnight kisses on December 31, of course. Countdowns, no. How, then, did the countdown go from almost nonexistent to ubiquitous in the latter half of the 20th century? And why are we so drawn to them now, especially to mark one year’s end and another’s beginning?

Countdowns as we know them today serve many purposes. The New Year’s Eve countdown might be characterized as a “genesis countdown”: After time runs out, it starts over again. The wait for the new year—with its predictions, resolutions, and parties—is typically generative, optimistic, and hopeful. But there are also “apocalyptic countdowns,” in which after time runs out, disaster ensues. Today, we wonder how much time we have until the next COVID-19 variant, natural disaster, or terrorist attack. Both of these countdown types took form during the Atomic Age.

Though disaster has always been a part of American life, the threat of nuclear annihilation introduced pervasive existential fears. Notably, in 1947, the Bulletin of the Atomic Scientists introduced the Doomsday Clock, which to this day provides a visual reckoning of just how close we are to apocalypse. In the years that followed, these same scientists were the ones who brought the term “count down” to the American lexicon. A 1953 San Francisco Examiner article reported on an atomic bomb test in the nearby Nevada desert: “a designated official on a loudspeaker and short-wave radio hookup announces at intervals the time remaining before the explosion. At the very end he intones ‘minus 10 seconds, minus 5 seconds and minus 4 seconds’ and so on down to the moment of the explosion.”

A few years later, Alfred Hitchcock domesticated the atomic countdown in the 1957 made-for-television movie Four O’Clock, transplanting it into the basement of a suburban home wired with explosives in the minutes and seconds before the eponymous time. The televised countdowns of the 1950s, whether real or fictional, were frightening temporal experiences, in which time was distended and stretched, and then extinguished.

But on May 5, 1961, the countdown got its first major positive association. Some 45 million Americans watching the national nightly news heard the countdown to the successful launch of America’s first manned space flight. The blast-off was followed by astronaut Alan Shepard saying, “Roger, liftoff and the clock has started.” Time did not end, as apocalyptic countdowns had threatened; instead, a new clock began.

The countdown associated with rocket launches had its origins in the Weimar Republic, where Fritz Lang’s 1929 film Woman in the Moon featured an extended countdown to a moon rocket launch. No one had ever heard of or seen anything like the launch before—or the countdown. The lavish science fiction multi-reel film had an outsized impact on Germany’s rocket scientists, who after World War II became central to the American space program. One of the advisors on the film was early space travel enthusiast Willy Ley, who later immigrated to the United States, where he worked for NASA, orchestrating its rocket launches.

Whether personal or public, the [countdown] clock’s goal is to mitigate impatience, to replace uncertainty with anticipation, and to fill empty waiting time with a quantified temporality.

With each televised rocket launch through the 1960s, the countdown accumulated more and more positive associations with the public, building up to the historic countdown and liftoff of Apollo 11, the spaceship that took a crew of three men to the moon. The elements of the genesis countdown as we know it today were etched in history on July 16, 1969, when at least 500 million people around the world tuned in to hear a loud and clear countdown give way to an exciting, daring, and transformative objective.

During the 1970s, the countdown moved beyond atomic test sites and space missions and onto radio and television shows—and away from the nihilism of a bomb blast toward the triumph of a rocket launch. “American Top 40” hit the radio waves in 1970, followed by the popular Australian music television show Countdown in 1974. By counting down to the latest greatest hit, this burgeoning genre of show slowed the rush of time and demarcated the recent past. Their terrain was not time, but rather “the top” or “the most popular,” organized sequentially and leading not to “zero” but to “number one.” Other kinds of countdown programs amplified the race against time. In the long-running British gameshow Countdown, for example, contestants try to complete number and word problems in a set amount of time. A very large analogue clock, reminiscent of the Doomsday Clock, hangs over the show’s set. In this iteration, the show’s triumphant contestants demonstrate that the race against time can be won—that is, that disaster can be averted.

The apocalyptic and the genesis countdowns eventually made way for the ultimate celebratory countdown: the one to the new year. Americans celebrated New Year’s Eve publicly in various ways beginning in the 1890s, including with the ringing of bells (mostly at churches) at midnight. The first ball dropped on the roof of One Times Square to mark the arrival of 1908, and in the 1930s and 1940s, commercial radio broadcasts heralded the arrival of the new year to rural and urban audiences alike at midnight. But the first countdown I have identified was in the late 1950s. During the last few seconds of 1957, broadcaster Ben Grauer proclaimed to a national radio audience from a perch overlooking Times Square, “’58 is on its way, 5-4-3-2-1. The ball is starting to slide down the pole, and it is the signal that ’58 is here.” He didn’t get much traction: The extant recording features a crowd making merry but definitely not counting down.

Through the 1960s, Grauer tried to introduce New Year’s Eve countdowns on television, presumably as a way to extend what was, after all, an extremely short-lived event. Still, while you can hear the crowd cheering on these broadcasts, they don’t join him in the countdown. Picking up on Grauer’s innovation, Dick Clark’s New Year’s Rockin’ Eve, which debuted to welcome 1973, featured confected countdowns that were staged on its dance party sets, and sometimes were painfully out of sync with the Times Square ball drop.

Impossible as it is to believe, my research into extant radio and television broadcasts and newspaper reports shows that it was not until seconds before the arrival of 1979 that a Times Square crowd counted down to the new year. At that moment, it was clear that countdown culture had arrived and was here to stay.

By the end of the 1980s, countdown clocks were installed in Times Square, television graphics began to show the amount of time remaining until midnight, and television hosts guided enthusiastic audiences through the count. As the year 2000 approached, though, something different happened. Millennium countdown clocks proliferated across the globe (though 2000 was not the millennium), accompanied by apocalyptic fears about the end of time, or at the very least Y2K, the much-discussed epic global computer network crash.

The first two decades of the 21st century have careened between genesis and apocalyptic countdowns; take for example, the countdown clocks to Olympic Games and the latest Climate Clock, found online (and in New York City’s Union Square) exhorting action before it is too late. Countdown clocks for every conceivable event are everywhere today, from the personalized digital “Countdown to Your Big Day” clocks that can be embedded on social media feeds before your birthday to the bus and subway countdown clocks that tell everyone when their ride will arrive. Whether personal or public, the clock’s goal is to mitigate impatience, to replace uncertainty with anticipation, and to fill empty waiting time with a quantified temporality.

Today our countdown clocks and countdowns continue to oscillate between genesis and apocalypse. As 2021 gives way to 2022, it is hard to know what we are anticipating when the clock hits midnight. And so, I suspect that some countdowns this year will be inflected with a tinge of hesitancy and doubt. Still, many of us will want to join in the hopefulness of the genesis count, as did that Times Square crowd welcoming 1979 with their triumphant “Happy New Year” cheers—rejoicing when the clock starts again.

Editor’s note: This piece has been updated to include “American Top 40,” which premiered ahead of the Australian music show Countdown.