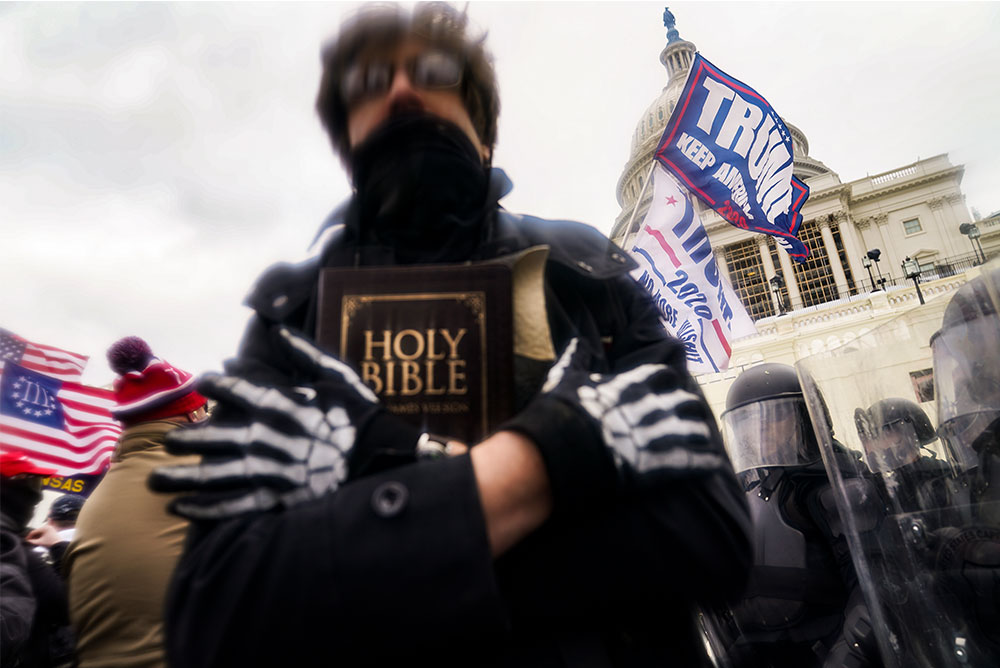 A man holds a Bible as Trump supporters gather outside the Capitol in Washington on Jan. 6, 2021. Courtesy of AP Images.

“I am here by special divine appearance, a living soul,” Pauline Bauer stated in federal court this summer while standing trial for crimes including violent entry. “I do not stand under the law. Under Genesis 1, God gave man dominion over the law.”

Bauer and some of her fellow Jan. 6, 2021 rioters have testified that they were divinely inspired to participate in insurrection at the U.S. Capitol. They carried crosses and religiously themed posters and participated in a prayer on the Senate floor. Testifying to a congressional committee a few weeks after Bauer’s court appearance, District of Columbia police officer Daniel Hodges, who sustained wounds to the skull and attempts to gouge his eyes out, described seeing the Christian flag directly in front of him as an insurrectionist beat him with his own baton. Other signs read, “Jesus is my savior, Trump is my president” and “Jesus is king.”

The blending of Christian symbols with national imagery is not a new phenomenon in the United States. Some of the earliest European colonizers maintained that the formation of the U.S. was a divinely ordained set of events. But the type of white Christian nationalism witnessed on Jan. 6 is also a product of the Cold War.

In the 1950s, relations between the United States and the USSR dissolved into an arms race nursed by fears that World War II was just a prelude to a more cataclysmic war. Some evangelical leaders converted the political threat of communism into the detrimental religious threat to the very soul of the nation. Billy Graham, the late traveling evangelist and preacher, called on all Americans to engage in a “born again” experience in hopes of not just saving their personal souls for the afterlife but providing the United States spiritual warriors against the godless communists. In Graham’s theologizing of Cold War realpolitik, America was divinely good while the USSR was satanically evil. In one early sermon at his “Los Angeles Crusade,” Graham told his listeners: “Communism is a religion that is inspired, directed, and motivated by the Devil himself, who has declared war against Almighty God.”

From the white evangelical perspective, the divine protection from communism afforded to the United States required evangelicals’ ongoing religious and political labor. White evangelicals prayed for the nation within their homes and churches and galvanized their membership base. Billy Graham, by then pronounced the “preacher to the presidents,” met publicly and privately with each president starting in 1950 with Harry Truman.

As America was experiencing a post-war manufacturing boom, white evangelicals were manufacturing born-again souls. New evangelical denominations emerged in the religious marketplace along with mass publications, seminaries, and mission organizations, which yielded thousands of new converts. And while many children were under their desks practicing for a possible nuclear holocaust, white evangelicals were placing their faith in the divine as a security measure against the evil communist enemy.

In a convoluted way, the Jan. 6 insurrection was an attack on communism, or at least what white evangelicals understand as communism within their country.

A spiritual arms race for political superiority developed within the collective theology of white evangelicals. Within this construction, the war against communism and the atheist Soviet “Evil Empire” could only be won if the U.S. was a godly Christian nation. In 1954, the federal government revised the Pledge of Allegiance to this end—now, the United States was “one nation, under God.” Fearful of a nuclear holocaust, white evangelicals, as well as many other Americans, took solace in the fact that the U.S. had established itself as a god-protected nation.

Even though white evangelicals saw their interests manifest, there loomed below the surface a suspicion that godless conspirators would undermine their efforts. Developments in the political and social spheres affirmed this suspicion. The first crack in the godly shield emerged in 1962, when the Supreme Court banned public prayer in schools. The chaos and upheaval of the civil rights era solidified evangelical fears that the U.S. was straying from the divine purpose upon which it had been founded. They grew to despise the direction that liberalism and equity measures took the country.

In their fear and loathing, white evangelicals needed to blame someone, something, or a group of people for the ways in which the United States failed to align with their vision. After the fall of the Soviet Union in the 1980s, white evangelicals turned their attentions to a list of internal threats—including liberals, secular humanists, LGBTQ people, the poor and disenfranchised, activist Hollywood actors and sports stars, the ACLU, and pro-choicers. The shorthand for these enemies remained “Commies.”

Paranoia in white evangelicalism has festered in recent decades. The number of those affiliating with white evangelicalism is shrinking. Prayer has not been reinstated in public schools, abortion remains legal, and evolution endures as a standard scientific explanation. This suspicion of the American government and fellow citizens creates a collective marginalization complex—white evangelicals think that they are under attack. This means some of them are willing to take matters into their own hands with spiritual and physical measures.

In a convoluted way, the Jan. 6 insurrection was an attack on communism, or at least what white evangelicals understand as communism within their country: an evil so persistent that they needed to defend the nation and themselves. “QAnon shaman” Jacob Chansley articulated this on the Senate floor, when he loudly thanked his god for “allow[ing] us to send a message to all the tyrants, the Communists, and the globalists, that this is our nation, not theirs, that we will not allow the America, the American way of the United States of America, to go down.” For insurrectionists like Chansley and Bauer, our current federal government is godless, moving toward communism, and, thus, un-American. While Chansley has been sentenced to a 41-month prison term, he echoes a call to arms against the sentencing of America to damnation. These religious rioters seek a national conversion, even if it requires the use of spiritual and physical force. What remains to be determined since the insurrection is what needs saving—the church or the state.