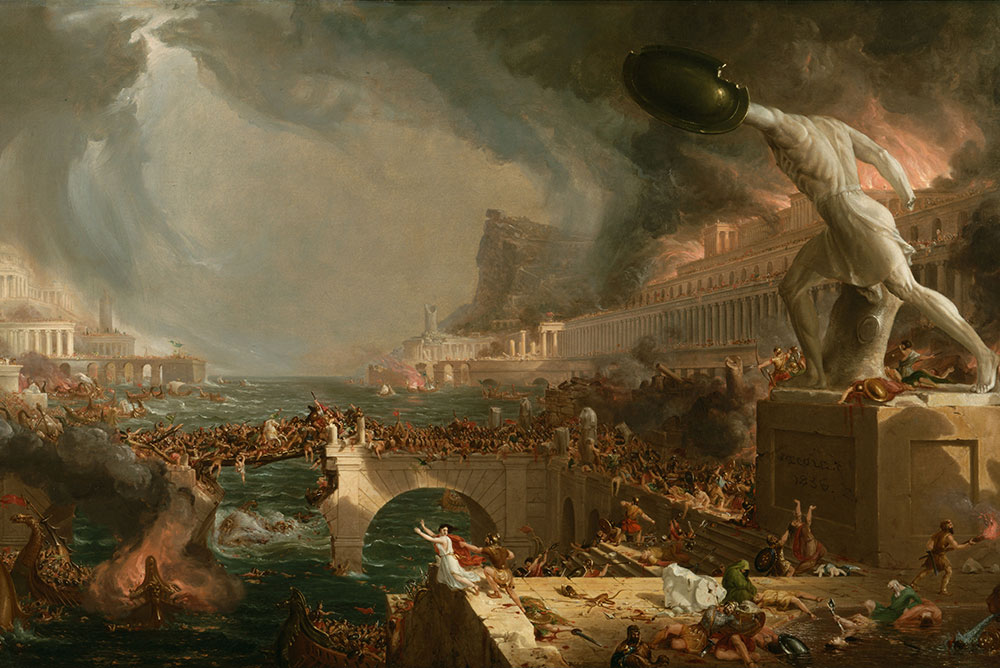 "Destruction" (1836) from The Course of Empire series by Thomas Cole. Courtesy ofWikimedia Commons.

How should we respond when our capital is attacked?

One enduring answer to that question lies in the ways that Romans responded after the sacking of Rome by the Visigoths and their king, Alaric, in the year 410 CE.

That fall of Rome is among the most famous and closely studied attacks on a capital in world history. It also shares some key particulars with the January 6, 2021 attack on the U.S. Capitol. Perhaps most notably, just as some American politicians spurred on the insurrectionists of Jan. 6, a group of 5th-century Roman politicians engaged in treacherous acts that eventually culminated in the attack on their capital.

Alaric’s final assault on Rome came after three years of failed negotiations over payment for past military services. Alaric had fought for the Romans in the Balkans upon orders from the emperor Honorius. But Honorius changed his plans and then refused to pay Alaric and his followers.

Early in 408, Alaric moved just north of the Alpine passes to Italy, and threatened to attack Rome if he was not paid. Honorius’s great general Stilicho convinced the Senate, which had grown increasingly involved in negotiations, to make some payment. But Stilicho’s support for paying Alaric aroused the suspicions of the emperor, so Honorius had Stilicho killed on allegations of having colluded with Alaric.

According to the Greek historian Zosimus, Alaric’s demands then changed; he wanted only a “moderate” sum of money, an exchange of hostages, and the concession of land in Pannonia (modern Hungary and parts of Austria and the Balkans) for his people to inhabit. Alaric marched through northern Italy to the walls of Rome unopposed. His first siege of the city in 408–9 brought suffering for the inhabitants. So, the Senate sent an ambassador to negotiate with Alaric and then voted to agree to his request. But Honorius and his courtiers kept delaying approval of the agreement.

Our leaders would do well to reflect on these Roman exemplars. We do not have to remove the fingers of members of Congress who colluded with the insurrectionists. But politicians must publicly acknowledge their responsibility for the attack, including spreading the “Big Lie” about the election.

In winter 409, Alaric seized Rome’s port, Portus, and its granaries. In a direct challenge to Honorius, the Senate, with the support of Alaric, recognized one of their own as emperor: Priscus Attalus. Then, Attalus installed a number of senators in prominent positions in his regime, although some senators, including the eminent Anicii family, refused to go along.

Attalus’s regime did not last long. After Attalus failed to defeat Honorius’s general in the province of Africa, Alaric removed his support for Attalus, who renounced his claim to the throne.  Once more, Alaric began negotiations with Honorius. The unexpected appearance of Alaric’s enemy, the Goth Sarus, who volunteered to fight with Honorius, disrupted what may have been the final resolution of the conflict; Honorius declared outright war on Alaric, who in anger turned against Rome.

For the third time, Alaric laid siege to the city.  No doubt, Honorius expected Rome would withstand another siege, and it may well have. But someone in the city—the culprit remains unknown—opened the gate for the Goths, and Rome fell. 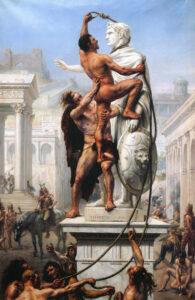 “The Sack of Rome in 410 by the Vandals” (1890) by Joseph-Noël Sylvestre. Courtesy of Wikimedia Commons.

Alaric’s path through the city makes his anger at Roman elite institutions visible. His men targeted political centers. They set fire to the lush green park known as the Gardens of Sallust, which were part of the imperial properties. Then they advanced to the center of the city, plundering and destroying public buildings in the Forum, including the Secretarium off the Senate House. They then looted certain churches and private houses, taking with them as much gold, silver, and captives as they could. Priscus Attalus, his son Ampelius, and the senators who had supported his attempted regime change left Rome with Alaric after three days of violence.

In the shock that followed Rome’s fall, many Romans across the Mediterranean decried this violence to the capital of the Empire and found it easiest to blame the “barbarian general” Alaric. In North Africa the Christian bishop and future saint, Augustine, was among those who interpreted the attack as God’s punishment for the Romans caring too much about the present world. Blaming Alaric or God was also safer for the senators who wanted to remain in Rome.

Yet contemporaries and later Greek historians acknowledged that some of the blame fell on the senators themselves. The disloyalty of Attalus and his supporters had undermined Honorius’s efforts to restore his authority as emperor and weakened his claim to the loyalty of the Roman troops at a critical juncture. Attalus had put his political ambition above the security of the state.

Alaric departed the city on August 27, 410, and died unexpectedly in southern Italy weeks later. The Goths then headed west for Gaul, easing the Romans’ fears. Some of the senators who had fled Rome appeared in public in the city once more.

A number of senators who had been loyal to Honorius emerged to help rebuild the city. Senator Epiphanius, who was also urban prefect (a position akin to mayor of Rome), started repairs on a section of the Senate House that had been damaged in the attack. Another senator, Albinus, oversaw the restoration of the food supply, and Probus, a member of the Anician family who had returned to support Honorius, was put in charge of state finances.  Absent from any of these positions were the senators who had supported Priscus Attalus, and, we must imagine, those who had left with the Goths as well.

Honorius’s new general, Constantius, regained control of Gaul in 415 and captured Priscus Attalus and his followers, handing them over to the emperor. We can only imagine the conversations among the senators as they saw the chastened Attalus being paraded through the city. No one spoke publicly in Attalus’s defense—including the senators who had sided with him. There was no attempt at minimizing Attalus’s role in the coup, nor did the senators pretend they had not witnessed an attempted regime change by their former colleague. Rather, the full Senate and the emperor witnessed and approved Attalus’s public punishment—the removal of his thumb and forefinger, the digits used for speaking. Attalus accepted his punishment, and was exiled to the Lipari Islands. No one objected or appealed the sentence.

Our leaders would do well to reflect on these Roman exemplars. We do not have to remove the fingers of members of Congress who colluded with the insurrectionists. But politicians must publicly acknowledge their responsibility for the attack, including spreading the “Big Lie” about the election. And if they cannot acknowledge their guilt and accept the consequences and take steps to repair the damage, as the Roman Senate did, like Attalus they should be forced from the capital.

Only then can our representatives begin to rebuild the civility and public trust that once made the Congress a respected institution, and the Capitol a hallowed place. The Romans did it, and their Senate lived on for another 200 years after the attack of 410.  We should be so fortunate.