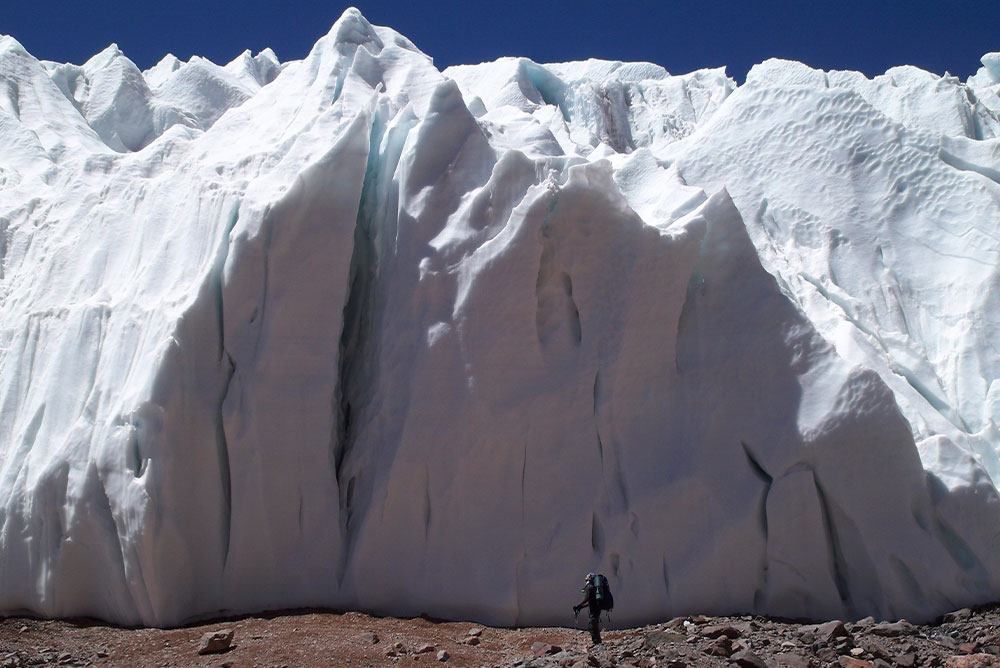 Argentina’s Pircas Negras Glacier, near the Chile-Argentina border, dwarfs a visitor. Like other glaciers of the Central Andes, Pircas Negras provides fresh water for people, agriculture, and industry nearby during warm months and dry years. Photo by Federico Barberis.

We’ve all heard the tragic stories of glaciers in peril: pieces of ice, the size of continents, breaking off of Antarctica or melting away in the Arctic Ocean near the North Pole, leaving polar bears starving and clutching onto remnants of crumbling sea ice.

What’s harder to connect with is what this all means for people in temperate places. While these dispatches from the far-off polar extremes of the Earth may feel removed from our reality, understanding our relationship to these colossal frozen giants is crucial for our own climate awakening. Learning about glacier vulnerability can guide our fight to stop climate change and illuminate ways to change course before it’s too late.

The glaciers around today are leftovers from Earth’s last ice age, which came to an end 12,000 years ago. During that time, all of Canada and a good swath of the northern U.S. was completely covered in ice. New York, at the peak of the last ice age, had a vertical mile of ice towering above its surface. Today, only a small fraction of that ice remains, with glaciers covering about 10 percent of Earth’s land surface. Still, they remain critical players in stabilizing Earth’s climate and ecosystems. Glaciers are white, which helps reflect solar heat back into space, and they are cold—two attributes that help cool our planet. But their most important gift to us might be fresh water. 98 percent of Earth’s water is in the oceans, salty and unusable for our daily needs. A whopping three-fourths of the miniscule amount of fresh water we have on the planet—the water we really need—is stored in Earth’s 200,000-plus glaciers. What’s more, new fresh-water-containing snow that falls on a glacier, thanks to the glacier’s cool microclimate, can survive all year long, providing continual fresh water downstream, while snow that falls elsewhere melts off in the spring and is quickly consumed by the ecosystem. You can think of a glacier as a water faucet, left slightly open for us, enabling us to enjoy water all year long.

Glacier melt is nothing new. In fact, we go in and out of ice ages every 100,000 years or so, as fluctuations in the shape and tilt of Earth’s orbit around the sun position some portions of the Earth farther from the sun, making them colder, and shift other parts of the Earth closer to the sun, warming them up. Water that is sucked out of the oceans through evaporation is converted into snow, which falls on colder regions of the planet and remains frozen as long as cold conditions persist. If the cold climate remains long enough, you get large glaciers—and an ice age that can last 80,000 years. All of this ice-making takes a lot of water out of the ocean, and sea levels fall as a consequence. Then orbital conditions shift again, the ice melts, and glaciers send colossal amounts of water back into the oceans, flooding coastal lands anew. You can see evidence of this cycle in downtown Miami’s financial district, where exposed coral remnants 15 feet above current ground level provide proof that the area once lay at the bottom of the sea, at a prior historical moment of the Earth when glaciers melted much more than they have now—an ominous announcement to us of what is yet to come.

While this pattern happens naturally every 100,000 years, human activity is accelerating glacier melt so fast that glacier collapse—a process that should have had thousands of years left to play out—is occurring in mere decades, or even faster. Much of the damage we’ve already caused will be irreversible for millennia. Antarctica’s Thwaites Glacier recently began to crumble, and pieces of it are now floating in the ocean and rapidly melting. Its demise could trigger further destabilization of surrounding glaciers, and raise ocean levels around the world by several meters.

Human activity is accelerating glacier melt so fast that glacier collapse—a process that should have had thousands of years left to play out—is occurring in mere decades.

Today, glaciers cover a surface area of roughly 5.8 million square miles. That’s larger than the United States, at 3.8 million square miles. If all that ice were a single country, “Glacierland,” it would be the Earth’s second largest, behind only Russia at 6.6 million square miles. While the biggest glaciers are mostly found in the polar regions or in Greenland, a significant number remain closer to home, in high-altitude environments like the Rocky Mountains, the Sierra Nevada in California, Nepal, the Central Andes, the Tian Shan mountains of Asia, and the European Alps. There are even glaciers in Africa, on the equator, and in the South Pacific. There is still plenty of water left to melt in climate-vulnerable glaciers. And the rapid sea level rise they’re causing could result in massive floods over millions of acres of coastal lands, displacing hundreds of millions of people in the coming century. If all remaining glacier ice melts the sea would rise by about 230 feet!

But sea level rise is not the only impact of melting glaciers. Rapid glacier melt creates a feedback loop. As glaciers warm, the climate impact on Earth is magnified, building on itself, accelerating warming and speeding deglaciation. That’s because when white glaciers melt, Earth’s darker surfaces (on land and in oceans) absorb solar heat instead of reflecting it back to space—think of the effect of wearing a dark shirt on a very hot day, but on a planetary scale. This, in turn, makes the glaciers melt even more, and the Earth warm even faster.

Paradoxically, the pace that glaciers are melting at is also reducing our global supply of fresh water. As glaciers shrink, the dependable fresh water they provide for ecosystems, for farming, for industry, and for home use dwindles, too. Smaller glaciers mean there is less ice to melt each year. Melting glaciers, especially those perched on mountains, also pose another kind of danger when they lose their physical integrity. Ice structures weaken when they warm, fracturing and collapsing and rushing down mountainsides, carrying with them rocks and debris that can take out everything in their path. I call these “glacier tsunamis,” and they are becoming more prevalent in places like the Himalayas and the Central Andes, where thousands of people have died in massive land and ice slides in recent years.

Melting glaciers create havoc with the weather, too. Have you ever noticed that most of Europe is at the same latitude as Canada, and yet is not nearly as cold in the winter? It’s because currents in the ocean and the atmosphere move warm water and air from Earth’s equatorial regions through the Arctic and Antarctic, where the air and water cool off before returning to the equator (like an oceanic and atmospheric conveyor belt/AC system). The ocean has a natural churning and circulation effect that is in perfect balance to keep global temperatures stable. If glaciers melt and drop too much fresh water into the salty seas, oceanic water circulation and air currents can stall, leaving cold water and cold air in the polar regions and warm water and warm air near the equator. This breakdown of the ocean’s “conveyer belt,” so to speak, could be tragic for local climate systems all over the planet, sending the tropics into extreme heat and regions like Europe into a deep freeze.

My work exploring the ways glaciers influence our ecosystem has shown me just how significantly these rapidly diminishing sheets of ice impact all of our lives. But it has also made me realize that we shouldn’t resign ourselves to this future. It isn’t too late to slow, stop, and even reverse climate change. We can save glaciers, and avoid a deepening of the climate emergency. I recently returned from the global climate summit in Glasgow, where 108 global leaders pledged to collaborate to reduce methane gas emissions by 30 percent by 2030. Given that methane is 86 times more potent than carbon dioxide as a greenhouse gas, this is a big step to slow warming, save glaciers, and restore our climate.

The COVID lockdown also showed us that we are capable of limiting our use of carbon and other so-called “super pollutants” that are even worse for climate than CO2, like methane, black carbon, dirty refrigerants, and smog. While before the pandemic, the idea that we’d stop everything to save our climate would have been unthinkable, we in fact did stop everything to tackle COVID. With driving, air travel, and industry at rest, for example, we removed black carbon emissions from the atmosphere. Black carbon, or soot as it is more commonly known, causes severe respiratory disease in humans and is also a scourge on the environment, darkening glaciers and accelerating ice melt. With skies suddenly cleared of this pollutant during COVID, some residents of Nepal and India, who had lived lifetimes under a cloud of smog, saw the snowcapped Himalayas for the first time.

The positive effects of COVID on our environment and on the climate emergency were temporary—and as COVID restrictions eased, we went back to business as usual and the benefits vanished as quickly as they had materialized. Nonetheless, the temporary spike in climate health proved that collective action to give nature a break and to repair our climate is possible. We are all vested players in our global climate and each of us has the individual power, and choice, to make good climate decisions which can have huge collective benefits.

We simply have to realize how urgent our climate emergency really is.