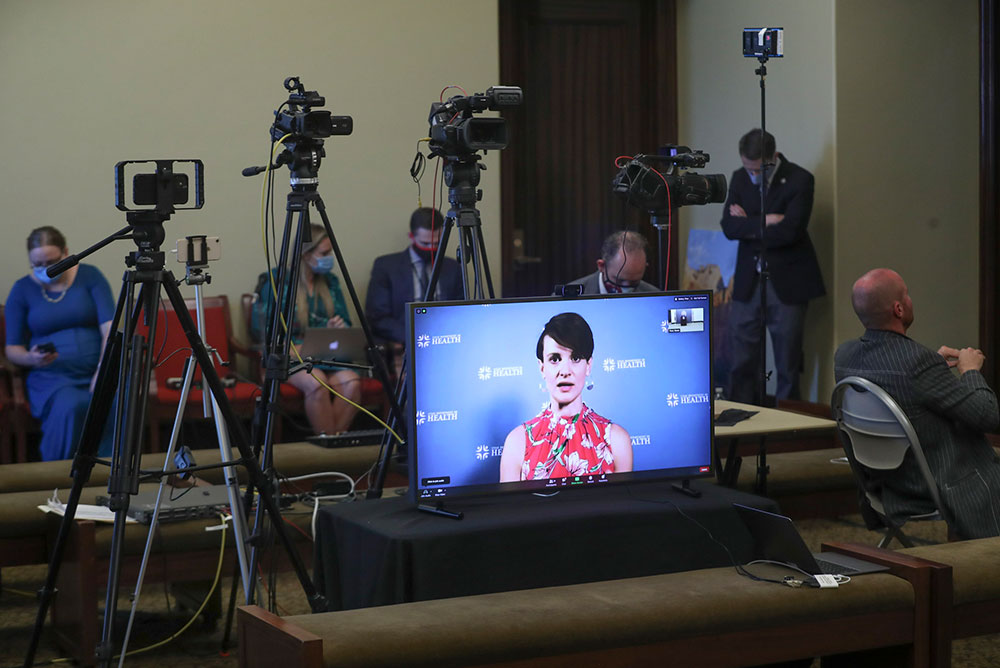 A friend recently reminded Kavita, a physician epidemiologist, about a text exchange the two had shared in February 2020. When he asked how worried he should be about SARS-CoV-2, then a “novel coronavirus,” Kavita had told him to get his flu vaccine, texting that influenza was the most important respiratory virus circulating in the U.S. at the time.

Today their conversation seems darkly humorous. Kavita’s recommendation to get the flu shot held up. But as we all know now, SARS-CoV-2 rapidly became the most important pathogen of concern. The friend was absolutely right to have worried about it—a lot.

After two years of evolving science and persistent uncertainty, one thing has become clear: People increasingly mistrust public health agencies and the scientists who inform these policies because our information cycles fundamentally are mismatched to the way the scientific community develops recommendations and guidance.

The virus that unleashed COVID-19 did not arrive with an instruction manual, much less GoPro cameras to let us observe exactly how it affects individuals and populations. To learn how the virus behaves, scientists need to research and evaluate it, and to synthesize their findings—and to repeat the process every time a new variant emerges. Yes, the scientific community has mobilized to share information, lifting the paywalls that limit access to scholarly journals and innovating to ensure new studies are read broadly and quickly. But a significant gap remains between early research findings and implementable, science-based recommendations.

The time it takes to bridge that gap—occasionally days but more often weeks or months—is way too long for a world in which stories go viral in minutes, and content creators race for consumers’ eyes and ears.

A recent example is unfolding still. On November 26, 2021, the World Health Organization announced the identification of Omicron as a “variant of concern.” Scientists around the globe rapidly gathered, shared, and analyzed information, then began deliberating how this variant behaved among different groups (e.g., vaccinated versus unvaccinated, children versus adults, symptomatic versus asymptomatic, immunocompromised versus immunocompetent, in places where Delta still predominated versus in places where it had abated, etc.). Then, they had to synthesize those conclusions into guidance. The general public heard and saw very little of this process, instead experiencing co-narration by a thousand voices, predicting what Omicron might mean, from “…that’s the end of the pandemic!” to “…it defeats the vaccine!”

It is easy to point fingers at the health officials who told the public not to wear masks in March 2020. It is harder to live with today’s firehose of information, and decide to read beyond the headlines.

At a White House press conference during Omicron’s peak, President Biden was asked why he hadn’t changed leadership at the CDC. The question implied that since the CDC’s advice continues to evolve, CDC leadership must be confused. “The messages, to the extent they’ve been confusing—it’s because the scientists, they’re learning more,” the President responded, underscoring our point.

The public needs to remain aware that the messages we’re receiving through the media and others may reflect preliminary science. Having access to early information and competing points of view is part of being informed citizens. But what we do with such information matters. Here are a few ways we can gut check ourselves if (when) the next big sensational story happens: We can pause to acknowledge that headlines or social media posts, however definitively worded, may represent just one facet of early and incomplete findings. We can read further and seek other trusted sources—not to confirm our views, but to get more context to round out the picture. And we can try to remember that preliminary discoveries and varied interpretations are part of the process.

While it’s true that many public health agencies have struggled to communicate succinctly and clearly, their job (arguably, the most important one) is to control and prevent communicable diseases and health threats. These agencies focus on protecting current and future populations. Their successful public health efforts are not always emphasized, and are often taken for granted, remaining relatively invisible.

Consequentially, we’ve forgotten certain lessons from the past. After the 1918 and 1919 flu pandemic, public health’s pandemic and epidemic prevention efforts ramped up—only to decline in recent decades as we all settled into an optimistic sense that we would never face a years-long pandemic with over 900,000 national deaths and counting. Preventing disease has taken a back seat in the public consciousness. Instead of supporting and expanding public health infrastructure and personnel, congressional and state budgets have only temporarily increased. Our healthcare infrastructure runs really lean, forcing us to respond to dangers as they hit. We’ve faced our most dramatic healthcare staffing shortages yet during the Omicron surge, even though we’ve already experienced crisis-level shortages at least twice before in the pandemic.

Perhaps we also learned some wrong lessons from other recent, potentially pandemic-level pathogens. The rapid identification and successful control of coronaviruses SARS and MERS resulted in those epidemics going off the radar for most people in the U.S. in a matter of weeks to months. Public expectations of a quick resolution may have solidified around these successes.

They certainly affected public health officials’ expectations in late 2019 and early 2020. The successful strategies for containing SARS and MERS had relied on contract tracing and shutdowns—not masks. When SARS-CoV-2 emerged, epidemiologists applied the knowledge they had of these prior coronaviruses, while they worked to learn more. Unfortunately, this new virus turned out to be armed with an “invisibility cloak” of asymptomatic transmission, which called for different recommendations. Looking back now, we can see how expectations, early science, and public health messaging were out of sync from the start.

It is easy to point fingers at the health officials who told the public not to wear masks in March 2020. It is harder to live with today’s firehose of information, and decide to read beyond the headlines. Innovations and advancements have sped up the development of evidence-based guidance, but the process will never catch up to today’s information cycles. Perhaps one main lesson from the past 24 months is that the road goes both ways. As scientists are learning, the rest of us should be, too.