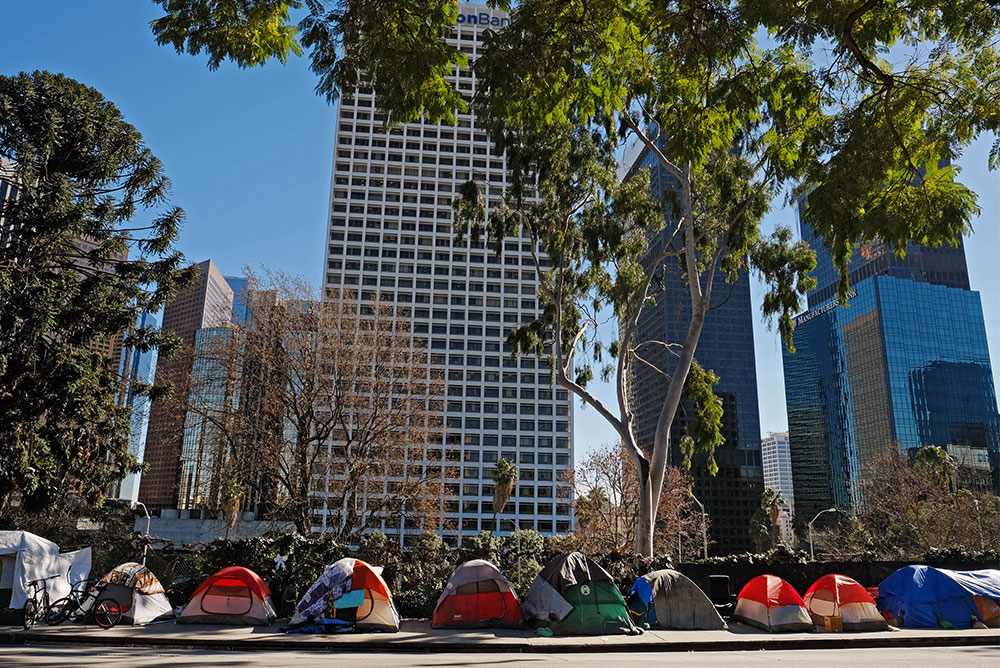 Tents from a homeless encampment line a street in downtown Los Angeles. Courtesy of AP Images.

If I were sleeping outside … where would I be?

We’d been invited to ask ourselves this question as we walked the streets in the dead of night, canvassing for strangers. I thought I knew the city well, but it appears vastly different when you’re looking for a place to bed down for the night.

Behind the hedges in front of a quaint apartment building? Too dark and secluded, vulnerable to robbery or rape. Could I rest on the front porch of that bungalow? Too risky: I might be mistaken for a burglar.

A grassy median on the corner of Hollywood Boulevard and La Brea was looking pretty attractive as a night’s lodging. This wasn’t what I had expected, nor what I had anticipated. But, then, neither was the foot.

It was an uncommonly chilly January night in 2018 when I encountered a bare foot protruding from a sleeping bag, on the sidewalk outside one of my favorite watering holes. “Do they have to camp out in front of our neighborhood wine bar?” I muttered to myself, sidestepping the offending appendage. “Can’t they go back home where they came from?”

With the arrival of friends and convivial beverages, the troubling thoughts melted away. But later, sinking into a warm bath, I tried to imagine whom that foot belonged to. I couldn’t picture anyone specifically, just a vague notion of a generic homeless person.

Cue the late night Googling of topics related to the homeless in Los Angeles. “Why are there so many …” “who are the …” and “what can one person do about the …?” And soon, I learned that in order to allocate resources, provide services, and receive some of that precious Department of Housing and Urban Development (HUD) federal funding, Los Angeles County is required to perform regular counts to determine the number of people sleeping unsheltered. In a county that spans over 4,000 square miles, the Los Angeles Homeless Service Authority (LAHSA), responsible for administrating the Greater Los Angeles Point-in-Time (P.I.T.) Homeless Count, as it’s called, relies on citizen-volunteers. Counting takes place at night, when folks are less mobile, lessening the chance of marking down an unhoused person twice. Notoriously self-absorbed Angelenos did this? That seemed hard to believe.

A grassy median on the corner of Hollywood Boulevard and La Brea was looking pretty attractive as a night’s lodging. This wasn’t what I had expected, nor what I had anticipated. But, then, neither was the foot.

And me. With all the largess of a visiting dignitary, I turned to the person next to me and introduced myself. “Yeah, I know who you are,” she replied. Oh, a fan, I assumed, when she added, “I’m a development executive at Imagine, you pitched to me once.” Unsuccessfully, she might have added (but didn’t), instead, introducing me to a klatch of similarly accomplished entertainment executives, veteran counters, who’d seamlessly blended into the crowd.

We were treated to snacks, a training video, and a round of reassuring Q&As conducted by the LAHSA representatives. The P.I.T. was strictly a visual count, carried out on foot. We weren’t to engage with our unhoused neighbors and—not to worry, not to worry—we wouldn’t be sent into areas where we might feel less than secure, like encampments.  “Treat everyone you encounter as if you’re visiting friends in their living rooms after a long, hard day,” instructed then-city councilmember David Ryu.

We were issued flashlights, neon orange vests, and official-looking clipboards, and in an act of faith that defies social convention, we hopped into vehicles driven by our fellow volunteers. Soon, I was one of four local moms in a minivan, snaking our way through Hollywood. Our survey tract included Gardner Street, only a handful of blocks from where I had lived when I first arrived here to pursue an acting career, in 1989.

Back then, the area was a warm landing spot for both families and people like me, just starting out. I’d easily slid into restaurant work to afford the $750 monthly rent for a small but comfortable studio, where I remained until the acting work steadied. The neighborhood appeared a lot less accessible and welcoming with rents now topping $2,500.

If I were sleeping outside … where would I be?

Trudging in and out of alleyways, we peeked behind trash bins and piles of construction materials, peered into dense foliage, and surveyed the odd outdoor alcove, but the majority of our unhoused neighbors were out in the open. Now it seemed foolish not to have understood the advantage of a well-lit spot. It was midnight when we tallied our last soul, but wait, what about that late model sedan parked in front of a hacienda style duplex? The interior of the car was obscured by a set of sunshades, which might indicate that it was being used as a shelter, but it was otherwise a twin of my own car. No, actually, it seemed better maintained than my car. We didn’t count it. 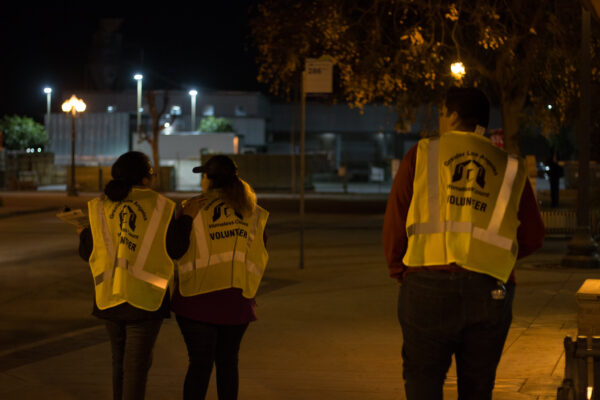 Courtesy of INSAN Foundation/INSAN for Humanity.

Before we departed, I asked my counting buddy what she would do if things spiraled down for her. “I guess I’d go back home,” she answered, citing a strong support network in another state. “What about you?”

My first decade in Los Angeles was experienced through Joan Didion’s lens. Numbed by the sprawl, the freeway traffic drained my will to live. It was convenient to characterize residents as show business cyphers. Like many transplants, I’d stubbornly resisted the city’s charms and when asked, repeated a standard refrain, “I’m only here to work in the entertainment industry. Then, I’m outta here.”

Thirty-two years later, I reside in Jonathan Gold’s Los Angeles, calculating driving routes that take me past the mini-malls that house the city’s best purveyors of spicy phos and tacos dorados de camarón. Despite the inevitable vagaries of a career in the arts, I hadn’t left. Instead, I forged deep ties and raised a child in a warm and engaged community that’s become my primary support system. Who had committed some of the most egregious acts of careerism I’d witnessed in Tinseltown? Me.

Maybe it was the city-issued safety vest and authority conferred by carrying a clipboard, but I felt a swell of affection, and a weight of responsibility, as it dawned: There was no longer a “back home” for me.

Since that night four years ago, some things have changed and some have remained the same. There’s been a 12.7 percent increase in homelessness in Los Angeles County and a 14.2 percent increase in the city of Los Angeles. Everywhere, there’s palpable frustration with elected officials and government agencies, as the pandemic has sent more people into the streets and housing prices just keep skyrocketing.

But I no longer wonder who they are, and why they don’t go “back home.” I know now that 70 percent of those experiencing homelessness have lived in the county for at least a decade, and two-thirds of unsheltered Angelenos became homeless while living here.

With average rents in my once-affordable old stomping grounds now topping $2,500, putting together a deposit, first, and last months’ rent, has become an insurmountable hurtle for many of us as gig work has made dependable wages harder to come by.

I’m also pretty certain that I made a misjudgment about that car.

That January night at the P.I.T. led me to volunteer in a Host Home program sponsored locally by Safe Place for Youth and open my house to a young couple experiencing homelessness. Prior to their month-long stay under my roof, my houseguests had been living in their car, which was much cleaner than my own reliably dusty ride.

Like many Angelenos, I remain frustrated with my powerlessness to effect change and with the lack of progress in solving the region’s housing crisis. But I can no longer pretend a transactional and transient relationship with my adopted hometown and the people who live here, including the unhoused. The annual P.I.T. was furloughed in 2020, and postponed this January. But it will take place again on February 22–24. I’ll be there, walking the streets in the dead of night, but I no longer think of the people I’m looking for as strangers—just neighbors I haven’t met yet.